I recently acquired a hat block of my very own!  It's so exciting.  I've been wanting one for ages, and I finally found one for a really good price on Etsy.  I have two or three hats in my collection that I plan to re-block soon.  But I also got excited after a recent American Duchess post about recycling old wool hats, and she mentioned that thrift stores are a good place to find them.

So a month ago I went to Goodwill to scope out the felt hat situation.  I found a couple, which I'll get to soon, but I also found this little number: 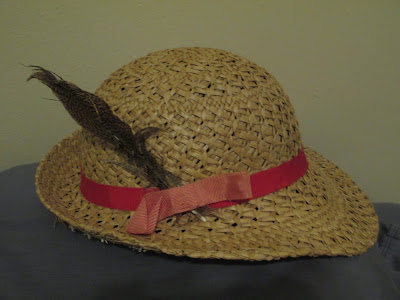 I felt bad for the poor ugly thing, so it came home with me and the two (equally sad) wool hats.  I could tell that, under the questionable decorations, it had good bones.  And I had been wanting a new Regency bonnet anyway.  I was getting sick of the two that I had.

So I set to work removing the (heavily) glued-on feather and ribbons: 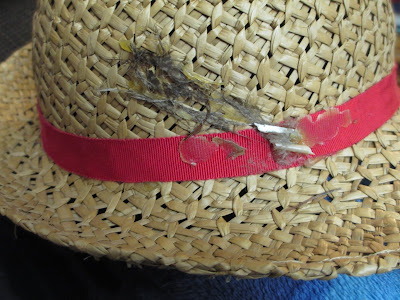 It was a messy process, but worth it in the end.

I wetted the straw base thoroughly, after all of the dried glue was removed: 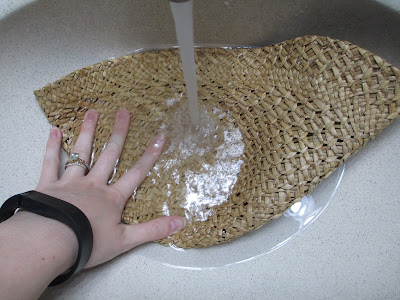 The hat was already a decent shape, with the front brim slightly wider than the back, so I felt confident that I could coax it into the form I was going for, and that I wouldn't need to change the shape by cutting it at all. 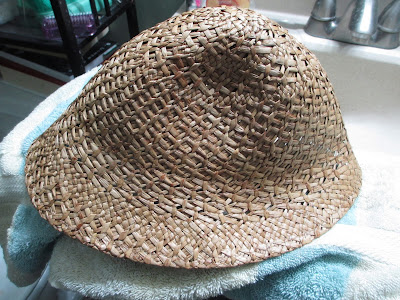 I wanted a simple, elegant straw capote like the one Marianne wears in Sense & Sensibility:

I started by stretching the wetted straw form onto the hat block: 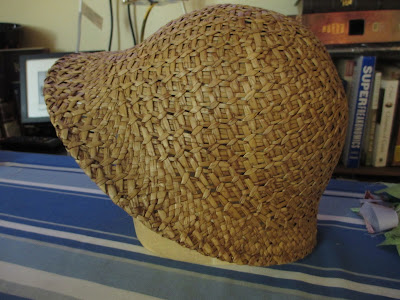 But I found that it was a bit too round, and I wanted a longer shape.  So I switched to an old ironing ham instead: 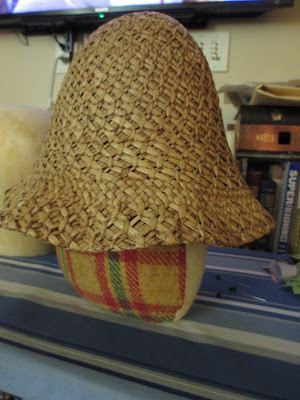 To elongate it more, I pulled and stretched it as much as I could, then held the crown in place with a large rubber band. 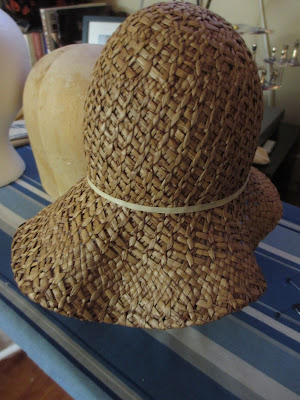 But I didn't want to let it dry this way, as I was afraid the rubber band would cause an unsightly crease.  So I removed it and smoothed out the brim as much as I could, then gave it a flip up at the back. 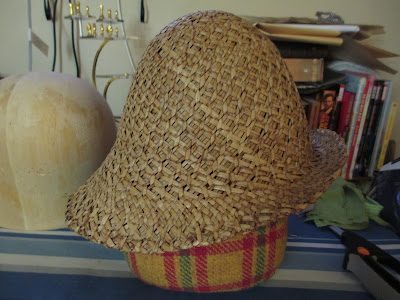 In order to make it more pronounced, I pinned the flipped-up brim to the ironing ham, and let it dry overnight that way. 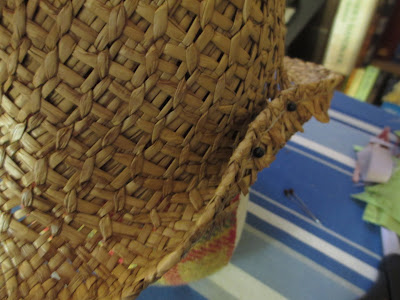 I wasn't happy with the underside of the brim, however.  I remembered seeing a Festive Attyre post on making a straw bonnet, and used that information to search Etsy for vintage straw braid.  I found this excellent store:  Vintage Ribbons and ordered a full hank of 1.5" wide natural beige millinery lace.

My thought was that I could follow Jen's tutorial for making another straw bonnet in the future, and in the meantime I can use a bit of this braid to cover the turned-under raw edge inside the brim.  I also bought a 2 yard remnant of another 1" wide straw braid in a dark pink color from the same seller, because why not?

I really like this braid.  I'm hoping that I have enough to make two full bonnets - then perhaps I can sell one. 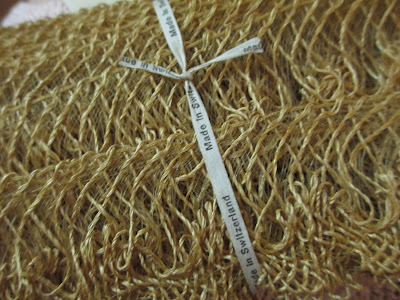 It was a beautiful color match to the original straw, and it covers the raw edge beautifully: 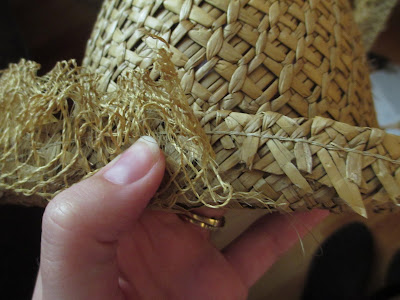 I stitched it on by hand - it took just over a yard to cover the entire brim.  I also stitched the back brim through all layers to the crown, to hold it in place permanently.  Then I added a yellow grosgrain ribbon, just tacked in place at the sides.  For final shaping, I tied and pinned the brim to the long edge of my ironing ham, and sprayed the edge with water. 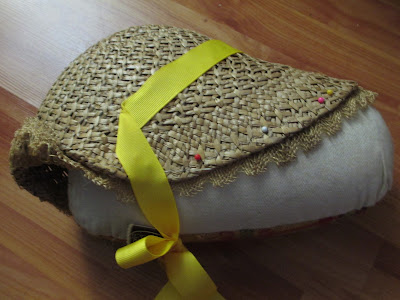 Once again letting it dry overnight, I tried it on the next day and was very pleased with the final shape! 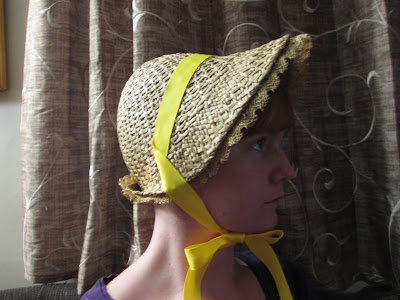 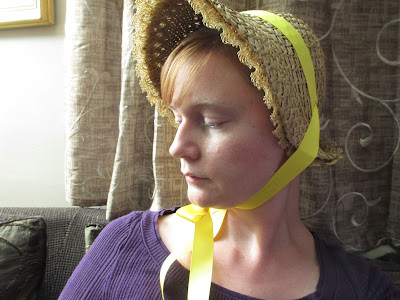 This may be my favorite bonnet for a while.  It combines the advantages of both of my previous bonnets, being comfortable to wear like my Green Straw Bonnet, but also neutral in color so it goes with anything like my Cream Striped Bonnet.  I can easily change out the ribbon to another color, or add whatever other embellishments I want.  I kind of like it plain, though, like the inspiration piece.
Posted by Chelsea at 4:16 PM