I made Brian the Engineer a second tailcoat for the Trafalgar Ball last October.  I wanted him to have a more formal one than the Blue Linen Tailcoat, and also a warmer version for winter events.  So this time I used black wool broadcloth from Burnley & Trowbridge.

At the time, I remember researching pre-shrink methods for wool, and I found and followed one which involved rolling the wool between layers of wet towels and allowing it to dry this way.  I cannot for the life of me find that link now, but I have found references to a similar technique called the London Shrink.  But that seems to be wetting the wool and wrapping it in sheets, whereas I distinctly remember this technique telling me to wet the towels instead of the wool.  Anyway, that's what I did. 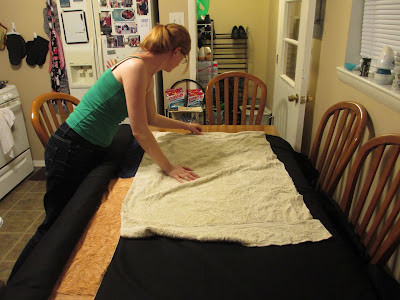 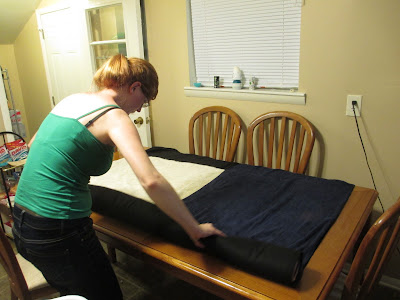 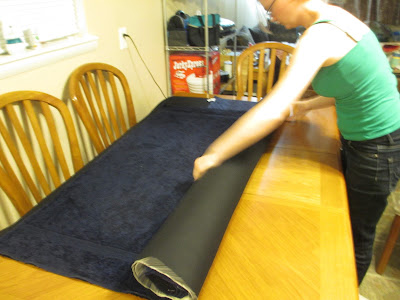 It seemed to have worked, although I didn't take before and after measurements of the fabric, so it's hard to be sure.  I think I also took the wool to work with me and used the industrial steam iron (man, I miss having access to that!) on it just in case.

And it looks like I took absolutely no in-progress pictures!  (I really need to be better about that.)  Which is a shame, since I significantly altered this coat from the original pattern.  Brian wanted a single-breasted tailcoat, which he said would be more comfortable for him to wear than the double-breasted style.  He actually requested the single-breasted style for his first coat, but I wanted to make it according to the pattern directions once first before I would feel comfortable altering it.

Fortunately the alteration was a fairly simple one.  I had him try on the mock-up again, and folded over the edge where I wanted the center front edges to meet.  This made for a much smaller lapel, but that was ok.  Then I just had to remember to make the same alteration to the front facing and interfacing pieces, and re-draw the lines for the pad-stitching.

The coat turned out really well, I think.  Here he is wearing it at last year's Trafalgar Ball:

Black is hard to photograph, so some of these pictures have flash, which washes me out nicely: 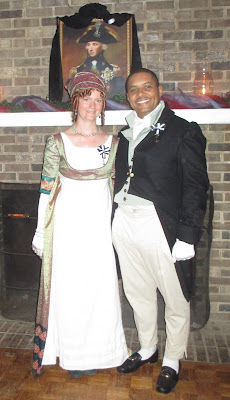 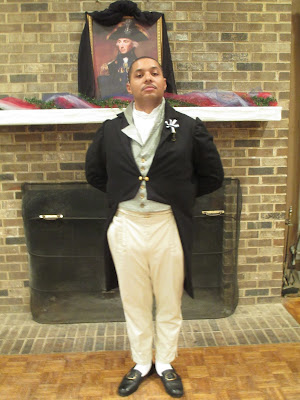 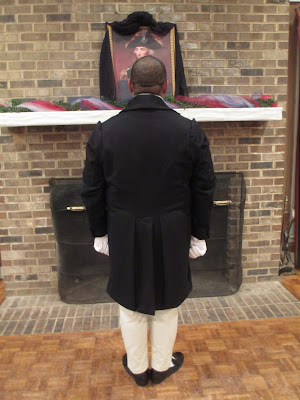 Not the greatest picture, but it does show the back seams nicely: 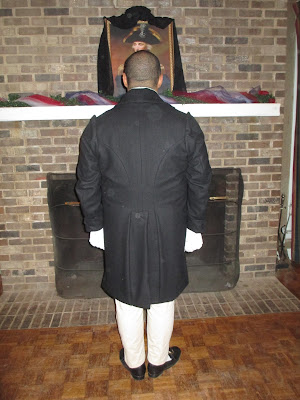 It also shows the fact that I skipped adding the pockets to the tails because I didn't have time!  I was still working on some part of his ball ensemble or mine (I can't remember which) in the car on the way there.

I also skipped sleeve linings, cuff buttons, and the buttons at the back seams, but those issues have since been fixed, at least!  I actually removed the sleeves, shortened them, added the linings, and finally finished the cuff buttons and buttonholes just in time for THIS year's ball:

The sleeve lining is dark blue linen, which makes the coat much easier to get on and off.  And he says the sleeves are much more comfortable now at the proper length.  And, you know, without safety pins.  :p

I'll share more photos of the ball soon.  And if you want to see more pictures of Brian with the polar bear, check out my post of last year's ball:  We Party Like It's 1805
Posted by Chelsea at 11:36 AM