A New Bonnet (in the works)

So, my parents are coming to visit me next month!  :D  We'll be hitting up Colonial Williamsburg, of course, but then I also had the brilliant idea to take my mom along to a Regency Society of Virginia event so we can dress up together!  I may have even orchestrated just such an event for that very purpose...  ;)  We will be attending a Ladies' Tea at the Victorian Station in Hampton.  You can buy tickets up until October 1, if you're interesting in joining us.

But!  Now that we have an event to attend, I need to make sure my mom is fully outfitted in Regency raiment.  I have a dress she can wear, as we're basically the same size, and I have shoes and stockings she can borrow.  I do not, however, have more than one bonnet.  Clearly, this needs to change.


After I had located my buckram (not a simple task, as all my sewing supplies have been shuffled around a lot between two moves in five months) I set out to draft a pattern.  I had a very small amount of a gorgeous cream-on-cream striped upholstery fabric left over from something very fabulous that someone else made.  I also have scraps of 2" wide double-sided satin ribbon in a darker cream, which I will use for trim. 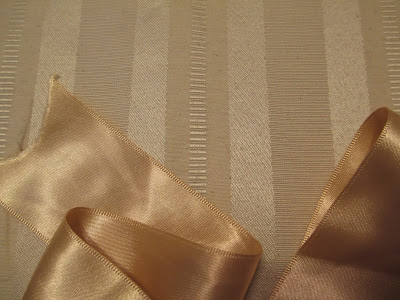 I like the idea of a very neutral bonnet that I can wear with any outfit, accessorizing it with flowers to match what I'm wearing.  My first bonnet is somewhat limiting, both in color palette and in further adornment possibilities.  I'm going for something very different this time.  I wanted something structured, like the almost stove-pipe crowns in the reference image above.  I was also inspired by this beautiful thing:

It's very close in both shape and color scheme to what I envision my finished product will be.  It even has the subtle stripe in the base, although mine will be quite a bit bolder.

I had originally planned on using Butterick 5265 as a starting point and altering the shape from there, but this turned out to be a complete bust. 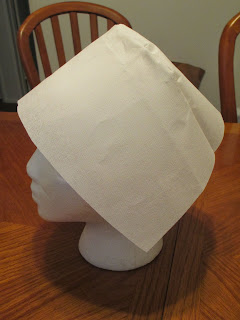 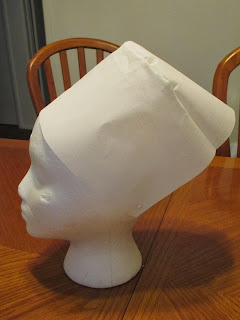 Even with it pinned to the head I could tell this was just not going to work.  I needed to create a cylinder for the crown, so I went to my fabric, which looked like this: 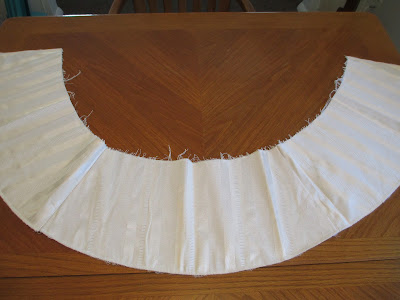 I had three equal cut pieces sewn together, forming an arc.  Fortunately each segment was cut with the same stripe motif centered and on the grain.  I used one as a guide to cut the largest, longest rectangle I could get all on one piece - out of the buckram.  Pinning it together to form a cylinder, I traced around a bowl to get a circle slightly larger than the what the end of the cylinder was creating, to account for seam allowance.  For the brim, I traced one of the fabric sections in its entirety.  Trimming away the bottom of the front of the cylinder, I came up with this shape: 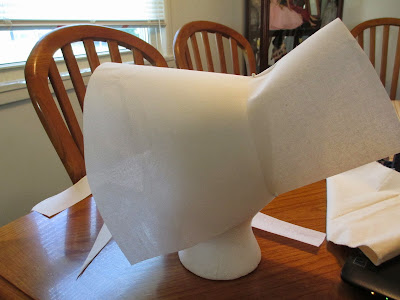 A good start, but I wanted to crown to sit higher on the head, and the brim was a bit much.  I cut both pieces down and trimmed away the square-ish corners of the brim to get a more pleasing shape.  I also played around with the ribbon, testing out my trim idea. 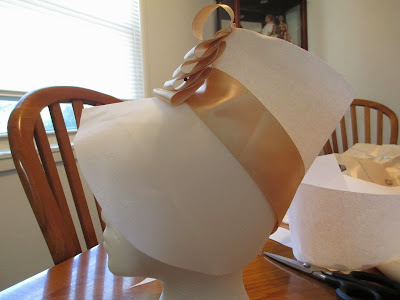 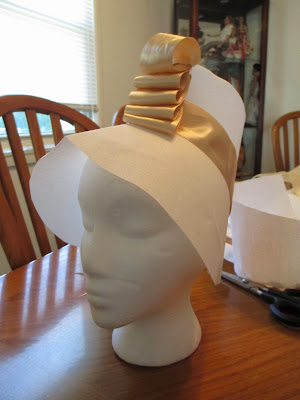 This may or may not be the finished trim look.  I did make the decision to have the seam of the crown at the front, so it will need to be hidden by trim of some sort.  But now that I had the shape settled, it was time to cut out my fashion fabric.  I pinned it to the buckram pieces and set them up on the head again to get an idea of the final look. 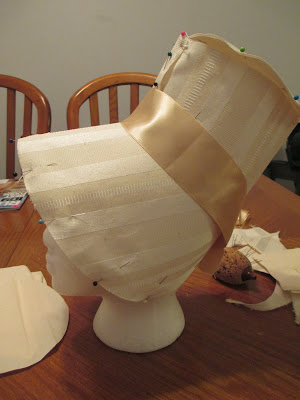 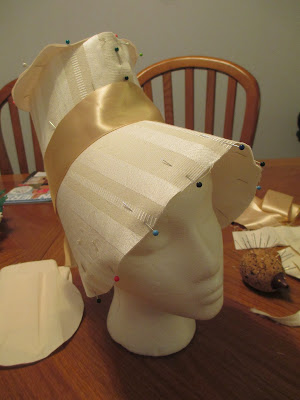 The stripes actually matched up better than I anticipated!  Now I need to baste the layers together, sew the frame, sew the lining, assemble, and trim!  Piece of cake, right?  (I also played around a bit with some silk flowers on the buckram frame, and those photos can be seen on my Facebook page.)

This will be my entry for the Accessorizing Head-to-Toe Challenge, when it's finished.  And, bonus - I have enough of the striped fabric left to make a matching reticule!  I'm actually designing it based on the shapes of the scraps, which is one of my favorite things to do.  So look for a blog post on that coming soon!