This was a fun project.  I had promised Brian the Engineer that he would get a new waistcoat for the RSV's second annual Trafalgar Ball, so back in August I was showing him the various fabrics I had set aside for waistcoats.  I had several options in stripes and brocades, and he liked a couple of them.  I also showed him some velvets, not really expecting him to be thrilled with the idea of wearing velvet.  As expected, he was kind of "meh" until I mentioned that I also had some royal purple velvet in my stash...  Suddenly he was VERY enthusiastic, and wanted to see it!

I went and fetched it from my sewing room (it wasn't with the other waistcoat fabric options because I hadn't been considering it for a waistcoat - and I wasn't sure there was enough!) and he said, "Yes.  That is my new waistcoat."  Well, ok then.

I washed the velvet gently in the sink with Woolite, and laid it out to dry over some towels on the guest bed.  While it was drying I discussed style and button options with Brian.  I had used Kannik's Korner #4202 previously: 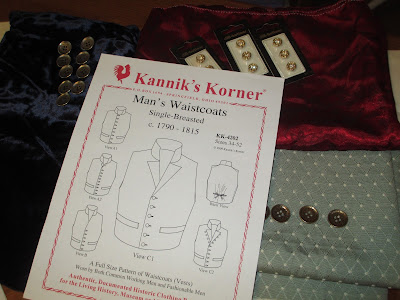 We decided to go with View B this time, without lapels.  And Brian wanted fancy gold buttons, so I ended up stealing them from his Blue Linen Tailcoat - but I had been wanting to replace those with self-fabric covered buttons anyway.

The project got put on the back burner for a couple months, during which time I stored the clean velvet folded on a shelf.  So when I picked it back up again, it needed to be pressed.

Not owning a needleboard, I used the next best thing for pressing velvet - a towel!  This worked beautifully, as the terrycloth fibers allowed the pile of the velvet to sink in and avoid getting crushed by the iron as I pressed on the back side of the fabric.

I cut out the lining first (from 100% linen I was lucky enough to find at JoAnn's) so that I could lay out both front pieces together to get the best use of the fabric.  It was a good thing we had already decided to forgo the lapels, because there was just barely enough fabric as it was!

I had to fudge the grainlines a bit to make the pieces fit.  And I carefully avoided the once-sewn bust darts and the questionable armpit area: 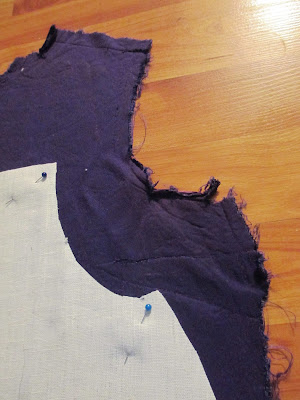 I was actually very grateful that the pattern directions are specifically hand-sewing instructions, as I've had a miserable time in the past trying to sew velvet by machine.  Putting this waistcoat together by hand was MUCH easier!  (Not actually easy, you understand.  Just relatively easy.  :p)

I backed the welt pieces with the same interfacing I used in the collar, to give them a bit of body.  This velvet was rather flimsy and floppy to work with, so that helped a great deal.

And here's the finished waistcoat: 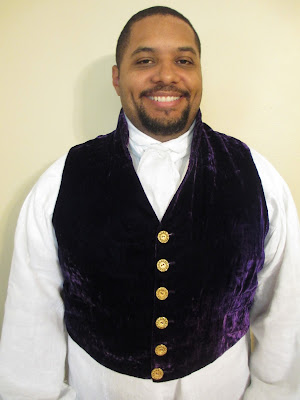 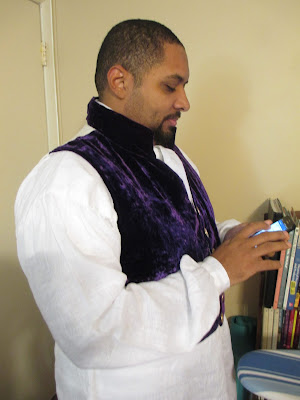 Velvet is so tricky to photograph - and purple velvet even more so!  I've found that purple is one of the most difficult colors when it comes to photography.  It never seems to want to show up as the same color as it looks in real life.

One of the welts gave me a lot of trouble when I was stitching down the sides.  It kept shifting on me, no matter how many pins I used to keep it in place!  I had to seamrip and re-sew one end three times! 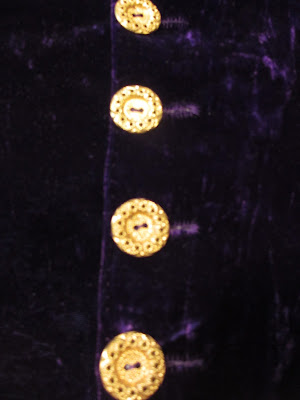 Close-up of one of the hand-sewn buttonholes: 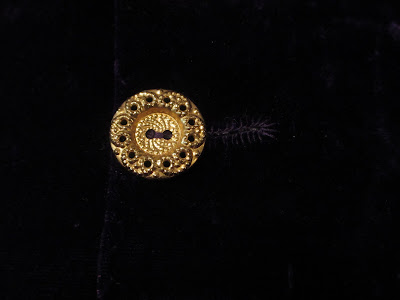 And here's Brian the Engineer proudly wearing it with his Black Wool Tailcoat (and new linen cravat) at the Trafalgar Victory Ball in October: 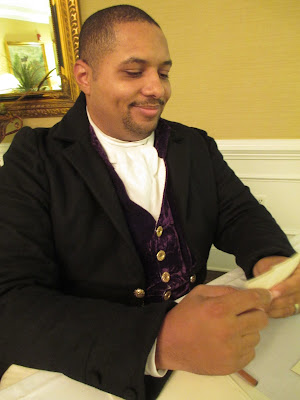 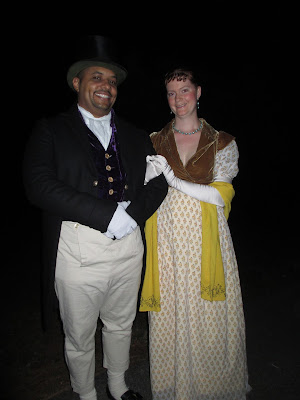 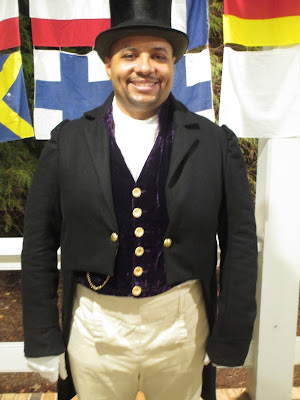 The linen cravat replaces the silk scarf that we had been using for his neckwear: 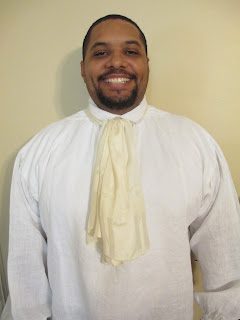 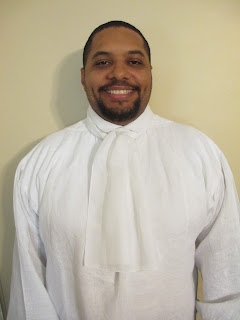 The scarf is 18 1/2" wide by 47 1/2" long, which is not long enough for a properly-tied cravat.  I made the linen one 9 1/2" wide by 75" long, and it works much better.  Start with the center of the length at the front of the neck, bring the two ends around and back to the front, tie a loose knot, and fluff out one end to cover the knot. 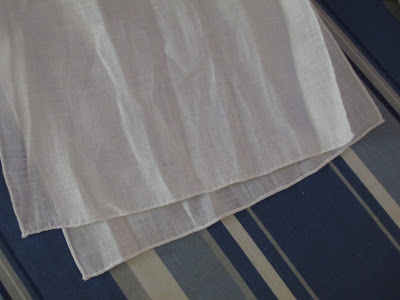 I hemmed the cravat with a hand-rolled hem.  It took forever!  But it's a fun technique, so I enjoyed it. 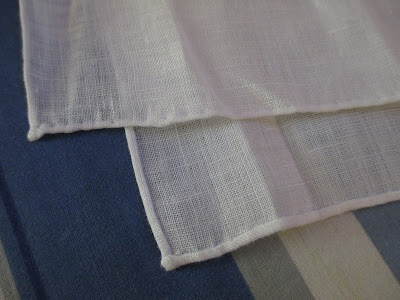