This was my ballgown for last year's Trafalgar Ball, and I never blogged about it!  I suppose I was in my usual rush to get the new garment finished before the event, even though I had been planning/designing it for over a year.

These pictures are from August of 2013: 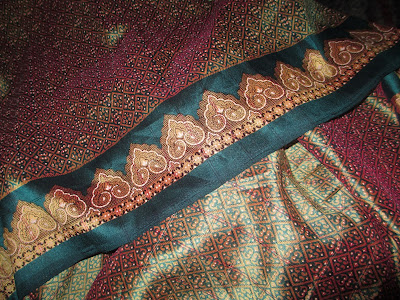 I started with scraps of a sari that was my sister's many years ago - our aunt who was in the Navy at the time gave each of us three girls a sari's length of fabric from Bahrain, and my mom made us Christmas dresses from them.  Gretchen was kind enough to bequeath the extra material from her dress to me, and it languished in my stash for years and years.  I was waiting for the right project, I think.

The remaining fabric consisted of one piece that was 1 yd 22" by the full width of the fabric, plus one border edge that was 2yds 14" by 16" wide.  There were many other smaller scraps and pieces as well, but these were to become my main pieces for the gown.

I experimented with the design by draping it on my dress form over my Blue Day Dress: 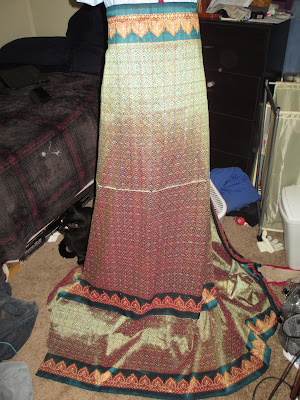 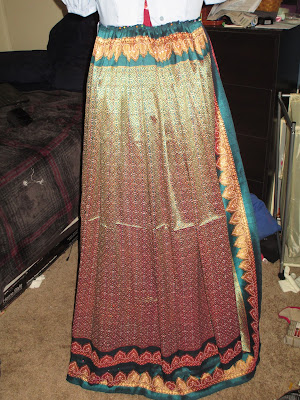 The full width of the fabric, which had the border on both sides, was unfortunately not quite long enough to reach from the high waist to the floor.  So I played with adding part or all of the long border piece to make it longer.  With just the 4" border added, it was the perfect length.  But I also considered giving it a train, using the full 17" width.

But like I said, that was over a year before I actually made the gown.  My final design is closest to the first option above, but I decided I didn't like the border at the top of the skirt.  Plus, odd numbers are more aesthetically pleasing, so I cut the border off one side and added it to the other, then added the third border from the longer piece. 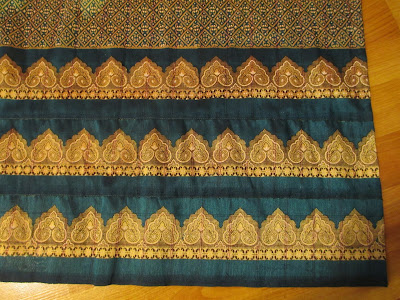 I drafted a pattern for the bodice based on the La Mode Bagatelle cross-front bodice, re-shaping the front to scoop down under the bust.  I also extended the tabs to overlap a good amount: 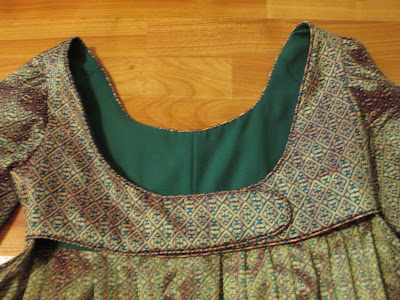 (No in-progress shots, unfortunately.)  I had to compromise a bit when it came to the sleeves, because I cut them from the same 17" wide border piece that I used to add length to the skirt.  (This same piece also yielded the long narrow strip that I used for piping the bodice.)  But when the skirt was lengthened, I had very little left of the border with which to make the sleeves.  I had wanted the sleeves to be as long as possible, with the border at the lower edge.  I had to keep them above elbow-length because they are too narrow to allow my arms to bend.  I was very nervous that they would inhibit arm movement anyway, but they proved to be ok to wear. 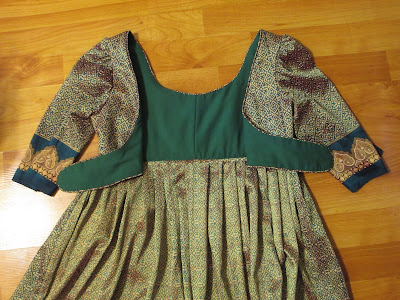 I made a mockup of the bodice out of scraps from the same old sheet I used to make my 18th Century Green Swallowtail Jacket.  This then became the lining.  The seam at the center back of the lining shows that I took it in before using it as a pattern to cut out the fashion fabric. 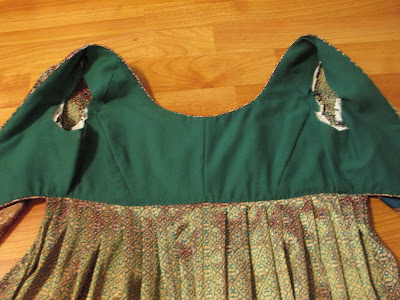 The lining was sewn together by machine, then hastily stitched into the interior by hand (after everything else was done). 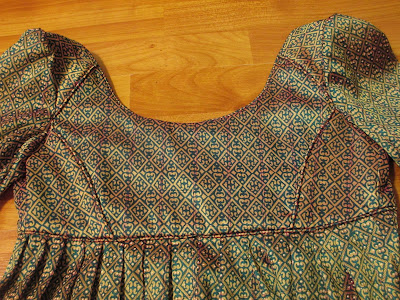 I really love how the piped seams in the back turned out - but they gave me fits when I was making it!  I had cut out the bodice pieces according to the mockup, but when I sewed the piped seams and tried it on, the side back seams didn't lay flat.  They sort of puffed out along the curve, so I had to pinch out the excess and move the piping as I took them in.  It was tedious, but the results were good. 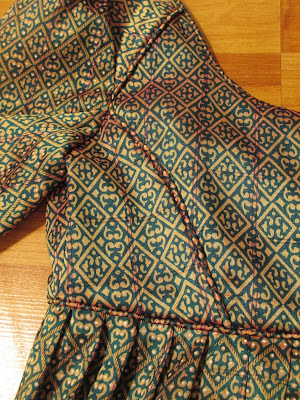 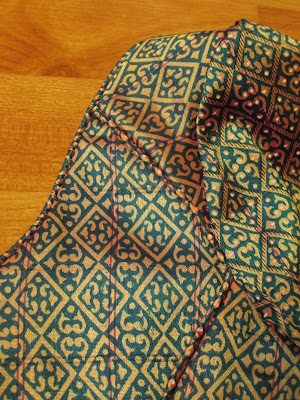 I did have to make a small adjustment even after I corrected those seams, though.  There was a bit of excess at the waist, and I took it in with a small dart under the arm:

Oh, I forgot to mention I flat-lined the bodice with plain cotton muslin, to give it some body.  You can see it here on this interior shot of the underarm dart: 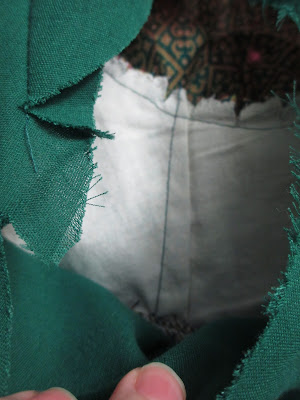 The lining did not need as big an adjustment, so I just folded in the excess at the waist, and left the armhole free.  I might someday finish the interior, but there was no time and it was wearable. 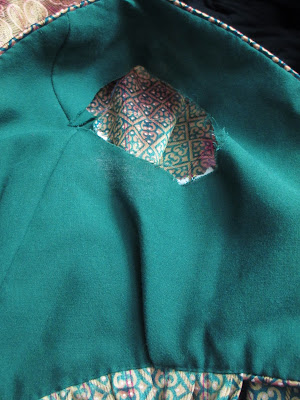 I piped the neckline edge, around the tabs, and along the waistline with one long piece of piping, with the two ends meeting at the center back of the waist: 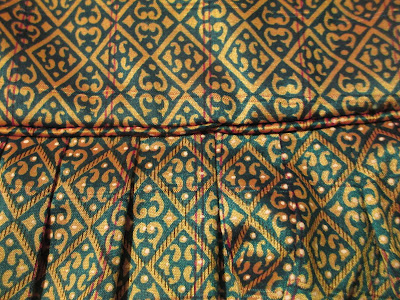 Then I pleated the skirt to fit the sides and back of the bodice, matching up the knife pleats to create one inverted box pleat at center back.

You may notice that the bodice and skirt fabrics look slightly different - the skirt (and sleeves) fabric has little white dots that the bodice lacks.  I did not notice this myself until the gown was nearly finished!  It's not the wrong side of the fabric, as you might suspect.  The wrong side is very obviously "wrong," as you can see here: 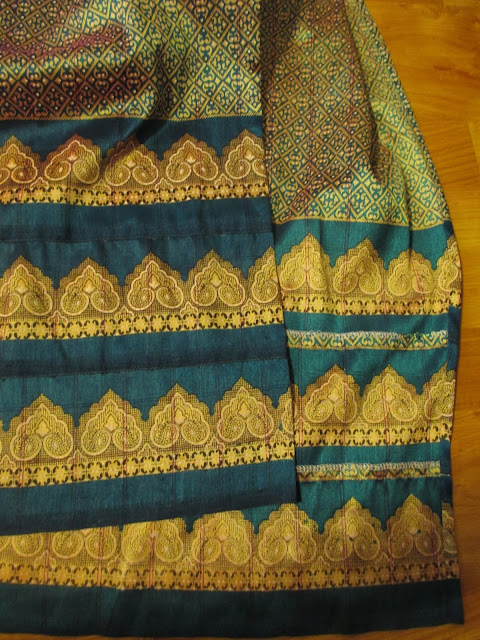 But the fabric I used for the bodice is just as vibrant in design as the skirt and sleeves, so I concluded that the scrap piece I cut it from must have been from a different part of the sari.  It wasn't a design choice, but I kind of like it.

I did not have time before the ball to make the covered buttons that I wanted to add to the tabs, so I just safety-pinned them closed.  And although I have since worn this gown two other times, I still haven't added them.

Another thing I'd like to do before I wear it again is finish the interior seams at the skirt border more thoroughly.  For one thing, I didn't like how the seams (which I had overlocked in white thread on my serger because I'm lazy) showed very obviously if I lifted out my skirt:

And another problem that three wearings has shown me is that the serger threads tend to get caught on things: 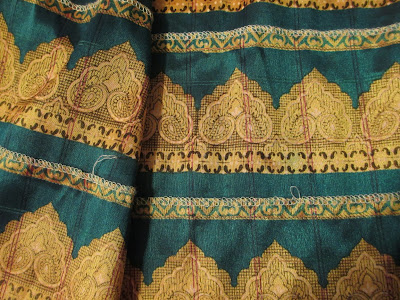 I think the best solution is to find ribbon or seam binding that matches the dark teal green of the border, and hand-stitch it over the interior seams.  So far I haven't found a good match.

But I did find a good match with my shoes!

For the Trafalgar Ball, I used what was left of that long piece (after I cut off the border to add to the skirt) to drape a VERY makeshift turban.  I had wanted to hem the entire length, but that idea went out the window when I ran out of time to do everything else I wanted to do to the gown (beyond making it wearable for one night).  So instead I folded both of the long raw edges in to the center, then folded this in half so the folded edges met.  This successfully hid the raw edges and kept them from fraying further.  I draped, twisted, and tucked the length on and around my head, holding it in place with a few bobby pins and at least two safety pins.  I'll never be able to reproduce that particular arrangement, but it at least did not fall off while I was dancing! 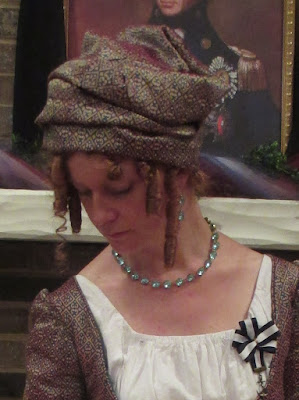 Though it slightly looks like it's falling off at the back: 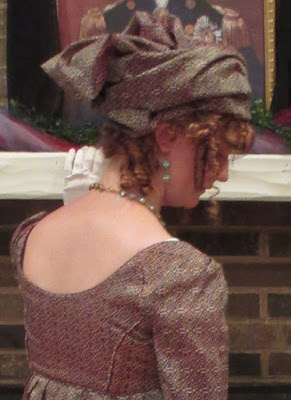 The second time I wore the Open Robe, for the RSV Twelfth Night Dinner in January, I simplified my headwear: 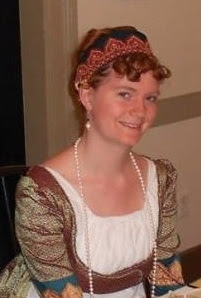 From some of the smaller scraps I was able to get two 18" lengths of the border, 5" wide.  I seamed them together in the middle, between two of the scalloped motifs. 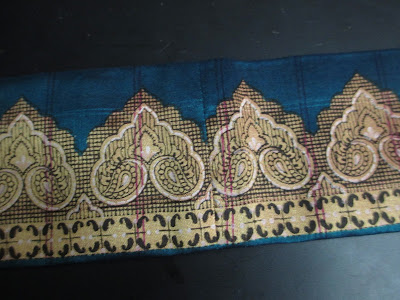 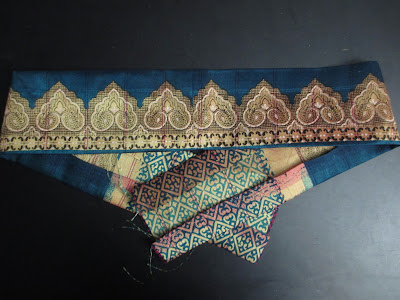 Then I pressed under an inch on each long edge, wrapped it around my head, tied it in a loose knot, and secured it in the back with a bobby pin. 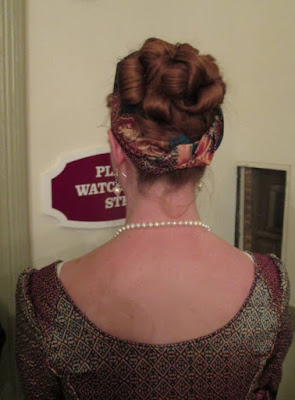 Not the neatest bandeau, but it worked.  Someday I'll finish that, too.  Also someday, I'll make a reticule from some of the smaller scraps - these are left from the fancy border end of the sari: 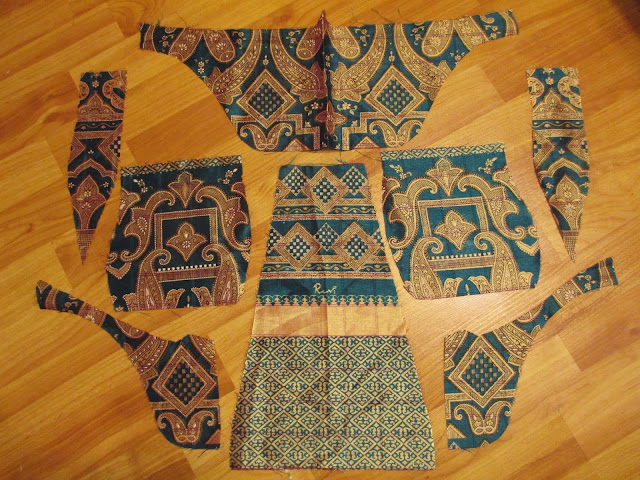 I've always had a problem with throwing away even the smallest scrap of really pretty fabric.  I'll often hold onto pieces for many years before I find the perfect project for them.  But I'm glad I kept this sari fabric, because this gown is one of my favorite historical costuming pieces I have ever made.
Posted by Chelsea at 9:38 AM