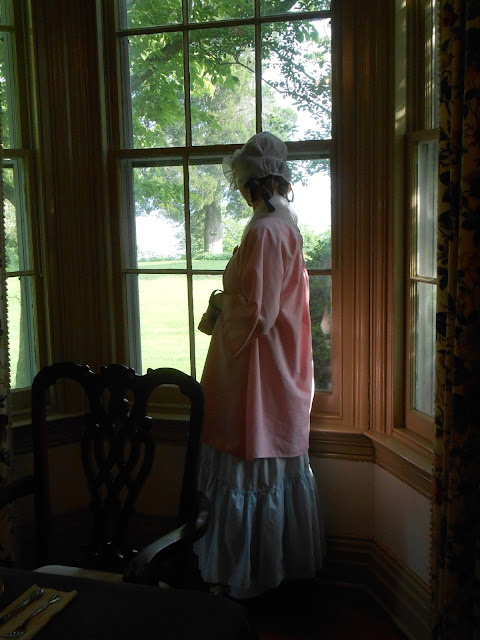 *happy sigh*  It was so lovely to stay in such a beautiful house on such lovely grounds, and to wake up each morning to a magnificent view of the river out of any given window at the back of the house.

I had dressed for the day in my classic white Apron-Front Gown, my first sheer dotted chemisette, new shoe clips for my Pemberlies, and the same cameo brooch from Friday with a green brocade ribbon sash. 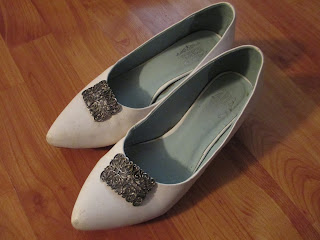 When I needed a break from constant sewing, I joined a group of ladies who were busily writing letters in the dining room.  I had brought along my new writing desk and pen, so I took the opportunity to write a letter to my sister. 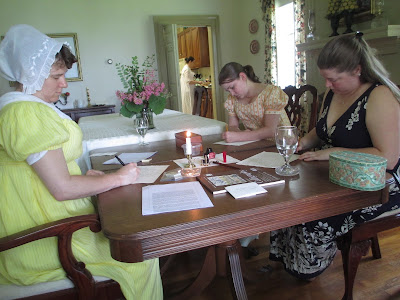 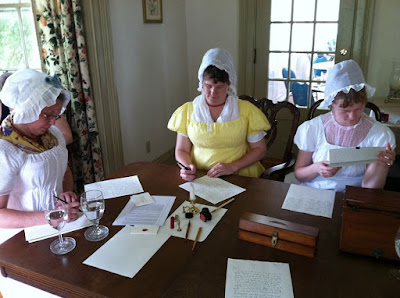 And then it was back to sewing.  This dress was not going to sew itself! 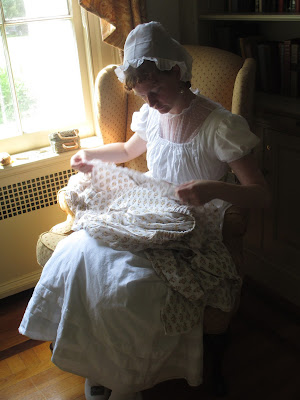 It was incredibly hot and humid on Saturday, so we spent the day largely indoors.  We had wanted to have a picnic on the lovely grounds, but it would have been miserable.  Somebody had the bright idea to have it anyway, just inside on the floor!  So that's what we did.  :)

After our parlor picnic - guess what I did?

When I finally got to a point where I could try it on, I had to change.  I wanted my new dress to fit over my new bodiced petticoat, so I needed to put that on first.  Unfortunately changing in and out of Regency clothing can be a bit of an ordeal.  :p  But I found someone to help me, and got the bodice fitted.  Then I continued to sew for a while in my undergarments.  I believe at this point I was adding the buttons.

After I tried it on again and got the hem pinned, I took another break from sewing and changed back into my white dress again for a quick archery lesson outside in the sweltering heat.  Stacy was kind enough to teach me how to use her longbow, and to take these pictures for me: 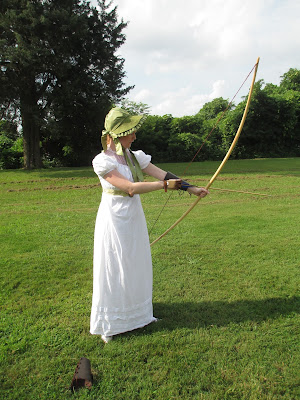 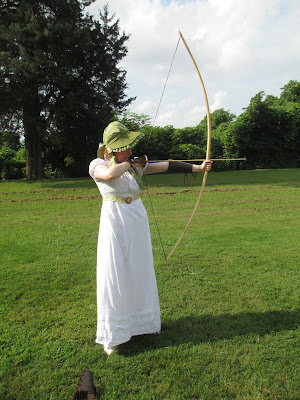 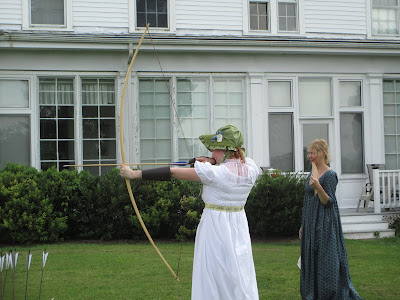 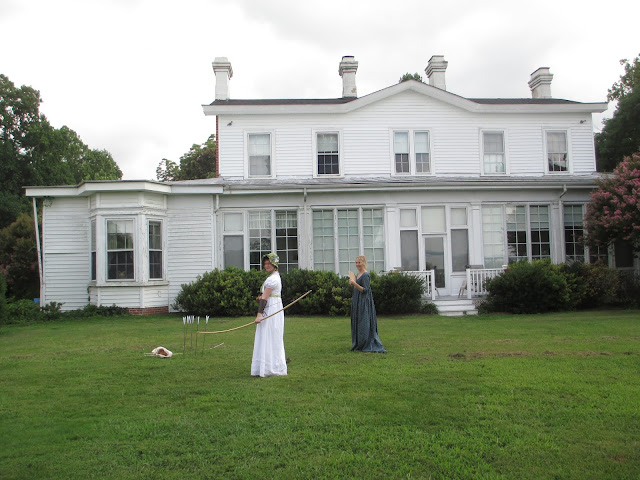 I shot a total of eight arrows, one of which hit the target, two others hit the stump behind the target and bounced off, and the rest hit the grass and probably startled some poor worms.  :p  But it was much too hot to continue the exertion, so we retired again to the library and had another Horatio Hornblower viewing party!  I continued sewing until it was time to dress for dinner.

Are you sensing a theme to this post?  :p

For dinner, I wore my Green Sari Open Robe over the Apron-Front Gown.  I left off the chemisette, and switched the shoe clips to my Chelsea green flats. 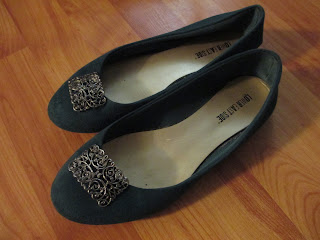 Probably my favorite part of my evening ensemble would have to be my new turban.

I bought the turban - along with the fabrics for both my Yellow Sprigged Dress and my pink bedgown, my new shoe clips, and the cameo and rhinestone brooches I wore throughout the weekend - from Julie Rockhold's recent sale.  The turban was made by Julia Nelson, who I know nothing about.  :p  But isn't it lovely?

These are Bonnie's photos of my awesome turban: 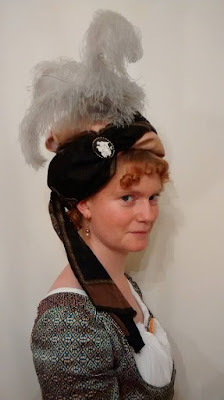 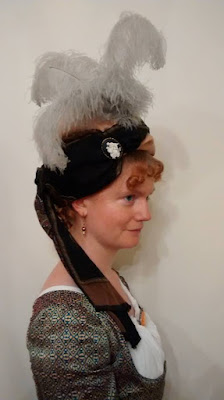 And she was kind enough to take these for me on my camera: 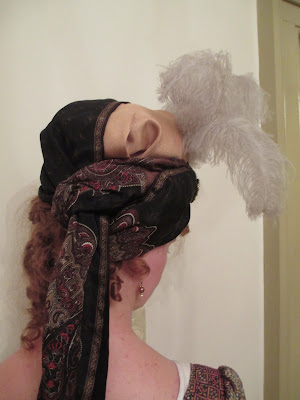 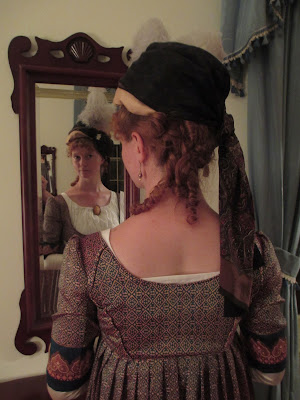 Dinner was - once again - delicious!  We had beef prime rib, roasted potatoes, carrots cooked in the Dutch fashion (which according to Kimberly means "with lots of butter!"), stuffing balls, squash pudding, rolls, and lemon cream for dessert.

After dinner there were more games of Whist, but it was my turn to help with kitchen cleanup.  Then several people changed into comfy clothes for more Hornblower, and in my case - you guessed it...

When I finally finished my dress, it was nearly midnight.  But since we were leaving in the morning, I had to seize one last opportunity to write a letter by candlelight to my darling husband who was missing me all weekend. 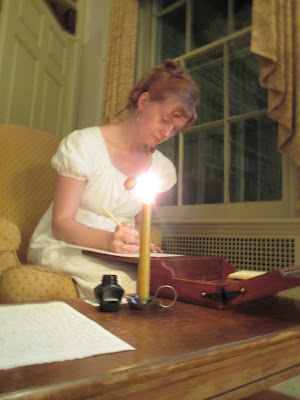 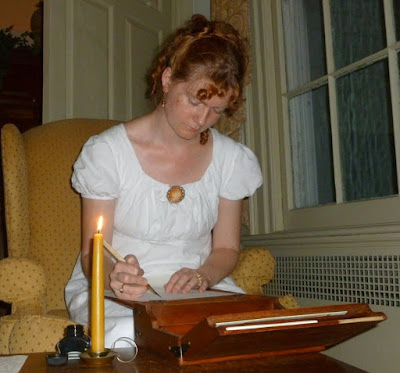 Then I dragged my weary (but happy) self off to bed.  I never wanted this fantastic weekend to end!
Posted by Chelsea at 9:34 PM No comments: 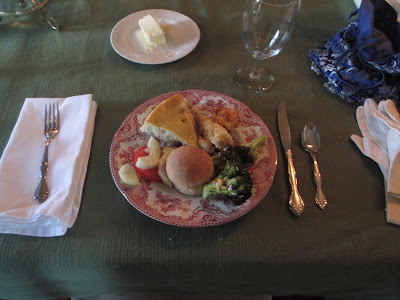 
I took a quick shower, then rejoined the library party to brush out my hair and put it all up in rag curls.  It was very late by the time we went to bed, but I honestly could not tell you what time it was because I do not have a period-accurate watch.  :p
Posted by Chelsea at 6:28 PM No comments: