I recently had the idea to make hair pieces for myself out of my own hair.  I've been saving the shed strands from my hairbrush to make hair rats for several months now, but I decided to go one step further.  I needed a haircut anyway, and I thought what better use for the strands I would lose than making pre-curled, ready-to-wear resuable hairpieces?  Thus began the Great Experiment!  If I'm successful, I should be able to quickly and easily (after some practice) create elaborate 18th-19th Century hairstyles.

To start with, my hair was very long. 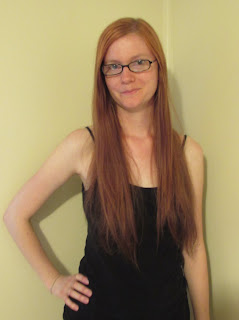 Not the longest it's ever been - in high school I could almost sit on it - but long enough to annoy me.  I was willing to part with up to eight inches for the sake of this endeavor, and I decided to cut it myself rather than try to explain to a hair stylist what I wanted to accomplish.
Read more »
Posted by Chelsea at 8:51 AM 2 comments: 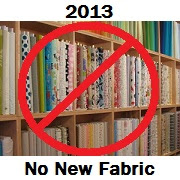 July was kind of... meh, as far as costuming goes.  I didn't do much, yet I somehow still have a backlog of posts waiting to be written!  I shall work on those soon.

Way back in January when I first planned out my year of costuming goals, I decided to make an 1813-era apron-front gown for the first challenge of the Historical Sew Fortnightly.  I got it halfway done!  Then it lay abandoned for nearly five months... 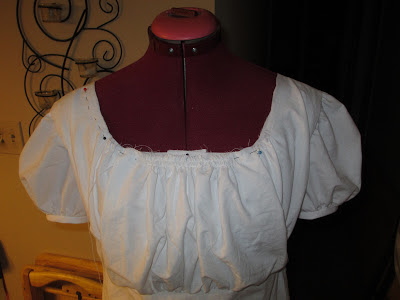 I finally finished it in time for the Victory Ball on June 22.