Sunday, our last day, was bittersweet.  We had a hard time leaving this beautiful house.

We had to check out of the retreat center by 10:30 AM, so we only had time for breakfast and some group photos.  I had done so much work on my new dress that I was determined to wear it and get some pictures before we left the manor.

(Sorry this post took so long - I started it ages ago and got stuck and never came back to it.)

Before I can talk about the dress, I have to discuss my underthings.  I made the chemise back in June, and started on the bodiced petticoat the week before the retreat.  I was still finishing it up on Thursday before I left for the retreat. 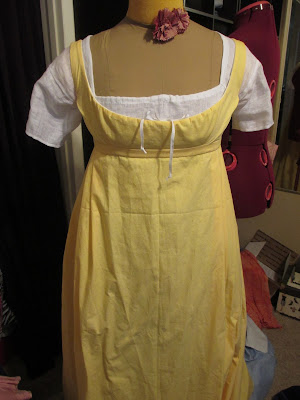 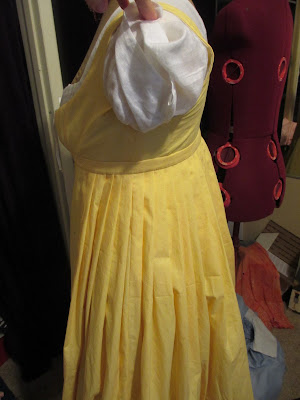 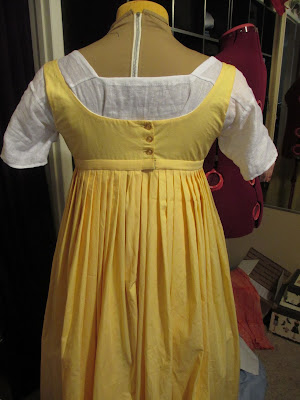 I used the pattern from La Mode Bagatelle, but instead of cutting out the pattern pieces for the skirt I simply divided the remaining yardage (after cutting out the bodice) into three equal lengths and made a tube using the full width of the fabric.  Then I pleated the sides and back into the waistband. 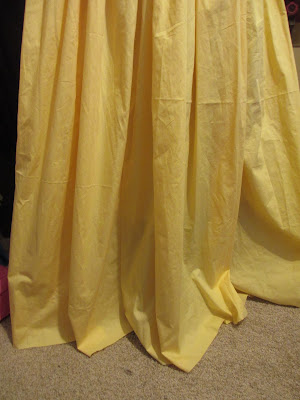 The skirt was too long, which I had anticipated.  I took up the extra length with three narrow tucks. 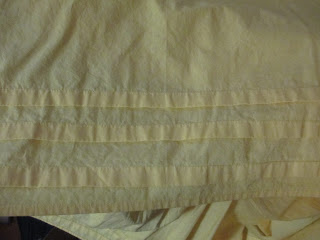 Now I could finally start on the dress!  I had been itching to get started working with this fabric ever since I bought it from Julie back in June.  It's so lovely and lightweight, with a bit of sheerness: 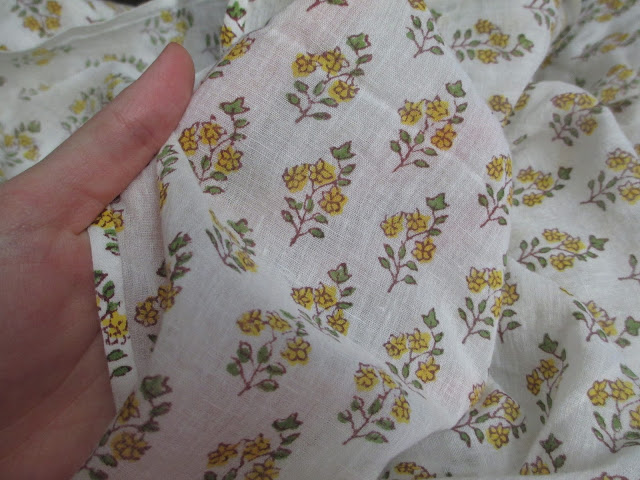 One interesting thing I discovered when it arrived is that the design must have been printed after the fabric was cut.  Here is one edge: 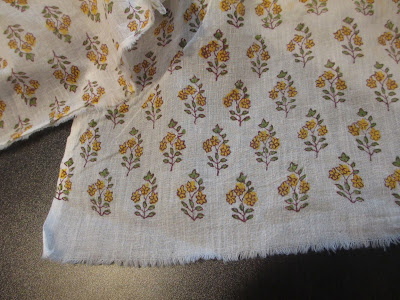 And the other edge shows signs of having been wrinkled when it was printed: 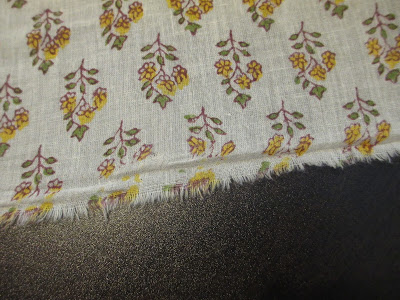 I found it fascinating.  Anyway, I serged the raw edges and washed and ironed it, as I always do. 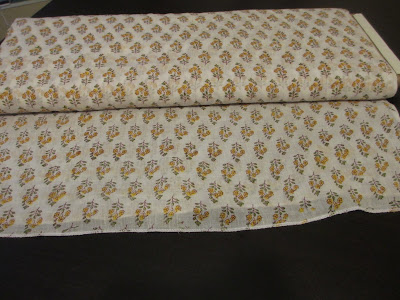 Having already had success with La Mode Bagatelle, I used it again.  I chose the cross-front bodice with the short sleeve option.  I meant to take a picture of my pattern laid out before I cut it but forgot.  So here are all the pieces in approximately the positions they were in before cutting: 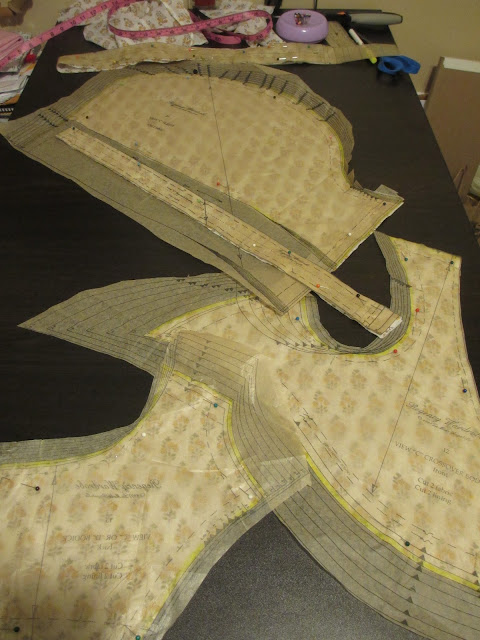 I disobeyed the grainlines on the pattern for the bodice front, setting the neck edge along the straight of grain rather than the bias. 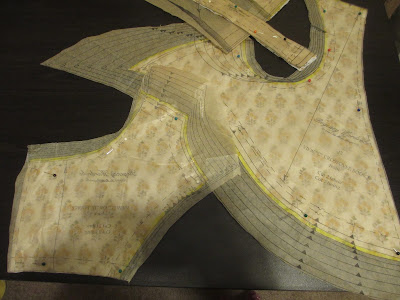 This was because I did not plan to line the dress, and I didn't want to allow the neckline to stretch out.  So instead of using the bias strip as a drawstring casing, I used it to bind the neckline edge the same way I did on my first sheer Regency dress. 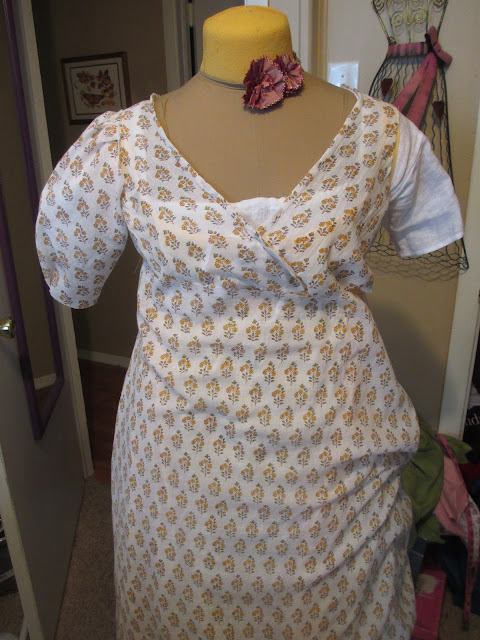 This is as far as I had gotten before I left for the retreat.  I sewed the bodice pieces together and attached the bias strips by machine.  Here the bias is folded over and pinned down, and the sleeve is pleated and pinned in place. 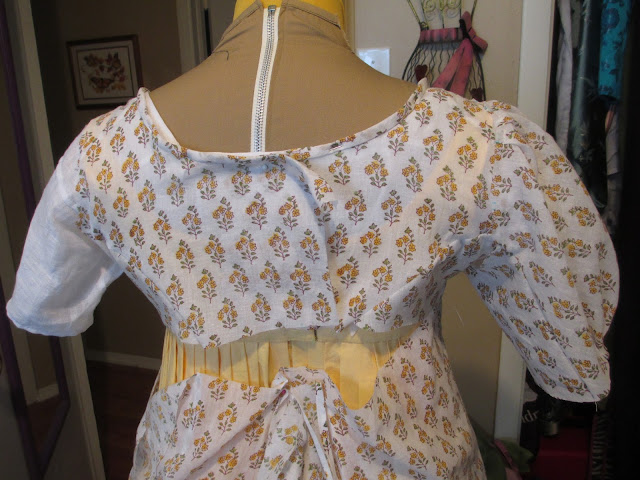 I wasn't bringing a sewing machine with me to the retreat, so I got as much as I could done before leaving.  The last thing I did was sew up the panels for the skirt, which I had made in the same manner as the bodiced petticoat.  Then I packed everything up and made sure I had my thimble in my sewing kit!

So in case you were wondering why I spent so much time at the retreat sewing, that's why.  I didn't get any more in-progress shots of the dress itself, but several people took pictures of me sewing!

It was many hours of hand-sewing. With the sheerness of the fabric and the lack of lining, I had to flat-fell all of the bodice seams by hand.  Fortunately, since I had cut panels of the full width of the fabric for the skirt, I left the selvedges at the seam allowances.  This cut down on a LOT of flat-felling!

I had much help with fittings, with so many other sewists in the house.  My roommate Jenny helped me re-set the side back seams to fit me better, Jillian marked the buttonholes for me, and Megan helped me mark the hem!  I hand-tacked the bias binding on the inside of the bodice, set in the sleeves (which I also bound with bias), attached the waistband to the bodice, and pleated the skirt into the waistband.  Here I hit a snag, because when I tried it on it fit really loosely in the waist.  I realized that the fabric must have stretched as I was sewing, which is hardly surprising as it is a rather loose weave.

My solution was to add twill tape to the inside of the waistband to create a casing. 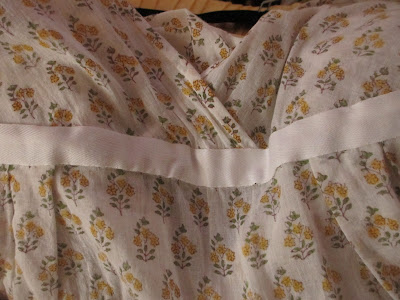 On the left side I folded over the edge of the twill tape to create an opening for the drawstring just inside the buttonhole. 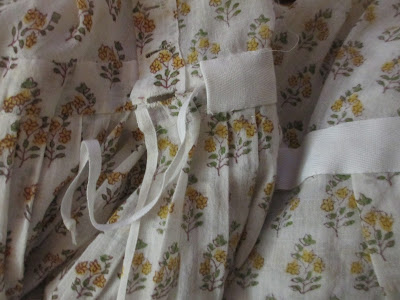 On the right side I attached it all the way to the edge, and cut a buttonhole a couple inches in from the edge for the other opening for the string. 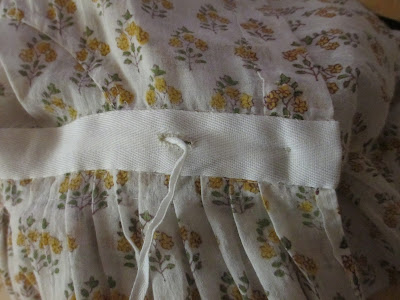 Now the drawstring pulls in the slack at the waist, and it buttons snugly in the back.  I hemmed it, and it was finally done!  I'm pretty sure I finished it right at midnight Saturday night.

So here we are Sunday morning, and I'm wearing my dress!  You can see how the bodiced petticoat is very necessary with this dress. 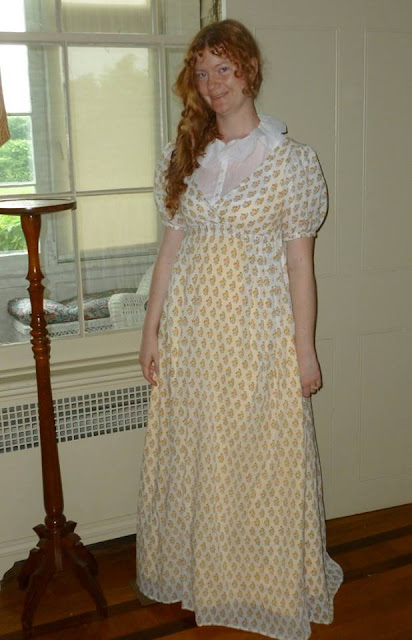 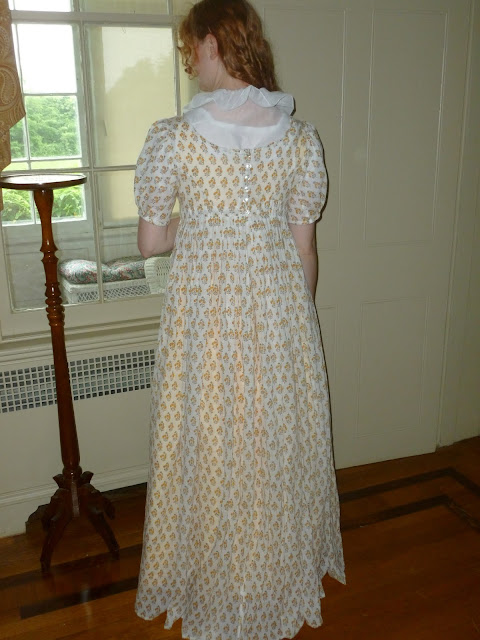 And for once I dressed for breakfast!  Which was amusing, because no one else did.  :p

After breakfast, Stacy was kind enough to take some pictures of me out front. 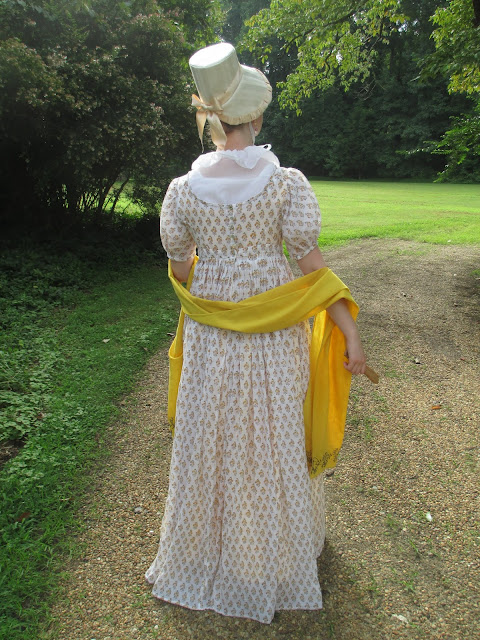 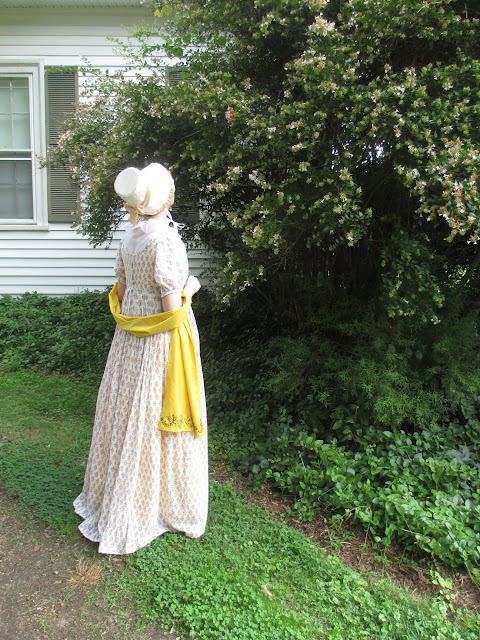 And we took a few inside shots, too. 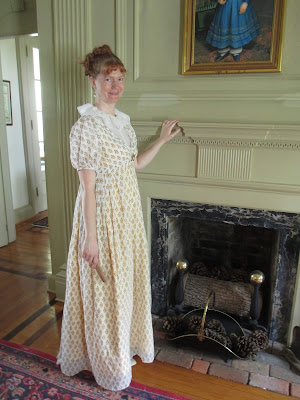 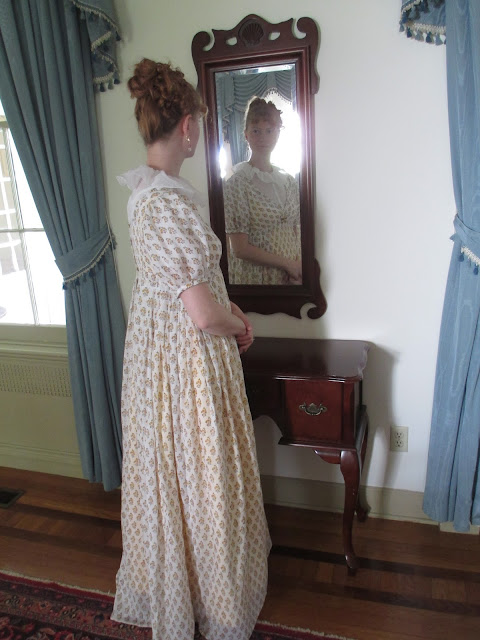 The dress is so comfortable!  It's light and breezy, which makes it the perfect summer dress.  I really love wearing it.  I was sad I had to take it off after the photo shoot, but I was even sadder to leave the manor!
But we put our bright faces on for a group shot on the stairs. 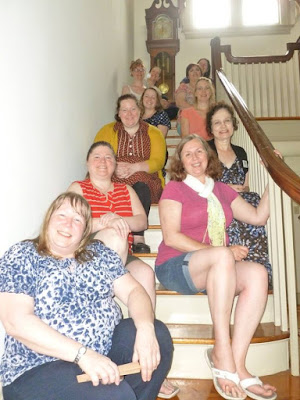 Finally, just before we all packed up our cars to leave, we left a note in the house's guest book: 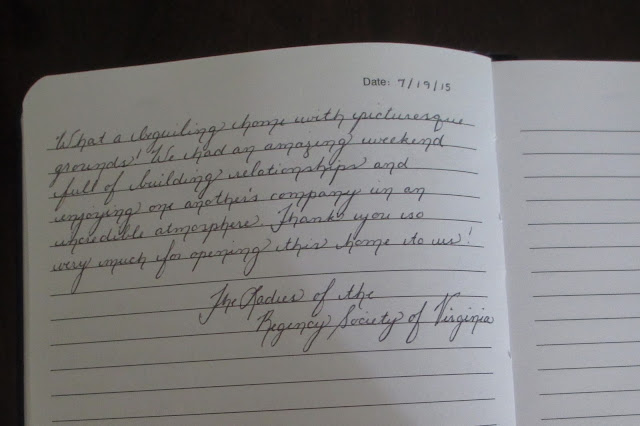