Only a week after The Mad Dress shenanigans, I ended up making another dress in an even shorter span of time!  But this was completely unintentional.  This dress was never meant to be made...  First, some backstory.  (Ok, a lot of backstory.  Bear with me.)

Brian the Engineer and I were going to a wedding at The Boathouse in Central Park, and the invitation requested "black tie optional" attire.  As of one week before the wedding, I had no idea yet what I was going to wear.  My plan was to make a dress from my stash, as I have several patterns and fabrics set aside for modern dresses that I never get around to sewing because I'm always working on historical costumes and/or clothes for Reptar.

Anyway, Brian surprised the heck out of me by suggesting that we just wear some of our Regency formal wear!  He even ran it by the groom, who told him that the bride was hoping that we would do just that.  So... my sewing plans for the coming week took a hard left turn.  Instead of making a new (modern) dress for me, I would instead be making a new pair of Regency trousers for Brian!  (His old pair was too small, and had been converted [poorly] into breeches.)

I also needed to finally add the tail pockets to his black wool tailcoat, since I had made it rather hurriedly for a ball four years ago and never actually finished it!  I got it to a wearable state for that ball, and added sleeve linings and properly finished the cuffs for the next ball - two years later.  The tail pockets were missing this whole time, and it felt really good to get those on at last!

In between that and making a new pair of trousers from scratch, I managed to find time to remove the sleeves from my Green Sari Open Robe so that I could enlarge them.  Here is what they looked like before:

They were very tight, which made the open robe very difficult to put on over my shift and Sheer Striped Gown without the sleeves of both of them getting bunched up around the top of my arm.  Also, I could only lift my arms this high: 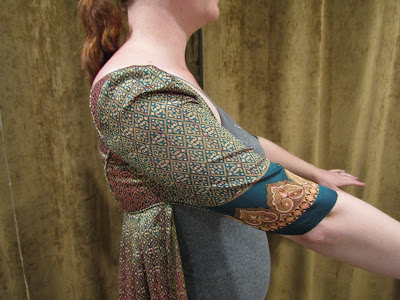 Which made dancing rather difficult!  The sleeves were tight when I first made the gown four years ago, because I only had a very small amount of fabric with the edge trim, and I was determined that the sleeves would have the trim!  And they've only gotten tighter as I've steadily gained weight over the past three years.

When I wore the open robe at the Regency Ladies' Retreat, I could barely get it on - even with assistance.  So I was definitely going to expand the sleeves before I wore it again.  Fortunately, I kept ALL of the scraps from the sari when I made it in the first place, intending to use them to make a matching reticule someday.  I dug those out, and found that I had a couple of pieces of border trim that I could piece together with pieces of the main fabric and insert into the sleeve seam.  I planned to open up the armscye a bit, as well.

I was pleased to discover that not only did this pieced insert give me two extra inches in each sleeve, but I was also able to correct an issue that had bugged me when I first made the gown: 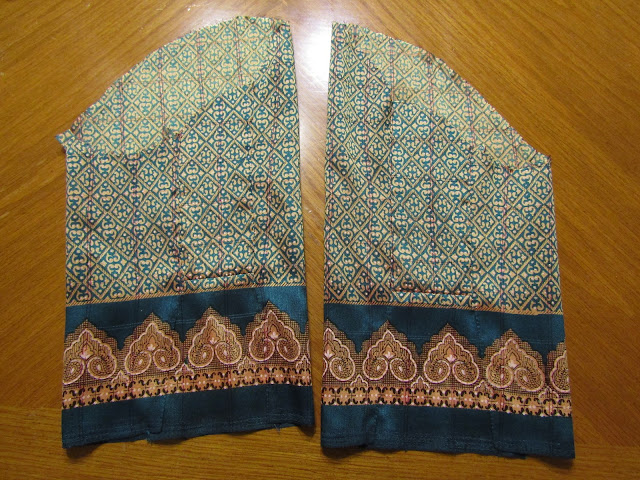 I perfectly matched the border motifs at the seam!!!  :D

With most of this important sewing done, I packed up my (backup) sewing machine and we left for New York.  We had a long drive, so I could do some hand sewing in the car.  I hemmed Brian's trousers and attached the buttons, so they were done.

Once we got to the hotel, I pulled out my machine to patch my stays over the busk pocket where it's starting to wear through, and I suddenly realized that I had forgotten to pack both my white bodiced petticoat and my Sheer Striped Gown!  So I had NOTHING to wear under my Open Robe!  We were  eight hours from home, in the middle of Manhattan, and the wedding was in 14 hours.

Luckily, I had - on a whim - brought along a bolt of black cotton in case I got all of the essential sewing done and still had time to make Brian a new black cravat. 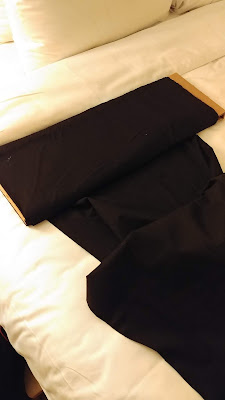 By an amazing confluence of events, I had everything I needed to make myself a drawstring underdress!

1. I had a little over 4 yards of fabric on the bolt, and I'd brought the entire thing rather than just cut off the length I needed for a cravat because I was short on time.
2. I could reverse-engineer the bodice pattern from the Open Robe, which happens to be the same pattern I had used when making two previous drawstring dresses, so I knew how to do it and - more importantly - I knew that I COULD do it.
3. The fact that I had removed the sleeves from the Open Robe and had not yet reattached them made the pattern drafting much easier!
4. I had brought along a roll of 1/4" twill tape so I could make the tie at the back of Brian's trousers.
5. I had the sewing machine, black thread, scissors, and pins.

Thankfully this dress didn't need sleeves, so that dramatically cut down on the construction time. I tried on the Open Robe and used the twill tape to measure how far up the front needed to come from the top edge of the front of the robe.  Then I used pins to outline the front piece: 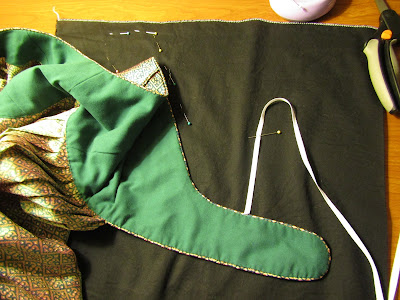 After that first picture, I ended up shifting the entire piece over to the very edge of the fabric, to maximize the amount of fullness at the front neckline and waistline. 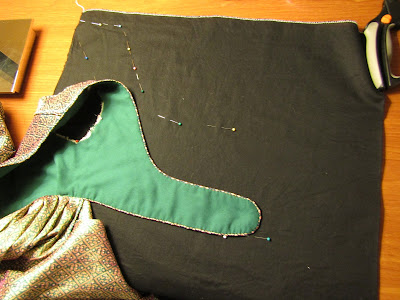 I used the twill tape again to measure the length of the skirt that I needed at the front, and cut out the front bodice and skirt in one piece.  I used pins again to outline the back bodice piece on the fold: 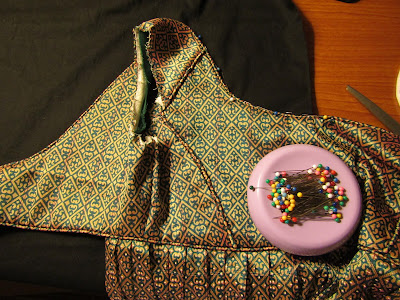 And I cut a full width of the fabric to match the skirt front at the side seams.  This got gathered in to the back piece at the waist.


Then I cut bias strips for the drawstring casings. 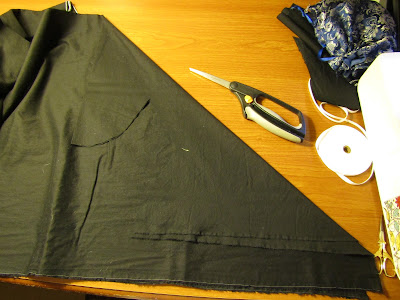 I used the busk from my stays as a guide for the width to cut the strips: 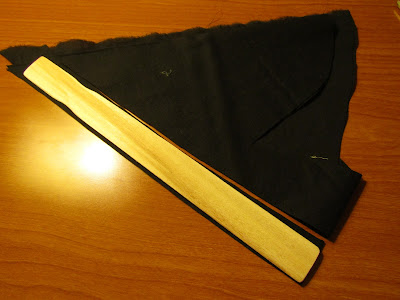 And that is the end of my construction photos!  I made the whole thing in just over four hours, then crashed for the night.  The wedding was at 11:30 the next morning, and I felt pretty amazing in my accidental dress: 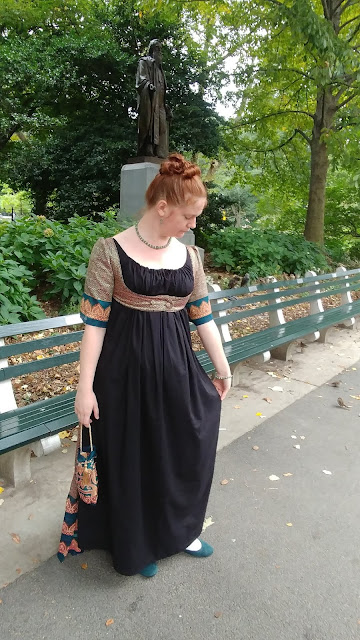 We got some photos of me in Central Park before the wedding began: 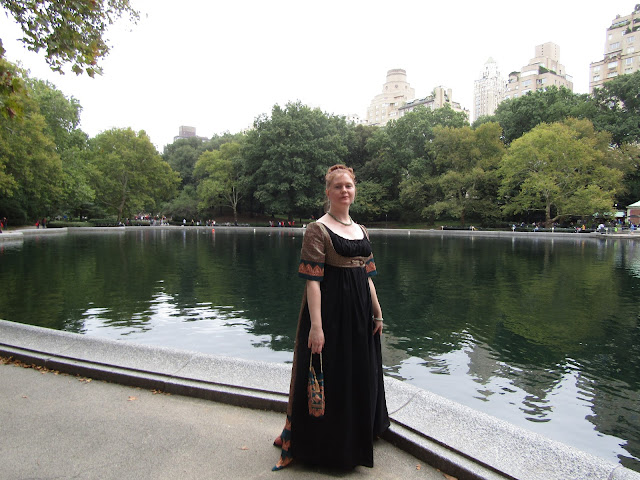 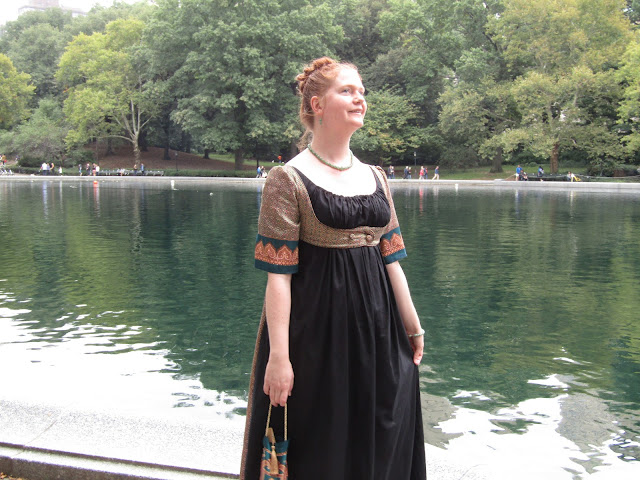 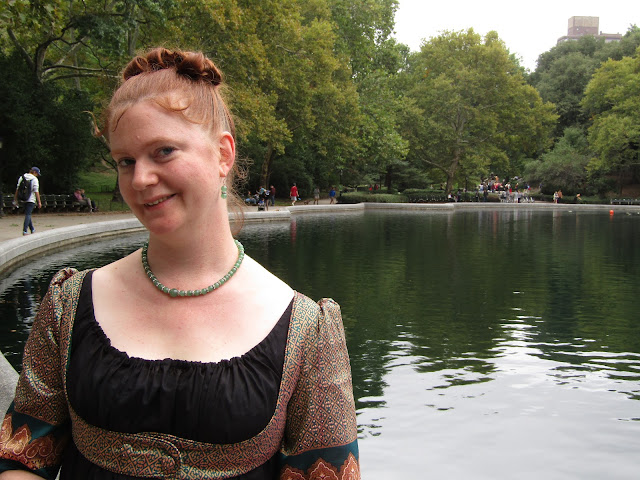 Brian the Engineer and me, feeling fancy at the wedding: 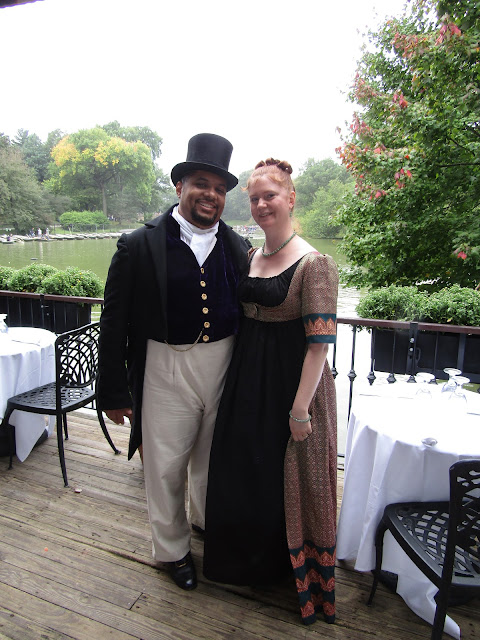 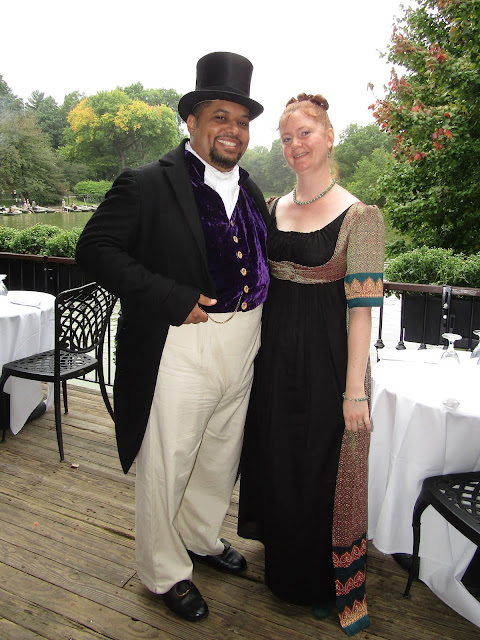 The funny thing is that I've been wanting a black Regency dress for a while now!  I just haven't had an occasion to make one.  But I can always add sleeves to this one now that it exists.  :)
Posted by Chelsea at 7:11 PM 6 comments: