I made a quick 18th Century jacket last weekend for a winter-themed photo shoot at Colonial Williamsburg.  I was already planning on making it to complete the outfit I wanted to wear for my Christmas card pictures this year, but American Duchess's photo contest moved my deadline up considerably.  I'll post the pics from the shoot after the contest is over, but for now here are pics of the jacket. 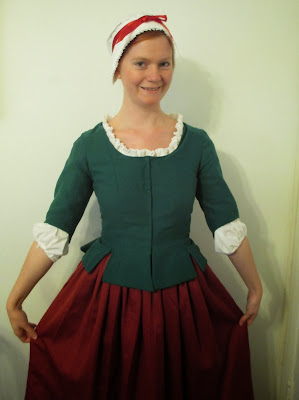 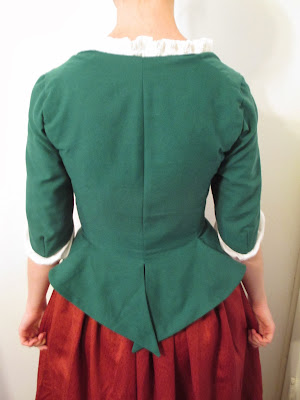 I borrowed the pattern (with permission, of course) from work, and put it together with no alterations.  I'm wearing it without stays, as I still haven't finished the ones I started a year ago.  I did finally finish my shift, though!  I've worn the red petticoat previously for photo shoots featuring my Lowe's curtain cloak, along with the mob cap.  My new muff cover did get a first wearing, though!  So look for those pictures after December 6, when voting is over.