I cut out this jacket three years ago, the same time as I was making my Coral Floral Jacket.  But I never put it together until this past week, when I wanted something new to wear to Fort Fred.  (More on that later.)  I had yellow wool set aside for a petticoat (it will eventually go with the gown I started in the B&T workshop a year and a half ago) that perfectly matches the pale yellow linen I was using for the zone front of this jacket, so it was about time I went ahead and made it.

Here are my photos from three years ago: 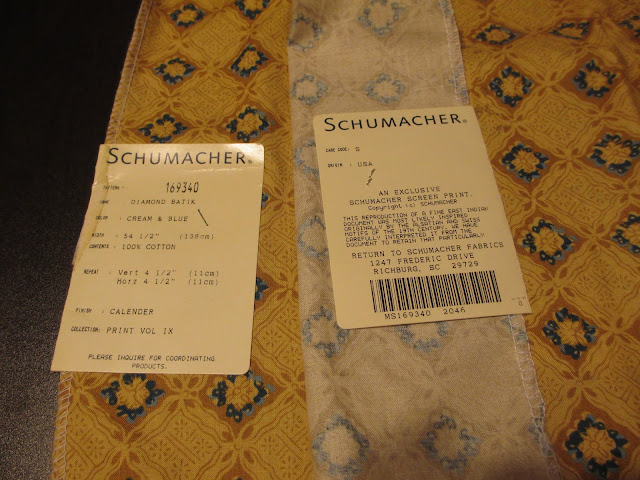 I had two 26" square samples of the same fabric, which was barely enough to squeeze out a zone-front or cutaway jacket.

I managed it by sacrificing the deep point at the center back waistline, and edging the bottom of the sleeve into the selvedge.  Fortunately, most of the white would be hidden inside the elbow dart and seam allowance. 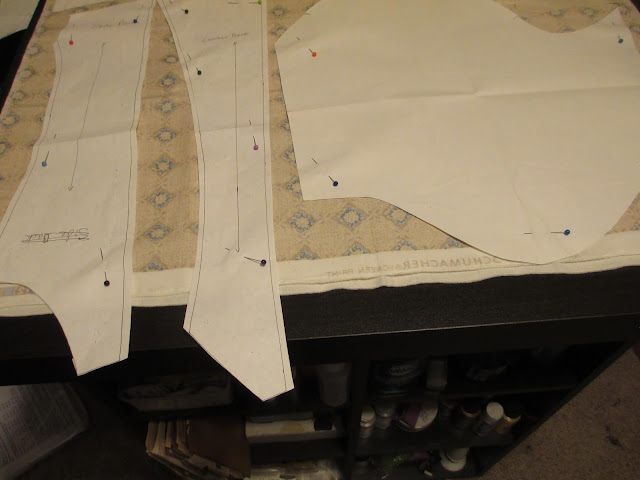 The largest remaining piece would become the jacket peplum.  I traced a pattern from it, in case I want to duplicate it someday. 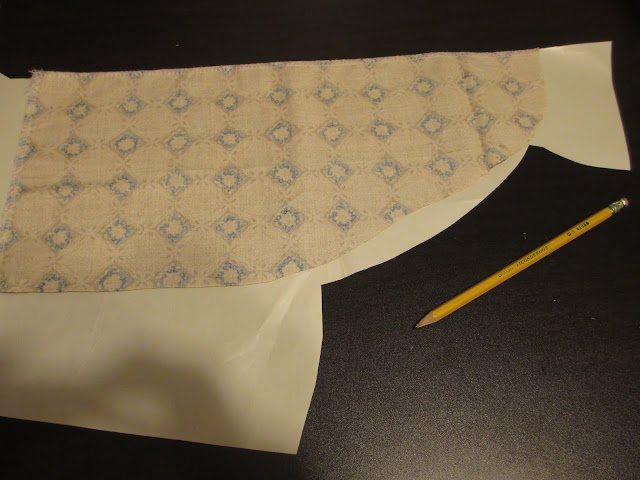 Here is my test pleating for the peplum: 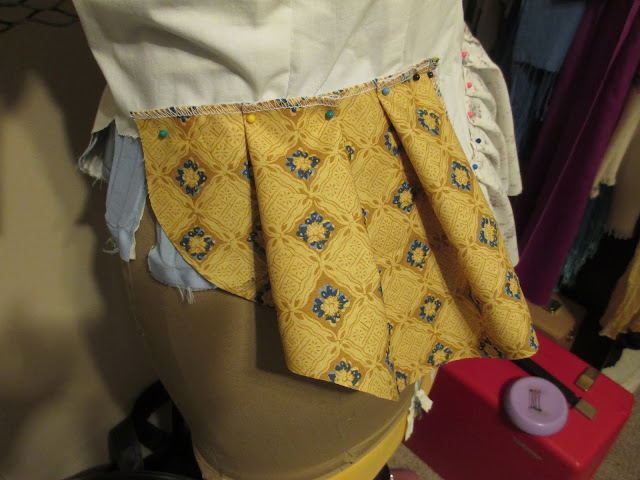 And then it languished for nearly a year.  I don't know what I was originally planning to use for the "zone" part of the front, but from the time stamps on my photos I can tell you that I chose this pale yellow linen and cut out the original front pattern piece from it in February 2017: 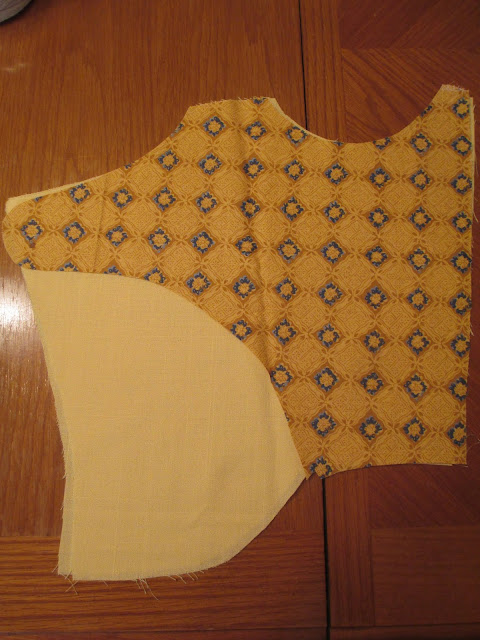 And then did nothing with it for another two years!  But last week, with Fort Fred on the horizon, I decided now was the time.

Since it had been so long since I cut it out, and I'd had a baby in the interim, I was concerned that it might not still fit if I made it up as originally cut out.  To test this, I tried on my old Coral Floral Jacket over my stays laced to a comfortable level, and it would not pin closed.  Which I expected.  I tightened the stays and tried again, and this time I got it to fit!  But the stays were uncomfortably tight.  Also, the armscyes of the jacket were uncomfortably tight - a problem I'm finding with many of my older costume pieces.  So adjustments would need to be made.

I ended up taking 1/2" seam allowances on the center back, side back, and side seams instead of 5/8".  I didn't want to go too much smaller and risk the structural integrity of the jacket, plus I needed the seam allowances to support casings for the bones on the back seams.  I applied those to the lining pieces, which I had cut out at the same time as the original jacket.

I have no photos of construction, other than these quick ones I took on my phone while playing around with trim ideas: 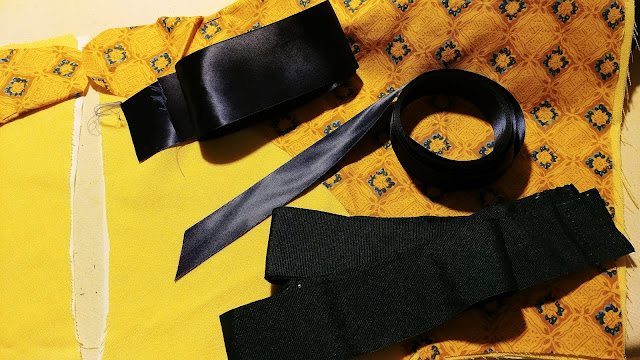 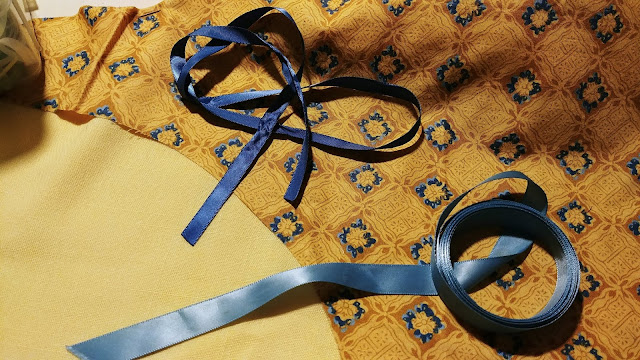 I really had no idea what kind of trim I should do, but after discussing it with friends who are more knowledgeable about 18th Century fashions than I am, I decided to go with no trim whatsoever.  Which was certainly a lot easier!  I even nixed the bows I was going to put at center front: 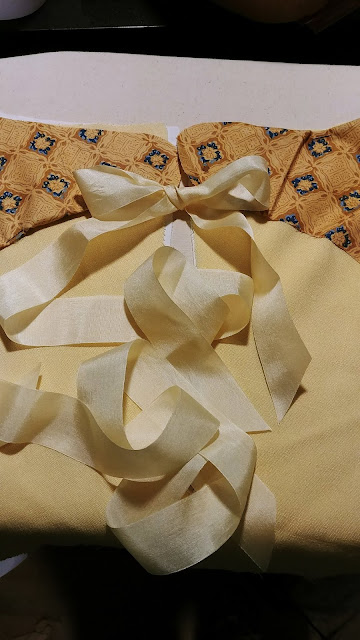 My friends told me that cutaway jackets of this type were not as "frou-frou" as some of the earlier 18th Century styles, and that less was more.  They did encourage me to use one of the above dark blue ribbons as a belt, though.

I did take one actual construction photo!  It shows the line I was about to cut to open up the armscye more on the jacket front: 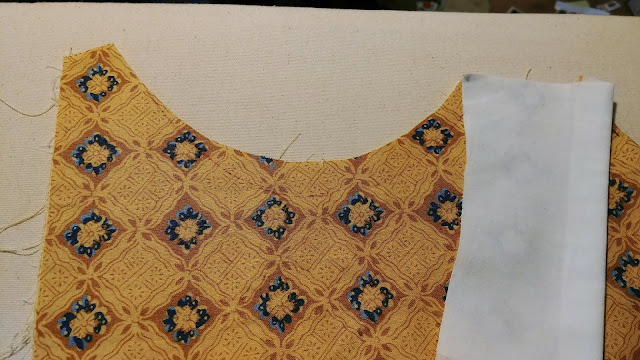 I lined it up with the shoulder strap at the front of the armscye, so it would match up properly.  I also cut down the lower edge of the top curve of the sleeve, by the same amount.

Here I am wearing the finished jacket at Fort Fred!

I was pleased with the end result, and it was comfortable to wear. 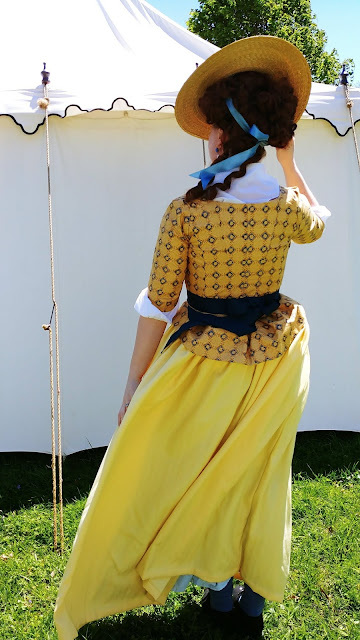 I'd like to get more photos of it, but it was so windy that day!  Photo ops were largely eschewed in favor of ducking into sutlers' tents to get out of the wind - and shop!  I'll post about that next.
Posted by Chelsea at 7:46 AM