HSM - A Good Start and an Apology

First of all - and this is long overdue - I would like to apologize to all those who signed up to participate in my 2014 Year of Foundations sew-along that I promptly abandoned very early in the year.  I wish I could use the excuse that "Hey, I got engaged and the wedding took over everything!"  But that is just not true.  I got engaged at the end of May in 2014, at which point I had already been neglecting my sew-along for a solid three months.  So again, I apologize to everyone who was planning to participate and/or watch.  I know I had very ambitious plans for making undergarments that went right out the window, and I feel bad about that.  But I feel worse about the fact that all of my promised inspiration posts, tutorials, and participant round-up posts were likewise never realized. I truly am sorry that I disappeared so thoroughly on that front.

Clearly I am not cut out for running sew-alongs.  I can, however, participate in them.  Which brings me to my first Historical Sew Monthly post of 2016 - the aptly-named Procrastination Challenge!  (This ties into my apology, because my focus for this challenge is 18th Century foundation garments.)

I was originally planning on finally finishing my 18th Century stays for this challenge, and I may still.  I have started working on them for the first time in two years, so they definitely fit the Procrastination theme.  This is how I've been storing them since March of 2014:

I started by evaluating the work to be done.  I had left off with the layers of coutil and blue cotton broadcloth basted together:

The next step is clearly to start stitching channels for the boning.  I chose to do this - starting with one of the center front pieces - in a somewhat unorthodox way. 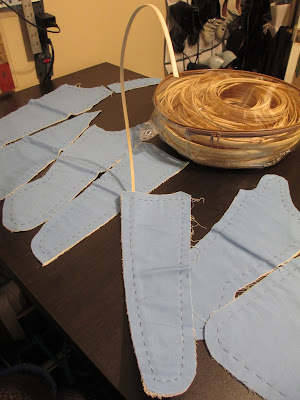 I inserted a piece of 1/4" reed boning between the layers of coutil and nudged it up against the CF basting stitches, then began stitching right alongside the other edge:

I keep moving the reed as I go, creating new channels across the width of the piece.  This is how far I've gotten: 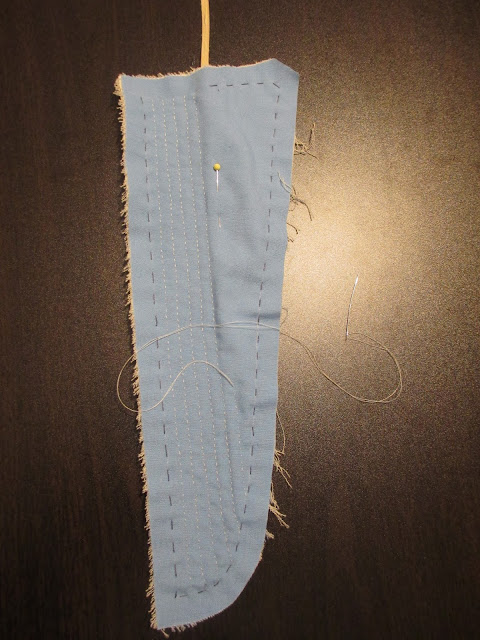 This will be slow going, I know.  But I think I'll be happier with the finished product than if I were to sew all of those boning channels by machine.  And with the bone inserted as I'm sewing, I know that the channels will be the same width and the bones will fit snugly.

Hand sewing hurts my left hand after a while, so I can't work on these continuously.  I have been very active in the meantime, though!

I finally made a set of pocket hoops!  I had very well-intentioned thoughts of joining The Dreamstress's Panier-Along way back in 2013, but... Well, I didn't.  But I finally got around to it, and I made these in two days!  I took exactly zero pictures of the process, mostly because The Dreamstress did such a fantastic job of writing and illustrating the tutorial with her own pictures, that I thought mine would be completely redundant.  Anyway, they are done and they are fabulous!  Here's the breakdown:

Pattern:  Panier-Along tutorial by The Dreamstress

How historically accurate is it?  Pattern-wise, very.  Materials-wise, mostly.  I'm calling the fabric I used linen even though it suspiciously doesn't wrinkle.  Construction-wise, I cheated and sewed it entirely by machine.  So kinda?  Overall I'd say 80%.

Hours to complete: Not including the overnight soaking of the reed boning, I would say three or four?  It went super fast.

First worn:  Just for fun so far.  I have an event in March where they will be first worn.

Total cost:  I believe I paid $1/yard for the fabric from the bargain table at the Costume Design Center, and I certainly used less than a yard.  The reed boning is $25/coil, which is approximately 90 feet.  I used 12 feet, so approximately $3.33 worth.  Thread and twill tape were in my stash, so total cost is around $4.00

Next up is my fun floral petticoat!  This was quite a win, because not only do I have a finally finished project, but I was also able to reclaim these pins from it:

A long time ago (2012) in what feels like a galaxy far, far away (Michigan) I made my first 18th Century petticoat from an old fitted sheet.  I even posted a tutorial on it, whether or not there was ever a need for such a thing.  Shortly after this, I saw what I considered to be a very cool thing on the American Duchess blog:  a drawstring-sided petticoat!  Well, it just so happened that I had another old fitted sheet, and I decided to make my own drawstring-sided petticoat for wearing over pocket hoops.  I started it, and got as far as pinning the casing on one side (see above) before abandoning it.  And there it has languished ever since.

But!  Now that I have pocket hoops over which to wear such a petticoat, I decided it was high time I finished the damn thing!  :D

First I liberated the poor trapped pins by stitching down the sides of the pocket slits and sewing down the bias tape casing: 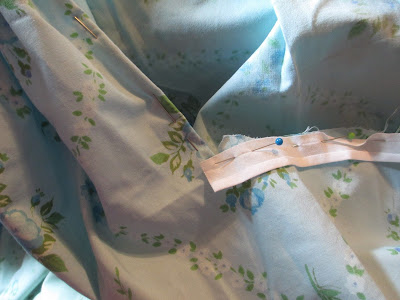 The shape of this petticoat is different from the first one I made, with the cut-out corners of the fitted sheet meeting at the top sides. 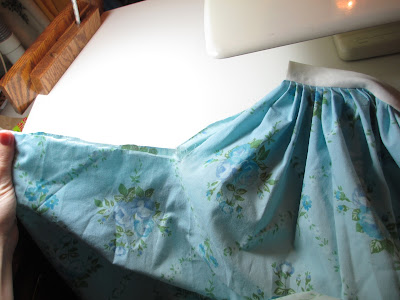 The lower edge of the cut-out side is what I covered with bias tape casings: 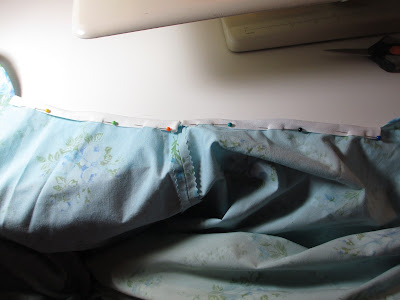 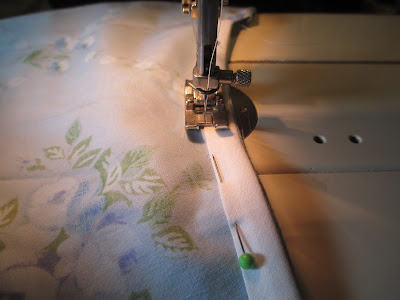 And when it was done, the drawstrings got drawn up to pull in the excess over the pocket hoops: 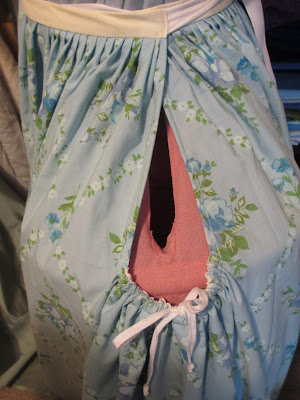 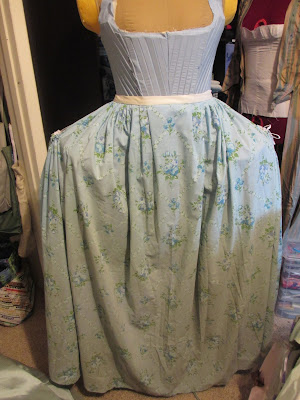 It's not exactly how the petticoat on the American Duchess post was constructed, but I thought it was a creative use of a fitted sheet.

I marked the hem by finding the highest point on one of the sides:

And marked 5" up from the floor all the way around:

After I hemmed it, I still felt that something was lacking.  I decided to add a ruffle around the hem, to help outer petticoats and gown skirts hang properly and not fold inward at the bottom.  I used dyed blue cotton muslin leftover from making my wedding dress to make a ruffle.  I used The Dreamstress's method of cord gathering, just as I had for my other petticoat.  I ended up with a 7" ruffle: 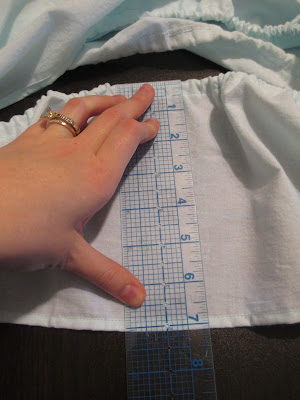 So I measured up 7" from the hem of my petticoat: 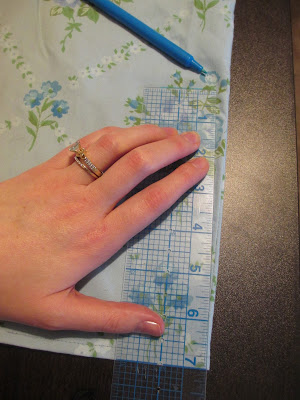 Pinned and gathered and stitched the ruffle in place, and voila!  A finished underpetticoat: 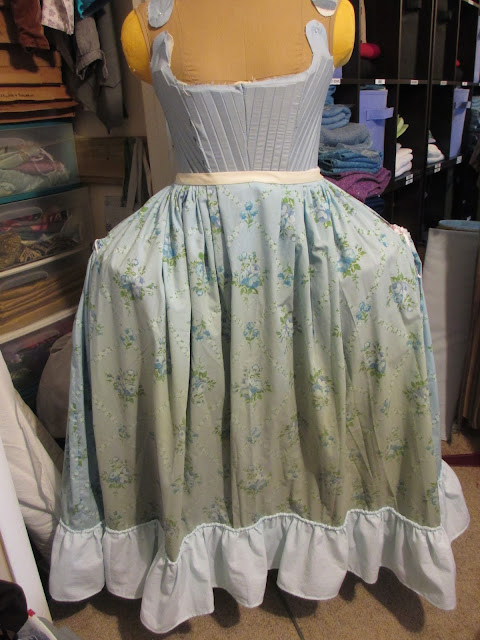 Pattern:  Mostly made-up by me, but with some construction tips from American Duchess

How historically accurate is it?  Pattern-wise, the inspiration is an extant piece at the Met, so very.  Execution-wise, I kind of took the idea and ran with it, so somewhat.  Materials-wise, I used all cotton fabrics and notions, although the pattern of the bedsheet is probably not terribly accurate for the 18th Century.  I'm giving it a pass since it's an undergarment.  Construction-wise, it's entirely machine-sewn.  Overall, I'm giving it 60%.

Hours to complete:  I have no idea how long I worked on it three years ago, but finishing it went pretty quickly.  The ruffle probably added the most time.  Probably 5-6 hours total.

I will share all the details of the stays once they are finished.  It may not be before the end of this month, though.
Posted by Chelsea at 10:35 PM