How To Make a Ruffled Petticoat From a Fitted Sheet

Need a ruffled petticoat to add poof to your gown, but don't want to buy yards and yards of fabric?  Use an old, worn-out bedsheet instead!

This can also be done with a flat top sheet, or with a brand-new sheet or set of sheets with a pretty pattern, for a nice underskirt worn with an open robe or jacket.  For my tutorial, I am using an old worn fitted sheet.  This petticoat will be worn only as an undergarment, so I didn't mind the fading in the middle of my sheet.  This will be strictly a utilitarian garment.


(I used the same method as American Duchess used with her 18th Century Petticoat Tutorial, the only real difference being that I made mine from a sheet.  You can refer to her tutorial if mine is in any way unclear.)

The first step (with a fitted sheet) is to remove the elastic from the short ends, and undo the seams creating the corners.  This step will not be necessary with a flat sheet, although you will want to unpick the hems.

Next you will want to determine how long you want your petticoat to be.  I did this by measuring my waist to floor, which was 39 inches.  I rounded up to 40", since hemming will make it shorter.  Fold your sheet in half lengthwise, and measure from the fold half of the length you want (so 20", for me) and snip with your scissors.

Now you can rip the sheet down both sides (I love ripping things!) to end up with three long rectangles: 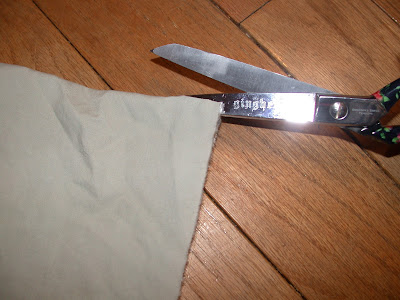 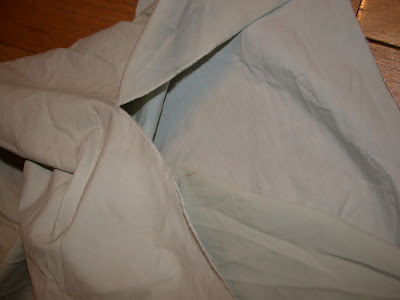 Now you have two big squares, which will make the front and back of the petticoat.  It may seem silly to make two pieces from one when you're just going to sew them back together again, but this will make it easier to form the pocket slits.  I do this by marking 8" down from the top, and sewing the seams from that mark down to the bottom.  Then I fold over the edges of the unsewn portion twice: 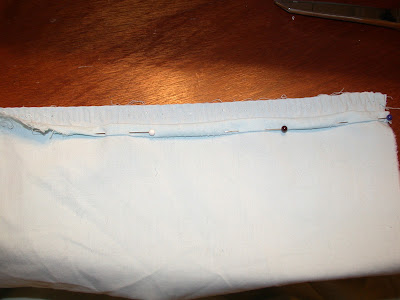 Pin, and sew down one side of the slit, across the bottom, and up the other side: 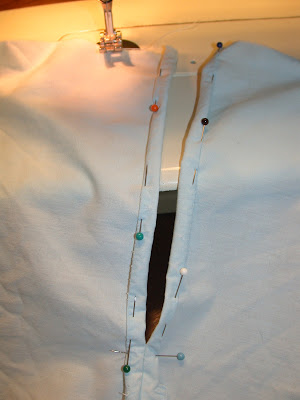 Now for the ruffle.  Cut off the longer bits left over from the corners:

Sew the two rectangles together at both short ends to form a ring, and hem.  (I also hemmed the main body of the petticoat at this point.)  Next you will need to gather the ruffle to the width of your petticoat.  Here is another way the two side seams make things easier - you can just match up the seams of the ruffle to the seams of the skirt.  I used The Dreamstress' method of cord gathering for my ruffle:

Pin the gathered ruffle to the main body of the petticoat, with the hemmed edges even.  Sew along the gathers: 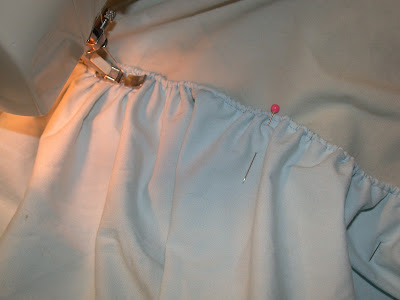 Gather or pleat the top edges of the main body to half your waist measurement.  I used knife pleating: 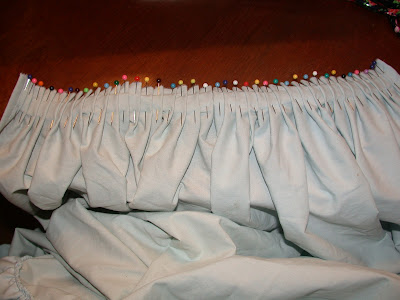 Baste along the edge to secure the gathers or pleats:

For my waistband I used quilt binding, which is just wide bias tape.

Cut two lengths of bias tape - one for each gathered/pleated section.  Open out one fold and pin to the pleated edge with right sides together, and sew along the fold. 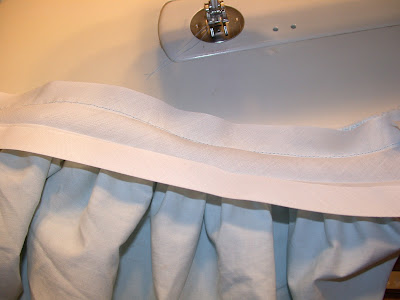 Finally, add the ties.  I chose to secure mine with a zigzag stitch to the seam allowance inside the waistband, before folding the bias tape to the inside and stitching it closed by hand.

Voila!  A finished petticoat!  Now you get to put it on:

So that's one 18th Century petticoat under my belt.  I have so many more to make...  I even bought more curtains today for the express purpose of making petticoats.  But that'll be my next post!
Posted by Chelsea at 8:00 PM