For the past three years I have pretty much limited myself to the Regency era with my personal costuming - less out of particular interest (I was initially not excited about the era, but my interest has grown exponentially since I began dabbling in it) and more as a consequence of having myriad events at which to wear Regency garments (plus many new friends!), and few events of other periods.  In fact, I have yet to attend a single specifically 18th Century event, even though that was my main area of interest when I first started this blog!  All of my 18th Century garb (such that there is) has only been worn for informal photo shoots, so far.  Which, don't get me wrong, is a lot of fun!  But all of that is about to change...

In the first two weeks of March I will be attending not one, but two events that are outside the Regency era!  It's very exciting, but I may be a little insane because these two events are not only back-to-back weekends, but also wildly different periods.  :p

On March 5, the annual Battle of Hampton Roads event takes place at the Mariner's Museum, and I have been invited to participate!  Of course, I have absolutely nothing 1860s.  Yet.

I. Love. Plaid.  I'm surprised it has taken me this long to make something from plaid fabric.  Then again, it wasn't a terribly popular pattern choice in Regency, as far as I know.  But when I think 1860s, I think plaid!  I bought ten yards of this yummy cotton voile at SR Harris over Christmas (blog post on that shopping trip here) with the intention of using it for this event, even though I hadn't fully committed to attending it at the time.  But I got so excited to work on this dress once I got the material in my hands!

I have not yet decided which pattern I am going to use, but I'm leaning towards 1818, which I just bought yesterday.  (99 cent Simplicity patterns at JoAnn's!)  I think the coat sleeves are better suited to such a large plaid, and I was already planning on attempting to make the bodice and skirt separate when I was looking at using 4400.  I like the idea of future mix-and-match potential.  I welcome any input from people who have done 1860s, because I'm very new to the era!


The second event is the fabulous Francaise Dinner on March 12!  I have been yearning to attend this annual dinner for a couple of years now, but lack of proper attire (and some scheduling conflicts) has held me back.  I had intended to make a robe a la Francaise for this year's dinner, but that has not happened.  I admit to being frightened of the prospect.  However, I have learned that a Francaise is not required for the dinner, just 18th Century formal wear in general.  Hooray!

...I have no 18th Century formal wear.  :p  I have exactly two outfits, both of which are very informal: 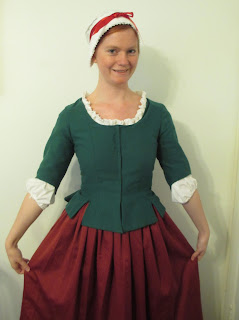 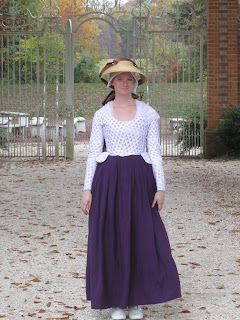 However, I do have this old thing:

I love stripes almost as much as I love plaid.  Actually it's probably equal.  When I saw this gown I could not resist!  I bought it at the Costume Design Center yard sale in June 2013, with the intention of fixing it up to make it wearable (it's slightly too small for me) and a little bit fancier (self-fabric trim will help cover the worn areas).  I have already made a contrasting petticoat that fits over the pocket hoops I recently whipped up, so at the very least signing up for these two events has shifted my productivity into high gear!

I have also gotten a lot of work done on the gown itself, but that'll be the next post.  :)

Of course I also need petticoats for the 1860s gown, as well as a chemise and possibly drawers.  (I already have a corset that will work, at least.)  And if I go with the second pattern, I'll need a chemisette and undersleeves (which are fortunately included in the pattern).

I also need to finish my 18th Century stays, and make a new shift if I have time.  The one I have is cotton, and I'd prefer a linen one.  The striped gown also needs neck and sleeve ruffles, in addition to the repairs and self-trim which are already underway.  And I have ambitious plans for re-covering a pair of American Duchess shoes with embroidered silk, which may or may not happen in time.  I'm going to be very busy for the next month!
Posted by Chelsea at 8:30 AM