Although not my first attempt at making a Renaissance era costume, this is the first one I actually completed.  I wore it to the Michigan Renaissance Faire in September of 2009.  According to my construction notes, I started working on it a month before...

My starting materials:
I started with the bodice, for which I used a navy blue stretch velour top that was too small for me.  I cut off the sleeves and used the front pattern piece from Simplicity 5836 (view B) to roughly shape the V-neckline I wanted. 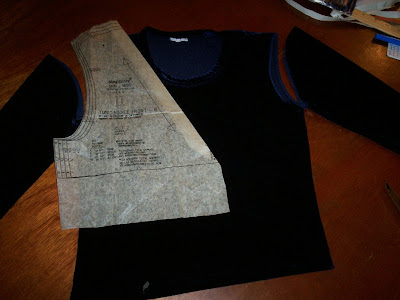 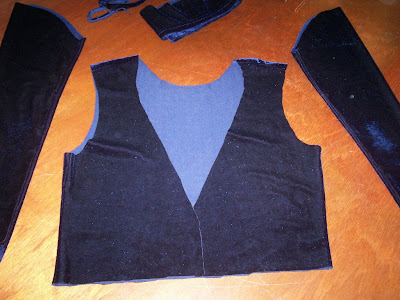 I lined it with navy crepe which I had originally planned to also use for the overskirt, but I changed my mind and ended up using a lovely navy satin instead.  Now, since I was using stretch velour, I cut the lining on the bias so it would stretch along with the outer fabric.  Lining it all up correctly was a pain!  And one side ended up longer than the other:

I evened it out when I attached the skirt, so no big deal.  I used hem tape as facing on the armholes, which worked rather well.  I sewed it to the edge by machine, and then turned it under and hand-tacked it to the lining.

For the overskirt I used Butterick 6391, which I had used for my first Prom dress back in 2002!  Ahhh, memories...  Anyway, I loved the pleated back.  Of course, I modified it to exclude the zipper and opened the skirt in front. 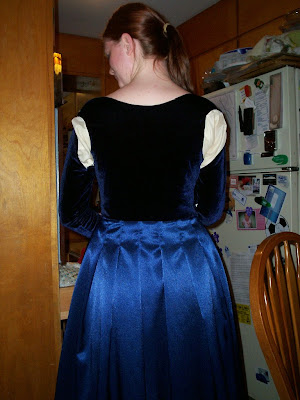 I hand-tacked gold cord, wrapped in narrow metallic braid, to the front edges of the gown once it was complete: 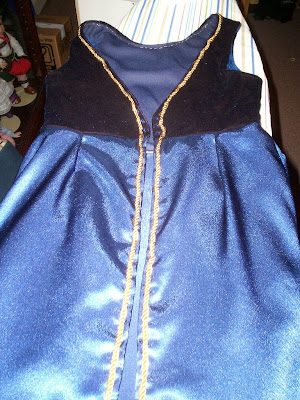 The underskirt was a challenge.  I decided to make the gold brocade one first, and I wanted to make it reversible and adjustable so that either I or my sister could wear it.  (I was already planning the Green Gown I made for her a year later.)  To achieve this, I used the gold brocade for the front and sides, and some green upholstery fabric for the back (or alternate front).  Both sides were too short, so I added contrasting bands at the hem, with trim covering the seams:


The green side still ended up being too short (another story for another post), so I added more material at the top and pleated both "front" sections.  I then sewed casings along the top of the side sections and used twill tape to gather them in - this way the skirt is adjustable.

The sleeves were the biggest challenge.  I knew I wanted them slashed, but was unsure how to go about accomplishing that.  In the end, I stitched crepe facings on the outside with a very narrow seam allowance around a vertical line I had drawn on with chalk.  Then I cut down the line, turned the facings to the inside through the slit, and hand-tacked them down on the inside.  Keep in mind I was sewing these slashes on sleeves that were already constructed - not easy!  But they came out exactly like I had envisioned:

All I had left to do was add grommets (I know - not period!) to the sleeves so they could be laced up to the shoulders, and I was done!  Next post will have many pictures of me wearing the completed gown at the Faire!  :)
Posted by Chelsea at 8:27 PM