This costume, inspired by the fireside scene from Star Wars: Attack of the Clones, was one of the most challenging, but rewarding costumes I have made.  As with all my earliest work, I took no in-progress pictures. It is a bit hot and uncomfortable (three words: tight satin corset) but this costume was certainly fun to wear!  I made it in 2005 for the Star Wars Celebration III convention.

Construction details and pics after the break...


The cape:
I found the perfect feather trim for the cape at Hobby Lobby for $5.99 a yard.  I bought four yards, which turned out to be just enough.  I sewed it in overlapping rows onto black satin and bound the top edge of the cape with more satin.  I was very happy with this trim, as it was nearly as high quality as the black feather trim I had found (but wisely not purchased) at Hancock Fabrics a couple months before for $12 a yard!  The feathers aren't pure black; they have a lovely iridescent green shimmer to them. 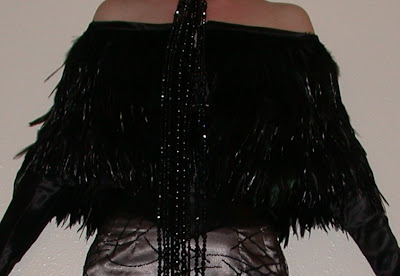 Of course, the prettiest things are often the worst to work with.  The thread kept breaking because the sewing machine needle would get gummy from the glue on the feathers.  Then the dye on the feathers stained my hands, which were full of pin pricks and scratches.  Even after I washed my hands there were dark green dots and stripes where the top layer of skin had been broken.  Not pretty. It took several washings to finally get it out.

The corset:
I decided to experiment with the corset because I hated using boning.  I made the corset in three layers, - Pet Mesh fabric sandwiched in between the black satin and the lining.  And it worked beautifully!  It made the corset sturdy enough, but much more even than I could have accomplished (at the time) with boning.

The skirt:
For the skirt I used two yards of 45" wide silver satin and a yard and a half of  60" wide black organza overlay with a random all-over pattern of thick textured black lines. I think the pattern is actually some type of plastic fused onto the surface. It's it's not as heavy a pattern as the original, but it was a close enough approximation. 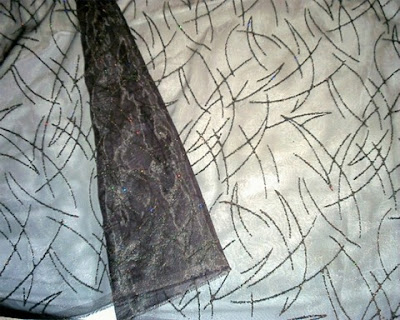 It was also a royal pain to work with. I didn't use my good fabric scissors to cut it because I didn't want the plastic to dull them.  Sewing it was a beast, as well.  Especially the darts!  The seams weren't so bad, but the darts were hideous, because the fabric doesn't like to be folded.  Also, the darts were rather small and there were eight of them.  But they turned out nice.  Hemming was fun, too.  The only thing that didn't give me trouble was the zipper, surprisingly.  (I hate zippers.)

The necklace:
I bought an assortment of loose black beads for this; round, faceted, oval, and also a long strand of interlocking strings of bugle beads, It was the perfect length for the necklace strands, so I used that as a guide for how long to make the others.  I originally threaded all the beads for my necklace on black thread, but at the convention I was constantly afraid of one of the strands breaking and scattering beads all over the floor!  So I restrung the beads on narrow black ribbon, which holds up much better. 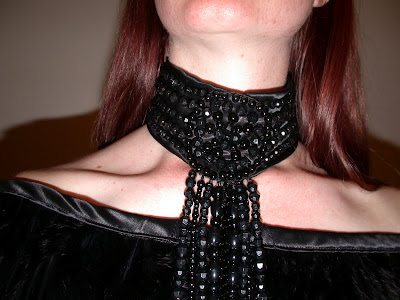 I made the choker from black satin in two parts; a rectangular base to wrap around the neck, and a center circle which the strands hang from.  The choker connects at the center front with skirt hooks.

The gloves:
I used more black satin to make the gloves, which were done in a hurry so they are just tapered tubes hemmed on both ends and with a slit in the seam for my thumb to come through.  I might redo these at some point.

The headband:
My original headband was thrown together last-minute and broke at CIII, not surprisingly.  I still haven't figured out how I want to make a replacement.
Posted by Chelsea at 7:12 PM