Breakfast Friday was ham, eggs, biscuits, and muffins, with fresh fruit at every place.  We also had coffee and tea, of course, and apple juice and orange juice.


Almost everyone dressed for breakfast, but I didn't wake up in time.  I had packed my 18th Century shift to use as a nightgown, and I had very quickly made up a simple bedgown to wear over it for modesty when not in bed.  I put just my bangs in rag curls and threw a cap on over the rest of my hair, then added stockings and "slippers" to my ensemble before joining everyone at the table.


After breakfast, most everyone gathered in the parlor for dancing.  We had already moved most of the furniture from the parlor into the library for movie-watching the night before, so it was a nice clear space.  I got dressed, then joined the festivities for a couple of dances. 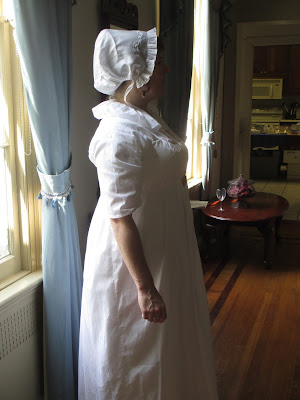 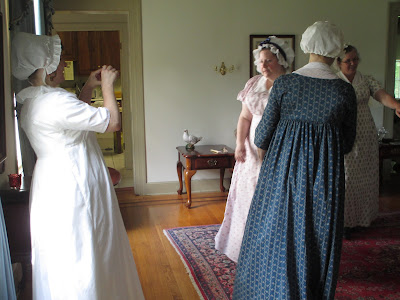 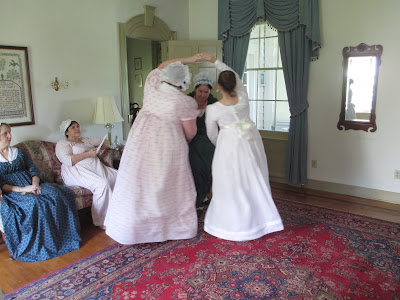 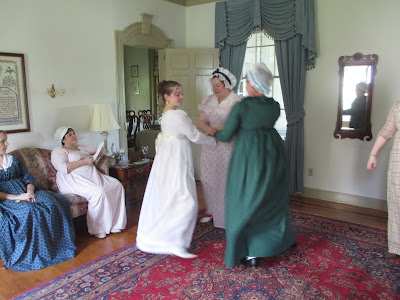 There are no pictures of me dancing, but I swear I did!

I did not get nearly as much sewing done for this retreat as I had wanted to, so I didn't have the stays I had wanted to make.  I've been getting by without proper undergarments by wearing a white tanktop with a built-in bra, but I really must get some stays made soon.  I did finish a hand-sewn chemise, though!  I'm very glad I did, too.

For this trip, I brought along an 18th Century petticoat that I made years ago, and decided at the last minute (that morning) to add some shoulder straps to it to make it more 19th Century.  I think it worked rather well, and I can still use it with 18th Century gowns by letting the straps hang down on the inside.  :) 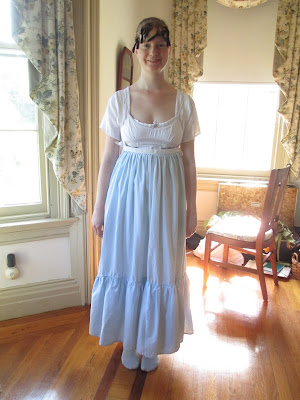 I put my hair in a simple bun with a small braid wrapped around it, took the rags out of my bangs, and replaced my cap on my head.  I really like my cap, which I sewed completely by hand, and must do a separate post on it soon, as well. 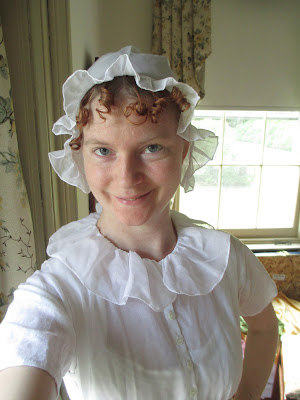 I made it around the same time as my new chemisette, which is also fully hand-sewn.

I wore my Blue Day Dress, and accessorized with a cream satin sash and a new cameo brooch I had purchased recently.

For the breakfast ball I wore my ballet flats-turned dancing slippers, adorned with the silk ribbon bow shoe clips that were my "something blue" for my wedding. 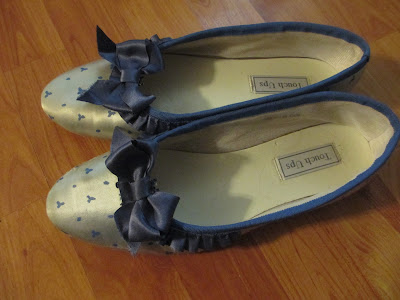 Then after the dancing, several ladies ventured outside to practice archery on the back lawn. 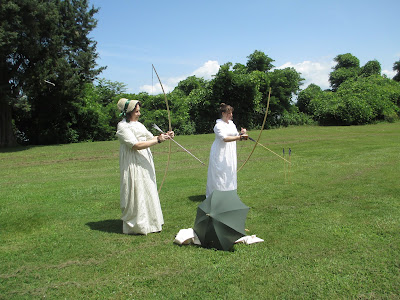 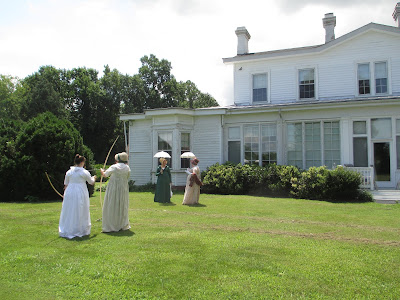 I changed into my yellow boots before joining them, adding my striped bonnet and green paisley shawl to my ensemble - it was too hot for any other shawl, although I had brought my entire collection including three wool ones!  But the paisley shawl is very light and sheer, so it was perfect.

My roommate Jenny and I decided to take a walk down to the river, and we were joined by three other ladies for the journey.

There were two trails down to the water, and Stacy and Rebecca had explored them both on the afternoon before.  They told us to take the easier one, but we mistakenly took the steeper, more wooded one.  Oops. 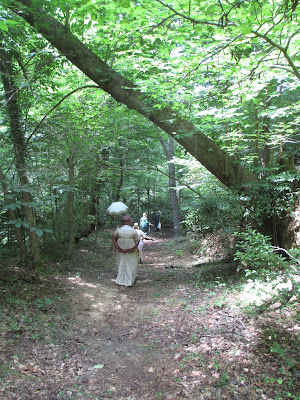 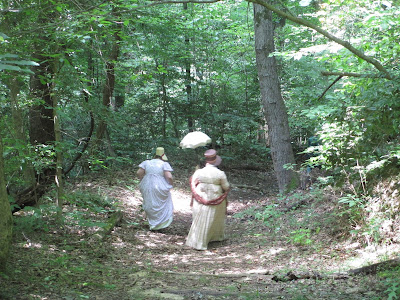 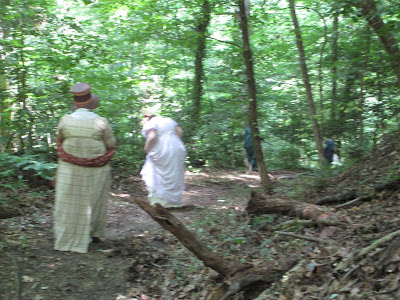 It was a slightly treacherous path, but by going slowly we were able to make it fine.  And we were rewarded by this lovely view of the water: 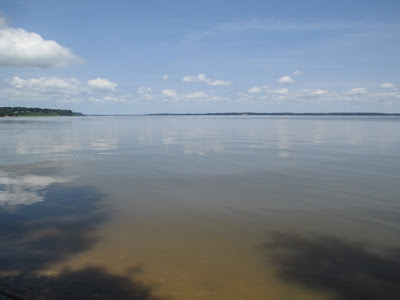 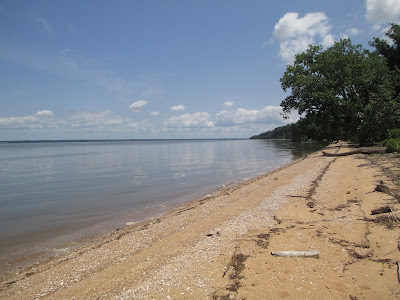 We all agreed to take the easier trail back up to the house, but that meant we had to find it first!
Bonnie opted to take a breather on a fallen log while the rest of us strolled along the beach looking for the other path.  We found it after quite a bit of walking, and I ran back to get Bonnie while the others started back to the house.  As it turns out, they didn't get very far before running into another group of ladies coming down the easier trail, so they decided to stay at the water for a little longer. 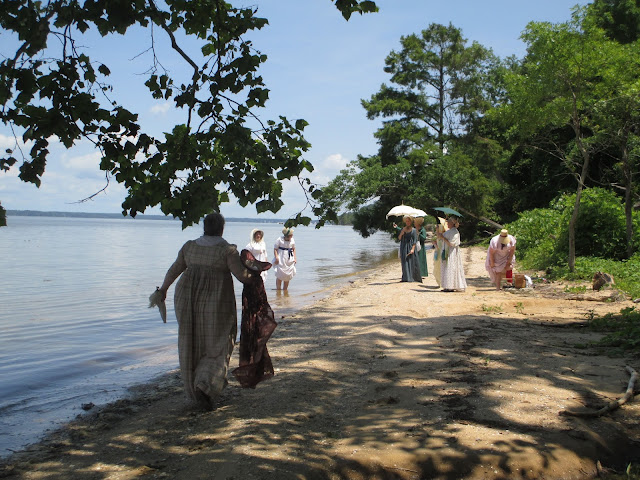 When we rejoined them, a few of the more adventurous gals had removed their boots and stockings and were wading in the river! 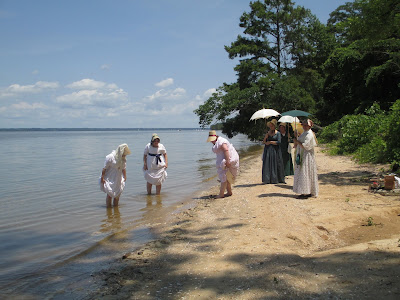 They professed that it felt wonderful, but I opted not to join them.  I did collect several lovely shells along the sand, and washing them off was as much being in the river as I needed.  :p

When the naiads were finished with their water play, we all started back to the house together.  The second trail was much easier!  It started with stairs and a somewhat steep gravel trail, then it leveled out and became a very pleasant and leisurely stroll. 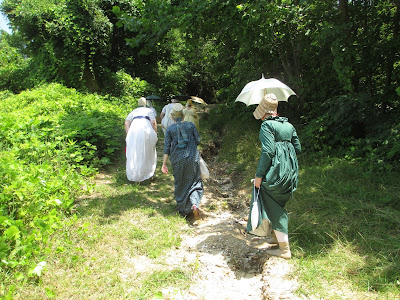 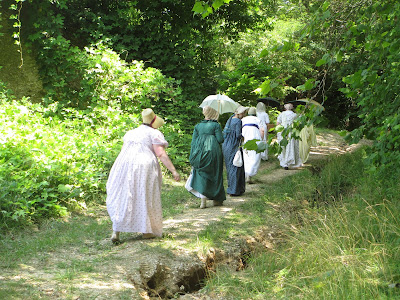 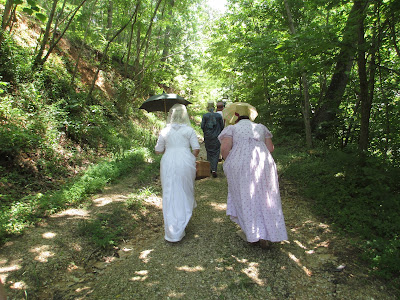 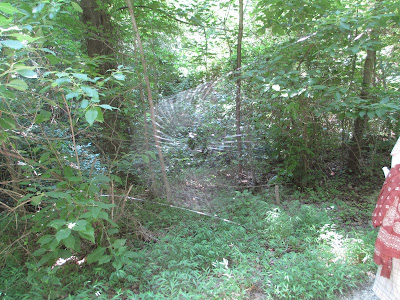 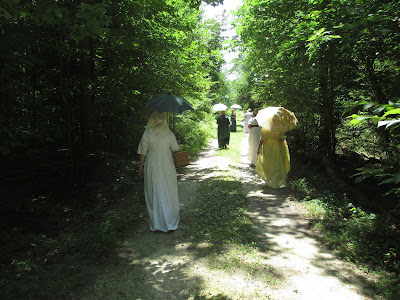 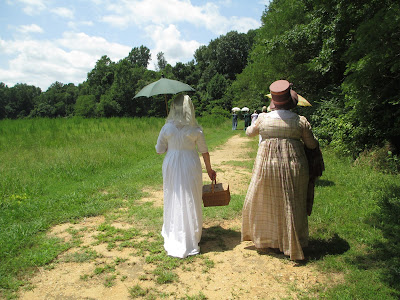