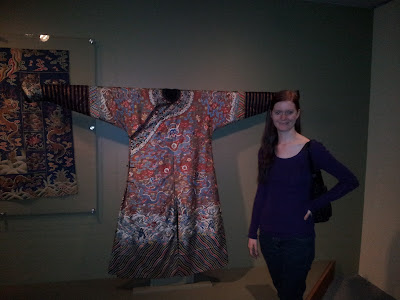 I found myself in the Washington, DC area over New Year's, looking for something fun to do.  I had been to DC once before - my 8th Grade class went on a school trip - and had seen most of the monuments and regular touristy things.  I wanted to do something a little different, as an adult.  The Lonely Planet guidebook called the Textile Museum "The best non-Smithsonian museum in DC."  I would have to agree!

(This is a longer-than-normal post with lots of photos after the break.)

For a suggested donation of $8, you can tour the exhibits on display in an old mansion, as well as a magnificent landscaped garden in the backyard.  There were three exhibits:

The first exhibit featured lots of scraps and remnants of woven and embroidered pieces from the 16th through 19th Century, including many gorgeous examples of velvets like this one:

There were also magnificent rugs and carpets, some of which were quite huge:


Many pieces were made for upholstery purposes, but there were also garments and garment fragments.  I loved these late 18th Century Polish sashes: 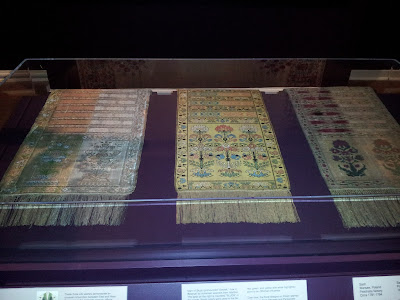 And this women's cap:
This bedspread blew my mind:

The linen cloth was pieced together in five panels, which appear to have been embroidered first and assembled later:

Probably my favorite piece was this embroidered cover from the 16th century:


I loved this one because as I was examining it up close, I could tell that some of the stitches were missing.  I could see the outline of the pattern drawn on the cloth but not filled in, leading me at first to assume it was unfinished.  Then I examined further and realized that some of the leaves and flowers were black:


And those seemed to be the same leaves and flowers that were missing in other parts.  I even found a couple spots where I could definitely tell that the original stitches had partially deteriorated and worn away.  My conclusion is that those stitches weren't originally black, but some other color whose dye is unstable and caused a breakdown of the thread over the intervening years.  It was a fascinating look at decomposition in an otherwise pristine and well-preserved piece.

Upstairs was Dragons, Nagas, and Creatures of the Deep.  I learned that in China, only the Emperor and those related to him could wear garments featuring dragons with five claws.  So this incredible coat was made for someone in the Imperial family: 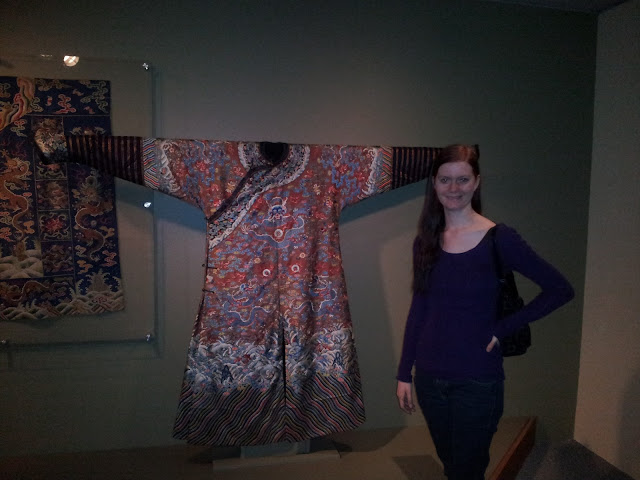 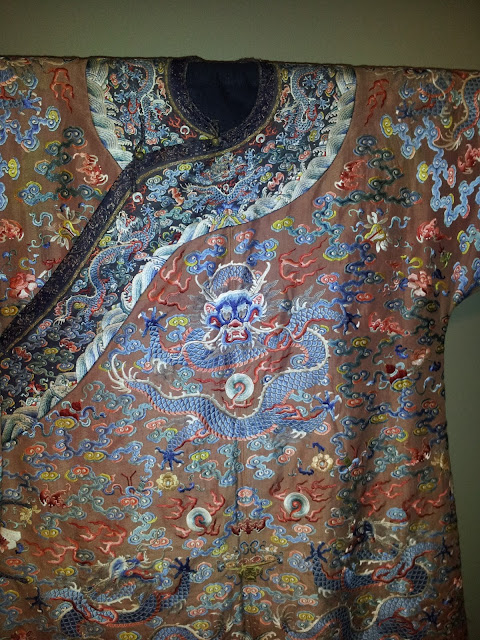 The stitches were so tiny!  And the entire coat is covered with embroidery - imagine how many months years that would take to do by hand!

On the wall behind this coat was an Imperial monk's garment, which I regret I did not get a full-length shot of.  Here is a close-up of one of the intricate dragons embroidered onto it: 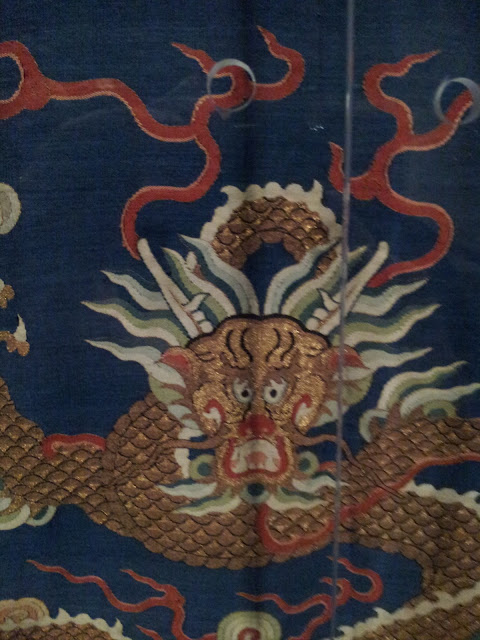 Even this doesn't do justice to the tiny, tiny stitches and amazing artistry used to create this fantastic piece.

Last but not least, two stunning examples of South American appliqué - I can't remember which countries they were from: 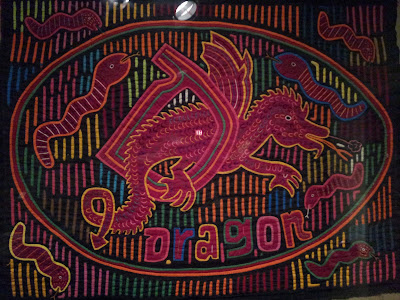 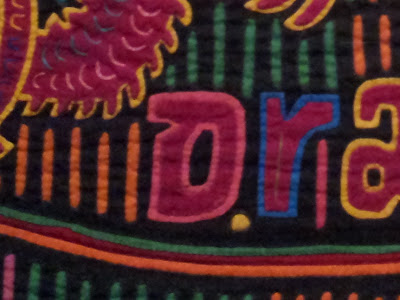 The letters on this piece were appliquéd in two colors on top of each other, and the colored stripes are reverse appliqué - created by slits cut in the black fabric to reveal a bright ground beneath.  The stitches were so tiny! 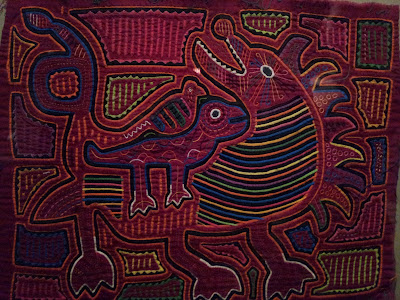 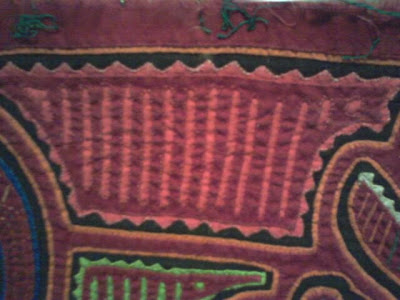 I loved this part, with the reverse appliqué on top of more appliqué.

I don't have any photos of the Textile Learning Center, but it was very cool and informative!  You could see and touch several looms set up with various weaving techniques, and learn about different natural and man-made fibers.  I'm a bit of a textile nerd, and I learned stuff.  :p

Then there was the gift shop... I had just earlier that day (January 2) committed myself to the No New Fabric Challenge, which is probably just as well.  I was sorely tempted by the gorgeous silks and batiks on the shelves.  Of course, I still found something I HAD to have - a print block! 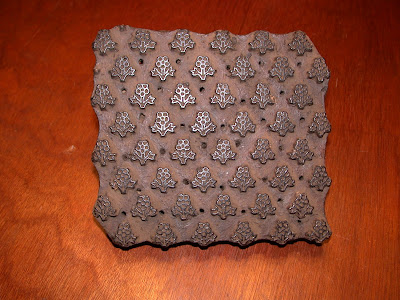 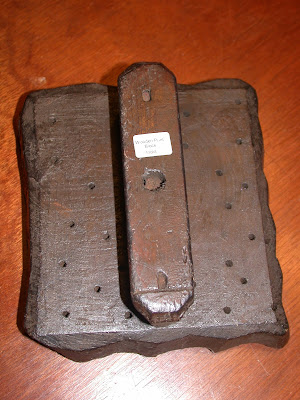 So now I'll get to try my hand at making block-printed fabric.  Stay tuned for upcoming posts on that project...
Posted by Chelsea at 10:51 AM