I finally finished binding my 18th Century Maternity Stays in time to wear them to the Colonial Williamsburg Garden Party on May 5!  However, I did not get any good photos of them at the time because I was getting dressed in a hurry, having just finished stitching trim on my gown.  :p

So I put them on yesterday for a quick photo shoot.  I am really proud of how well they turned out.  They are comfortable and supportive, and have lasted the entire way through my pregnancy!  Here I am wearing them at 39 weeks:

Just for comparison, here I am wearing them (in various stages of completion) at 26 weeks and 29 weeks, respectively: 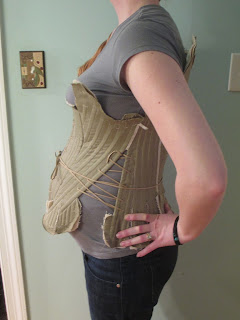 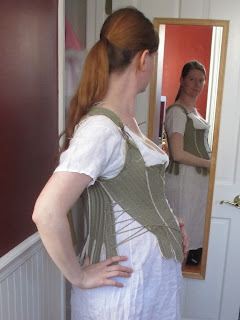 The side lacing is really the key, here.  It makes them incredibly adjustable so that they're never squishing the baby, but still providing support for the bust and for all of my petticoats.  The front lacing makes them very easy to get in and out of by myself, which has been awesome.


Since the last time I blogged about them, I have worn them four additional times (two of which I still need to blog about), and each time they became a little bit closer to being completed.  First I whipped all of the seam allowances down on the inside.  Next I added welting to the seams, which I think gives them a nice finished look.  I used 1/4" wide petersham ribbon from my stash.  Finally I trimmed the excess material from the top and bottom edges, and bound them with 1/"2 linen tape. 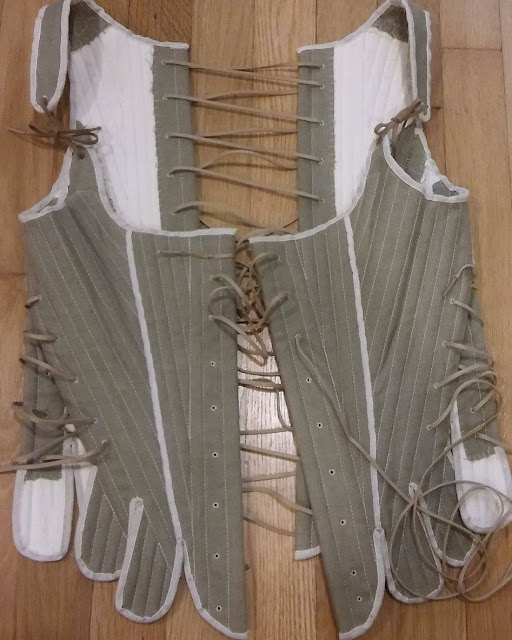 I also finished the ends of all of the cording pieces by wrapping them tightly with waxed thread and coating them in clear nail polish, to make lacing easier.  I had done about half of them before - all of the ones that were necessary to get them laced initially - but it felt good to have that final step done.

I did take a few quick shots on my phone after the Garden Party before I took they stays off, so here you can see me at 36 weeks: 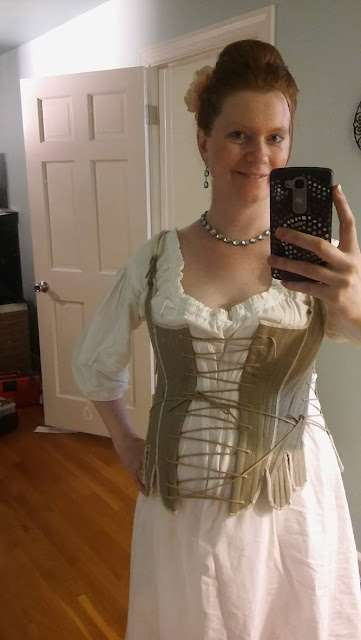 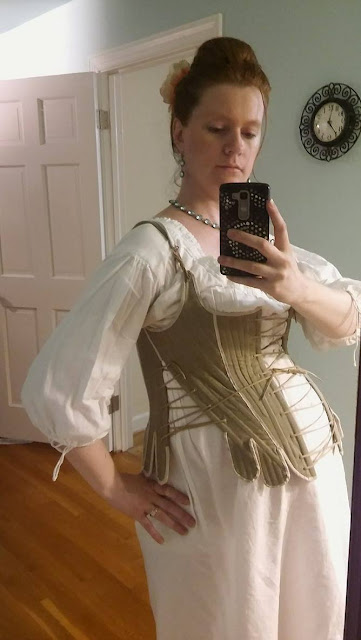 I also took a couple shots of the stays after I took them off, to show how much they had formed to my body by now: 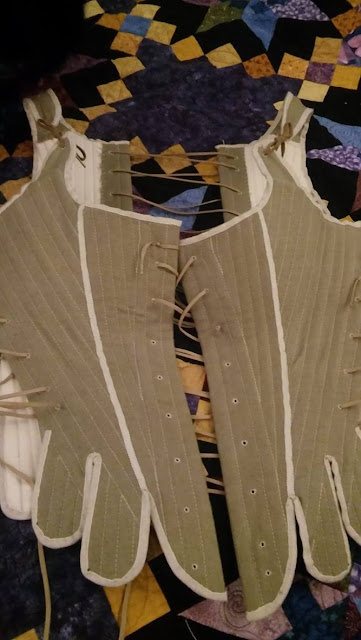 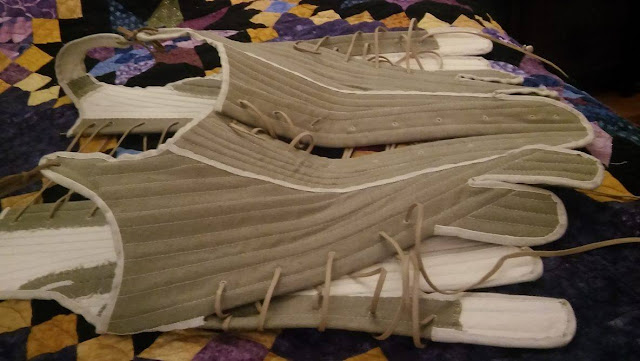 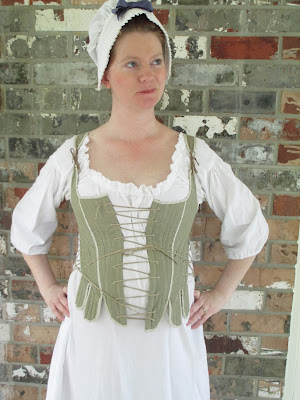 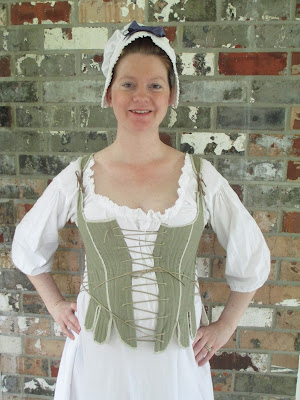 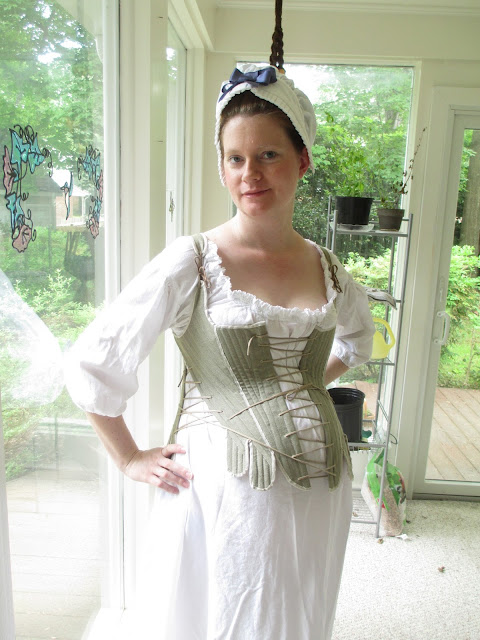 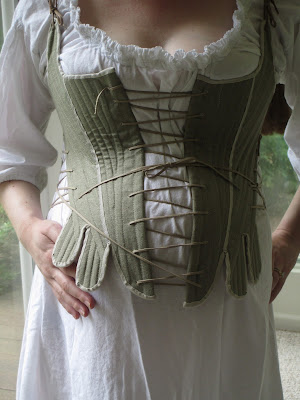 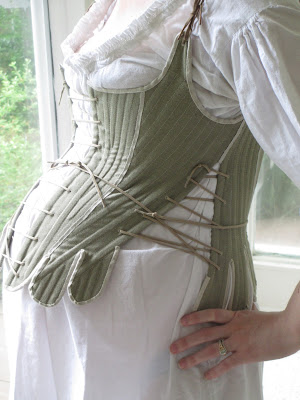 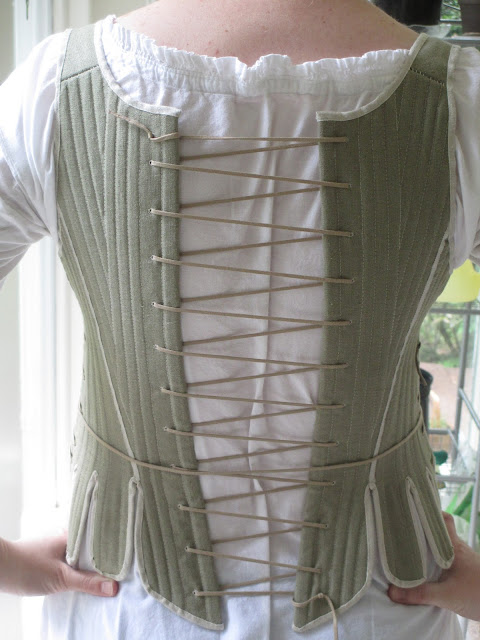 I haven't adjusted the back lacing at all since the first time I wore them.  The side lacing does all of the work: 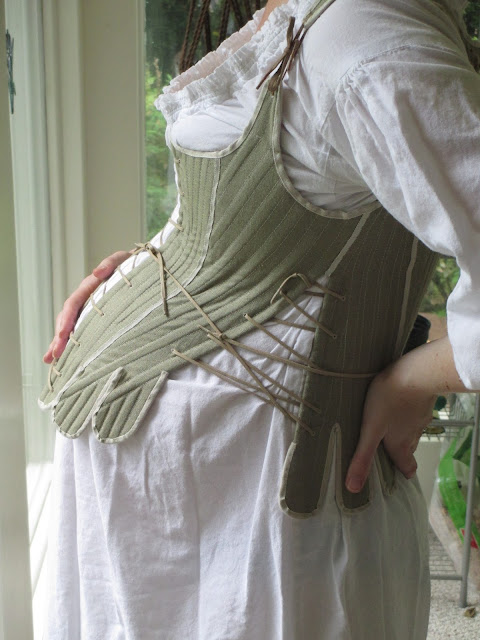 And the best part is that I should be able to wear them postpartum, as well!  With the sides laced closed they'll fit just like regular stays (in theory), and I'll still be able to adjust both front and back for my fluctuating size.  :)
Posted by Chelsea at 5:41 PM