Last weekend I attended the Mitts, Muffs, & Hoods workshop in Savage, Maryland.  I carpooled up with Melissa and Elyse, who both work at Colonial Williamsburg (and I'm just now realizing I didn't get pictures with either of them!  Shoot).  I had a lovely time!  I got to make new friends and hang out with fellow historical costumers I hadn't seen in almost a year.  Plus I learned some new information about staying warm in the 18th Century, as well as new sewing techniques to make my winter accessories more historically accurate. 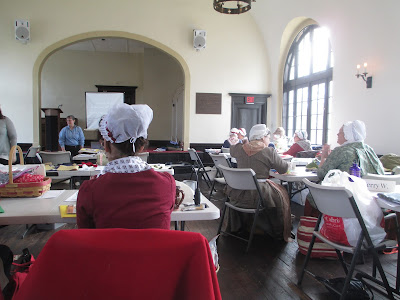 My table-mates for the day - Taylor and Carolyn: 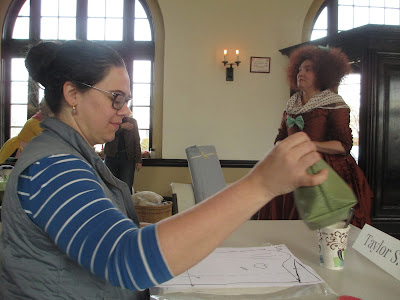 Carolyn was also the keynote speaker, and looked fantastic in her Italian gown! 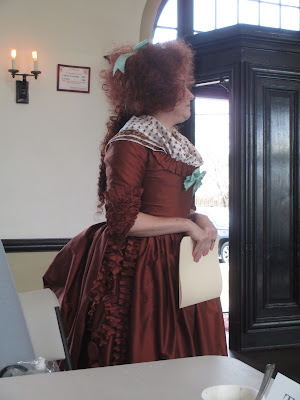 She talked about the various garments women of three different economic and social classes wore to keep themselves warm in 18th Century winters.  She had many examples in portraits and fashion plates - as well as some extant garments in museums - in a Powerpoint presentation. 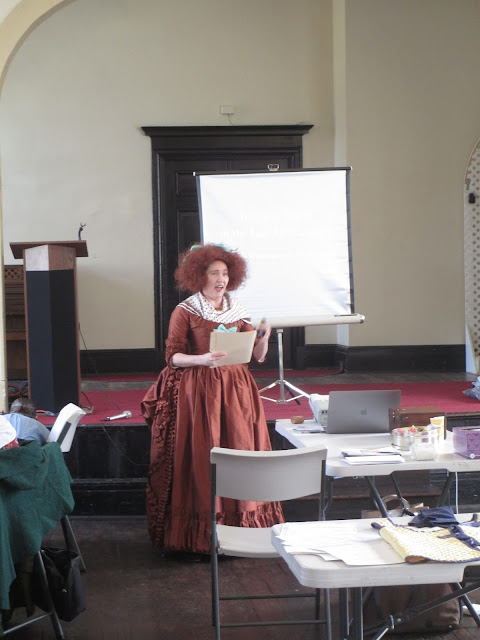 It was very informative and interesting.

Next, Vicki presented the Mitts portion of the workshop: 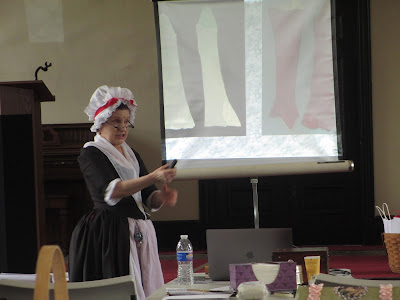 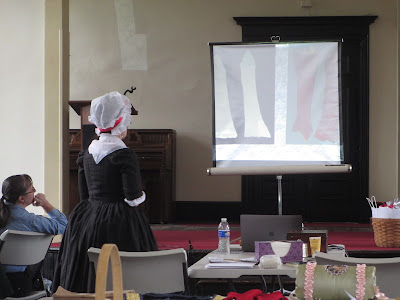 She had brought samples of three different sizes of a pattern for us to try on, as well as some finished mitts she had made.  I was especially taken with this embroidered linen pair: 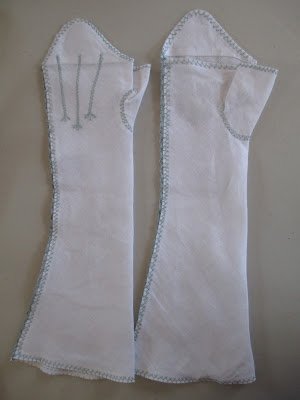 After we each chose a size to make, and Vicki gave us guidelines for any alterations we might need to make, we got to work cutting.  Taylor and I opted to lay ours out on the floor, as table space was limited: 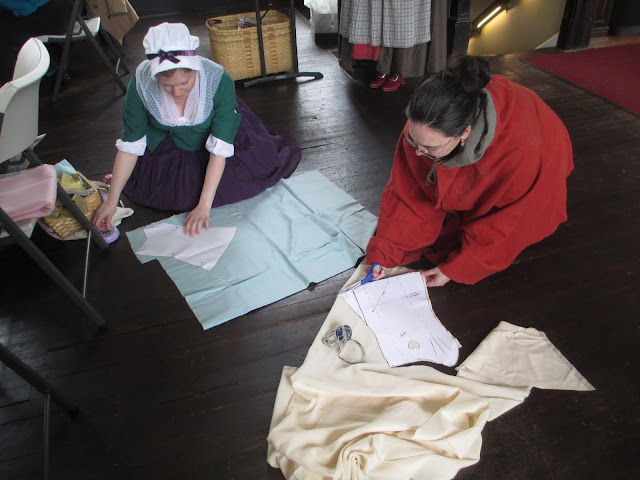 Vicki walked us through her detailed, step-by-step instructions with Powerpoint slides in addition to the printed directions in our handout packets.

Halfway through the Mitts portion of the day, we broke for lunch.  Did I mention they fed us really well all day long?  There were pastries, coffee, and tea for breakfast, a variety of sandwiches and veggies with fresh apples cider for lunch: 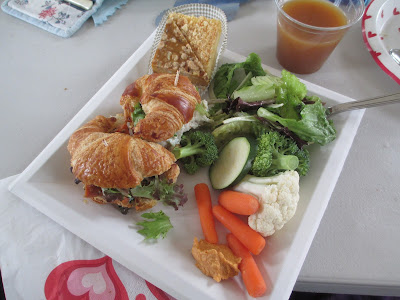 And dinner (which I did not take a picture of) was pasta and cooked veggies.  It was all very tasty, and there were desserts on top of all this!  Pregnant Chelsea likes to snack all day long, so this was pretty much heaven for me.  :p

After Mitts, we moved on to Hoods.  Ruth presented: 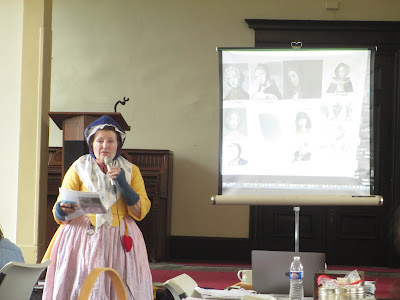 She had provided two patterns for each of us - a small, close-fitting hood and a larger, more fashionable version.  Both are meant to be a distinct garment, separate from a cloak (in fact, they can each be worn under a hooded cloak for an extra layer of warmth.)  She also provided a fitting muslin of the smaller hood for everyone:

She helped people with fitting, as the smaller of the two hoods is meant to be worn very close to the head, being a practical garment intended to keep the ears warm.

I chose to make the larger, fashionable hood.  I was enchanted with its over-the-top-ness.  Ruth had a sample she had made that we could try on: 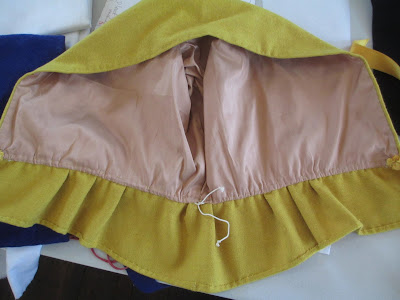 The front edge can be folded back to show the contrasting lining around the face, and the drawstring at the neck can be drawn up for a closer fit.  I also loved the little cape/peplum option. 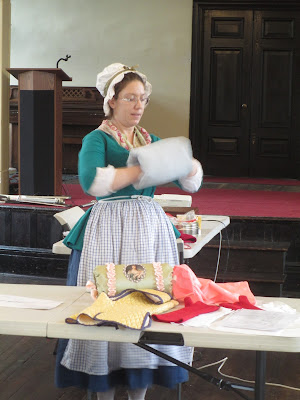 This was where we all got to have a lot of fun with trims and embellishments!  Check out this example:

Sarah walked us through the construction of a basic muff base and a removable, embellished cover.  She talked about historically accurate options for filling the base, such as wool roving and down.  One thing I learned was that often the muff bases were just a flat "pillow" that you could roll up to slide inside a cover, which makes it more versatile if you have muff covers of different sizes.  Also, a flat pillow takes up less space in storage than a round base.

I had brought my muff base (stuffed with very period-inaccurate poly-fil) and the first cover I had made for it, and I had originally intended to just make a new cover for it.  But now I want to make the flat pillow style, stuffed with wool roving!  A couple of the participants had brought wool that they were either selling or giving away, so I got enough to make myself a new muff base.

I will blog about all of my projects from the weekend separately, as soon as they're finished!  That's right, I didn't complete a single project all day.  I was very productive, though!  They are all in various stages of completion.

Here are some aerial shots of the participants hard at work: 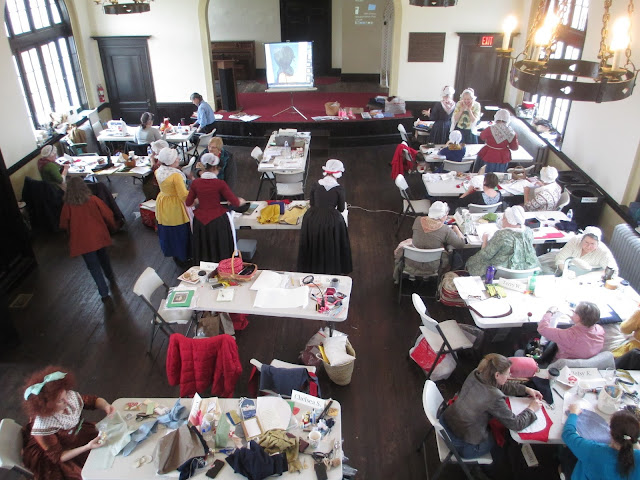 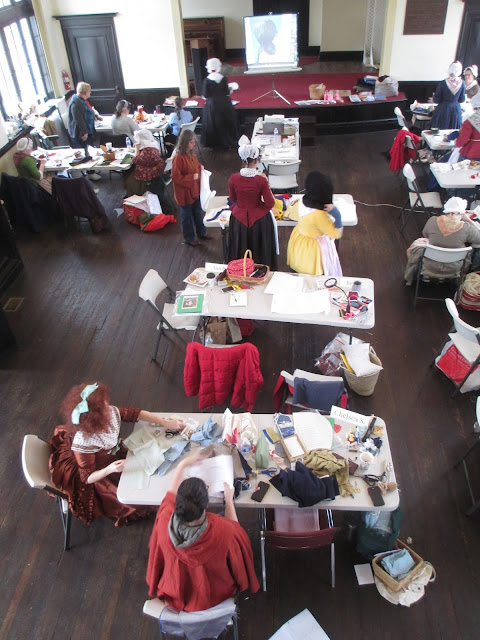 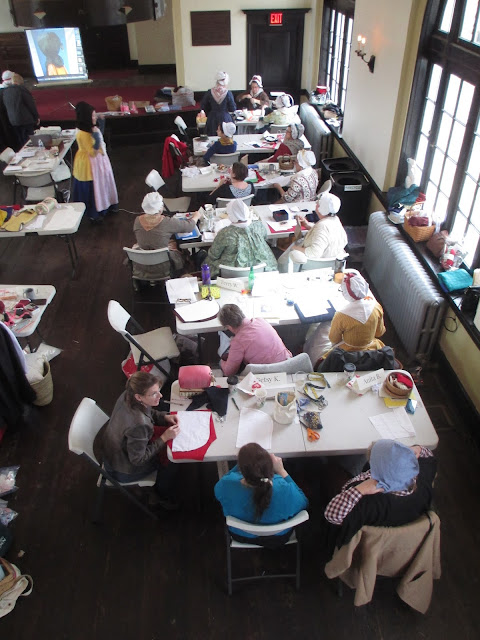 This building - Carroll Baldwin Hall - was built in the 1920s as the Town Hall (I believe), and has a very lovely Colonial-revival style.  I loved the big windows that let in so much natural light! 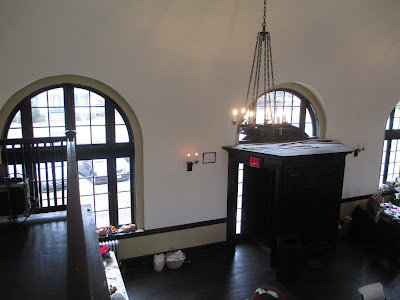 Here is the whole group outside the hall: 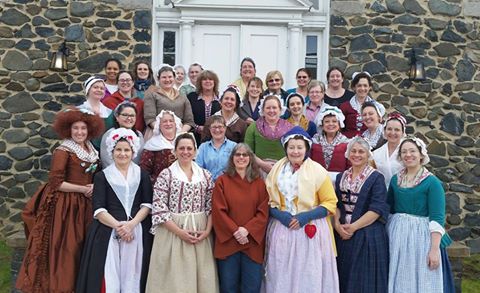 Oh, and here is the maternity outfit I ended up throwing together (Taylor was kind enough to take some photos for me): 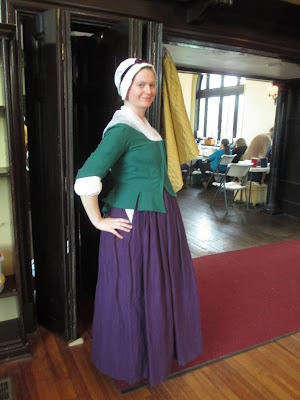 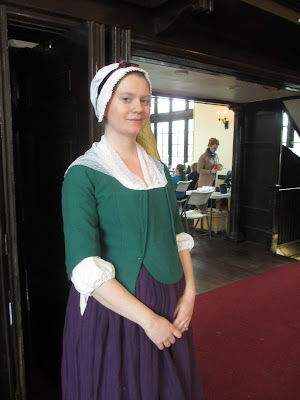 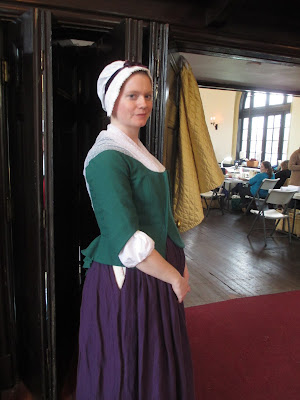 As you can see, my petticoat gaped a bit at the pocket slits - which made getting into my pocket a bit easier, actually!  If I had had time, I would have made an apron to cover the front and sides so you wouldn't notice, but oh well.  As it was, I barely had time to throw together a stomacher for my Green Jacket.  I ended up just making the shell of one, slipping my newly-made block-printed stomacher inside, and stitching the top closed!  :p  But it worked.  And I've already blogged about my maternity stays and how comfortable they are.  I seriously might start wearing them as a daily thing!
Posted by Chelsea at 12:49 PM