I Could Have Danced All Night

I had to work on Saturday during the day, so I put my hair up in pin curls the night before, taking them out in the morning after they were dry.

I then had to figure out some way to put it up so that it would still look good after a full day of work.  I started by pulling most of my hair up into a high ponytail, leaving two sections at the front free.  Next I divided the ponytail into a front half and a back half, creating a loose bun with curly ends sticking out from the front half, and an even looser "poof" with curly ends from the back half.  I twisted the front sections back and pinned them up into the bun with the ends hanging down, to create a look of carefully orchestrated chaos.

I carefully planned my accessories, as I wanted to be as period-accurate as possible.  I have very little "real" jewelry in my wardrobe, but I wanted to be authentic.  With this in mind, I decided to go with a charming coral necklace that was once my grandmother's, along with tiny diamond earrings that my other grandmother (who owned a jewelry store) gave me when I was a baby.  Both have real gold settings, so I felt they were as authentic as I was going to get.

And of course I wore my adorable new slippers, which I had dyed, painted, and decorated with ribbons.  They were so fun, though!  And I got quite a few compliments on them.  :) 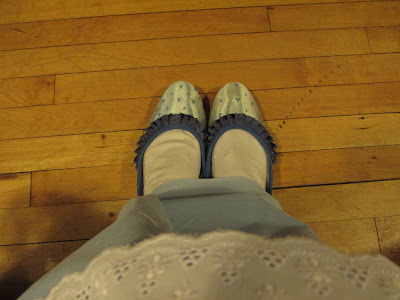 Now for the dress!  Well, dresses.  :p  I'm glad I decided to make them separate, so I can always wear the blue one alone, or the white one over another dress in the future.  (If you missed any of my making-of posts, look here.) 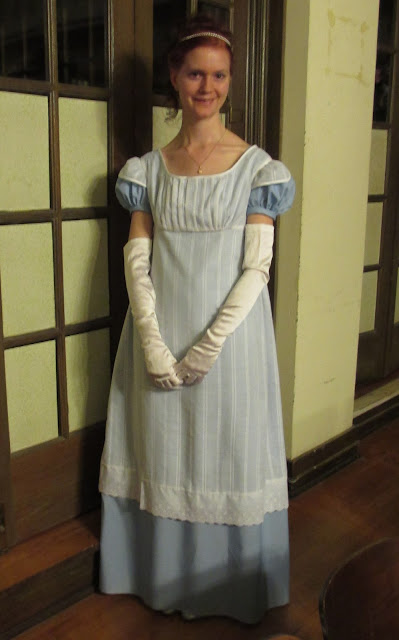 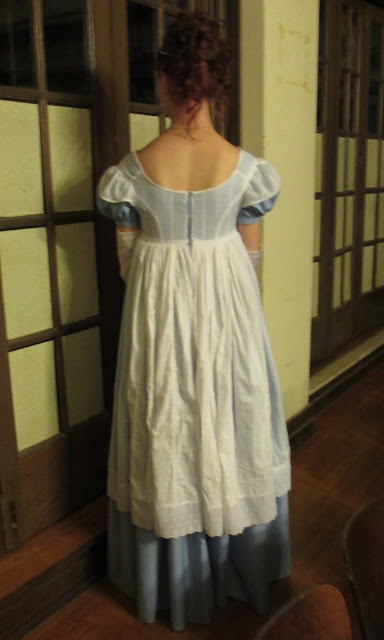 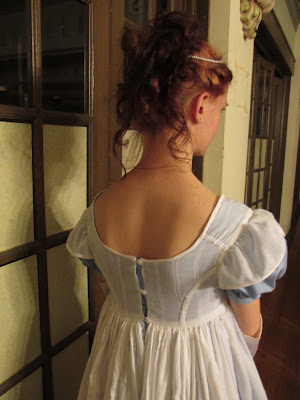 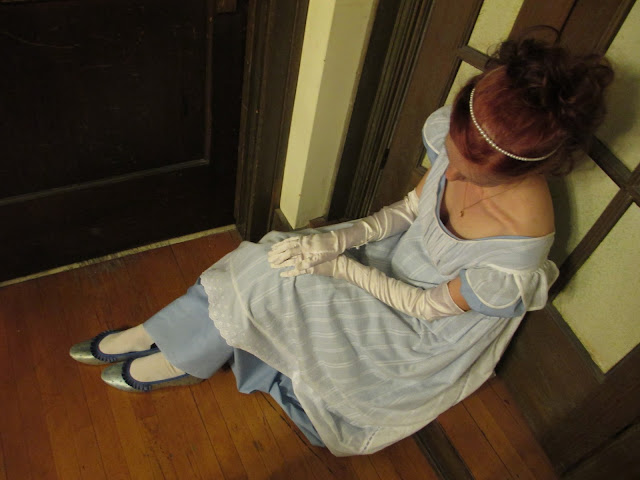 The ensemble turned out the be pretty comfortable, aside from the fact that I couldn't raise my arms above shoulder-height.  :p  Having no Regency stays (yet), I wore it over a white tank top with a built-in bra.  I also wore a knee-length petticoat with a small ruffle, which kept my long skirts from getting caught between my legs as I walked and danced.

I attended the ball with my cousin Melissa (in white) and our mutual friend Meghan (in white and green).

I was very impressed by nearly every aspect of this ball.  There was so many people there! 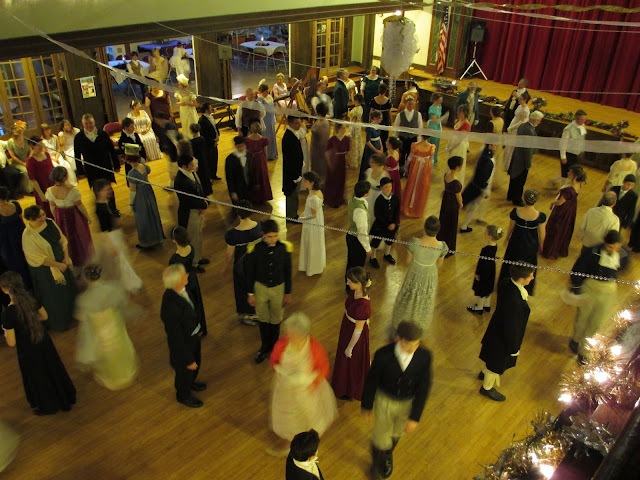 And almost everyone was wearing proper period attire, or at least a reasonable facsimile. 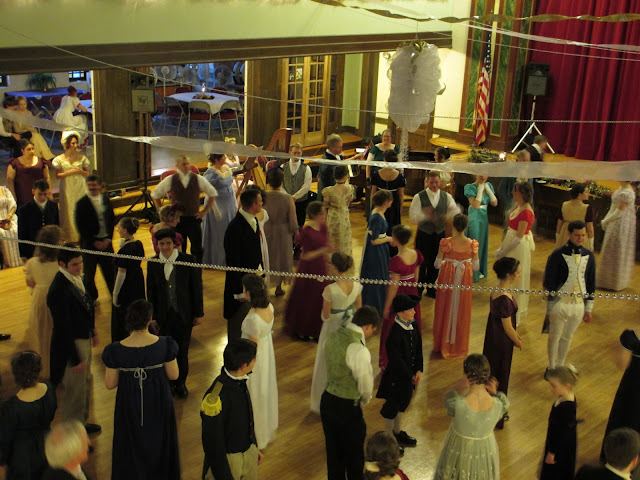 I had as much fun watching the dancing as I did participating.  The music was live, which as a lovely treat. 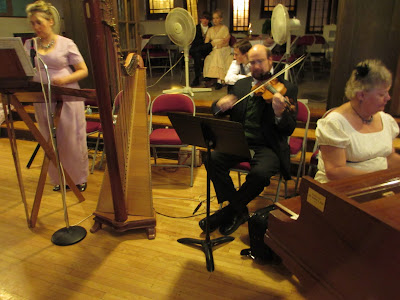 The dancing was taught and led by a Dance Master, who first instructed us on the various sequences we would be performing, then called out the movements in time with the music after we had learned them.  My favorite dance was the Cotillion (I believe), which was essentially a square dance.  It had a refrain and several verses, and was marvelously complex from an outside perspective, but quite easy to perform once you knew the movements.  I wish I'd gotten a video of that one, but I didn't think of it until too late.

I had endless fun critiquing all the lovely dresses I saw, as well.  I was most impressed with the ones that I could tell were made in the apron-front style, especially as I have yet to complete mine!  :p


(If any of these pictures are of you and you don't want me using them, please feel free to contact me and I will take them down.)


There was also food!  Everything was yummy:

They also had a big punch bowl full of water with lemon slices, which was very refreshing and necessary!  All that dancing got me rather warm, especially as both my arms and legs were encased in silk!  And I learned that everything is slippery when you're wearing satin gloves...

I also got a dance card, but I didn't use it: 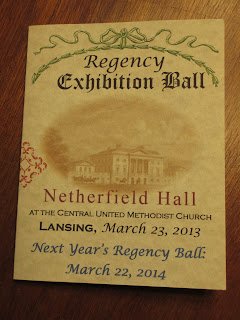 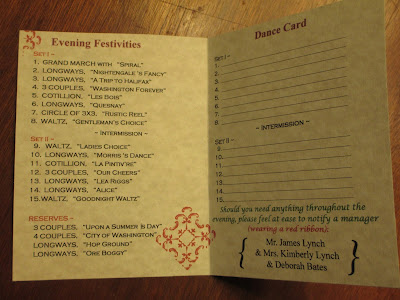 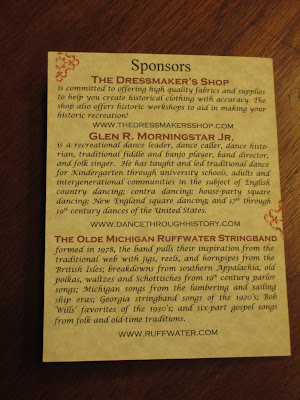 I didn't use the sonic screwdriver either, but it was always on hand should the need arise!

Now I just need to make a spencer, a bonnet, another dress, more shoes, an embroidered shawl, and oh yes - more excuses to dress up in pretty dresses and go dancing!