For Day One of our Jane Austen tour, I wore my newly-(almost)-completed Black & Ivory Striped Gown: 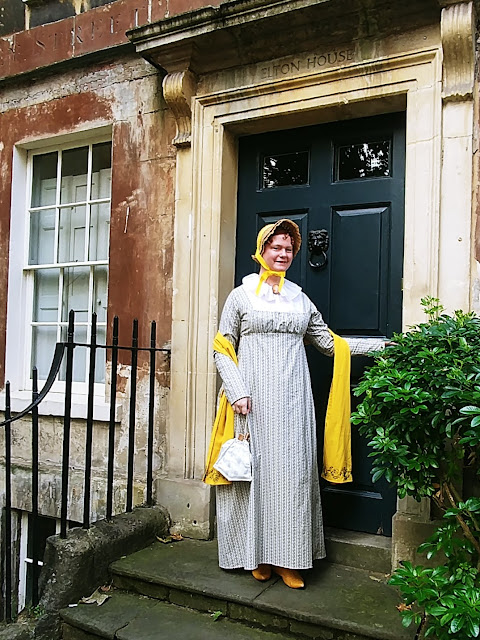 I accessorized with my yellow embroidered shawl, yellow painted boots, and one of my straw bonnets with a yellow ribbon. 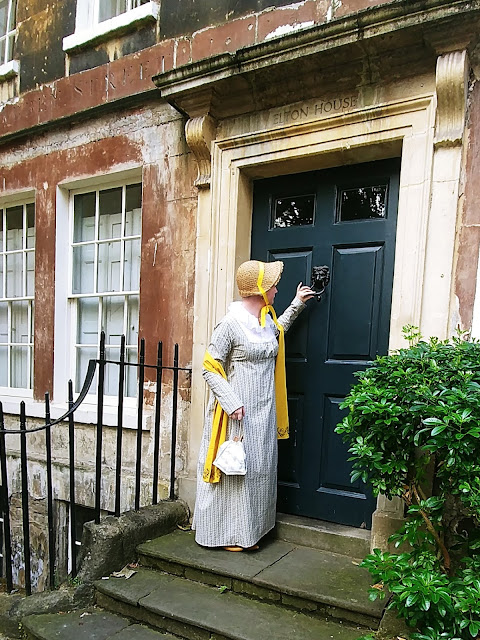 I wore all this over stockings, my low-necked shift, my newly-(almost)-completed stays, and my ruffled chemisette. 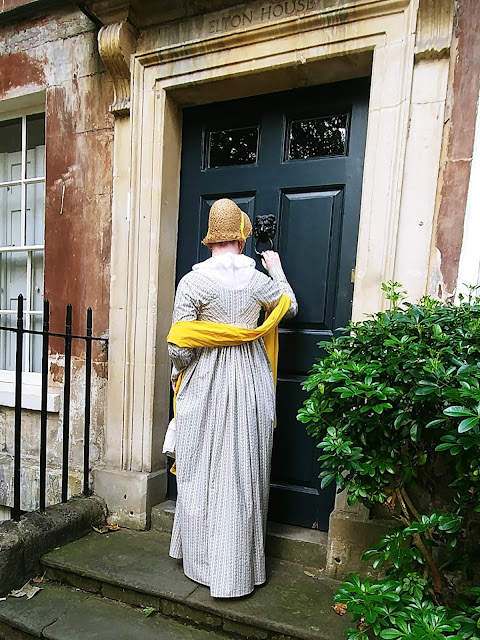 My jewelry, which is hard to see because of my bonnet, consisted of green glass cameo earrings from Dames a la Mode, and a cameo brooch at my throat. 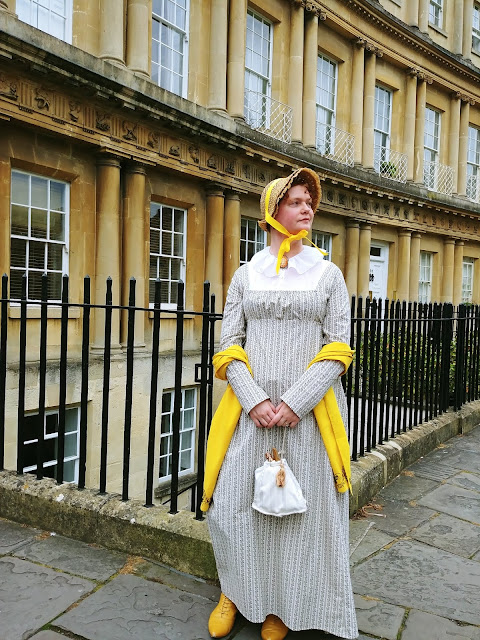 I carried my ivory striped reticule with me all week.  I had planned to make a new (bigger) one that would fit my fan and my sonic screwdriver fully inside, but I never got to it. 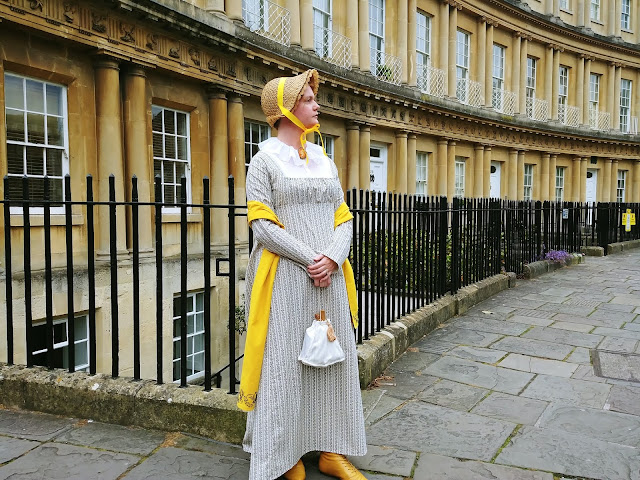 I had such a lovely time wearing my favorite new Regency dress in such beautiful locations: 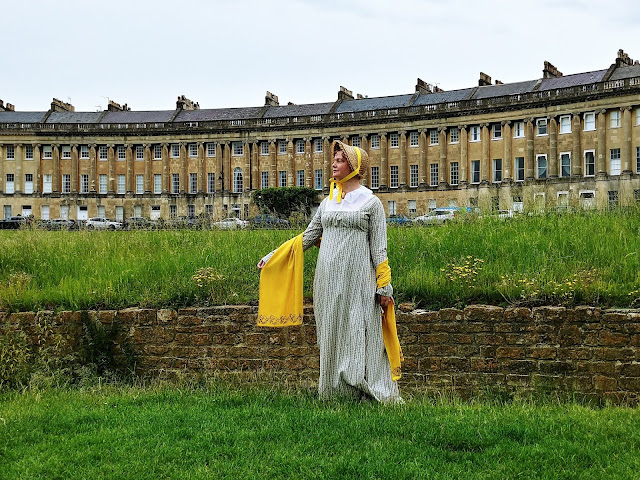 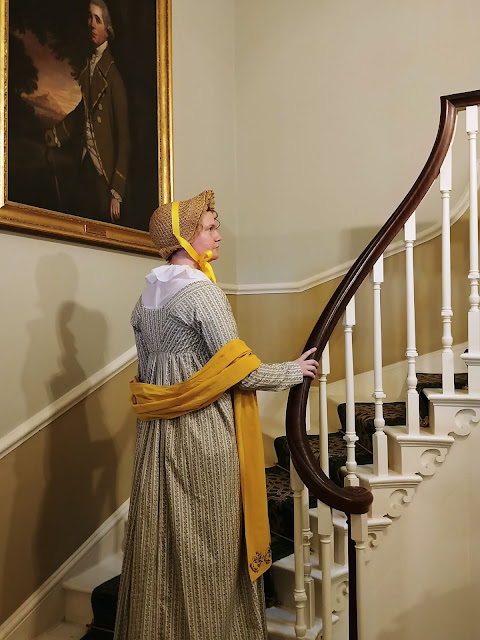 I was glad I bought a travel umbrella before the trip, even if it was a bit of a pain to carry around.  Heather and I both made use of ours in Bath: 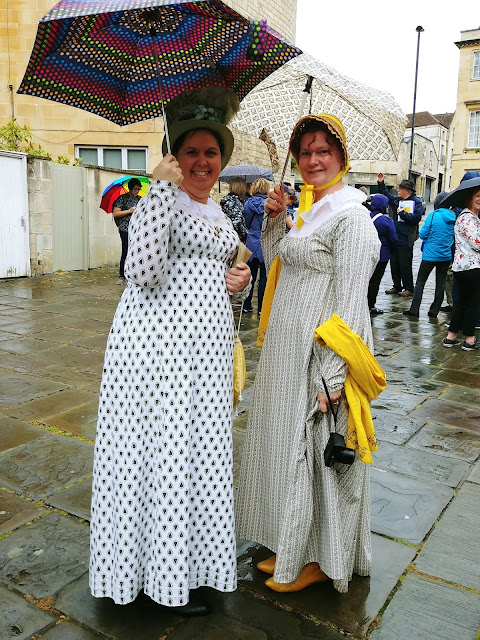 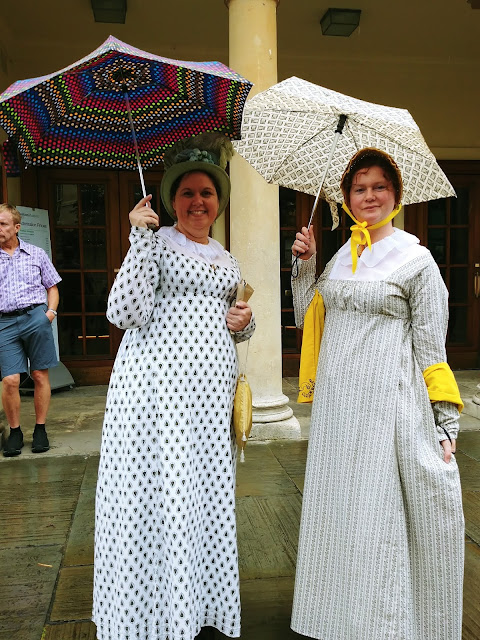 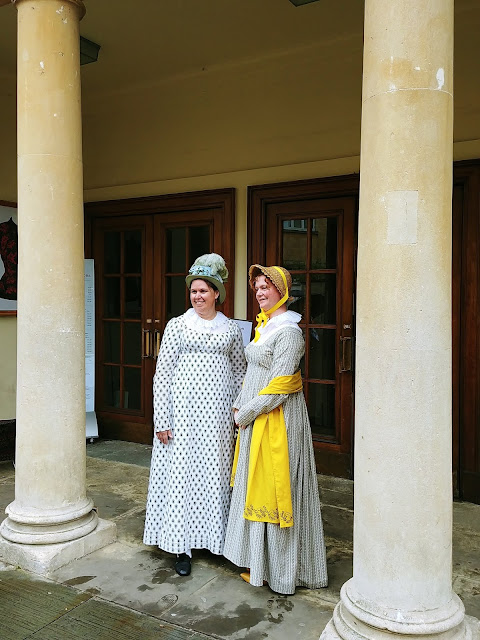 Bath feels like a very historical city because of the architecture, but it is as modern as anywhere else. 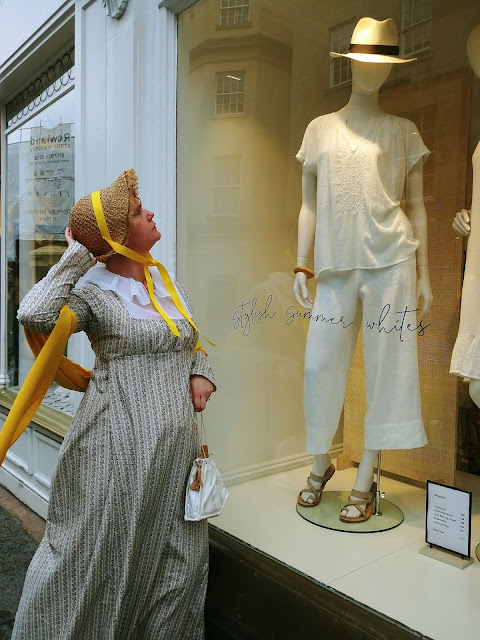 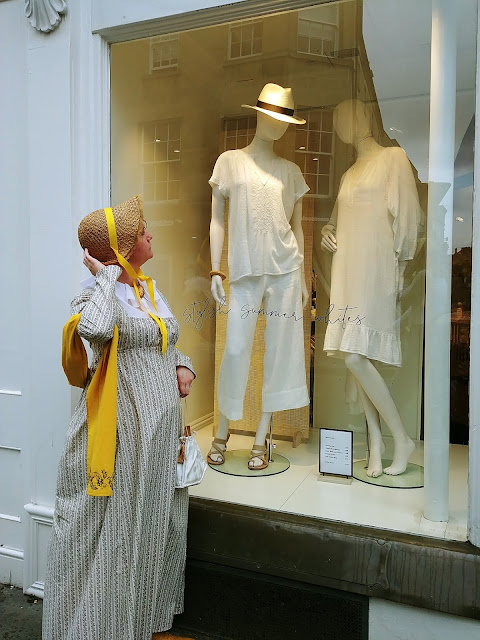 I loved the charming little garden in the backyard of Elton House, and had to get some photos in it: 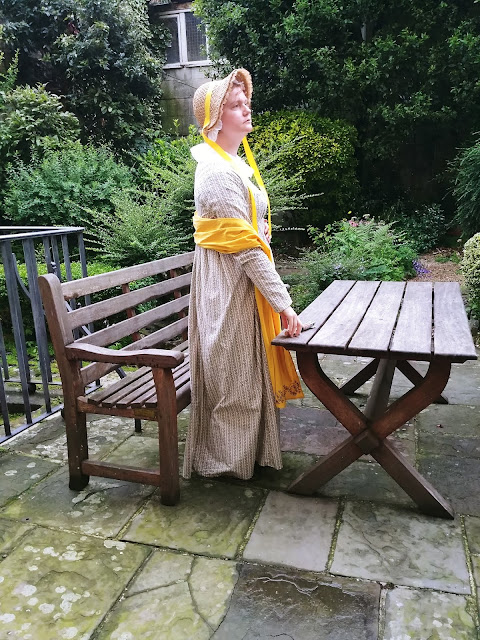 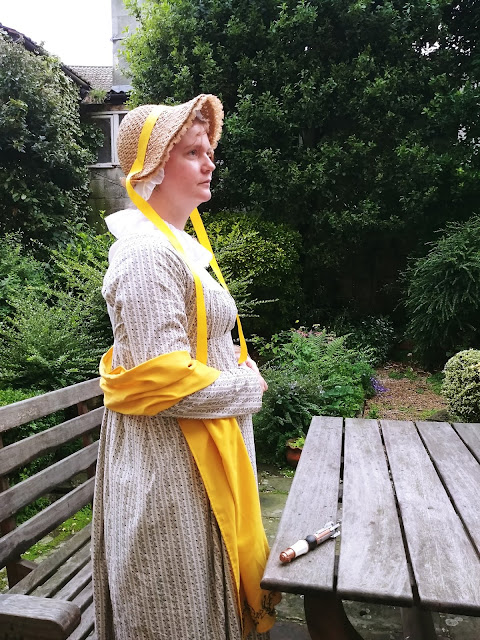 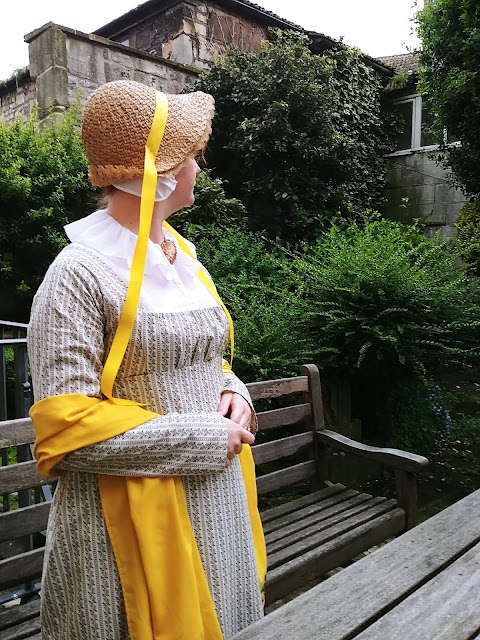 I sooooo love the back of this dress! 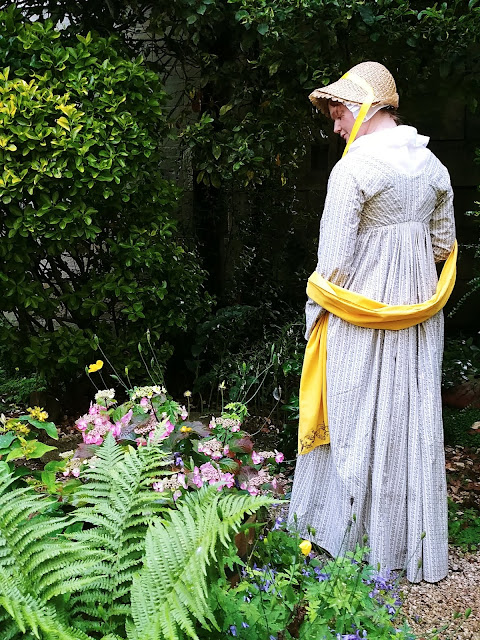 I had to check out the statue in the garden, to make sure it really *was* a statue: 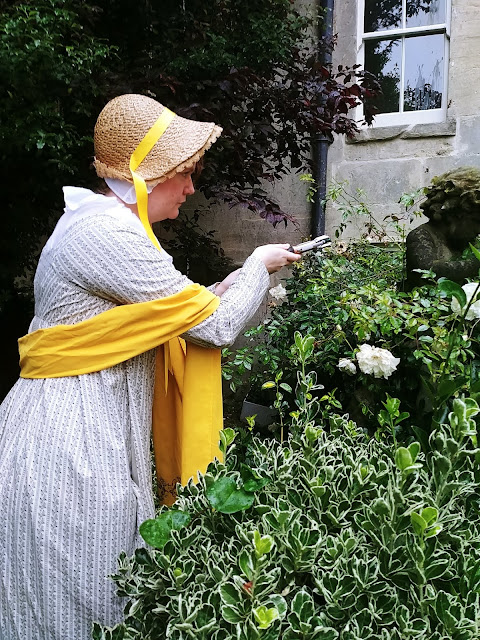 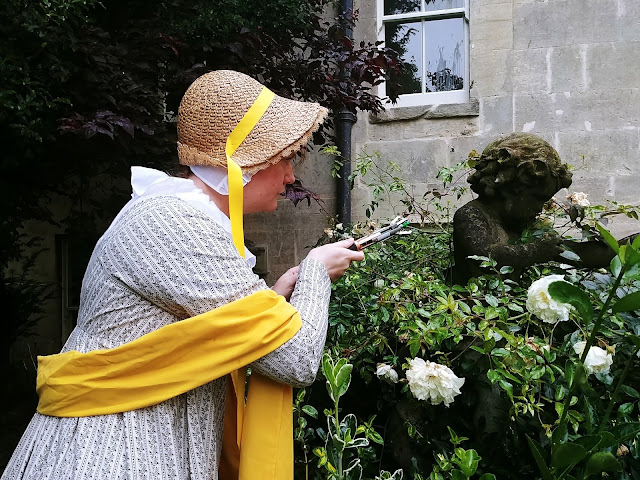 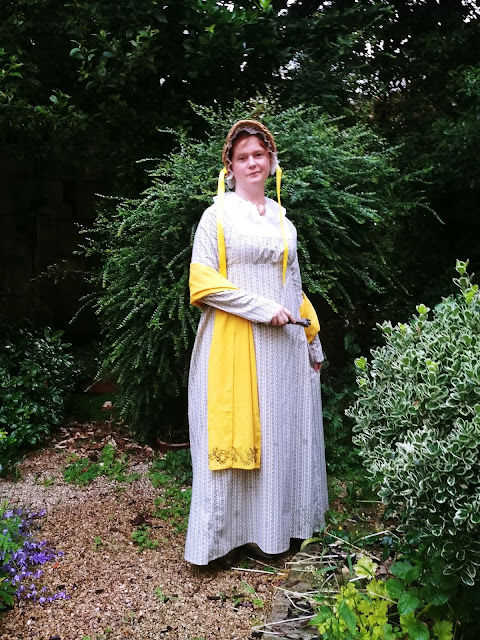 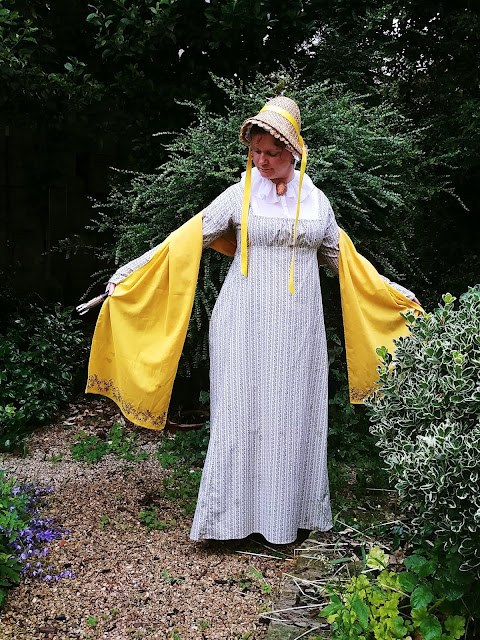 Now when I say the dress is *almost* completed, what I mean is that it was pinned in place in more spots that it was supposed to be.  :p  It's a drop-front dress, so it is supposed to be pinned at the top of the bodice, but I had meant to add some sort of fastening at the top of the skirt front, as well.  This is normally done with ties that wrap around the back and come back to the front to tie under the bodice front, but I was planning to do buttons instead.  I just didn't get it done in time for this first wearing.  I used straight pins to fasten the top of the skirt front at the waist.

The stays were also *almost* completed - I got all the eyelets done the day before!  But I had not attached the shoulder straps at the front, because I had not yet had an opportunity to try them on.  So I safety-pinned them in place that morning, put them on and adjusted from there.  But once I was all laced in, I really didn't want to take them off just to tack the straps in place, so I just left them pinned for the day.
Posted by Chelsea at 6:02 AM