I haven't blogged about the bustle or petticoat for this ensemble yet, even though they were among the first things I made! 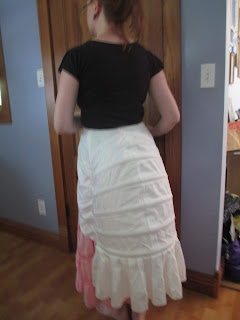 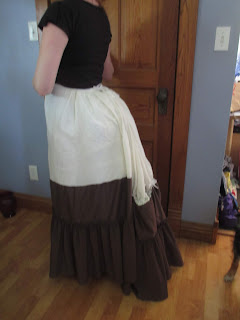 For the bustle, I used Truly Victorian's Imperial Bustle pattern, TV163.  For some reason I can't quite explain, this part of the ensemble seemed very daunting to me up until I actually started making it, and then I wondered why it had intimidated me for so long!  It went together SO quickly - I made it in an afternoon while my daughter napped!  So I shall no longer be intimidated by bustles.

(This was May 8, according to the date on my photos.)  I made it from cotton sateen leftover from the curtains I used to make the Gold Galleon Gown, and I used 1/2" flat oval reed boning for the wires, because that's what I had on hand. 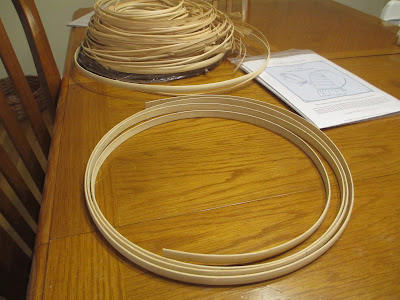 I like using reed, because it's easy to cut and doesn't need to be tipped.  I just sand down the corners and any sharp edges or splinters with a heavy-duty nail file.  I've found it to be fairly sturdy, and it's nice and lightweight.  I've used this reed before in my pocket hoops, and it worked great.

I measured the length I needed to cut for each of the seven wires, and marked and numbered them all before cutting them out: 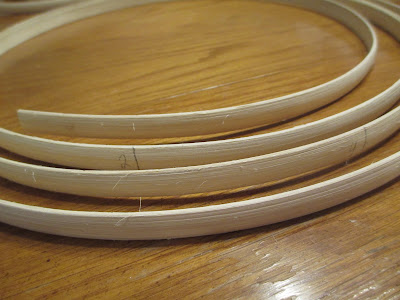 I got all but one piece out of one long, continuous strip!  Numbering them helped me keep track of which one went where. 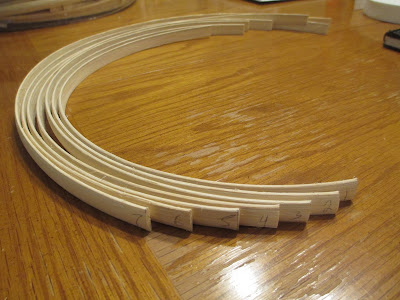 I have no pictures of the bustle in progress, because I just followed the instructions and it went so quickly!  But here it is on me: 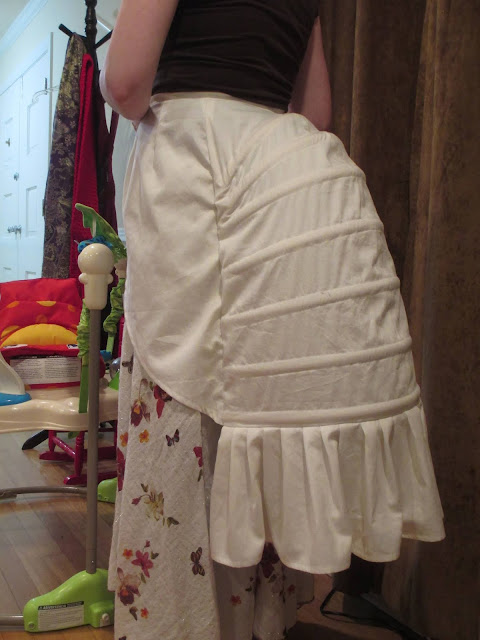 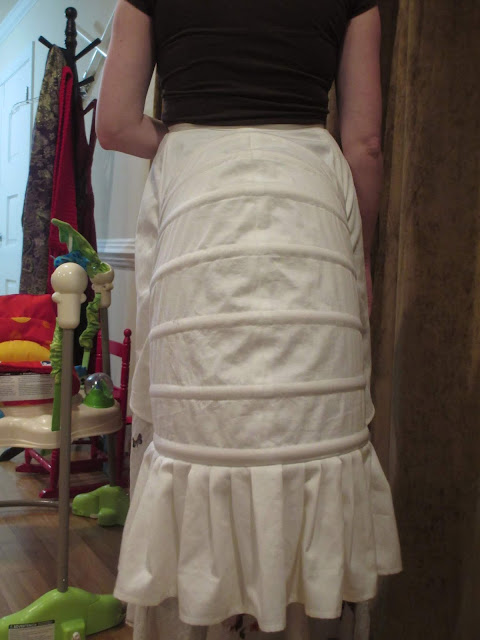 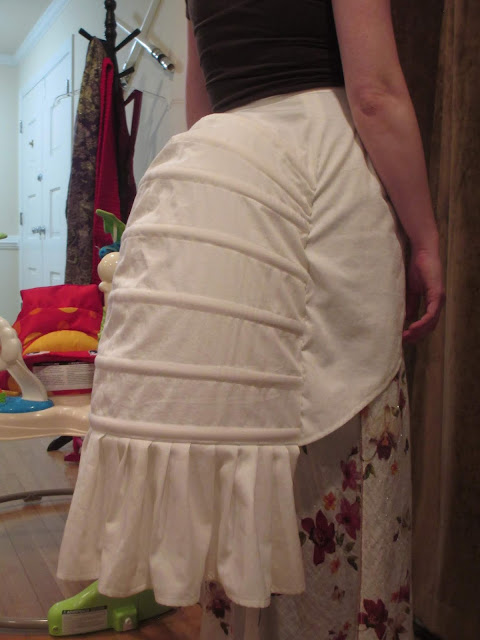 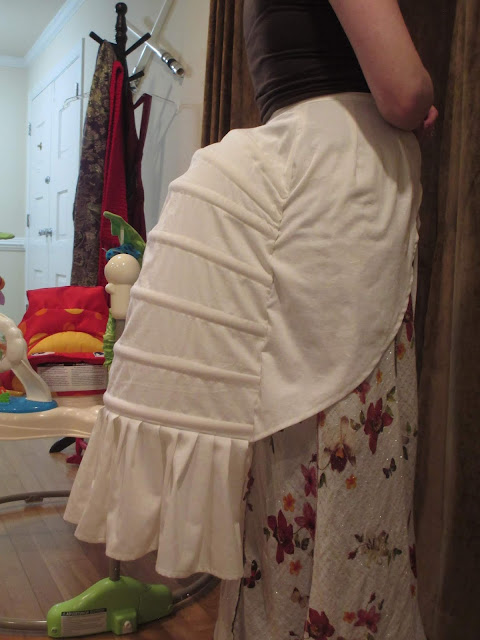 I was quite pleased with it, and ready to tackle the underskirts!

My other skirt support was actually made almost six years ago... 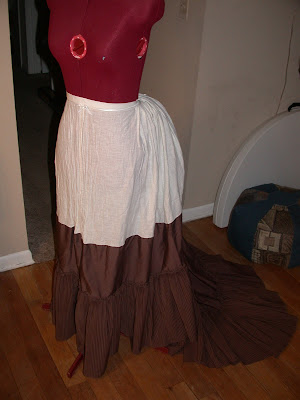 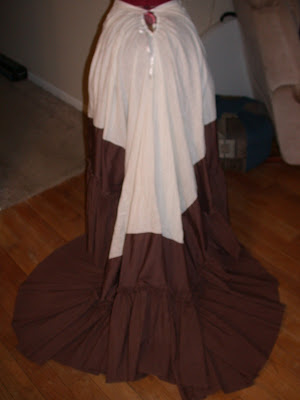 At the time, of course, I had no real plans for any Victorian ensembles, and I hadn't even been sorted into Hufflepuff yet!  I had envisioned making a gown someday that would use this as an underskirt - and I still may do that - but for now it worked very well as a humble petticoat.

First it needed some modification, however.  I was not making a gown with a train, so I needed to de-train the petticoat.  However, I wanted to leave the possibility of using the train later, so I wanted to make it adjustable.  After some trial and error, I found that by pulling up the seam where the brown and white fabrics meet to bring that line up to the same level all the way around, I made the hem level: 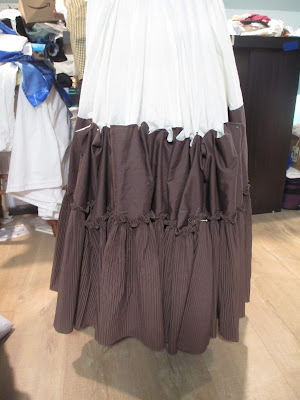 I pinned it at several points to the white fabric, and marked those points.  Then I took it off the dress form and drew a semi-circular line connecting all the points (no pictures of this).  I measured to find the halfway point on this line, and then the two quarter points on either side. 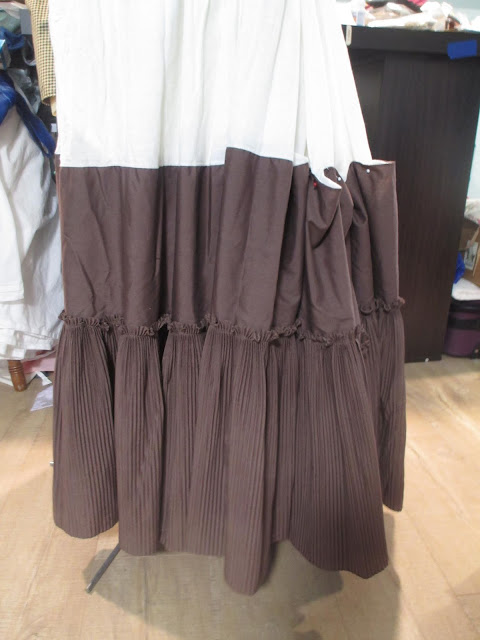 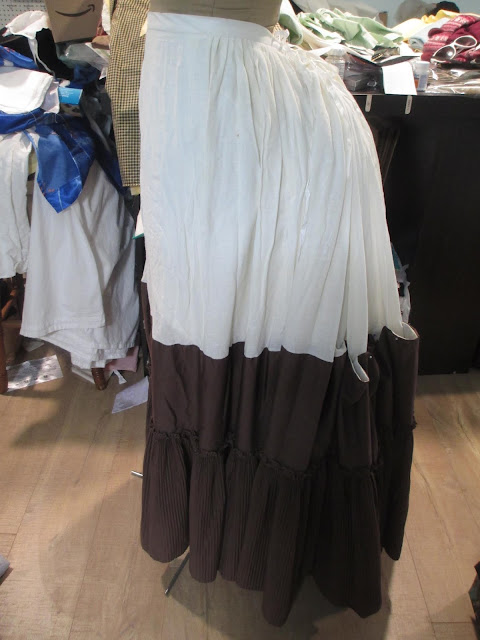 I found the corresponding points on the top edge of the brown fabric, where I would bring it up to meet the drawn line, and marked them with pins.  Then I tacked 1/4" wide twill tape ties to each attachment point along the line, reinforced underneath the fabric with little squares of a used dryer sheet.  (The white fabric is not terribly sturdy, as this garment was originally a bedskirt. It was never meant to take much strain.  Also it's very old.) 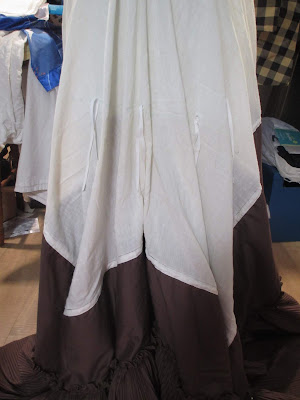 Then I sewed a bias tape channel along the top of the brown fabric, forming a casing for a drawstring to bring in the excess fullness along that edge, essentially creating a ruffle: 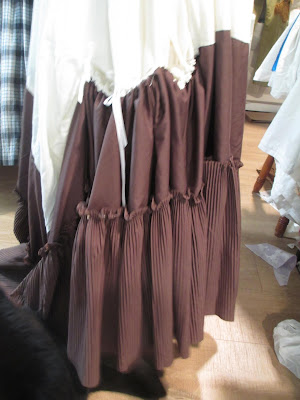 This way I can draw up the drawstring and tie the twill tape up at the corresponding points.

Jazz enjoyed rolling around on the train: 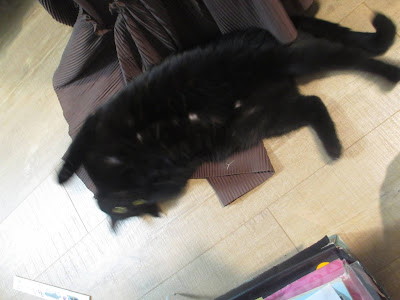 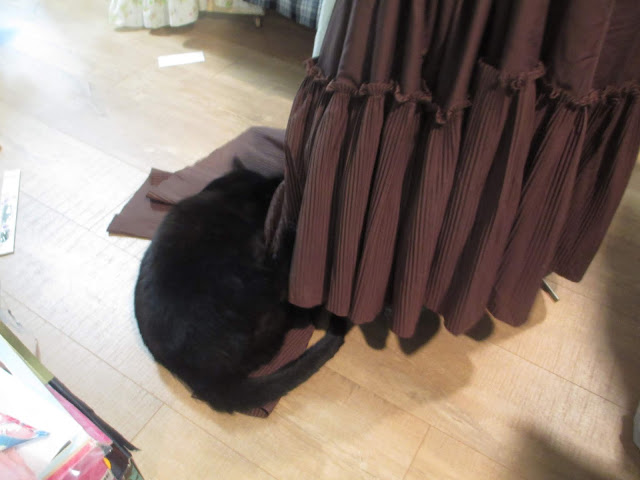