Things have been slow on the blog lately, but I intend to rectify that.  I have much to blog about!  Once again, I spent the majority of my summer in Iowa.  This time I flew (with the little one) and had limited packing space.  I only brought a select group of projects that I could reasonably expect to have time to work on, and my Hufflebustle.  The gown itself hardly takes up any space to pack!  It's all silk taffeta, after all.  The petticoat takes up more room than the entire rest of the ensemble! 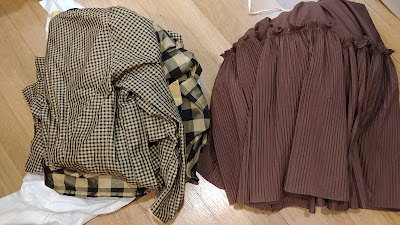 But I had a good reason for bringing it, which you'll see soon.  There is a beautiful restored Victorian house in my hometown, and now that I finally have a Victorian gown, I needed pictures of me wearing it in front of the house! (There's a sneak peak of the photo shoot on my Instagram - I'll post many more photos soon.)  Before I could do that, however, I needed to finish up a few things.

I detailed all of the finishing details I still needed to do in my last post about the gown, but I'll summarize here:


Underskirt:
Overskirt:
I still need to add the boning to the bodice seams, line the back of the overskirt, and add the hooks and eyes to the placket, but everything else is now done!

Adding the ruffle to the underskirt had the biggest impact.  The interior ties also help a great deal in creating the proper historical silhouette: 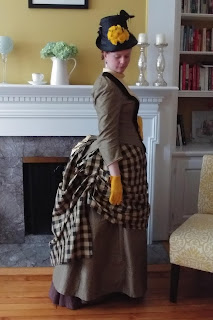 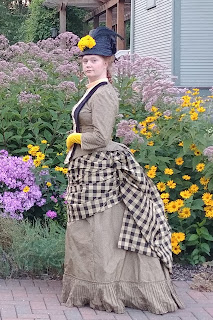 Big difference, right?  It's possible that the ruffle is just a skoch* too long, and I still want to get more "poof" from the overskirt in the back, but overall I'm much more pleased with the entire ensemble.

The ruffle took a very long time to make, because I could really only work on it while Reptar was napping.  I had measured my hem at 102" around, and I wanted at least a 2:1 ratio for the ruffle.  I cut three strips 9" wide and as long as possible from my remaining micro-check silk, and stitched them together end-to-end to make one strip 116" long.  Normally for a ruffle I would make a tube, then find the center points of both the ruffle tube and the skirt tube and pleat the ruffle down using the divide and conquer technique, but I did this one differently.

Before I began pleating, I hemmed the strip along the bottom, overlocked the top edge, and turned it down 1/2" to give a nice clean fold.  Then I spent hours and hours pleating!

I was very precise with my pleating, as I wanted to follow the lines in the check.  I made each pleat 2 lines deep, 4 lines apart. 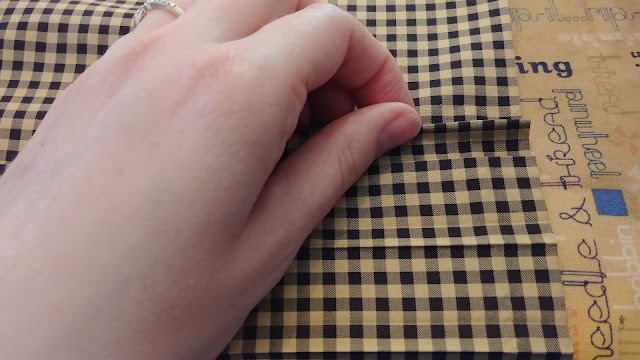 I lined up each pleat carefully so that the pattern of the check was preserved: 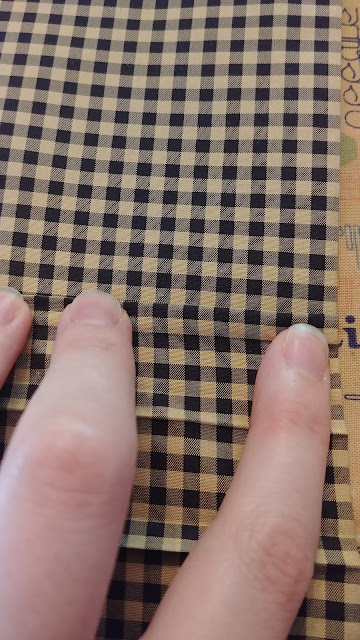 I pressed each pleat once, then after I had three in a row I pressed all three again. 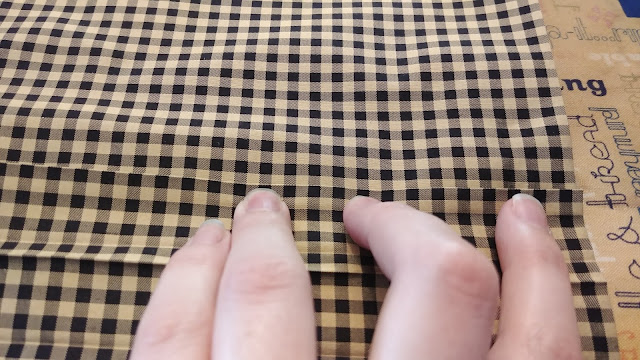 Then I used a Q-tip to apply a vinegar/water solution to each crease before pressing the three of them once more.  This sets the crease really well, and makes it nice and crisp.  I found that three at a time was the right number, because I could easily manage holding them in place for the iron but also feel like I was making good progress.

It took a loooooong time!  I couldn't work on it while Reptar was awake, because she tended to want to be right next to me, tugging on the iron cord.  So I found it best to only work on it while she was napping or down for the night.  And then after I had gone the full length of the ruffle, FINALLY: 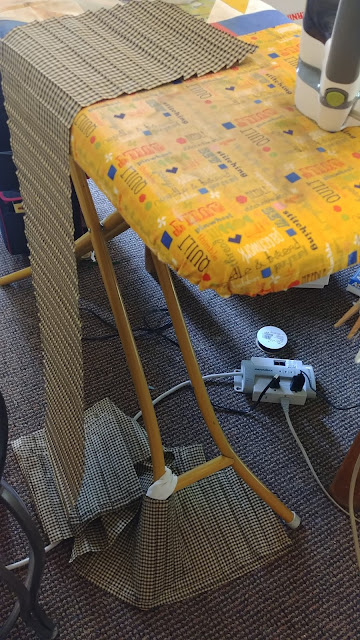 I realized that I needed to go back and press all the pleats again, because I had only applied the vinegar solution to the TOP creases of the pleats, and not the inside ones.  You can see the difference here:

Fortunately, applying the vinegar to the inner creases and re-pressing them took much less time than pleating them the first time around.  I soon finished this and had 108" of beautifully pleated ruffle! 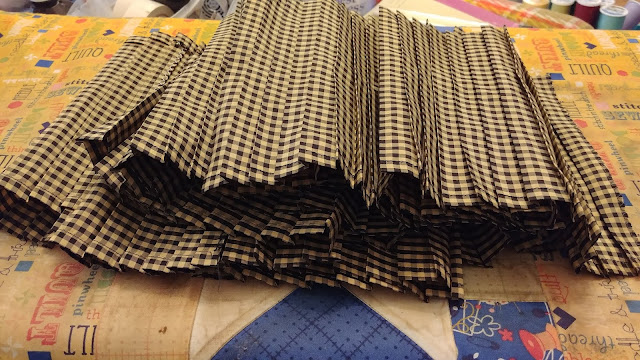 I basted the pleats in place along the top edge, using my mom's old Singer sewing machine that was my grandmother's: 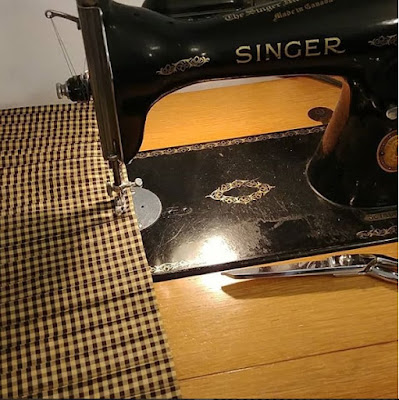 I basted right along the lower edge of one of the black lines, being sure to catch the folded-over inside edge. 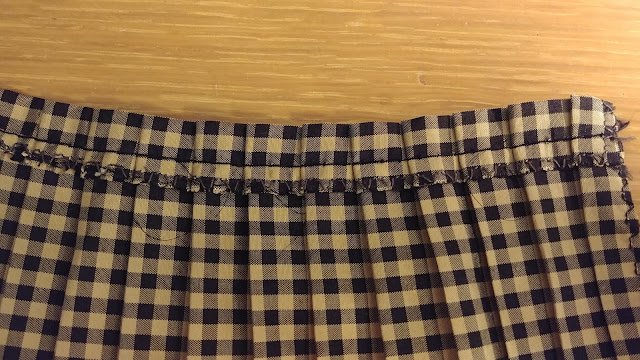 Once the basting was done I had my mom help me pin the ruffle in place, since I needed to be wearing the skirt over the bustle and petticoat and wearing the proper shoes. 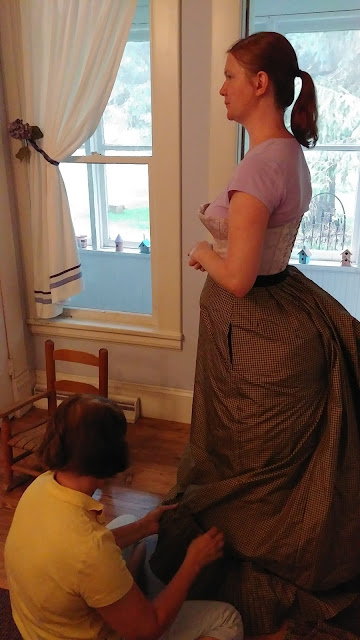 It was also important to have the interior ties of the underskirt tied over the bustle, which I hadn't had the first time the hem was marked.  I think that's a big part of why it was too short in the back. 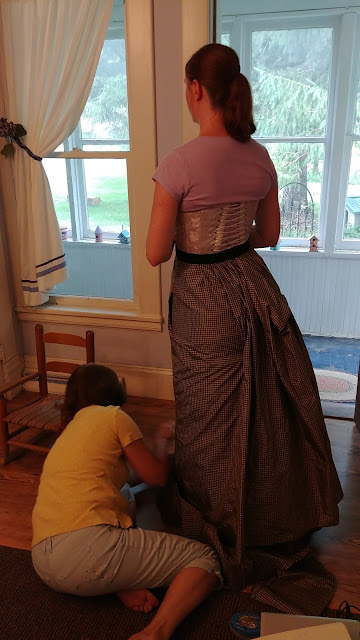 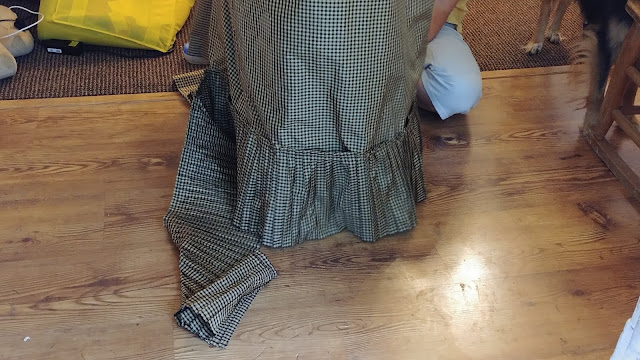 Mom and Dad's dog, Arty, wanted to help, too. 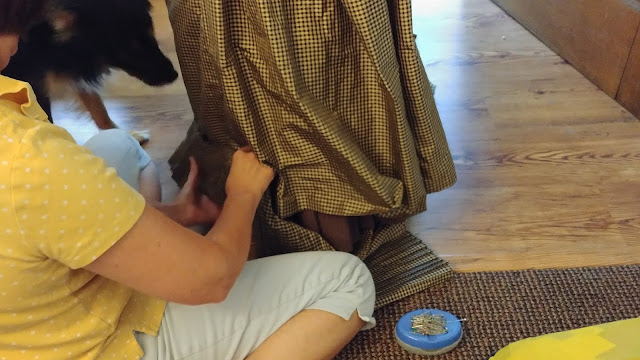 I attached the ruffle by simply top-stitching over my basting line, which blended in to the pattern well enough that I didn't feel the need to remove it.  I started at the back, sewing with the pleats folded towards me. 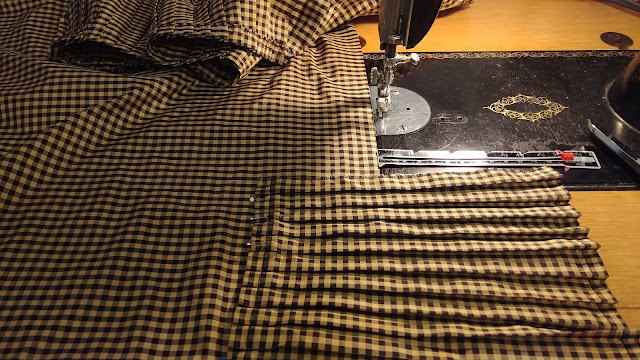 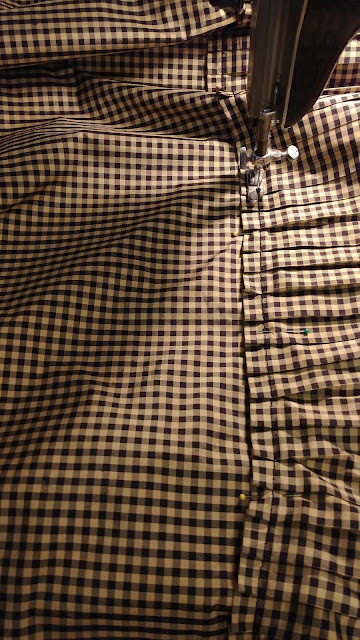 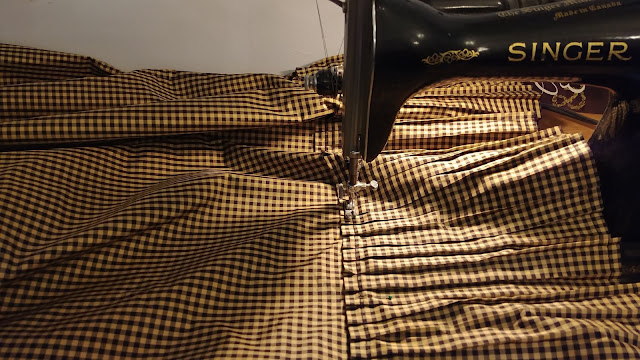 Once I had gotten all the way around to the back again, I had quite a bit of extra. I expected this, as I had purposely made more ruffle than I needed for circumference of the hem, and then I attached it several inches above the hem, where the circumference would be slightly smaller because of flared seams. 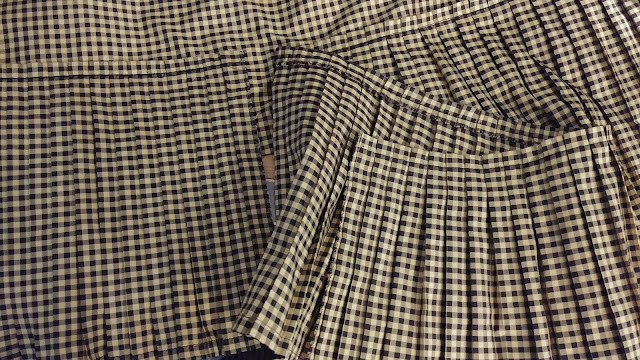 I found where the overlap would be, cut off the excess, joined the two edges together, and stitched it down like the rest. 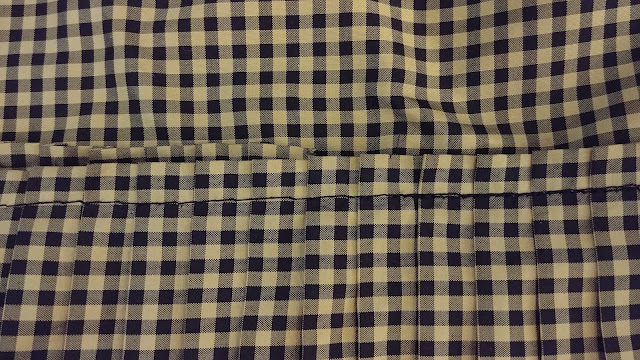 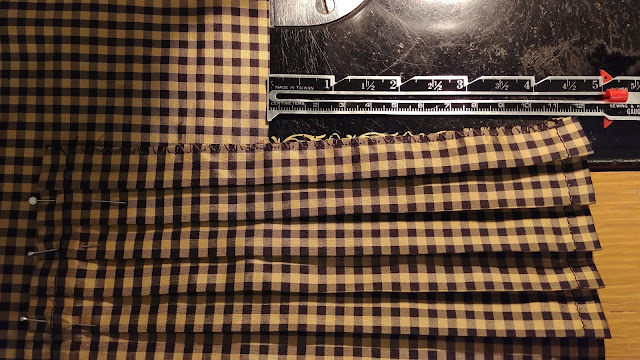 And just under 3" longer in the front. 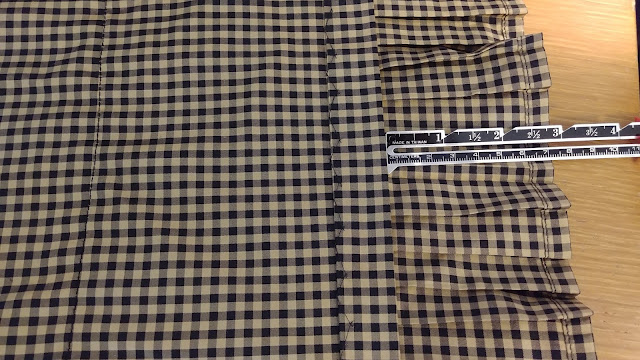 And if you made it to the end of this post, you deserve another sneak peak of the photo shoot!  The full post is coming next! 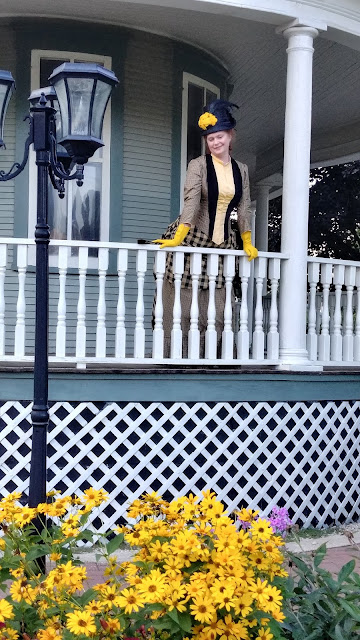 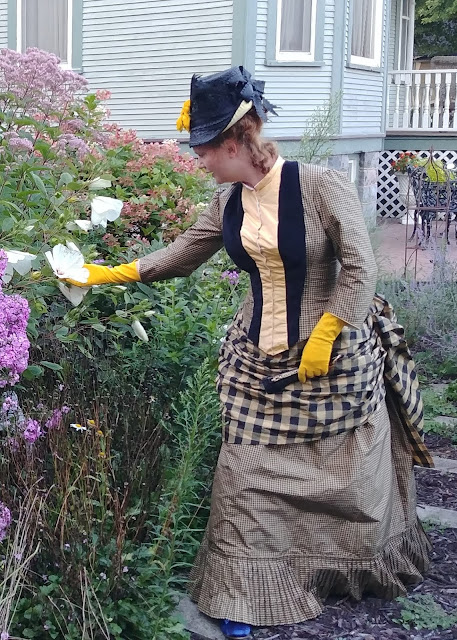 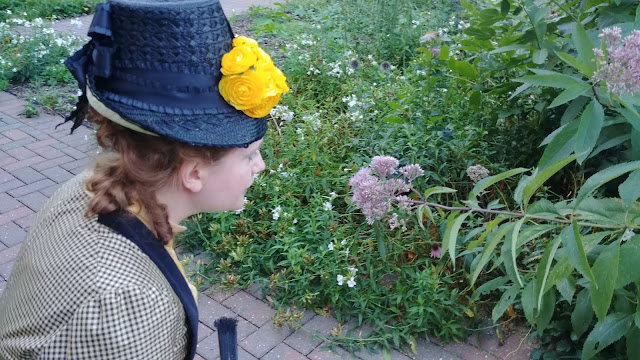