At the beginning of May, with limited time before my next 18th Century outing, I decided to finally finish this jacket and add some new accessories to it instead of trying to make a whole new ensemble from scratch.

When I first made it back in 2014, I ran out of time to add the ruffle at the neck before I wore it for the first time:

Then I never got around to it after the fact.  And I wore it again last April, this time adding a stomacher to accommodate my baby bump: 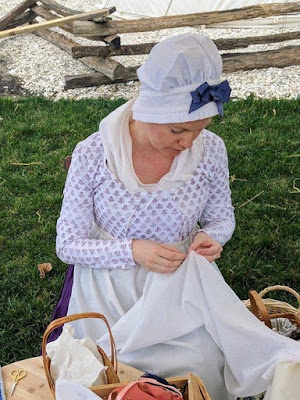 I was focused on making sure the ensemble fit, so I also made a very quick and dirty apron to cover the gaps at the sides of my petticoat.  So again, no time to add the ruffle.  But I had set aside a long strip of my block-printed fabric when I first cut out the jacket, because I wanted to recreate my inspiration piece as closely as possible:


I hemmed the ruffle by hand (though I'm not sure now why I didn't just pink it) and pleated it somewhat by eye to the neckline. 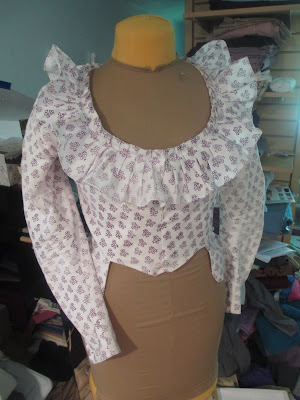 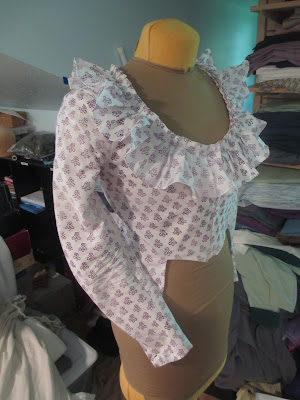 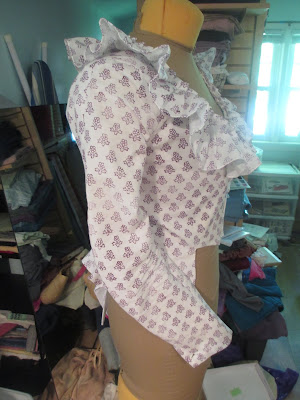 I did not have time to attach it by hand, however.  I just turned down the top edge about 1/4" and basted it on by machine: 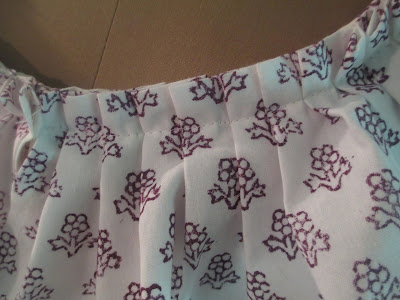 I can always unpick the basting later and hand-tack it down.  But I am so much happier with the jacket now, and I really enjoyed accessorizing it!

I had gotten this hat several years ago, and finally got around to decorating it properly: 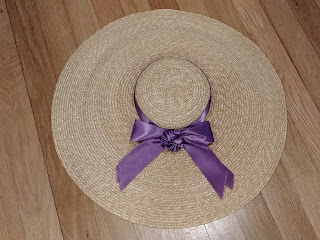 I started with sheer striped cotton leftover from my Sheer Striped Regency dress.  I had set aside a yard to make a kerchief for myself before dyeing what was left to make Reptar her own Regency dress someday.  That's not entirely relevant, but I like getting multiple uses out of my fabrics.  I cut a square from the un-dyed yard to use for the kerchief, and then I had a strip about a foot wide left over.  I cut this into several 4" wide strips: 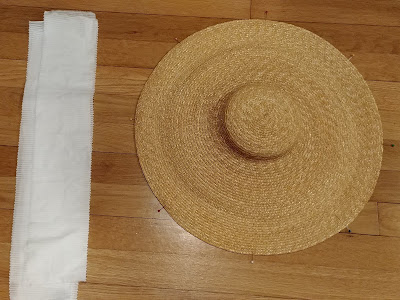 I marked out eight divisions on the brim, to give myself a guide for pleating.  I pinned the strips along the outer edge in approximately 1" box pleats, then smoothed the pleats in toward the crown as evenly as possible.  I was quite pleased with the results: 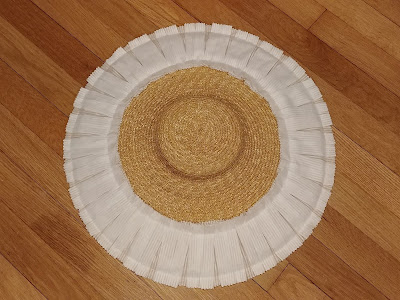 Then I played around with some purple velvet ribbons and one leftover strip of cotton to decorate the crown: 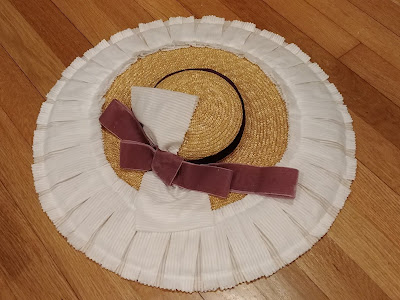 I managed to make a bow without cutting the ribbon!  I'll do a separate post about that, in case anyone is interested in how I did it. 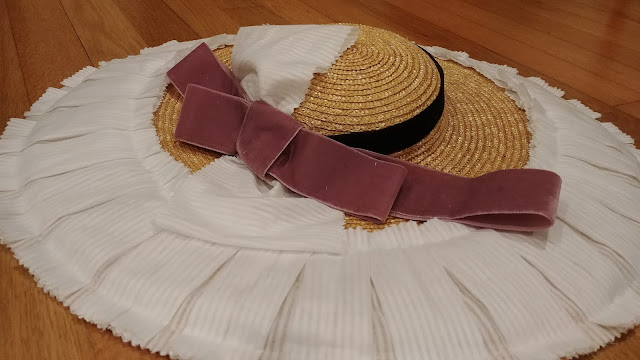 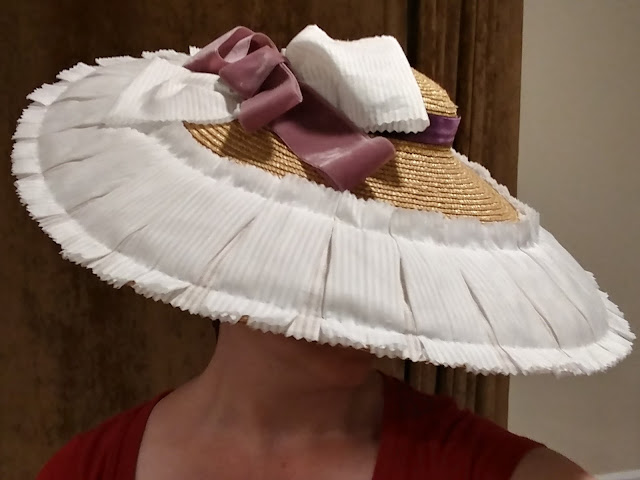 I had worn this kerchief before un-hemmed and just tucked into my neckline.  But is hemmed now:

I finished two sides of the triangle with a hand-rolled hem: 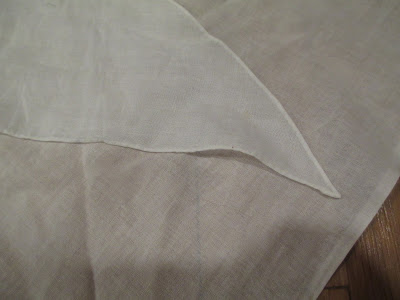 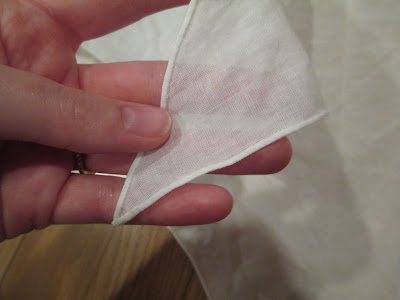 The third side was the selvedge of the fabric, which I left alone because there was no shrinking or stretching when I washed it. 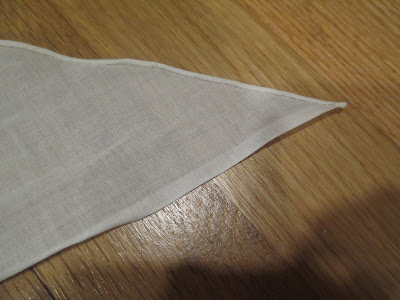 I made a new apron - I wanted a nicer one than the one I wore last April. 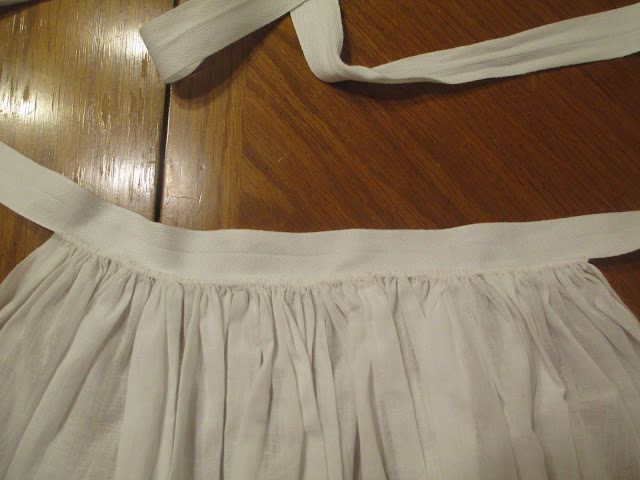 I also wanted to try the rolled whip gather technique: 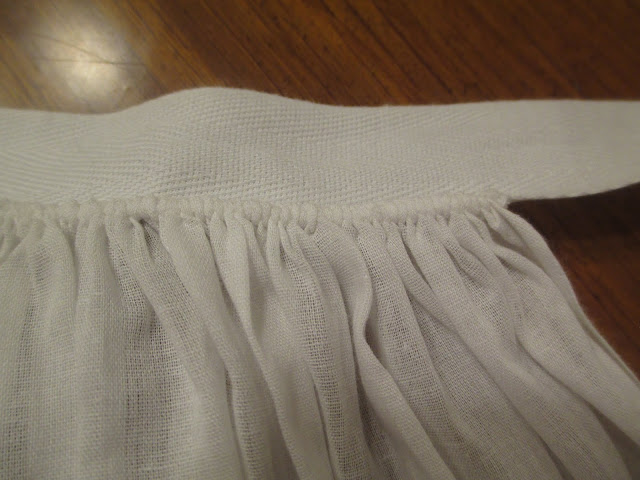 I used the same cotton voile as my kerchief, again leaving the selvedges alone and just hemming the lower edge: 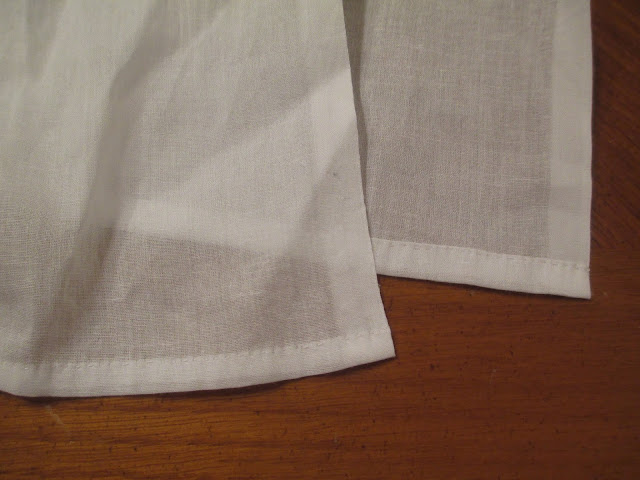 I also lightly starched the fabric before I made it.

I had never before attempted a "hedgehog" hairstyle, but how hard can it be?  I put my hair up in rag curls overnight, and started building the style by pinning large hair rats to the top of my head: 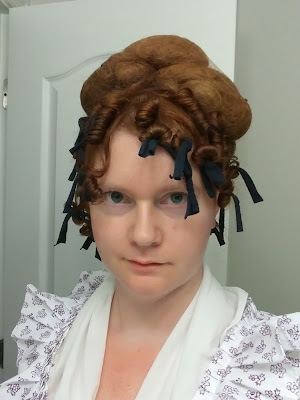 I then let down the curls, and combed them out one at a time to give them fluff and volume: 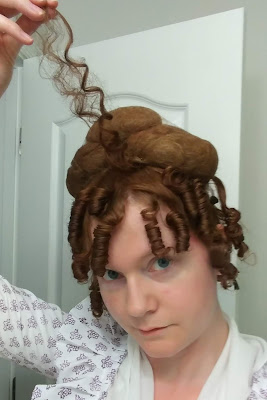 I didn't tease the hair, because I didn't want to make it too tangled, and I wanted to retain the curl as much as possible.  Then I basically just draped them over the rats: 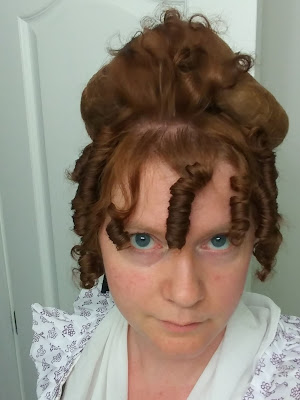 This part was fun. 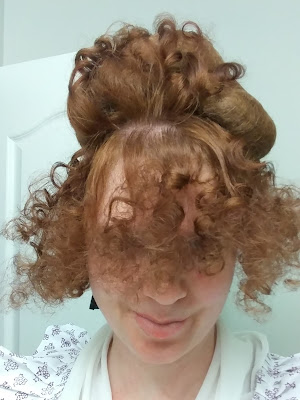 At the sides, I tried to keep as much volume as possible, to fill in where there were no hair rats to build on: 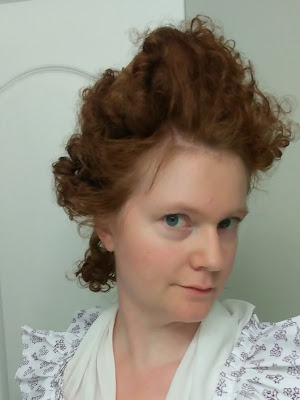 And I kept three or four curls hanging down at the nape of my neck: 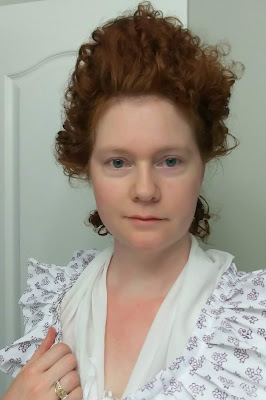 All in all, I was pretty happy with the look I accomplished: 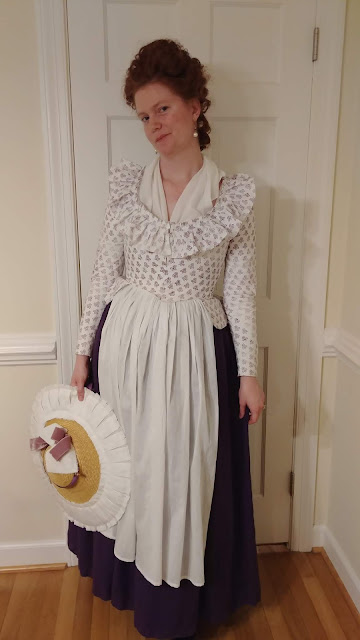 One really nice thing about the apron is that it hides the fact that the front of the jacket is just a bit too short and tends to show the waistband of my petticoat.  And without even trying, I had gathered the fabric to exactly the width of the space between the two sides of the peplum! 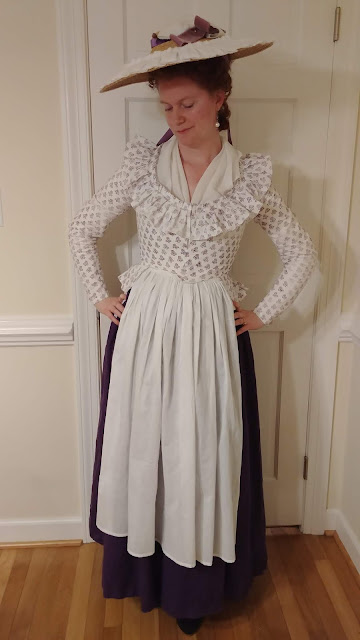 I think the ruffle really adds a lot to the look! 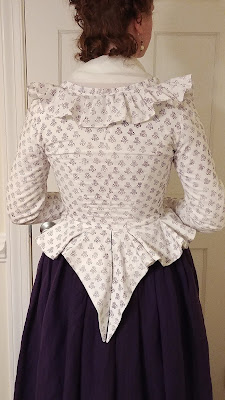 These photos were all taken after I'd gotten home from the event (and had taken off my bum pads to make driving easier).  Next post will be all of the photos taken in Williamsburg!
Posted by Chelsea at 8:35 AM