Well, I finished my jacket in time for the RSV picnic - which was cancelled.  :(  Which I didn't find out until I had already driven all the way there.  Grrrrrr.  Oh well, at least I didn't get all decked out first.

But!  Bright side!  The spencer is done, at least done enough that I could have worn it today.  It still needs fasteners, but I had planned to pin it in place for the picnic and it probably would have been fine.  I'm actually extremely happy with how it turned out, and I think it ended up being cuter than my original design! 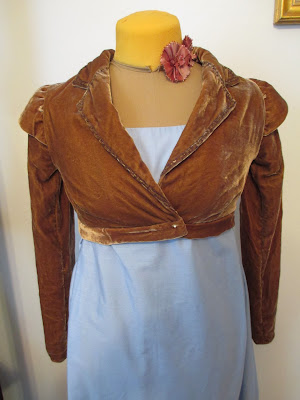 I decided last-minute to make the sleeves removable, which actually ended up solving a few problems for me.  Originally I had intended to add some of the extra fabric from the cut-off bottom portion to the top of the sleeves to give them a little puff at the top.  This turned out to be impractical and the effect when I pinned it in place (no pictures, sorry) was a disappointing, floppy flap at the shoulder and slouchy fabric down to the elbow.

I ended up removing the sleeves entirely since I needed to take in the armscye anyway, and once I did that I realized I also needed to take in the shoulder seams.  I used this opportunity to angle them down more towards the back in a slightly more period-accurate manner, and now the whole bodice fits much better.

I had toyed with the idea of making the sleeves removable, but I still wanted something at the shoulder.  There wasn't nearly enough fabric to make the traditional short puff sleeves, but I played around with the strange, rounded oblong shapes I had cut when I was thinking of adding to the top of the existing sleeves.  When I folded one in half on the diagonal, it formed a nice half moon that fit into the top of the armscye to create a little cap sleeve. 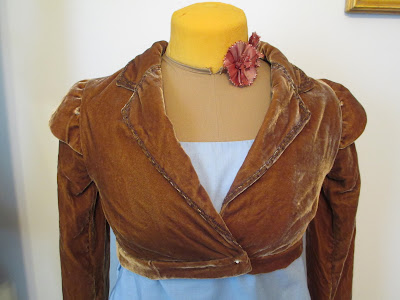 I inserted some thick interfacing that I had saved from inside the tie-back that came with my Lowe's curtain from last year into the caps to make them stand out from the shoulder.  For the bottom of the armscye I used bias tape as facing, hand-tacking it to the lining on the inside.

The original sleeves still need lining, but they are hemmed and would have been tacked in place for today. 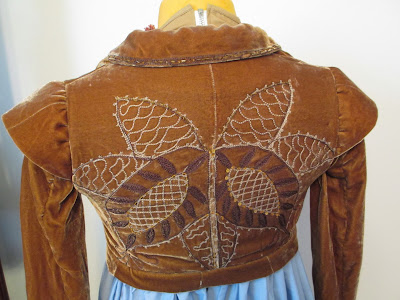 And they will be optional!  So I could wear the spencer as an evening bodice, if I so choose. 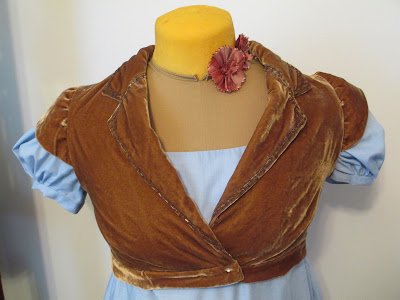 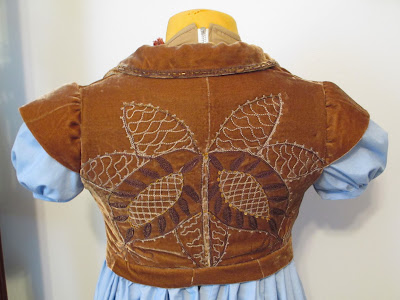 My remaining scraps of velvet are two pieces like this: 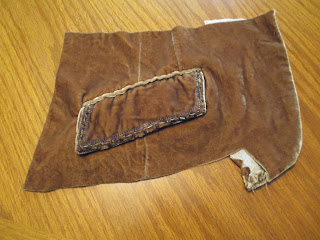 I should be able to do something with the pocket flaps, at least!  I've always believed in "using every part of the buffalo."  :p
Posted by Chelsea at 12:34 PM