I recently acquired a project gown from the Colonial Williamsburg Costume Design Center yard sale, which took place during the Under The Redcoat reenactment event over June 28-30.  I attended the event itself as well, though not in costume.  Maybe next year.

The gown I purchased is an open robe with matching stomacher and petticoat, featuring an en fourreau style back.  It is made of a very lovely striped silk* and as of now it is just a bit too small for me. 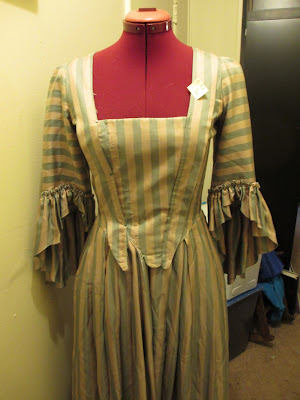 *I have not yet tested the fabric to be sure of its fiber content.
The gown has some other problems as well, mostly just areas of wear that will need to be worked around.  The major one is on the right side front of the overskirt, at the hip.  Clearly this gown was worn over pocket hoops, and they were not nice to it. 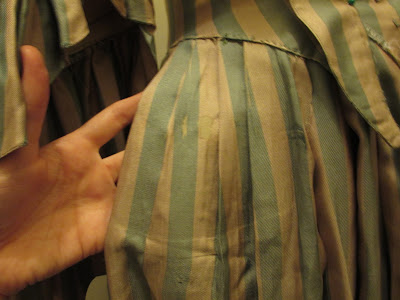 This has been patched from behind, somewhat oddly: 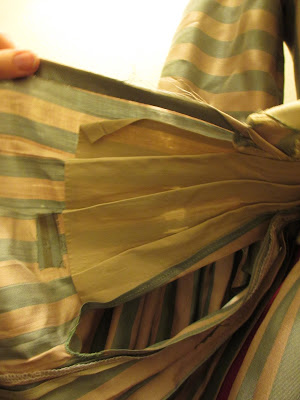 I plan to remove the entire front side panels and replace them with pieces of the petticoat.  I love the idea of a matching petticoat, but I'm willing to sacrifice it to make the rest of this gown work.  I'm also working on a sheer striped petticoat which I think will coordinate nicely with this gown worn a la polonaise. 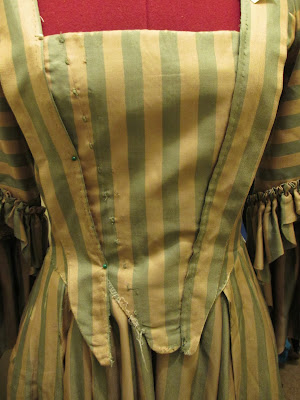 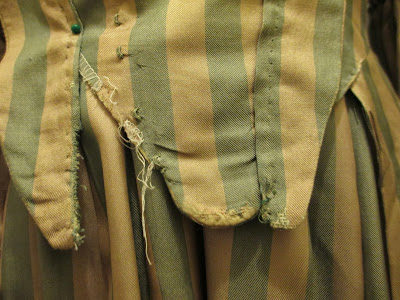 The stomacher had already been flipped once, so the back side is just as worn.  However, it is set into the left side of the gown a good inch-and-a-half more than it needs to be, and in fact I don't intend to sew it back on at all.  So that will help fix the fit issues.  The skirt of the gown is also shorter than I would like, so I will be letting down the hem as much as possible.  I can't make it any longer by adjusting it at the waist, unfortunately, because of the back treatment:

I LOVE the en fourreau back, though!  It's so elegant, especially in stripes.  All in all, I'm excited by the possibilities of this gown.  I always enjoy taking things apart and putting them back together.  :)  Stay tuned!
Posted by Chelsea at 9:03 AM