Well, boo.  I went to two different Meijers today, and neither had the gold embroidered clearance curtains I want.  :(  The first one did have the same style in three other colors, but they weren't on sale.

They also had several clearance curtains in a lovely jacquard that I thought might work for a someday Elizabethan gown, but I wasn't inspired enough to buy any. 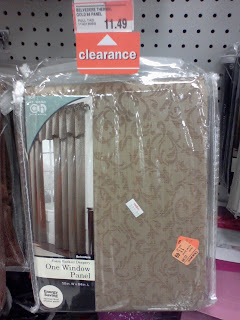 The second store had even less selection, but I did end up finding one of the 5-piece window sets that caught my eye the first time I went window shopping.  I absolutely love this deep red and gold plaid:

Now, my original calculations led me to believe that two of these sets would yield enough yardage to get a good Civil War era gown, because I was reading the description incorrectly.  I thought that each curtain panel was going to be 60x84", when in fact the attached valance is the only part that's 60" wide. 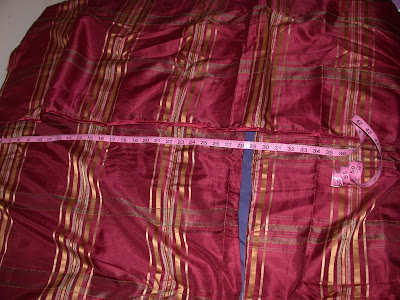 Each panel is only 28" wide, which means that I would need twice as many sets as I thought, and this Meijer only had one.  Boo.

They did have four sets of the same plaid in a pretty tan color, but that one didn't excite me as much.  And now I'm not sure what to do with this one.  It's not very 18th Century, otherwise I'd make a caraco jacket or something.  And the pattern is much too large to be suitable for a doll gown.

I think the moral of this story is that I need to stop buying curtains.  :p
Posted by Chelsea at 4:06 PM