When I was planning my ensemble for the Williamsburg Winter Stroll, I knew I wanted a new stomacher to give my Gold Galleon Gown a new look.  I've added trim to the gown every single time I've worn it, so it's been slightly different each time.  However, at last wearing I had added all of the trim that I had originally planned, and didn't really feel the need to pile more on.  So a new stomacher was the perfect way to go!  I've long held a love for interchangeable stomachers, and finally I was living out my dream of freshening up an "old" gown with a new look!

I tried out different colors of ribbon before settling on this lovely pale blue striped ribbon that I bought at the 2016 Francaise Dinner from Bulldog & Baum:

I'd had the ribbon for almost three years, so it was high time to do something with it!  And I thought it would be a nice contrast to the gold.

For the base of the stomacher, I took apart this gown bodice: 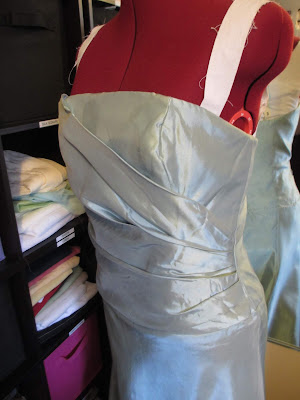 It was leftover from the petticoat I made to go with the Striped Silk Gown I wore to that same Francaise Dinner.  (The skirt was used to make the ruffle for that petticoat.)  I used the center back bodice pieces, which were already flat-lined with a nice interfacing: 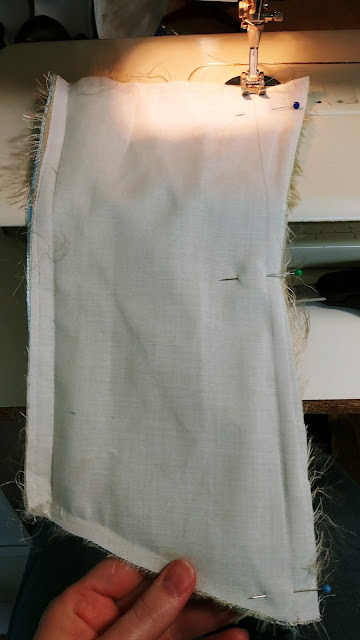 I just marked a straight line down the center back where the zipper had originally been, and stitched the two sides together.  This gave me a piece that was roughly the same size and shape as the original gown stomacher:

I used this piece for the back of the stomacher.  Since it was already interfaced, I just stitched my bone channels through the layers. 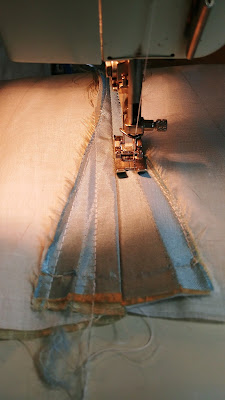 I then used the large front draped piece of the bodice (picked apart, washed, and pressed) to cut the front of the stomacher with no seams.  While I was working on that piece I played with the ribbon, pinning it on the back piece to decide on placement: 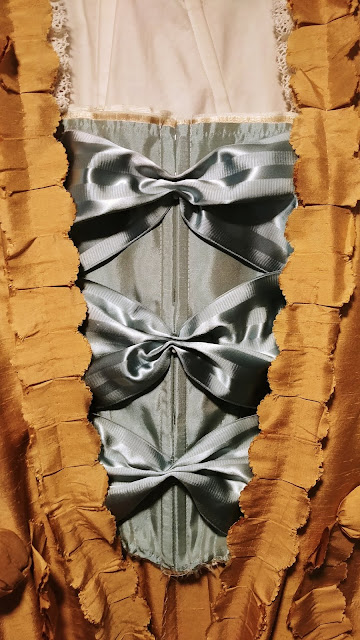 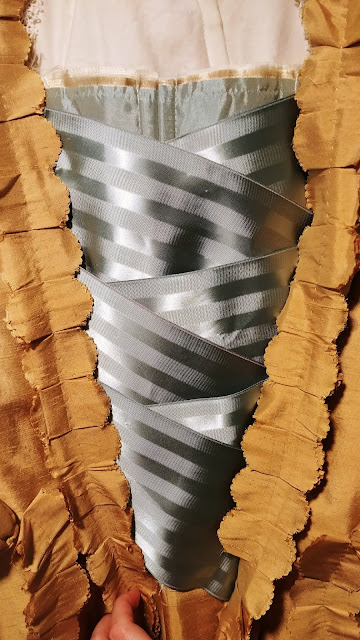 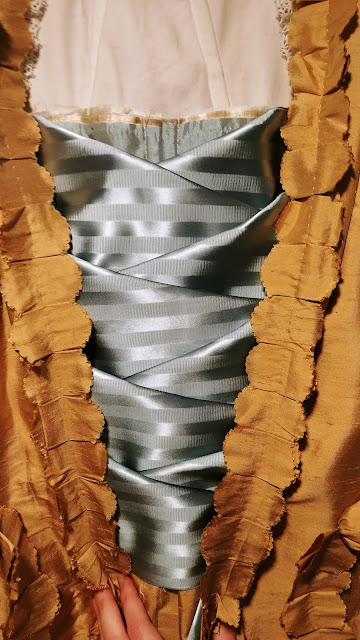 I posted these three options on Instagram, and the first one won by a large margin.  So that was settled!

The ribbon turned out to be extremely difficult to sew through, so I did as little stitching as possible.  I also made little faux bows for the sleeve flounces, and one for my cap.  They're just squares of ribbon, hemmed on the cut ends and gathered in the middle. 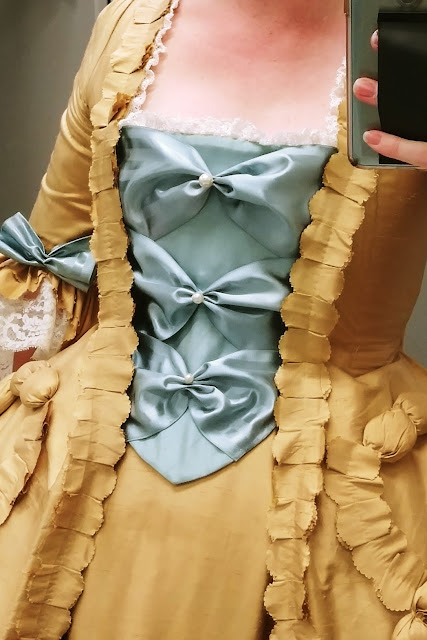 I added faux pearl beads to the center of each "bow" on the stomacher, just because I felt like it needed something to finish the decoration.

I also did one alteration to the gown itself, by replacing the original sleeve flounces.  They were fraying badly, even though the edges were pinked: 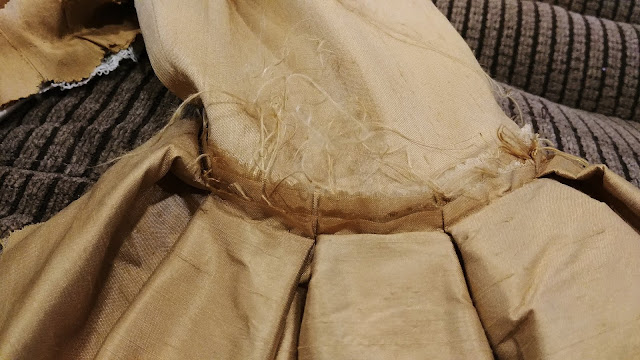 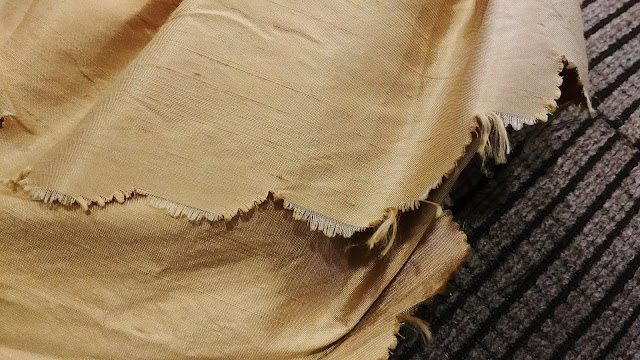 So it was clear I would need new sleeve flounces, because if I simply took them off and re-cut the frayed edges the same problem would happen again later.  But I was fine with replacing them, since I had never been fully happy with the large box-pleats I had used to attach them in the first place.

The new sleeve flounces were cut vertically with the same scalloped-scallops edge, and this time I gathered the top edges with large machine basting stitches through both layers, drew them up and stitched between the two rows of gathering stitches by hand. 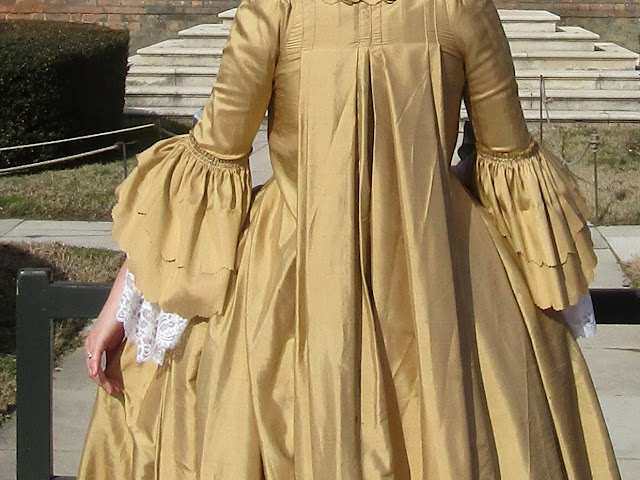 I like this gathered look a lot better than the original box pleats: 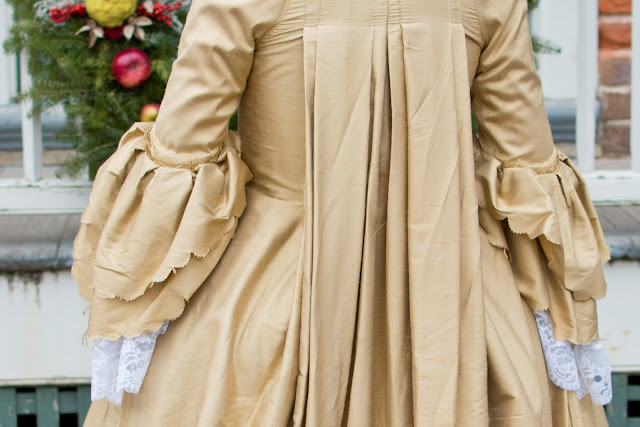 And here are some photos from the day!  I put on my shift and stays under "normal" clothes for the drive up to Williamsburg, to save time once I got there.  And I did my hair before I left, too.  It was a bit messy, but would be largely covered by the cap.   I took some ever-classy mirror selfies in the public restroom near the ice-skating rink while I was getting ready:

Those first three petticoats are all made from old sheets, and I wear them under pretty much every 18th Century ensemble
All done!  Time to go find the group.  (It wasn't hard.)

I got these photos taken for me, which show off my coordinating muff, as well: 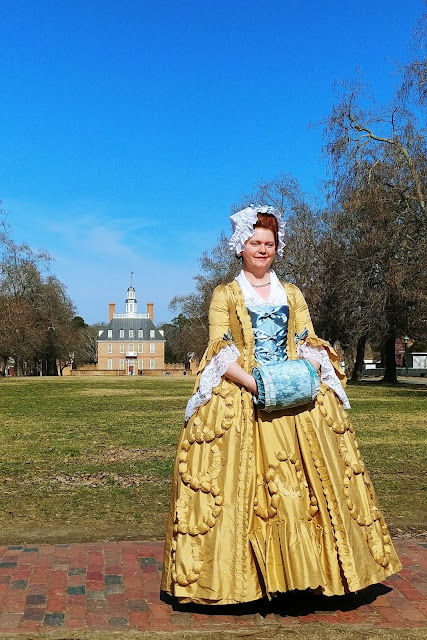 I really love how the blue pops against the gold in the sunlight!  I was worried about it looking too silvery. 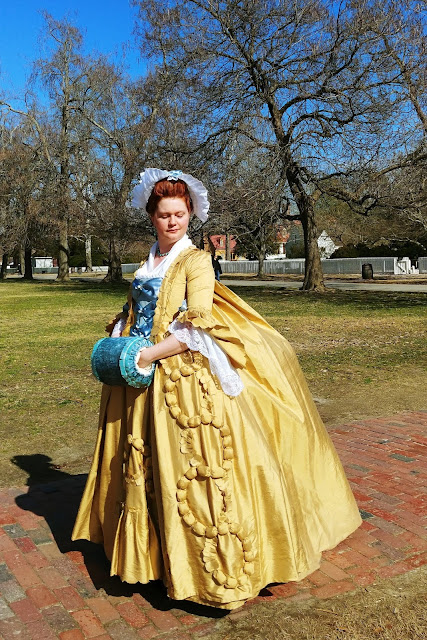 The wind really liked playing with the wings of my cap.  :p 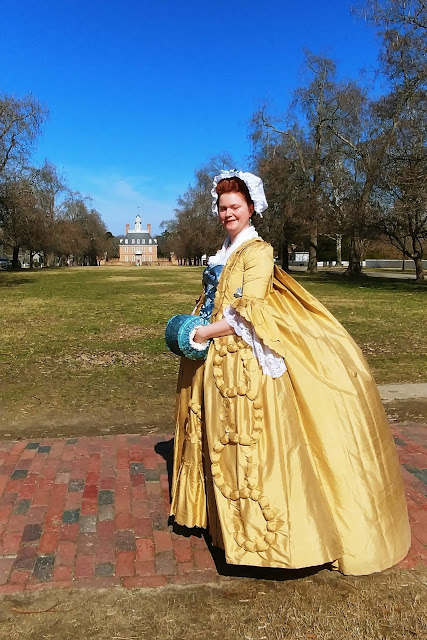 It was just barely chilly enough to need the muff - I had actually started out wearing my blue wool mitts, but soon discarded them because I was too warm.  But I was glad I got a chance to use this muff cover, which is the first one I ever made!  At the time I had nothing that coordinated with it, so I had never used it before now. 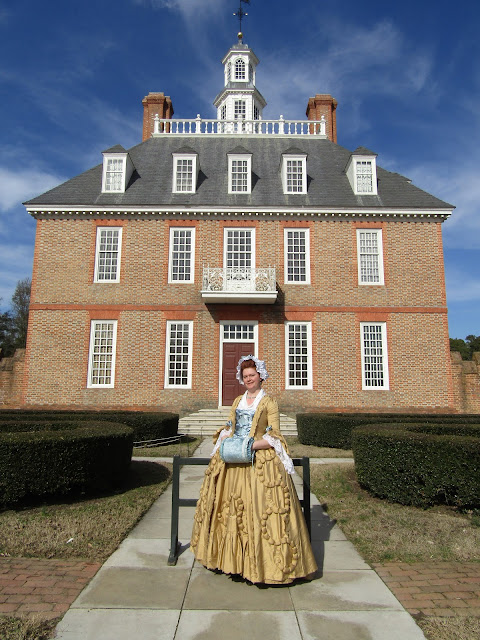 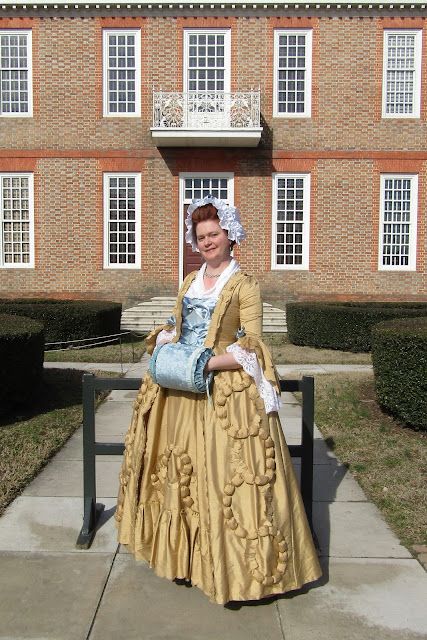 The muff was also a convenient spot to hide my phone, without having to dig through my pocket hoops every time I wanted it. 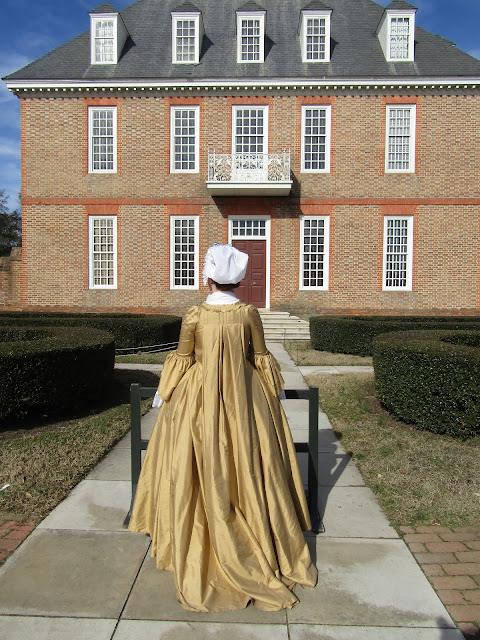 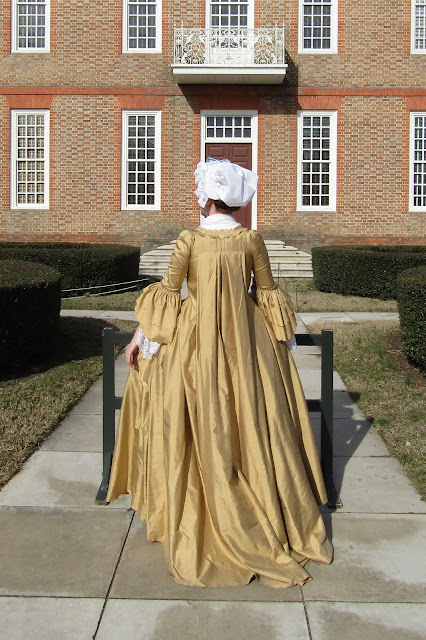 I had a lot of fun wearing this gown, as I always do.  And I've already identified the area that will need to be "fixed" before I wear it next: 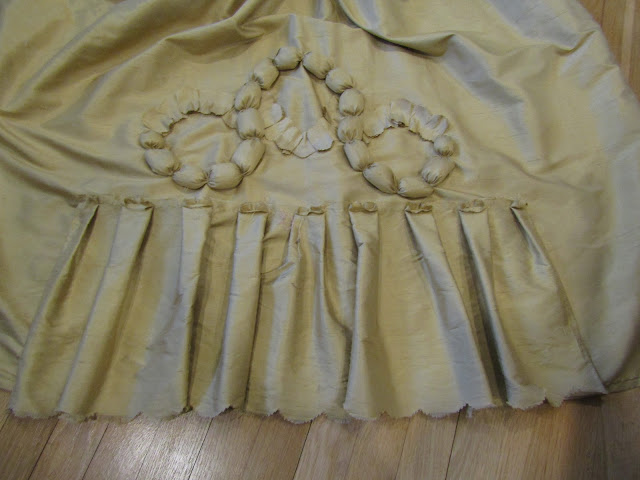 This ruffle was also cut horizontally across the grain!  So it will need to be replaced so it doesn't continue to fray: 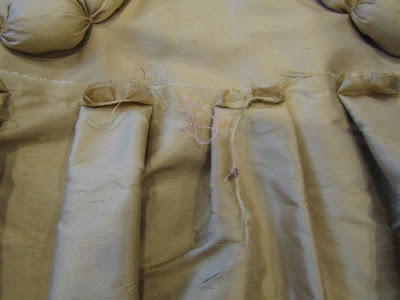 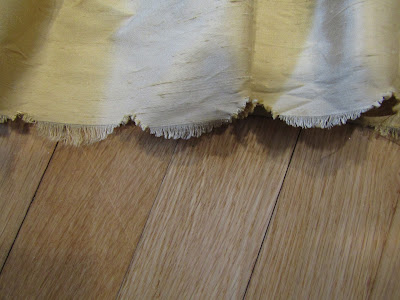 Fortunately, I still have quite a bit of this fabric left!  This francaise is the gown that never ends.  :p
Posted by Chelsea at 5:09 PM