The Hufflebustle - Trials and Tribulations

Two weeks ago I experienced an object lesson in why we make mockups.  I was working on the Hufflebustle, and it was time to start on the bodice.  The Truly Victorian patterns (I was using TV466) have a complicated system for choosing which size to cut, and you'll likely have a different size for your back pieces, your front pieces, and your sleeves.  This was all new to me, but I put on my corset and had Brian the Engineer take my measurements to determine the sizes I would need to use.  I came up with size G for the back pieces, size E for sleeves, and size C for the front.  It struck me as odd that the front and back would be so radically different, but I was willing to try it because the method was new to me so what do I know?

I used old bedsheets for my mockup fabric, choosing a pale green for the main bodice, dark green for the shawl collar and cuffs, and white for the center "vest" front and collar.  This would give me an idea of how my finished bodice would look with different colored fabrics I planned to use.  I knew I wanted to extend the shawl collar pieces all the way down the bodice front, and I was also planning on doing the shorter sleeve variation without the cuff.  But as long as I was making a mockup, I might as well make both variations so that I don't have to make another mockup later if I want to use the pattern as-is. 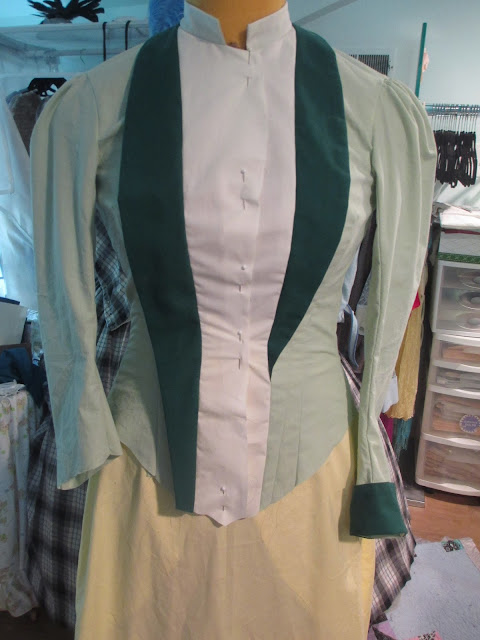 I left the design of the back as-is.  I was particularly excited about the fun pleated tails at the center back, though I did not realize at the time that I had tacked them the wrong way: 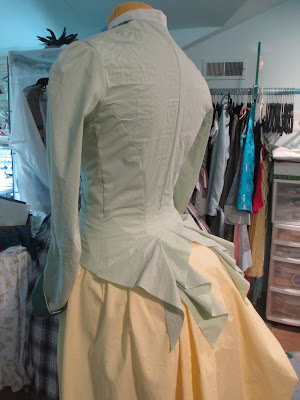 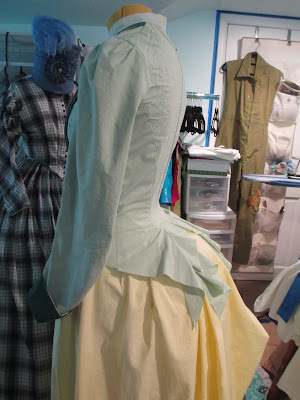 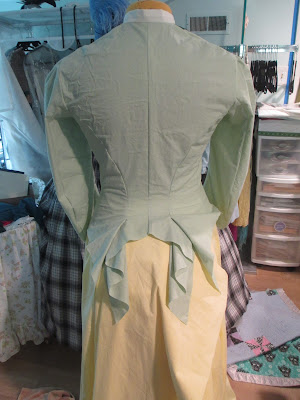 Now when I tried it on my dress form, I instantly knew something was wrong.  The mockup fit my dress form, Anna, almost perfectly.  The problem with that is that Anna is the same size I was when I was making my wedding gown over three years ago.  I have since gained weight, had a baby, gained more weight, lost most of that weight, and changed shape.

So it's no surprise that when I tried the mockup on myself, this happened: 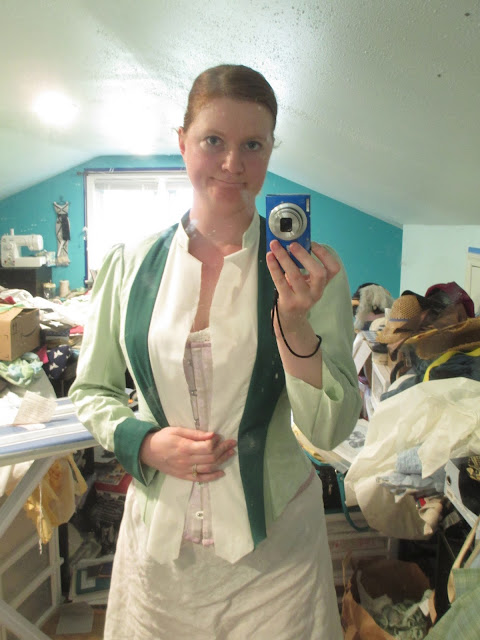 That's as close as I could get it to closing.  I quickly realized that the culprit was my corset: 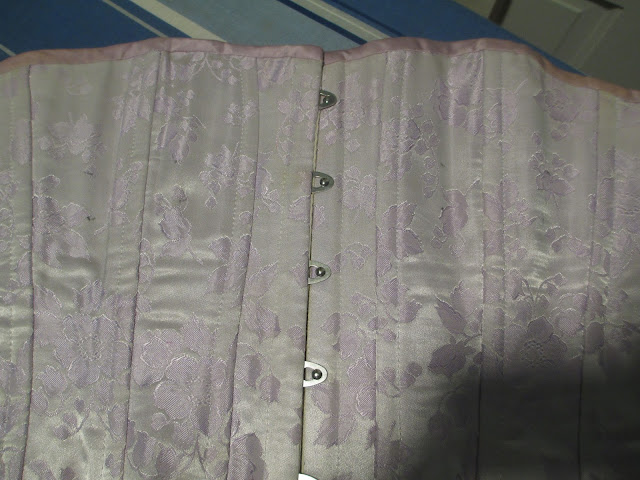 I had made it for my wedding, and it fit me then.  But I had altered the commercial pattern (I think it was one of the Simplicity mid-1800s ones) because it was too big in the bust, but I altered it poorly.  Now that I have much more bust than I've ever had before in my life - thank you pregnancy! - my corset was compressing my bust instead of allowing it to expand and lift.  I had already known I would need to correct this issue, but I was hoping to put it off until after the gown was made.  Well, clearly that would not do.

I dug up the scraps of brocade leftover from making the corset.  (See?  It's a good thing I hold onto everything!  I'm not a hoarder...) 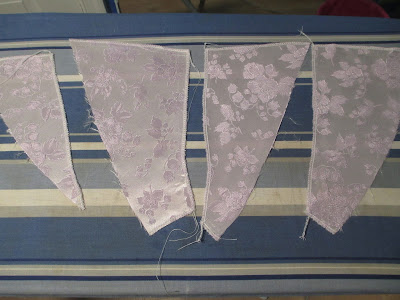 And I made bust gussets.  I tried it on and marked where I wanted the gussets to end, then took it off and drew a line down to those marks - after removing the top binding: 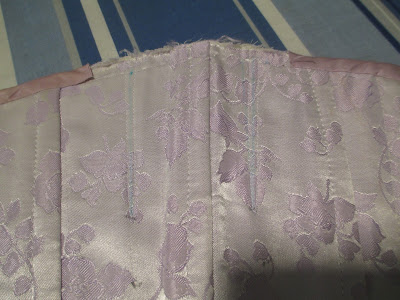 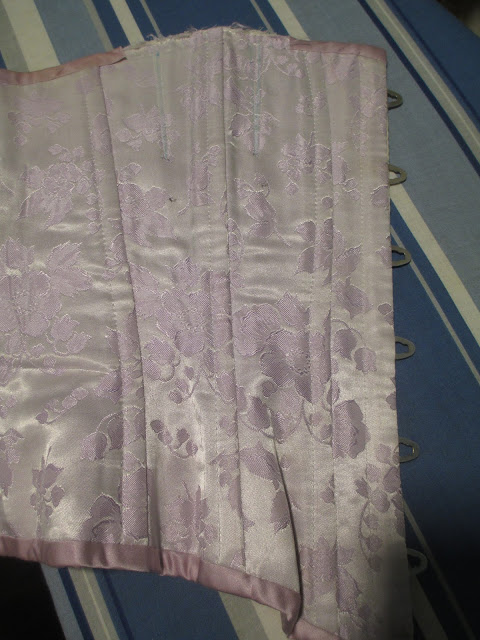 I stitched with a short stitch length on the machine, down alongside the lines I had drawn, meeting the point at the bottom, and back up along the other side, then cut down the line to the point. 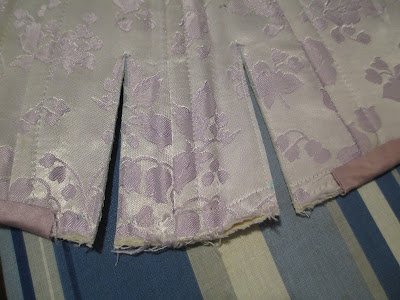 Then I sewed the gussets in.  I was using the method from my Laughing Moon Regency stays, though I wasn't nearly as careful to do a neat and tidy job.  I plan to replace this corset, so I'm not too concerned about making it look pretty at this point.

I did one side, then tried it on to gauge the difference.  It's pretty striking: 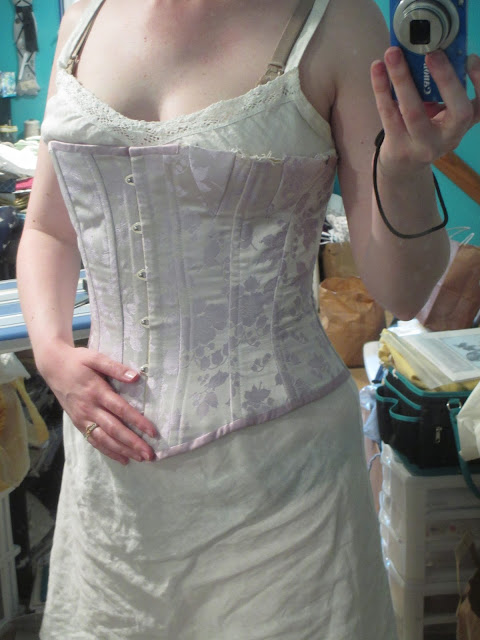 I meant to re-apply the satin binding at the top, and probably add some sort of drawstring to bring in the excess at the edge, but I really had to focus on the gown now, with the event only days away!  I quickly fixed the other side of the corset, tried it on again, and re-measured myself.  This time I got size F for the front pieces, which made WAAAAAY more sense!  I traced out the pieces in the new size, cut new front pieces of my pale green sheet fabric, took apart the mockup, and put the new front pieces on.  This time I didn't bother with making both shawl collar variations, and cut only my modified version from the same pale green.  I didn't need to check the design again, just the fit.  And I'm happy to say that my corset fitting issues were fixed!  The bodice fit beautifully, and I needed to make no further adjustments.  I left the sleeves off because they had fit fine in the first version, so I trusted that they would fit fine in the final version. 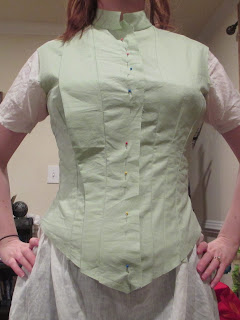 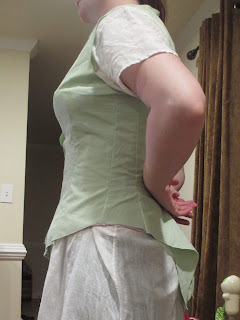 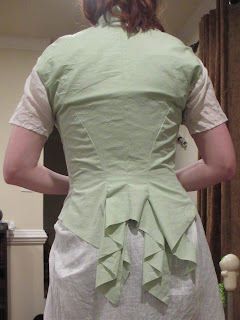 I fixed one side of the back pleated tails, but left the other tacked incorrectly, to remind myself of the difference so I would do it right on the final gown.

I am super glad I made a mockup (and a half) because I only had five yards of the micro-check silk, and I wanted to get both an underskirt and bodice out of it.  And because I only had to cut the real bodice once, I was able to!
Posted by Chelsea at 8:21 PM