For my first 1940s style summer sewing project, I chose this flowy rayon fabric in navy blue with dancing stars that I found on the bargain table at JoAnn's.  It was too cute to pass up, and of course there was only a yard and a half left on the bolt.  45" wide.  I hunted through my patterns to find one that would use such a small amount of fabric, and - not surprisingly - didn't find one.  But I settled on this adorable halter style, and ended up squeaking it out by shortening the hem about four inches. 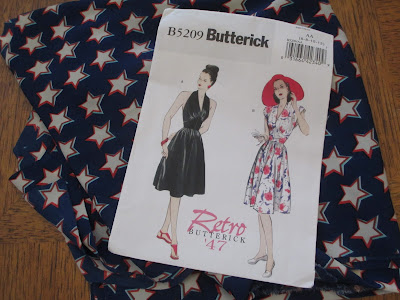 I had originally planned to supplement my limited yardage with some solid red polyester lining fabric I had, and my thought was to use the red for the midriff pieces: 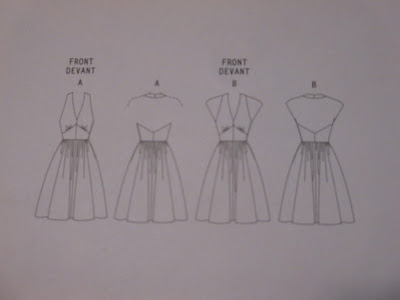 I'm sure this would have worked fine, but as it turns out I was able to get all of the pattern pieces cut out from the starry fabric!  I liked this much better, as now I wouldn't have to worry about the side zipper being obvious as the seam changed from navy to red and back to navy again.

The front and back skirt use the same pattern piece, cut four times.  Therefore I could not lay all the pieces out and cut them at the same time, which I always try to do.  So first I laid out the halter piece and the skirt front (placing it on the fold to eliminate the center front seam - just a design choice) and measuring how much total length the skirt piece took up. 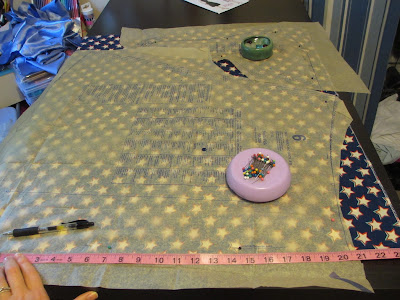 I only had 48", so I divided that by two to get the length of the skirt I would be able to cut from each end: 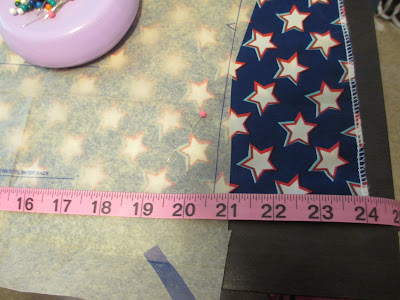 I then marked that length of skirt and measured up from the bottom that same amount all the way around to make it even. 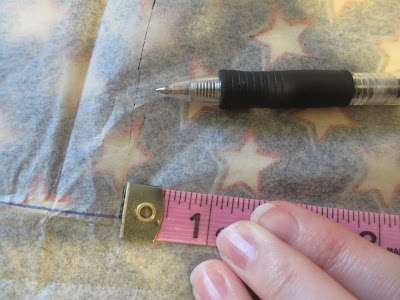 Then after I cut out those two pieces, I flipped the skirt pattern piece around and laid it on the far corner of the remaining yardage.  I cut it out following the same hem line, and ended up with a skirt skimming just above knee-length.  I was able to get the remaining pattern pieces cut from the small scrap that was left, even keeping everything on-grain!  I was quite thrilled.

Now the fitting part.  This was a little tricky because of the side zipper, but fortunately I had my mom to help me.  (This is why we make a muslin first, folks!  Must remember that, even in my modern sewing.)  I had needed to add to the seam allowances of the bodice pieces as I was cutting everything out, because my pattern envelope only went up to size 12, and I am currently at a size 14.  Grrrr.  Then when I tried my half-finished bodice on, I found it much too big in the bust and slightly too small still in the waist.  Grrrrr grrrrrr grrrrrrrrrrrrr.

I made the necessary adjustments, and when I was still having issues with the underarm portion of the bodice gapping away from me, Mom suggested I make a channel on the inside of the lining and add some narrow elastic to bring in the extra ease.  This worked beautifully.  I actually used the seam allowance as my channel, understitching it to the lining in the same step!

I also shortened the halter straps at the neck by about an inch, and used an invisible zipper in the side seam because that's the only kind of zipper that doesn't make me want to rip my hair out while sewing it. 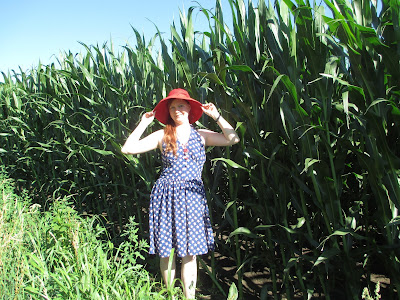 Finally it was done!  I wore the dress - accessorized with a fabulous red hat and adorable 1940s-inspired shoes - to my hometown's annual July Jubilee celebration last Saturday.  My dad was kind enough to take these photos of me after we got back to my parents' house out in the country. 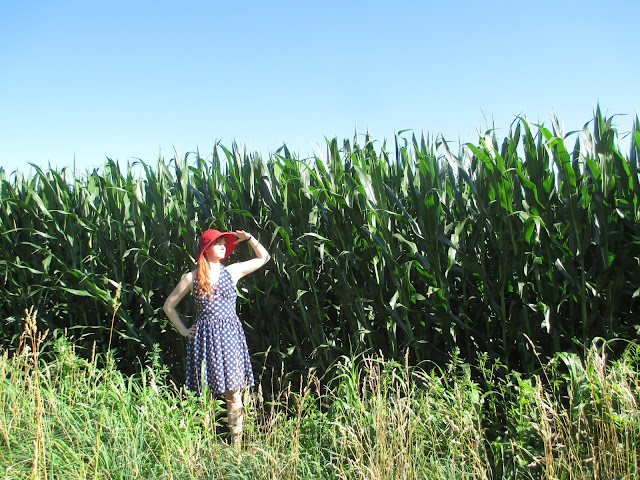 I wish now that I had taken some photos of the parade and town events, but I was too busy catching parade candy and re-living my childhood to bother with trying to record any of it. 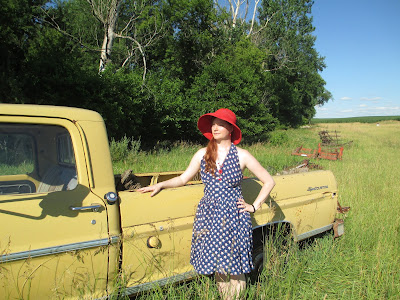 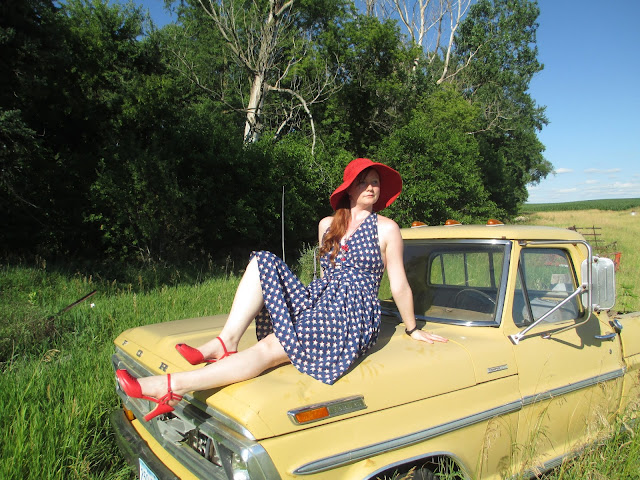 July Jubilee is always the weekend after the Fourth of July, and it tends to be the weekend that people who have moved away come back for.  Usually for class reunions and such.  There is always a parade on Saturday, and a big community picnic in the park afterwards.  My parents had company that day, so we didn't do as much of the town events as we might otherwise have done. 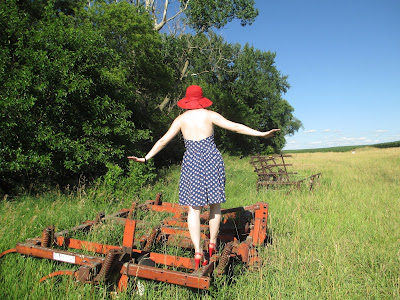 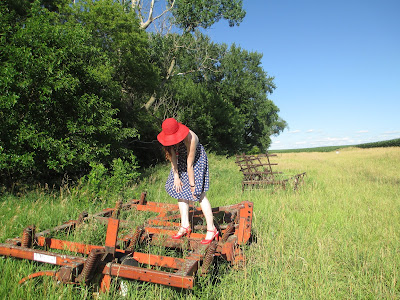 We did tour the 1901 Victorian House Museum, which I will talk about in detail in another post.  Stay tuned. 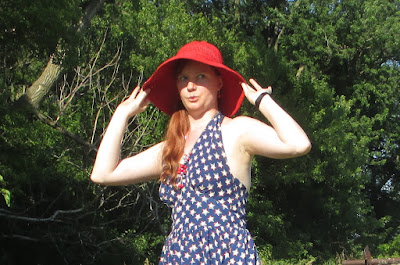 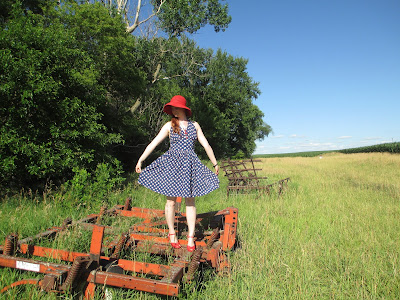 I had so much fun wearing this dress!  I felt very patriotic, and it's really quite comfortable.  I want to make several more in different colors, now.  I also love that it's sort of casually glamorous.  It's easy to dress up or down.  Walking around the town in my hat and heels, I felt like a movie star. 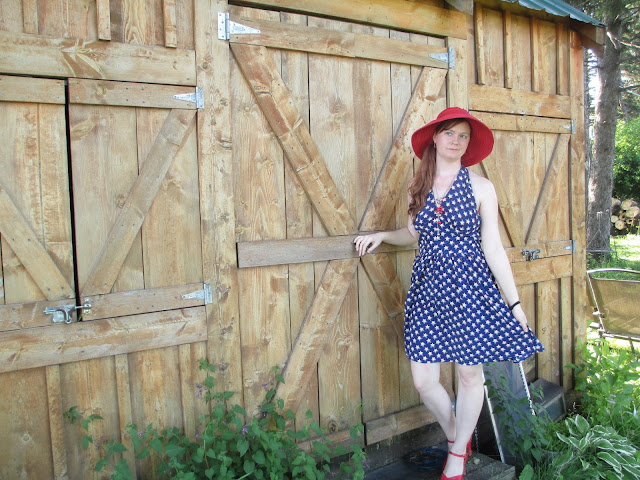 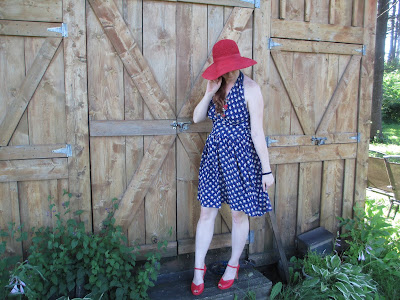 I seriously love these shoes.  Can you tell? 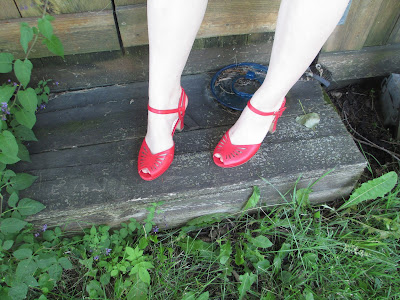 If you want your own, they are the Loraine 1940s sandals by B.A.I.T. Footwear, and I got them from Royal Vintage Shoes.
Posted by Chelsea at 9:30 AM