I actually made this dress back in February, but hadn't gotten any pictures of me wearing it before last week.  I had this yard of dark blue floral chiffon in my stash for years, waiting for the right project.  I originally thought I would make a skirt out of it, but I never found the right pattern. 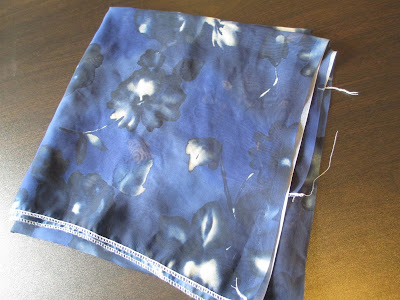 Then I bought this pattern during one of JoAnn Fabric's Simplicity pattern sales: 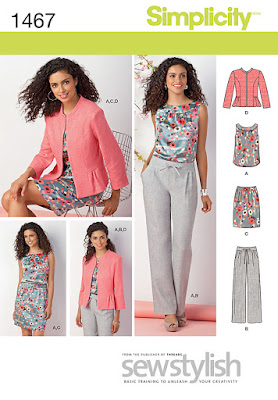 And I thought the fabric would make a very cute tunic dress, based loosely on the sleeveless top.  The fabric is quite sheer: 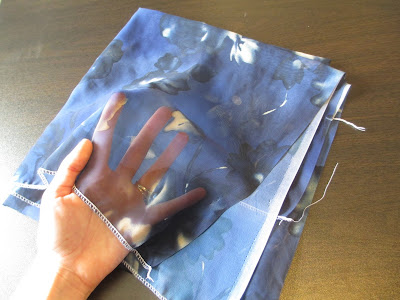 So clearly I would need to wear it over something.  I'll come back to that.

With my very limited fabric, I needed to be conservative in my cutting.  Also, chiffon can be a bear to sew, so I resolved to do as little as possible.  With that in mind, I combined the four main pattern pieces needed to make the top: 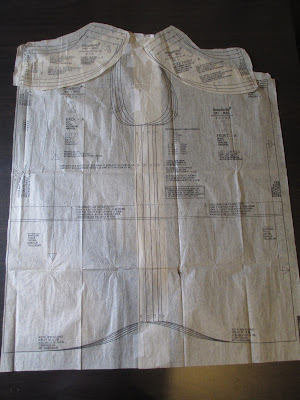 I very carefully taped them together, keeping the tape outside of the cutting lines so that I wouldn't compromise the integrity of the pattern pieces when I took them apart later. 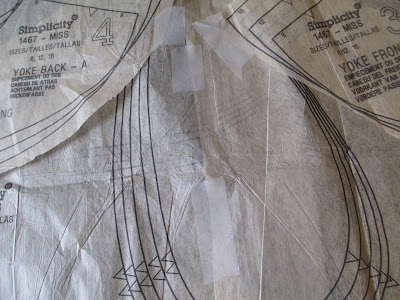 Then I taped them to the window of my front door: 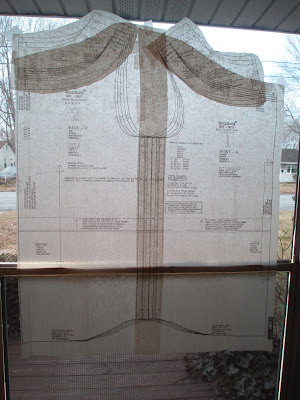 (This was back when my light box cord was still missing.  I have since replaced it.)  You can see that I overlapped the front and back pieces at the side seams so that the lines for size 12 were right on top of each other.  I am a size 14, so this eliminated the seam allowances but left a fair amount of wearing ease.  I taped newsprint to the window over my pattern: 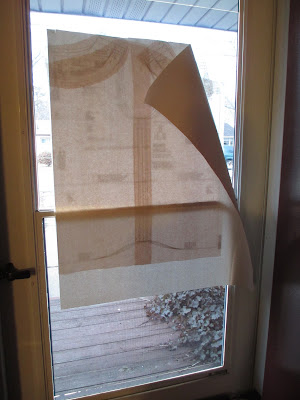 And traced it as one.  I had overlapped the yoke pieces with the front and back to again eliminate the seam allowances, so I just extended the neck line of the front yoke to meet the center front line of the main body of the pattern: 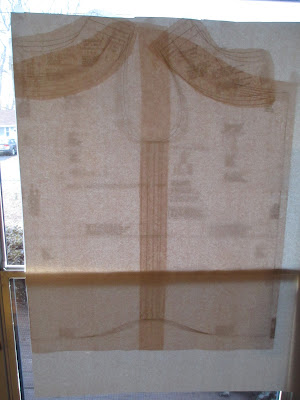 Then I used my new pattern to cut out the tunic dress in one piece: 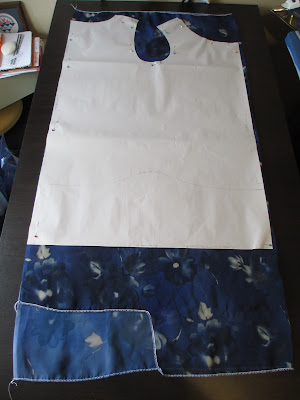 I had marked the original hem line of the top, in case I want to use it to make a top someday. 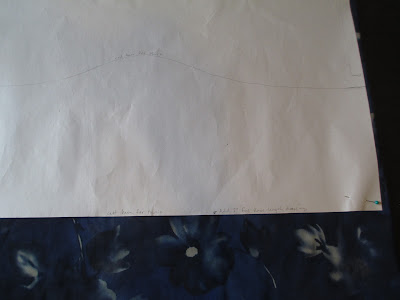 I also measured down from the bottom edge of my paper to a thread I had pulled to find the straight of grain across the width of my fabric: 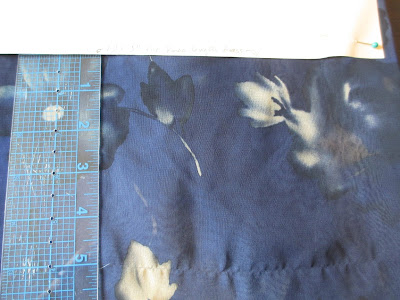 And then I cut on that line to make the tunic dress as long as possible.  I used the extra strip at the bottom to cut bias pieces: 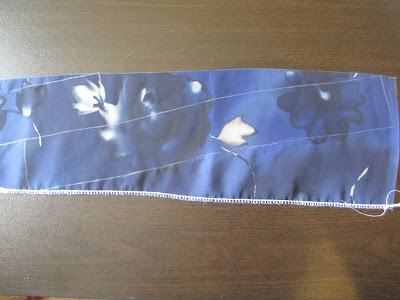 At least, close to bias: 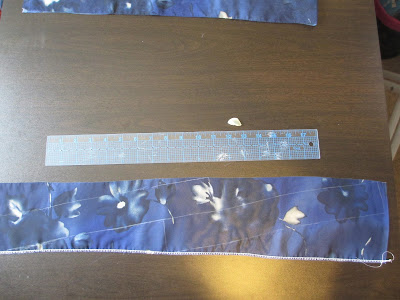 And I used these to bind the arm and neck holes, pleating the fabric in at the neck to roughly match the original pattern's look.  The only seams in the dress are the center back seam (which I cut on the selvedge so I didn't have to finish the edges) and the shoulders, which I sewed with French seams.  I used seam tape at the hem, keeping it sheer yet sturdy.

And here's the dress: 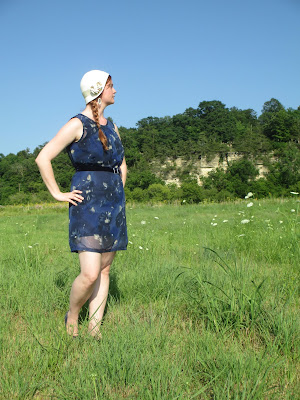 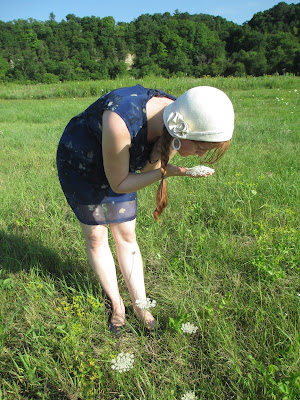 My sister Elise was kind enough to take these pictures for me while I was visiting her last week.  And bonus - I also wore my new Ivory Hat! 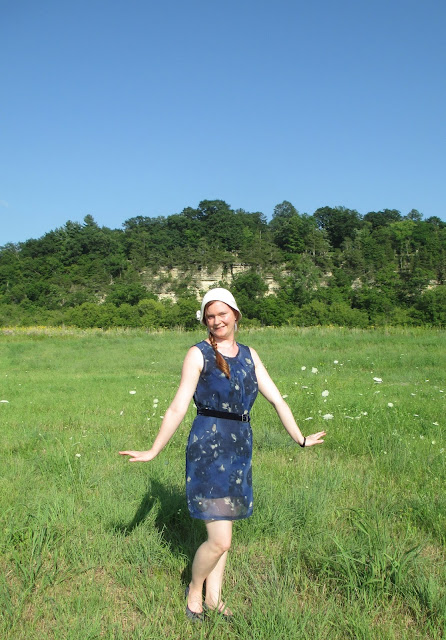 The back neck buttons with a large navy blue button and a fabric loop. 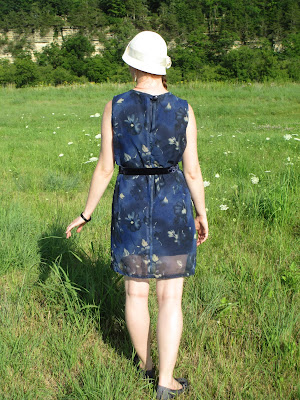 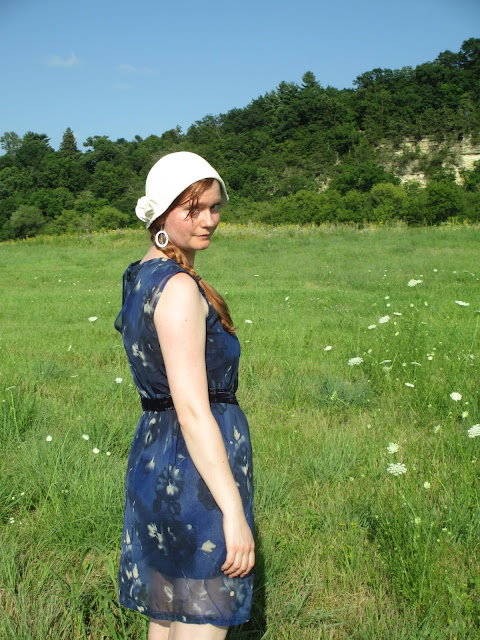 You can see that I wore it over a navy blue sheath dress, which I made entirely out of lining fabric.  It's only one layer, since I only ever intend to wear it under other things.  I already have another dress that I wear it with - a sweater dress made from a very open-weave knit.  I'll blog about that one another time, when I have pictures of me wearing it.
Posted by Chelsea at 8:55 AM