My No New Fabric challenge ended up being much easier than I had anticipated, and way more productive!  I finished a total of 18 items, and started 3 more. 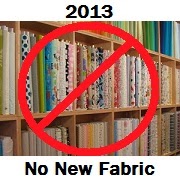 My costuming goals shifted focus over the course of the year - in January of 2013 I had planned an extensive 18th Century wardrobe which has only partially materialized.  However, attending a Regency ball last March expanded my historical fashion interests, and joining the Regency Society of Virginia has given me numerous opportunities to wear my new early 19th Century costumes - and reasons to make more!
I did make several of my planned items, though.  Let's start with those:

See?  I was already thinking about the Year of Foundations a full twelve months ago!  I didn't make foundations a priority, though, which is why I accomplished very little in that area.  My goals were to complete the following:
I completed: 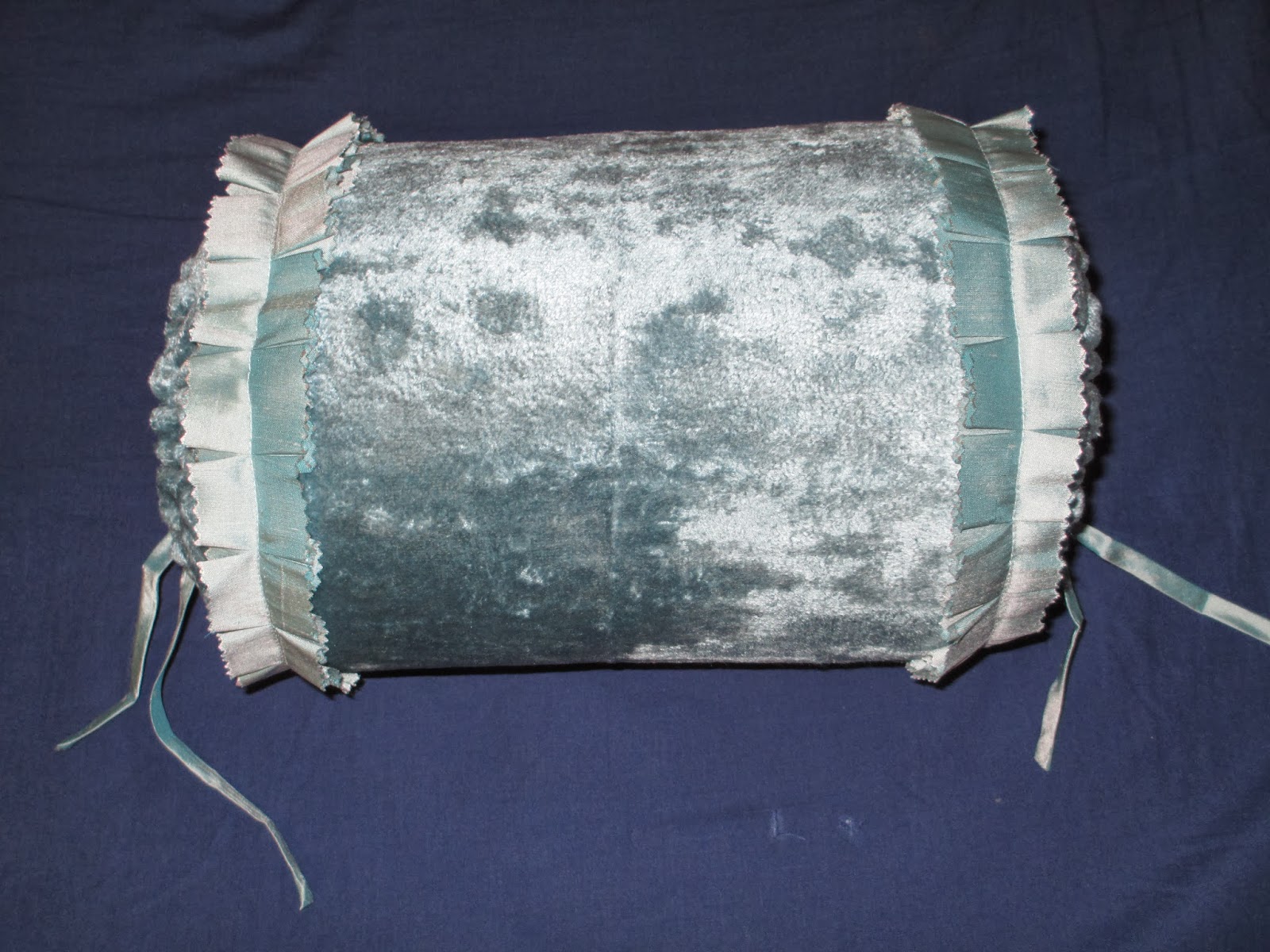 This was a UFO at the beginning of the year, and I still want to add trim to it.  But it's wearable, so it's done! 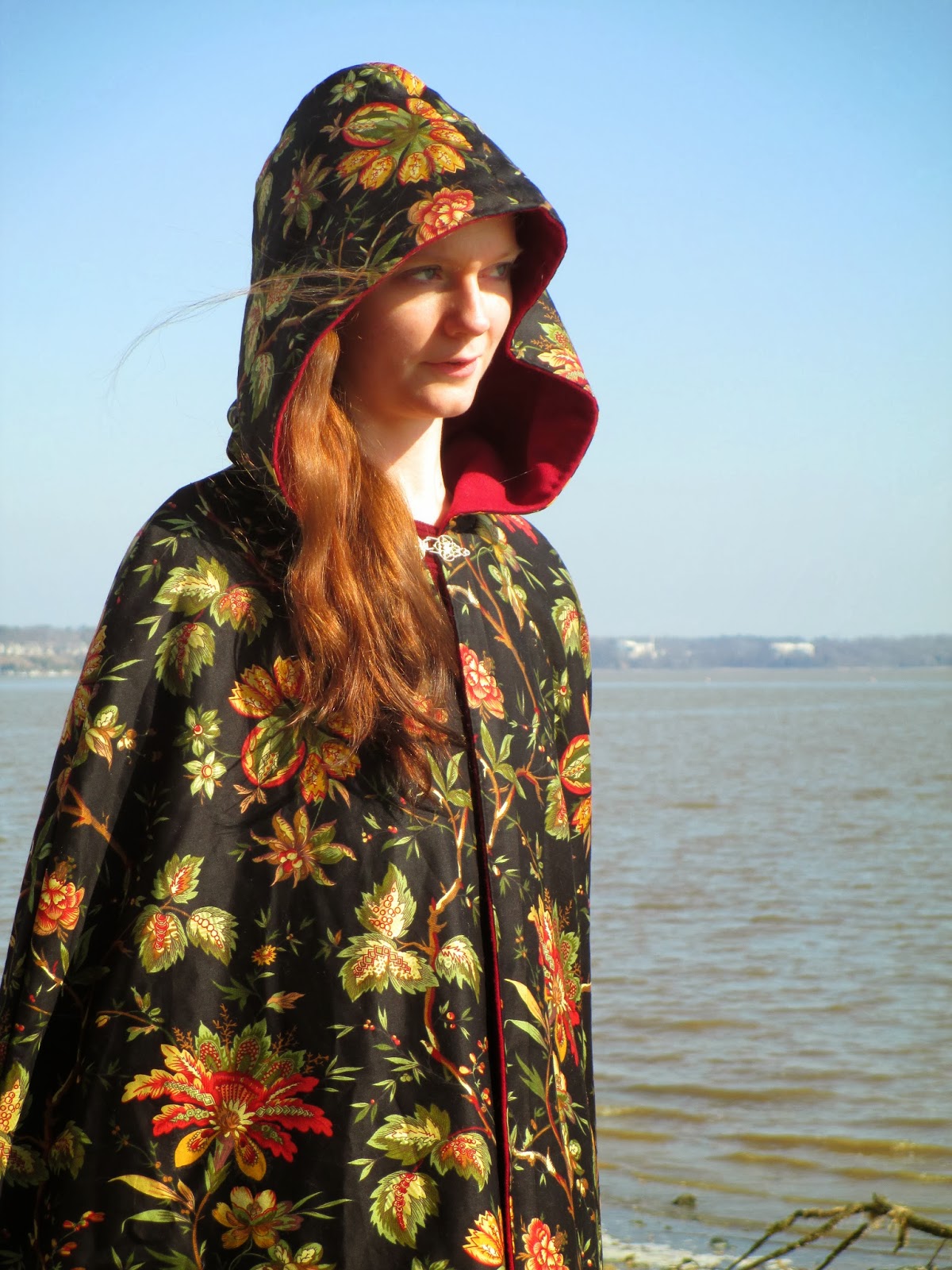 I had planned to make several of these out of various fabrics/curtains in my stash, and I completed...

I had planned a recreation of this American Girl Felicity doll dress: 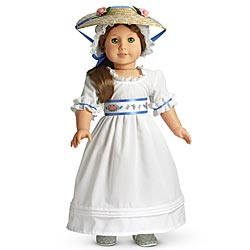 Then the Historical Sew Fortnightly happened, and my plans shifted to an 1813-era silhouette, coming up with this: 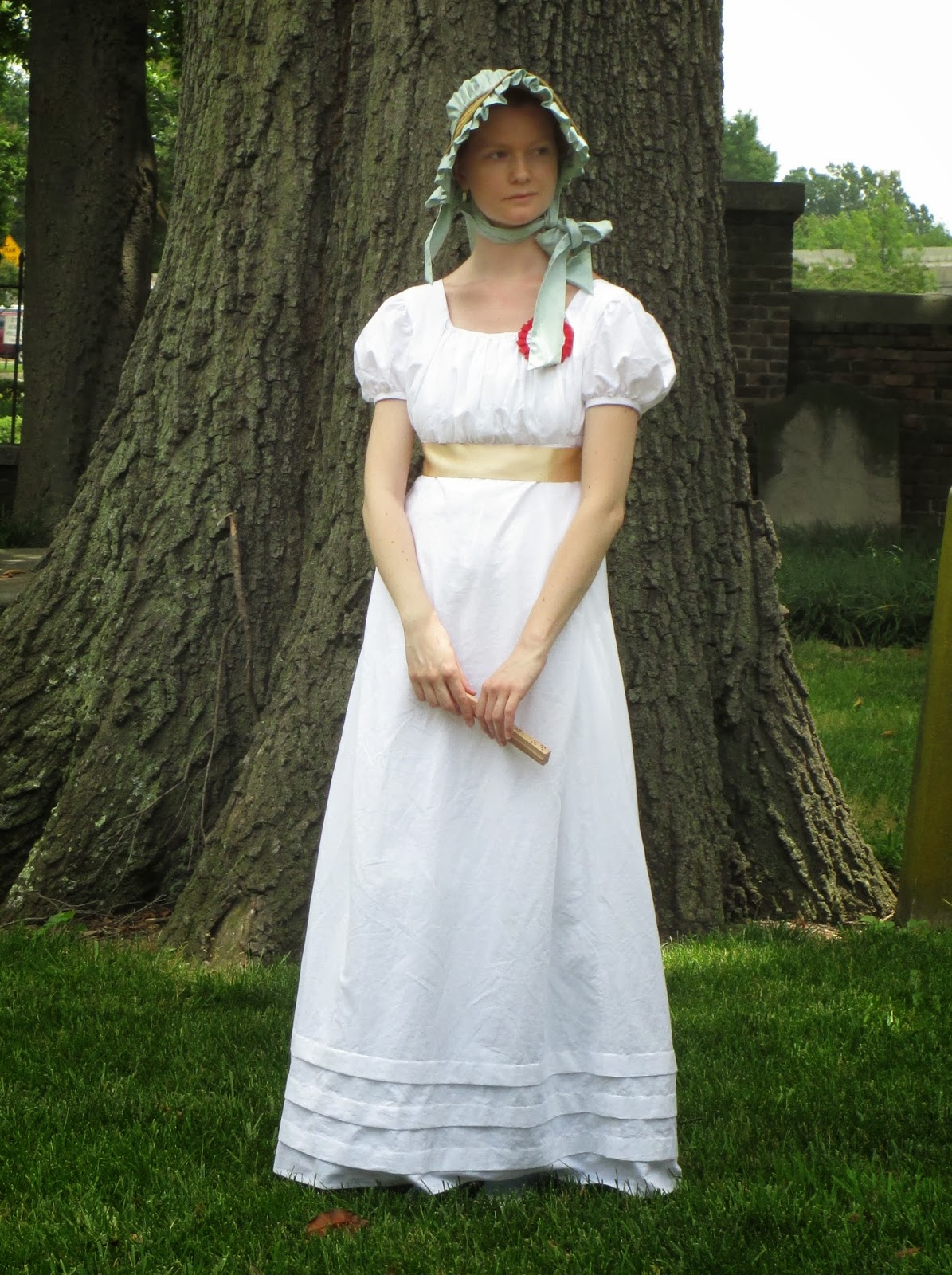 Now for the items I had NOT planned to make at the beginning of the year, but I'm so glad I did! 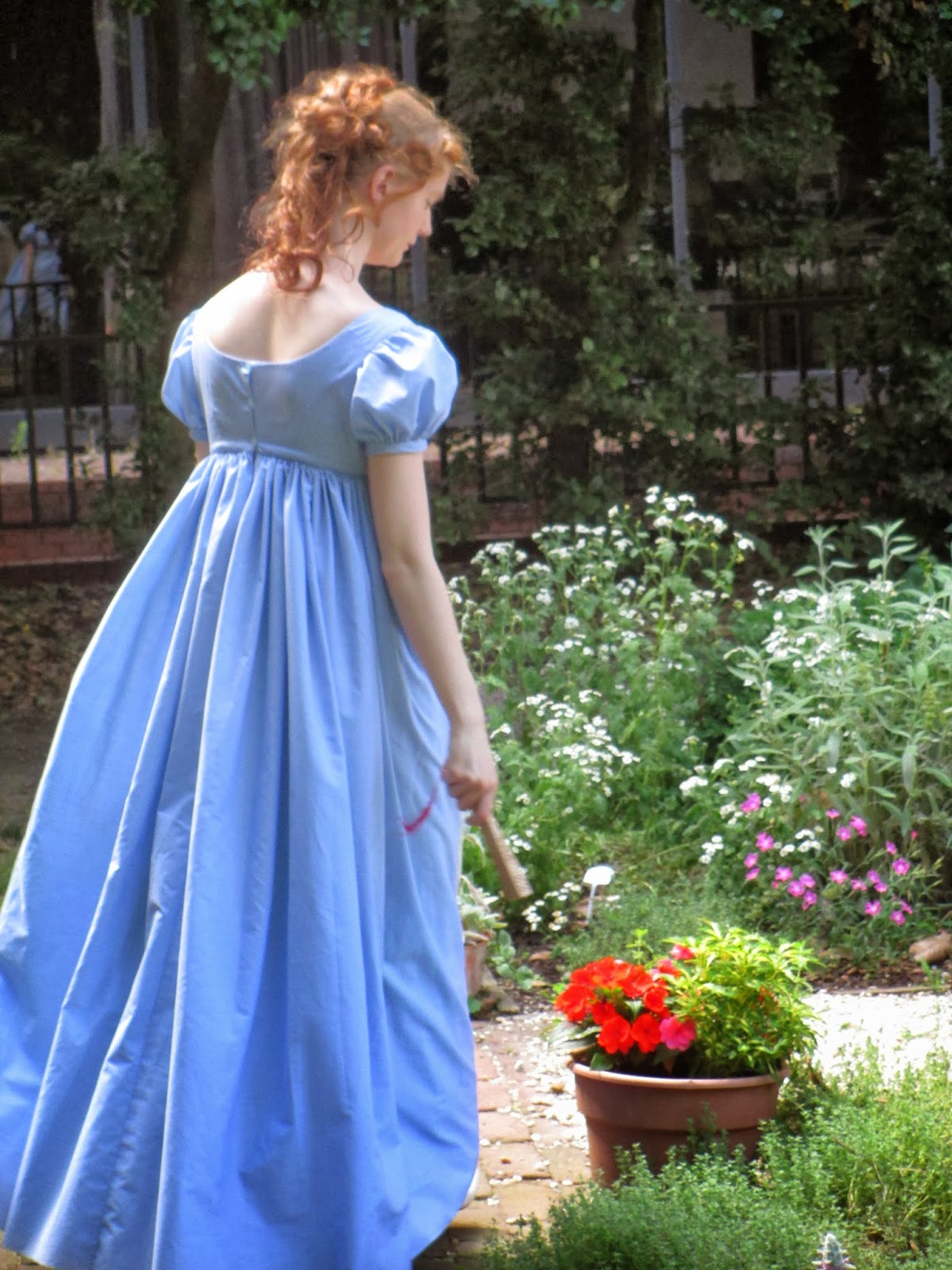 I made it for the Regency Ball back in March, and I've worn it to numerous RSV events since I moved here in April. 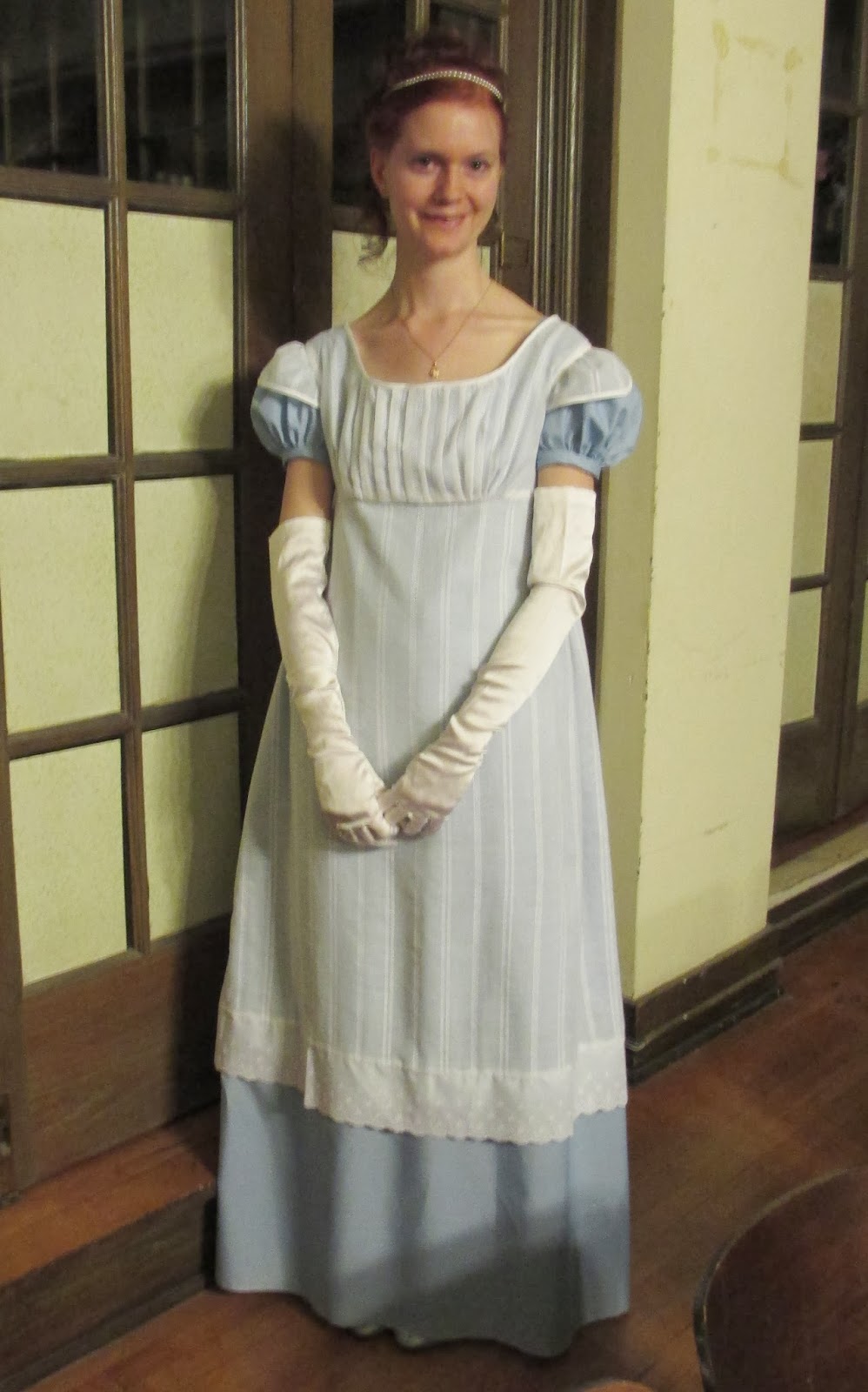 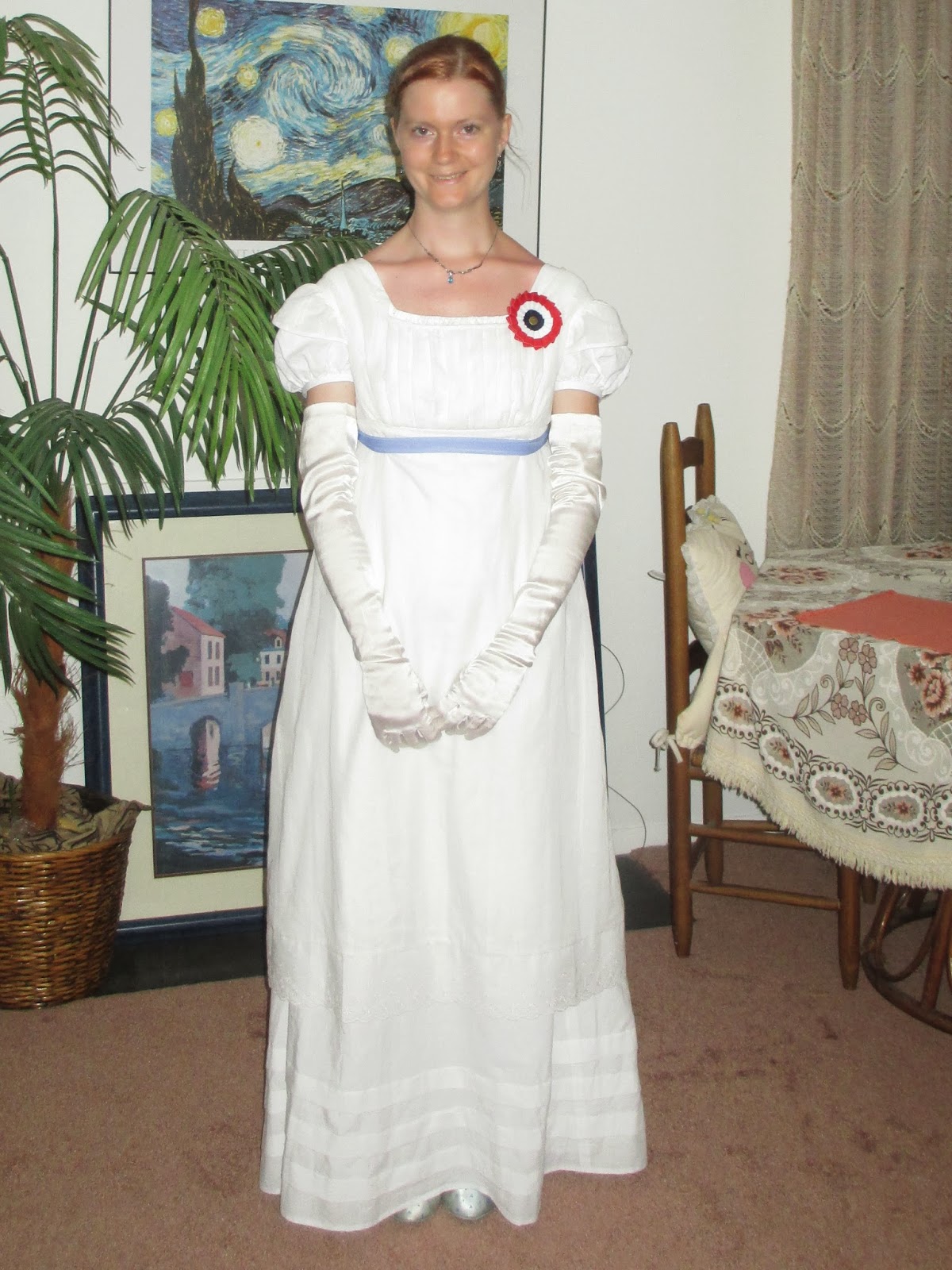 This gown has now been worn to TWO Regency balls, over both the white and the blue day dresses.  Also, I seem to know only one way to pose for pictures.  :p 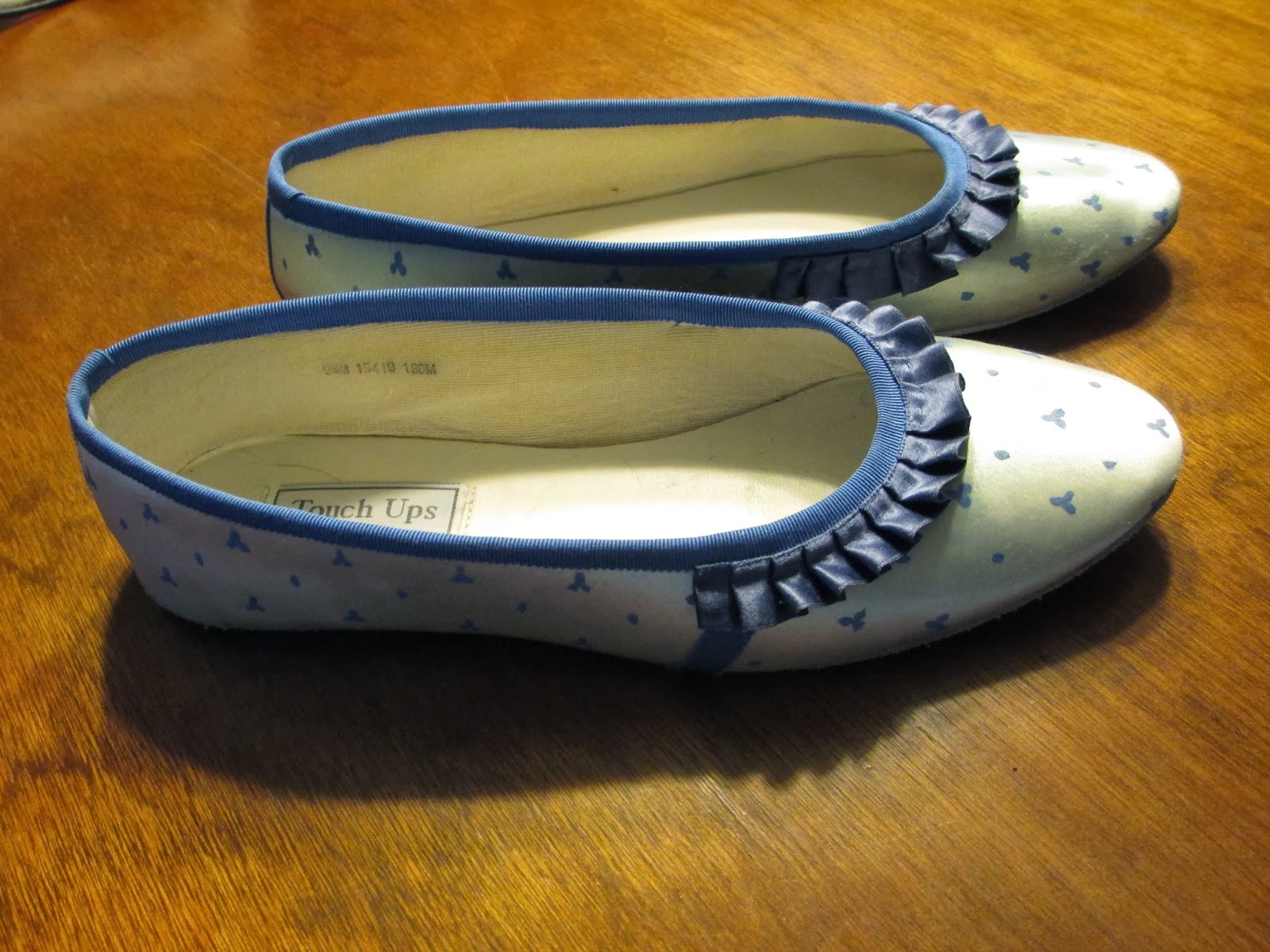 This was such a fun project. 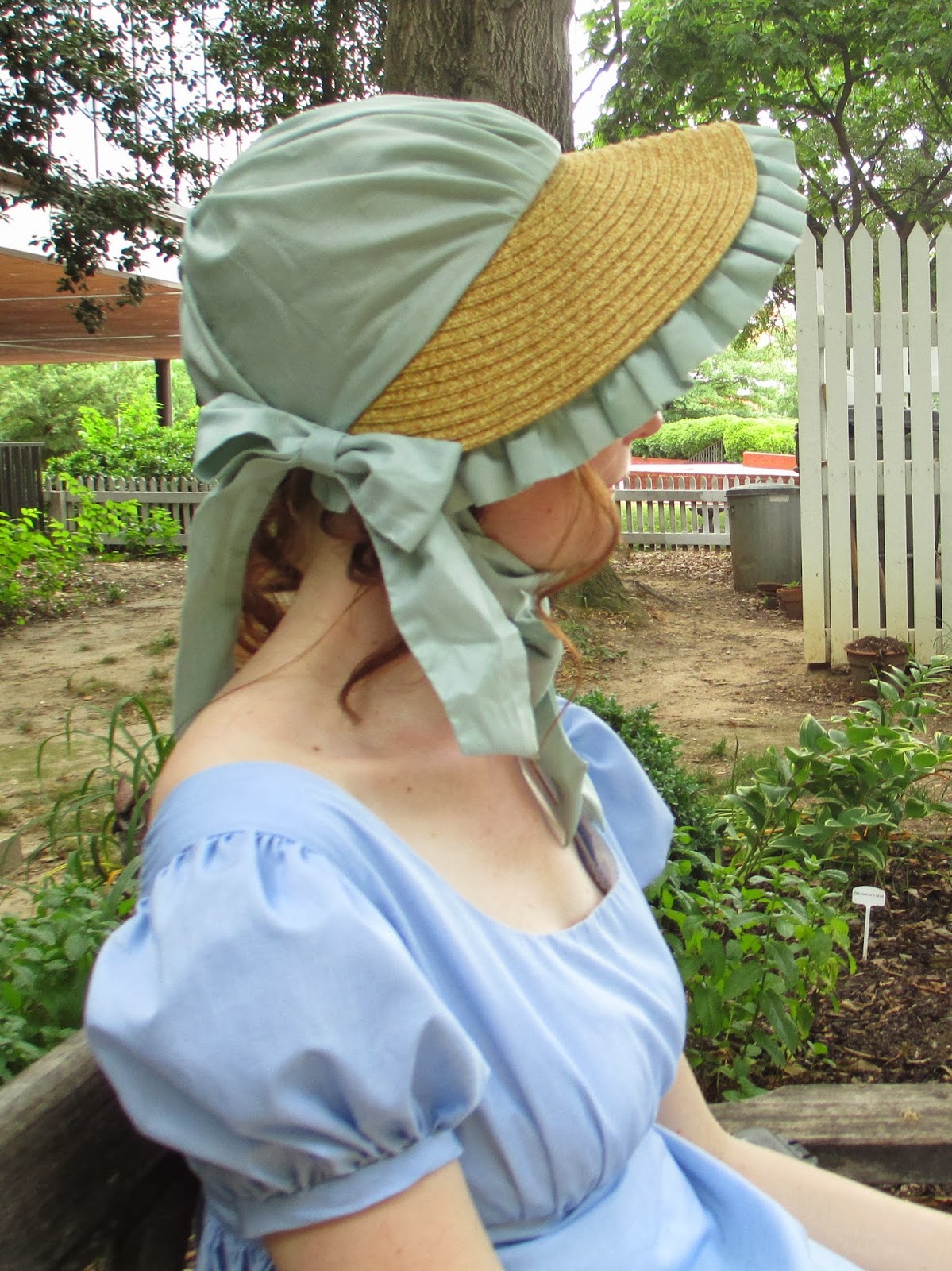 I bought an ugly straw-brimmed baseball hat at Walmart, and turned it into a Regency bonnet! 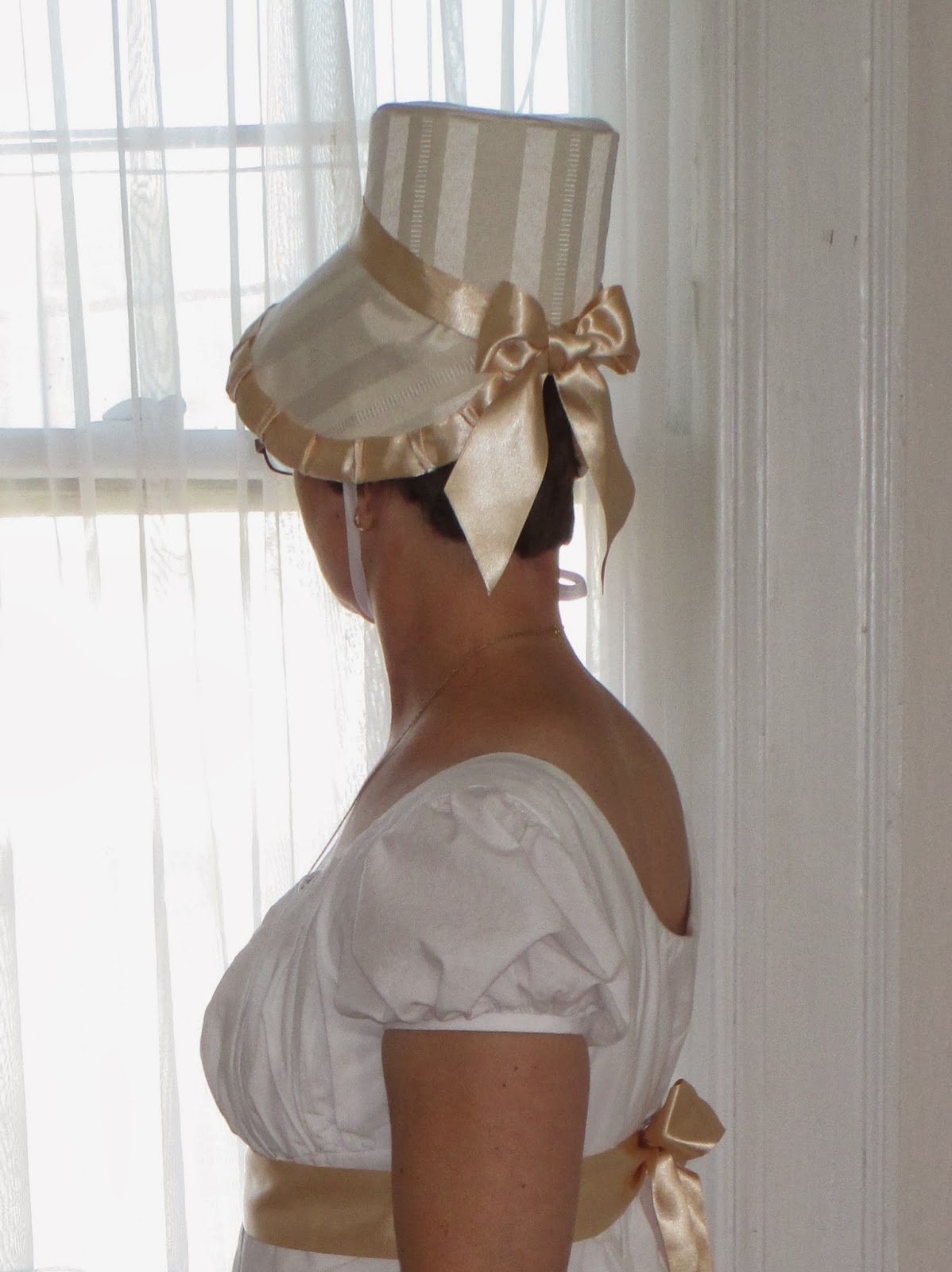 I finished this bonnet just in time for my mom to wear it to the RSV Ladies' Tea during her visit in October.  I drafted the pattern myself! 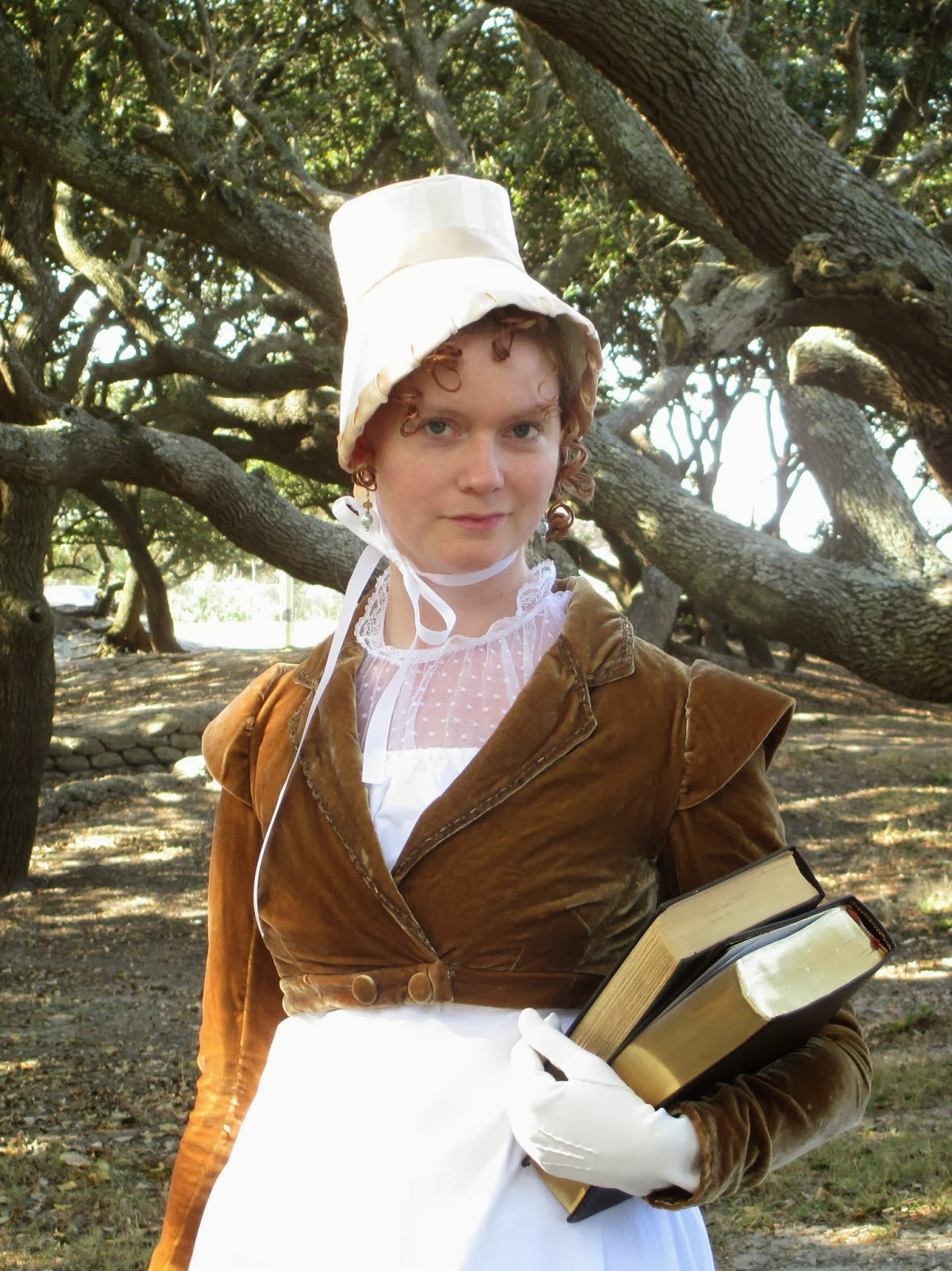 This was an ill-fitting modern jacket before I cut it short and tailored it to make a well-fitted Regency spencer.  Also, the sleeves are removable so I can wear it as an evening bodice if I so choose. 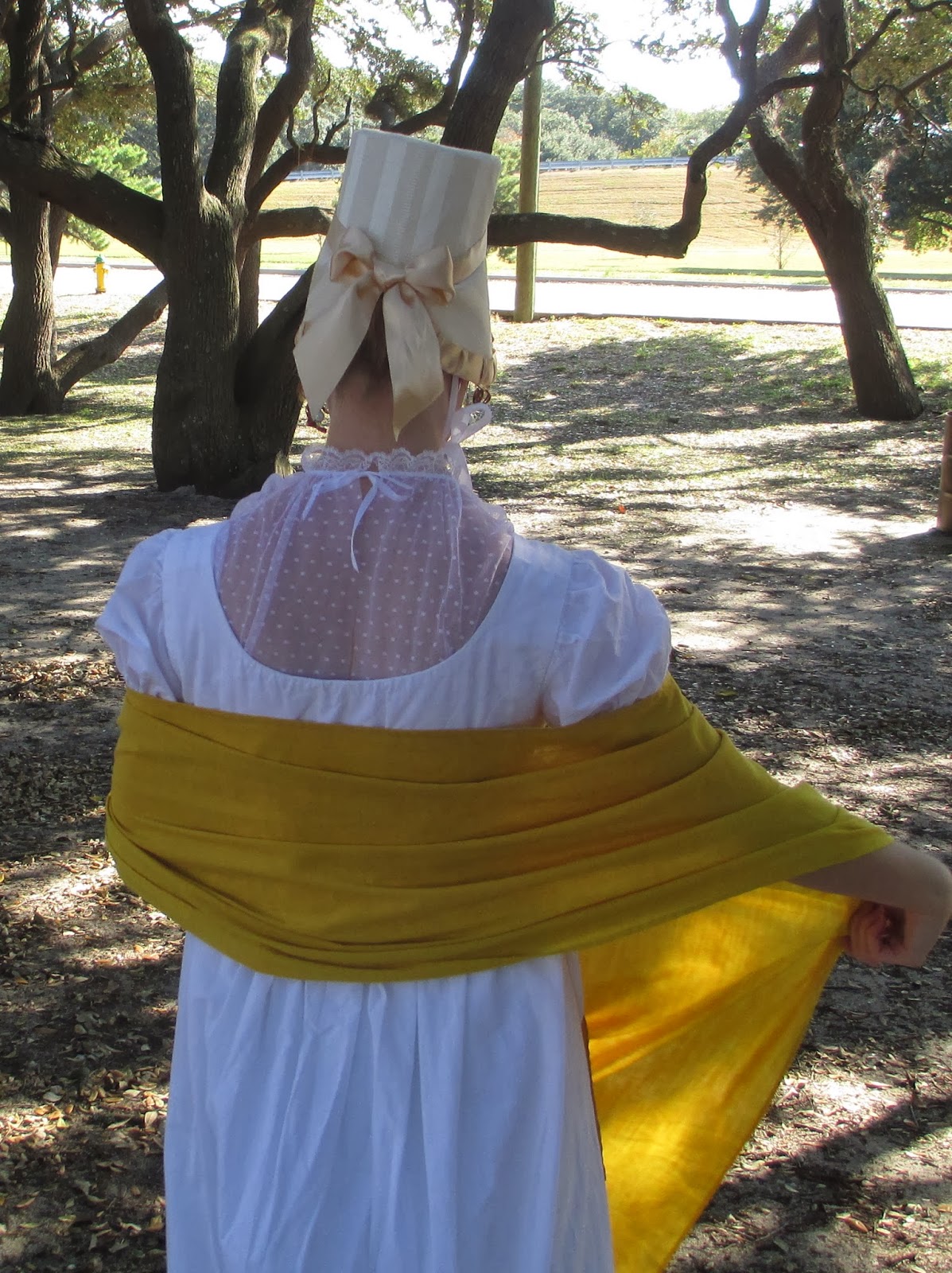 This one was super simple to make.  It's actually less simple to tuck all the edges neatly under the neckline of my dress.  :p 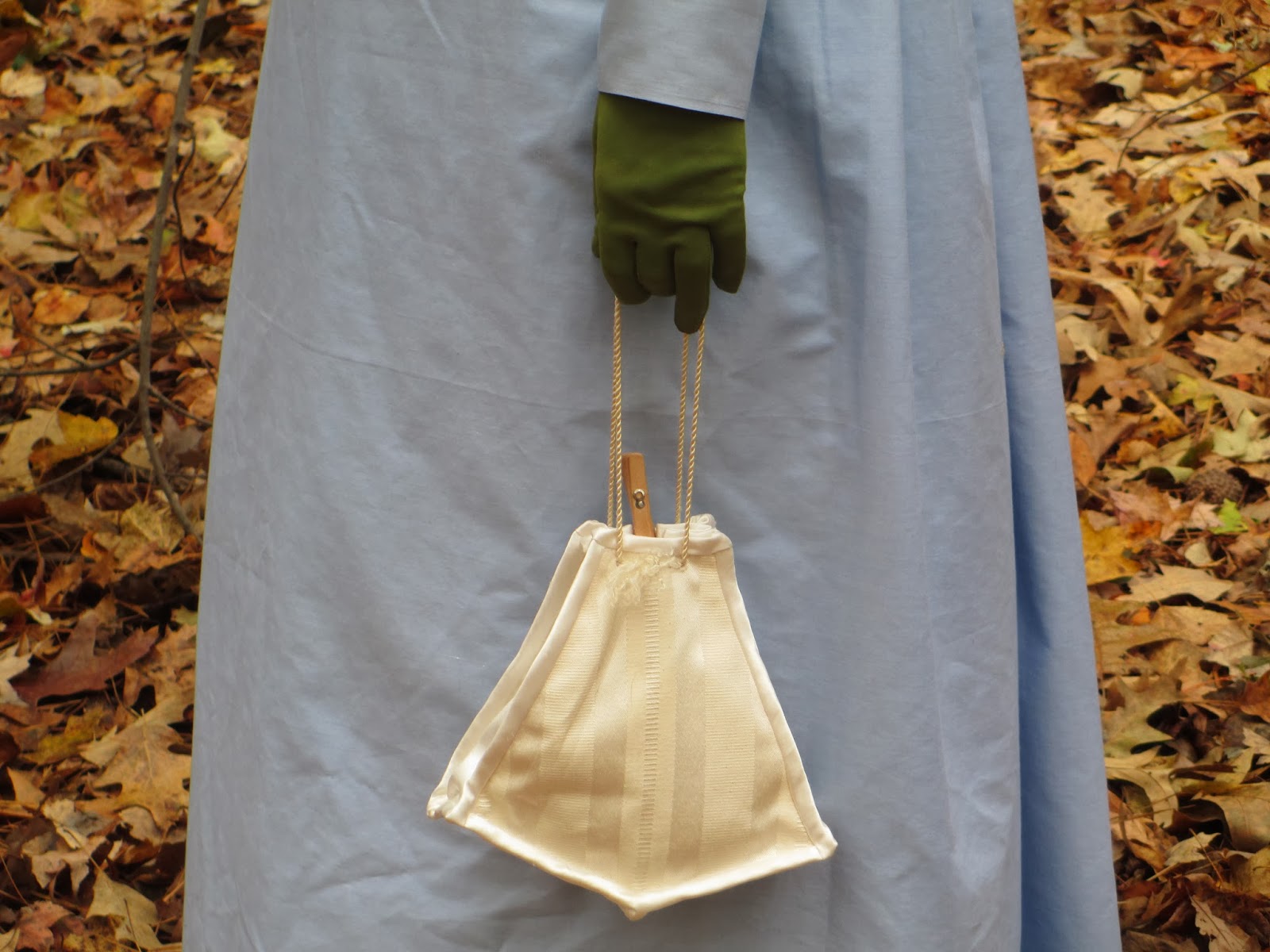 I also drafted the pattern for this reticule, made from the scraps of the striped bonnet. 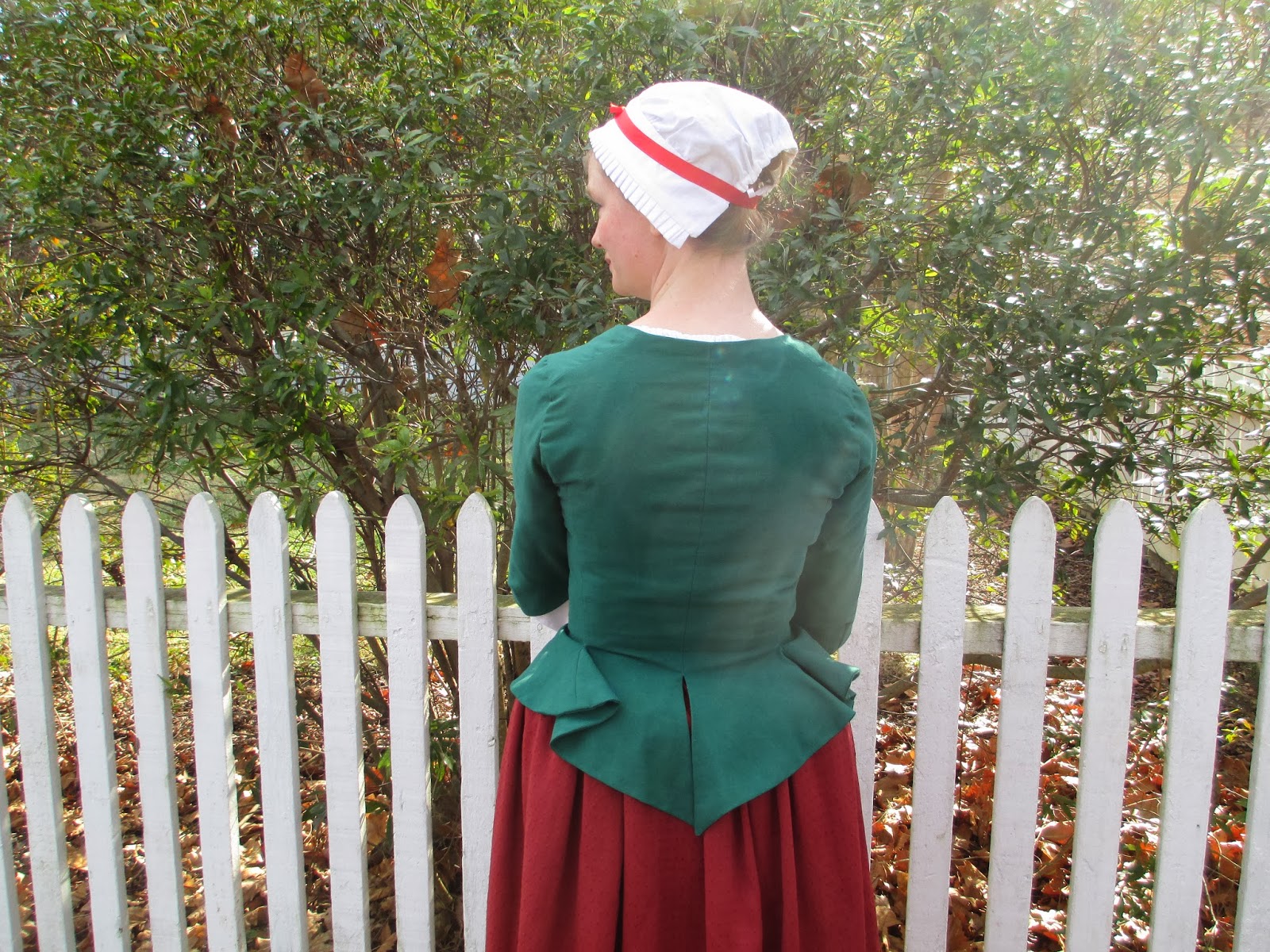 Made from a bedsheet.  True story.

And that's my year in review!  I made everything from fabric that was already in my stash, or purchased for specific projects before December 31, 2012.  I spent less than $200 total, and that was on notions, trims, and accessories.  Now I can buy fabric again, and my first purchase of 2014 was this remnant of royal blue cotton velveteen: 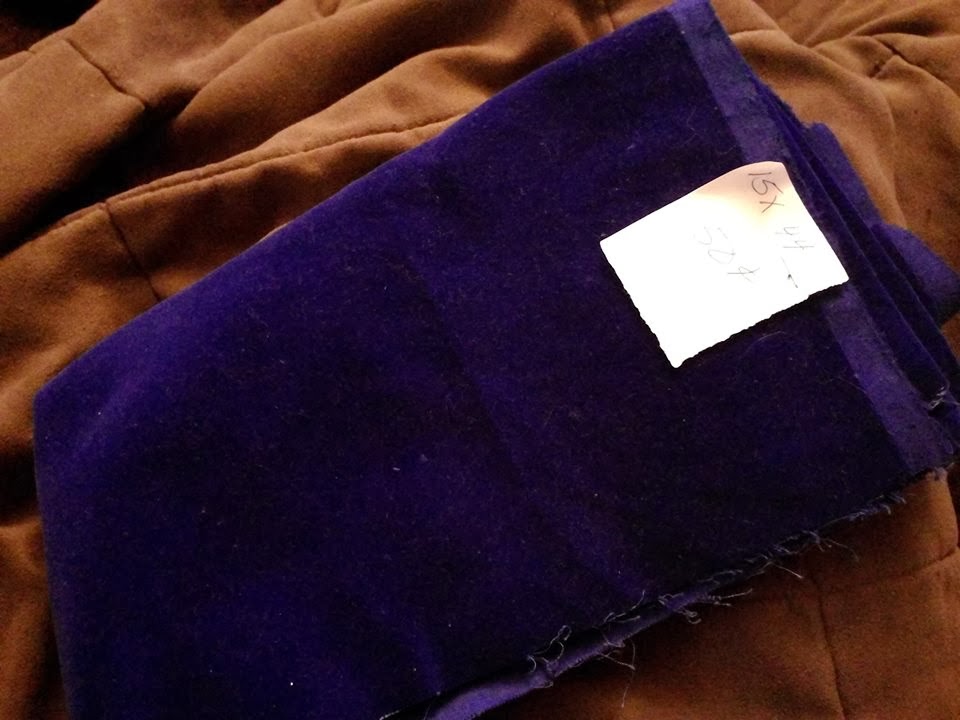 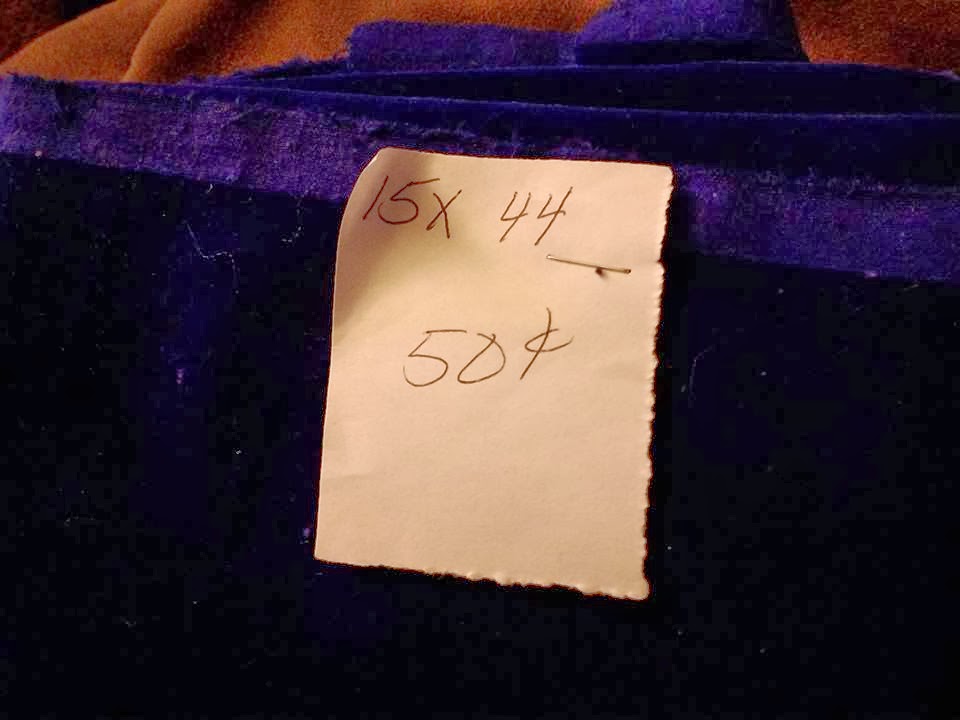 This purchase actually represents an enormous amount of self-control.  I bought it at the Colonial Williamsburg Costume Design Center (where I work) from a table in the Accessories department that has held an ever-changing selection of fabric remnants and craft supplies for sale since...  August?  I've walked by this tempting buffet every day on my way to the break room, and I didn't cave once!  I did purchase some buttons and crochet hooks, but they're not fabric so it was ok.  :p  But now that I'm back - watch out!
Posted by Chelsea at 6:50 PM