The Day of the Doctor!

As an avid Doctor Who fan, I was of course very excited about the 50th Anniversary episode.  Brian the Engineer and I made plans to go see it in 3D on Monday when it was showing in theatres, so I had to make a costume to wear!  I had started an Amy Pond Kiss-o-gram outfit for Halloween two years ago, but never finished it.

Basically I had assembled all the parts I needed, but never got around to putting it all together.

I got the hat and the police belt (separately) at a Halloween store, the checkerboard fabric from Joann's, the tie from Hot Topic, and the Amy Pond ID card at a Star Wars convention last year.  I already had a suitable skirt and white blouse, plus a black blouse that I never wear, to make into the vest:

I removed the collar and sleeves and bound the edges with bias tape turned to the inside.  I also took the darts out of the front of the blouse, since it was a little tight over the white blouse. 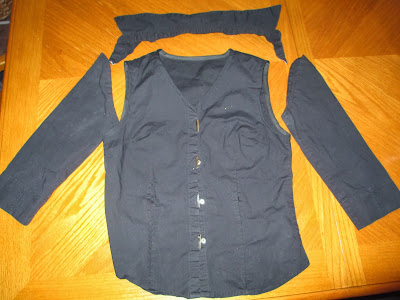 I hated the flashy silver binding and cheap rhinestones on the utility belt and pouches, so something had to be done.


Then I made new pouches from some black vinyl in my stash.  I was in a bit of a hurry, so no pictures of the progress on that.  I also cut strips of the checkerboard fabric for the hat and vest.

And here's the completed costume: 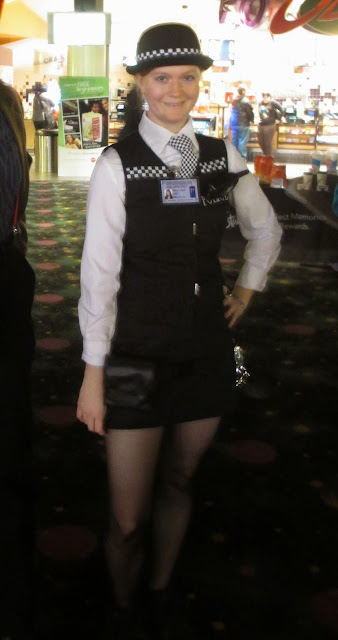 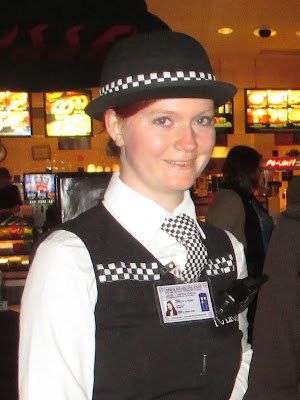 The anniversary episode was awesome, and I had so much fun hanging out with a whole theatre full of Doctor Who fans - many of whom were also in costume!