In my new Etsy shop, you can see several pairs of mid-century gloves that I am selling.  They came to me buried amongst a treasure trove of vintage slips and nighties (the bulk of which will also go on Etsy as soon as I get them photographed) in a cardboard box labeled "old slips."  There's no telling how long they were packed away and forgotten, but some dye that transferred from one pair to another suggests it was several years.  I did not list the damaged gloves for sale, and I also kept a couple of pairs for myself because they were just so darn cute!  So here you will see my vintage gloves NOT for sale.

First is a pair that did not come in the box with all the rest - in fact I don't remember where I got them.  I've had them for years, and suspect they may have been my mom's at some point. 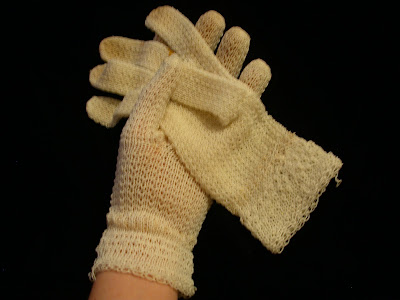 They are a lovely cream color, knit from some synthetic material.  By the feel, I would guess rayon or polyester.  They have sustained some damage over the years, such as a stain on one of the fingers that has also hardened the yarn in that spot, a couple snags, and discoloration of the fingertips.  Some of the latter may have been from me, when I wore them to a dance in college.  I believe they also once had elastic woven into the wrists, but I may be making that up.

My second pair is also of unknown origin, and not the same as the first.  I know I haven't had them as long, but for the life of me I cannot remember where they came from.  I have yet to find an occasion to wear them, but they are just too fun to part with! 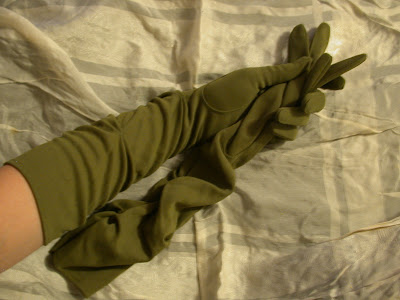 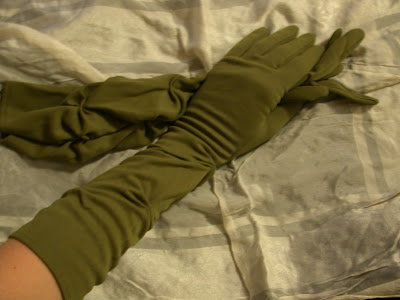 Ordinarily, olive green is one of my least favorite colors, but for some reason I love it on these gloves!  I think it's the ruching.  (If anyone is interested in this style, there is an identical ecru pair in my Etsy shop.)

Now for the new-to-me gloves that I'm keeping.  First we have the damaged pairs.  They were stacked in the box like this: 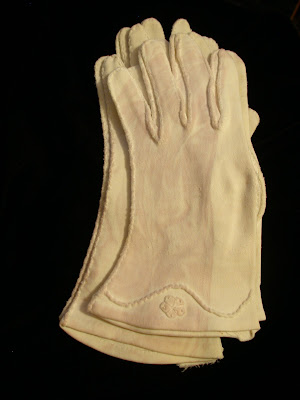 Which caused some dye transfer: 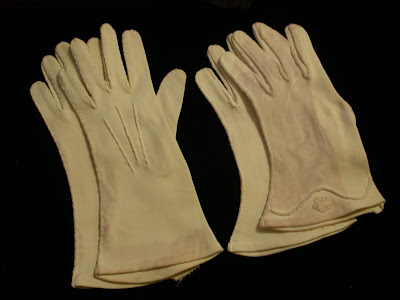 The culprit is this navy blue pair, which sat on top of them in the box: 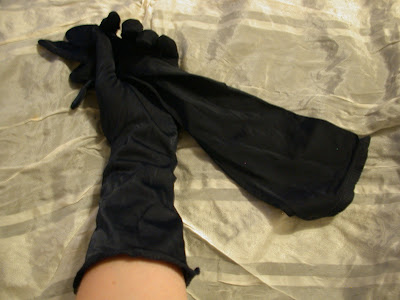 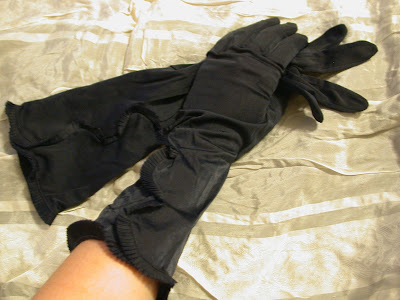 The navy gloves, which are nylon, do not appear to have been adversely affected by the dye transfer, but I'll probably keep them anyway.  One never knows when one will have need of a pair of navy blue gloves.

I will do another post about the damaged gloves and my attempts to restore them.  For now, here are some more photos of them: 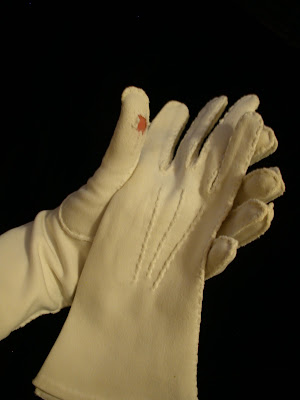 Sadly, the pair with the least dye damage has a large hole worn in the left thumb.  :( 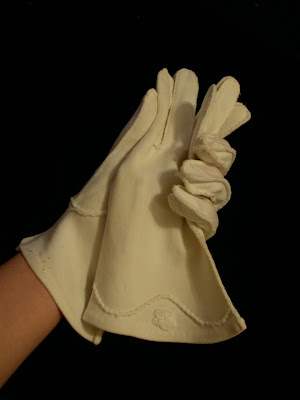 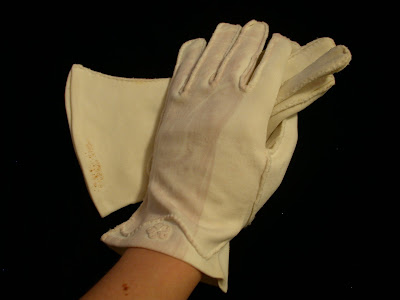 This pair is in better shape wear-wise, but of course has more dye damage.  Also, there is a rusty spot on the inside of the wrist where they were safety-pinned together.  Not sure what to do about that.

The next pair I had actually photographed to sell, but decided against it in the end. 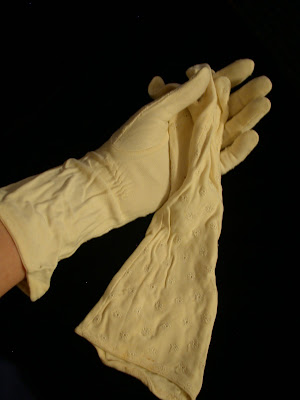 Aside from the wrinkly-ness, they just weren't that high quality to begin with.  And they're beginning to come apart at the seams: 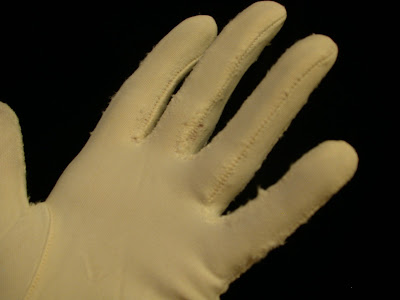 They do have fun eyelet embroidery on the top, though.  Here are the unused shots from my Etsy shop photo shoot: 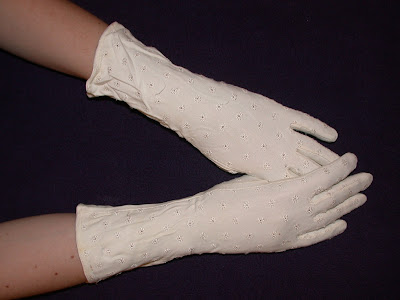 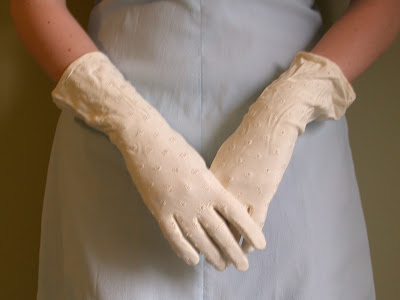 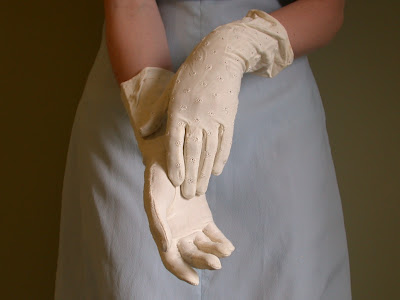 They don't really show the damage and I didn't want to be misleading, so I just ended up not listing them.

Now for the gloves I could not bear to part with!  I think you'll see why... 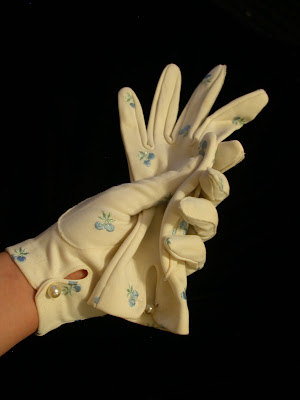 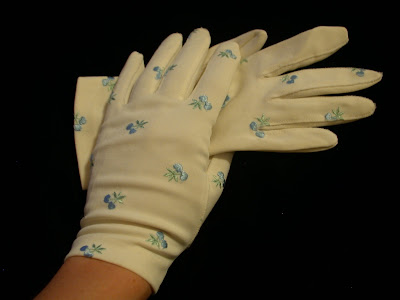 Aren't these too fun?  I saw them and decided immediately that they would be the perfect gloves to wear with my Tea With The Queen outfit - which I will blog about soon.  It is precious.  Much like these gloves.  :p

Lastly, my absolute favorite pair from the box: 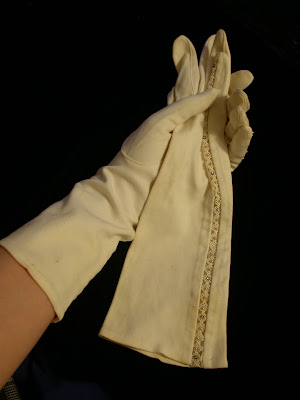 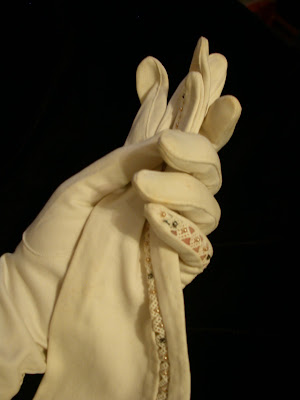 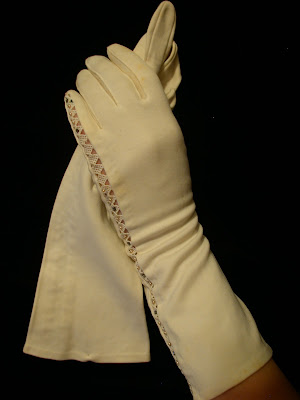 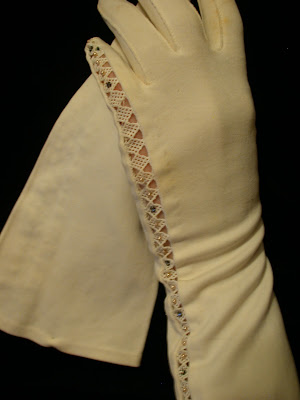 I'm sorry, but there is no way I was going to list these beauties for sale.  They are too elegant, and I love them too much.  I may use them as a "something old" for my wedding someday, in fact.  They need spot cleaning, and some of the beads are missing, but other than that they are in excellent shape.  I'm betting the lady who owned them only wore this pair for very special occasions.  I know I would!
Posted by Chelsea at 9:18 AM