As promised, here is my newly-completed muff cover: 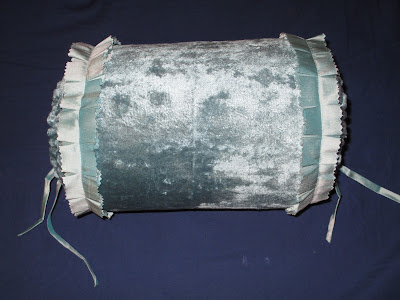 Once again I followed Koshka-the-Cat's tutorial, with some minor changes.
I started with the trim, though at the time I made it wasn't sure what I was going to use it for.  I just knew I couldn't let four 1 1/2" strips of 100% silk go to waste!

My original plan for this custom-made trim was to use it on a hat, stomacher, or possibly shoes that I would make at a later date to match a future gown of similar color.  Then I found this rectangle of upholstery fabric in my stash, and decided they looked smashing together.  I was still thinking shoes when I stumbled across the wide and wonderful world of interchangeable muff covers, and suddenly realized that I had just enough of both materials to make a very pretty one!

Before I applied the trim I had to press it nice and flat. 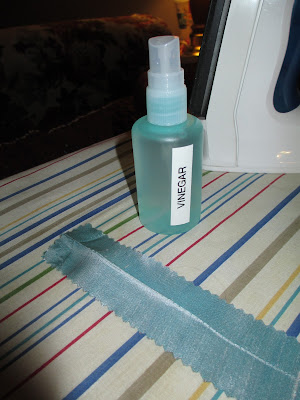 I used vinegar, which I keep in a little spray bottle by my ironing board, to ease out the hard creases.  Just a little spritz and iron it dry.  The advantage of vinegar is that it won't leave water spots - even on 100% silk!  The disadvantage is it tends to make the whole house smell like vinegar.  :p

I applied the trim in box pleats, and cheated slightly as I didn't have quite enough to cover the full length of my muff cover.  The undersides of the pleats do not meet in the middle as they should, but it's close enough for me.  I sewed them on while my rectangle was still flat, leaving the end pleat free on one side.  Then I stitched the two short ends together to form the tube, pinning that pleat back out of the way:

Since I barely had enough width to adequately cover my muff base, I deviated slightly from Koshka's tutorial in that I added bias tape along the long edges to form the channels for the cords, rather than folding over the edges of the fabric itself. 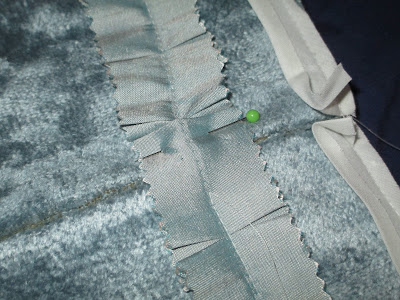 Once the short ends were sewn together, I folded that last pleat back over to cover the seam.  Then I folded the bias tape to the inside and stitched the other edge of the channel by hand, using a backstitch for strength.  I think the bias tape works especially well with such thick material, as it reduces bulk inside the channel. 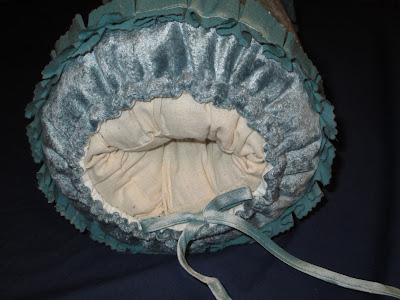 For the gathering cords I used the spaghetti straps that came with the dress when I bought it.  They were pre-made and match perfectly!

And now my muff has at least one pretty cover.  I have two more planned with some lovely velvets from my stash: 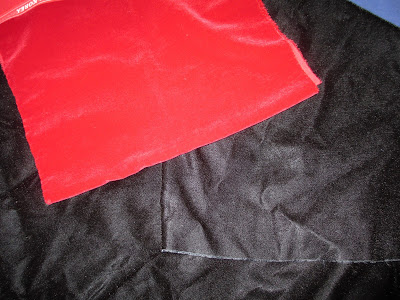 I didn't finish my planned project for the HSF Embellish challenge, so submitted this one instead.

The Challenge:  #4 Embellish!Fabric:  Scrap of upholstery fabric, scraps of silk
Pattern:  None - it's a rectangle. :p

How historically accurate is it?  Fairly, I think. It's based on directions from a workshop put on by the Margaret Hunter Millinery Shop in Williamsburg, which I found through several blog posts.

Hours to complete:  5-7? I fiddled around with the faux box pleats quite a bit to make them look even.

First worn:  Just around my apartment so far. The muff really does keep my hands warm, though!