I've always heard that the French Knot was a difficult embroidery stitch to master - and now I believe it!  I can't seem to be able to stop it from unraveling as I pull it through.  Nevertheless, I have made some progress on my embroidered pocket sampler: 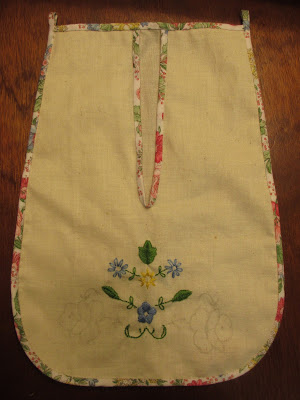 I switched from using the backstitch for the green lines to using the stem stitch.

I also realized, after digging them out of my sewing basket, that this was the stitch I had used on my very first embroidery project - a pair of pillowcases.

My mother tried to interest me in embroidery (and sewing in general) when I was around 11 or 12.  I was not the most willing of pupils.  :p  The unfinished pillowcases have been languishing in the bottom of my sewing basket for the last 15 years or so.  The quilt she had me piecing around the same time, on the other hand, has vanished into oblivion... 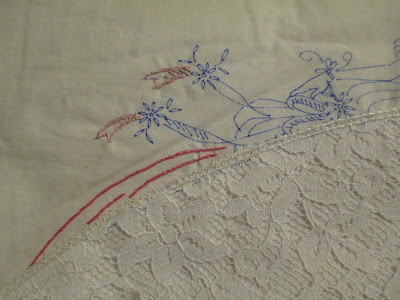 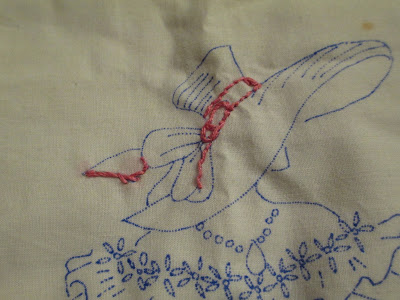 She had started me with the Stem Stitch, and I'm afraid that's as far as I got.  I'm guessing that the flowers around the lady's collar would have been done with a Lazy Daisy stitch, had I gotten that far.

In stark contrast to my lackluster embroidery skills (and patience at age 12), we have a similar pair of pillowcases embroidered (and crocheted!) by my mother's mother: 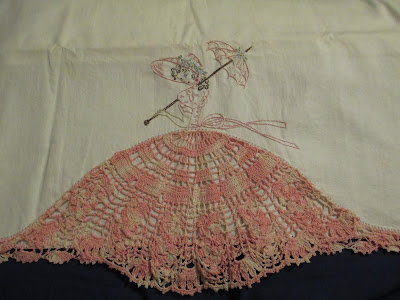 (Fortunately for me, I was a willing pupil when my grandma taught me how to crochet a few years later.) 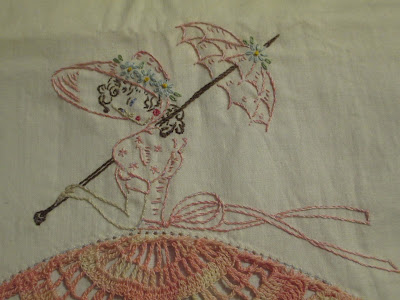 I have no way of knowing how old she was when she made these, she did in fact complete both!  I find myself rather humbled by her stick-to-itiveness.  Perhaps that gene is latent in me... I have so many unfinished projects! 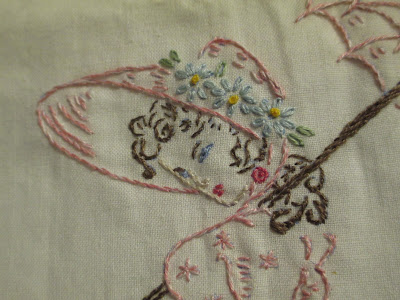 Isn't her embroidery beautiful?  I find myself newly inspired to persevere and learn those pesky French Knots!
Posted by Chelsea at 9:46 AM