I'm going to try to keep a dress diary going for this project, which I very rarely do on this blog.  Usually I finish a garment, wear it, and then blog about it, with any in-progress photos I happened to remember to take at the time.  I'd like to do better.

I've already blogged about my mock-up.  Now it was time to cut out the real thing!  I started with the bodice lining, as the pattern instructed.  I had overlocked, washed and pressed the cotton lining of one of the curtains to use for the bodice lining.  I made my adjustments to the back piece according to the fit of my mock-up.  I angled the center back edge 1 1/4" away from the fold at the bottom, up to nothing at the top: 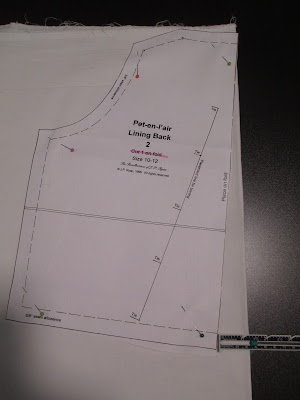 This gave me an extra 2 1/2" at the waist so I have room to grow.  I left the pattern piece aligned with the side edges when marking the boning channels, so it will still have the same potential for being brought in with the ties. 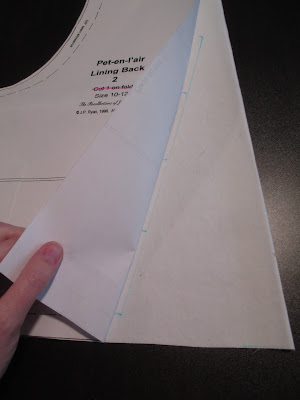 Because I had changed the angle of the center back fold, I stay-stitched the neckline edge and clipped in to the stitching at the center, so it would fold down smoothly: 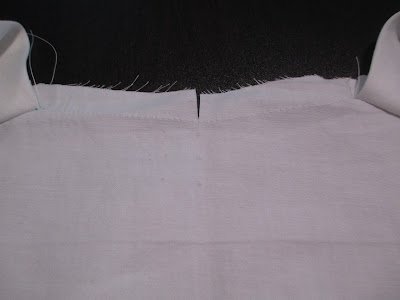 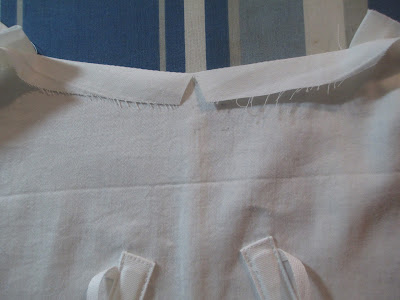 I put the lining together just as I had made the mock-up, with the addition of the front facings.  I tried it on over my stays: 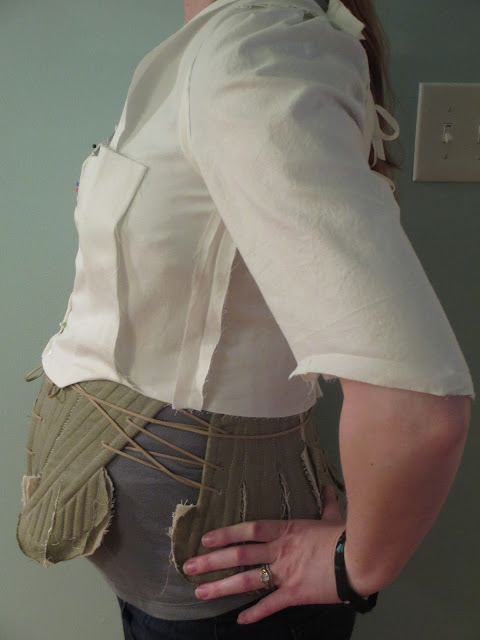 Brian the Engineer tied the laces in back to bring in the excess fabric at center back: 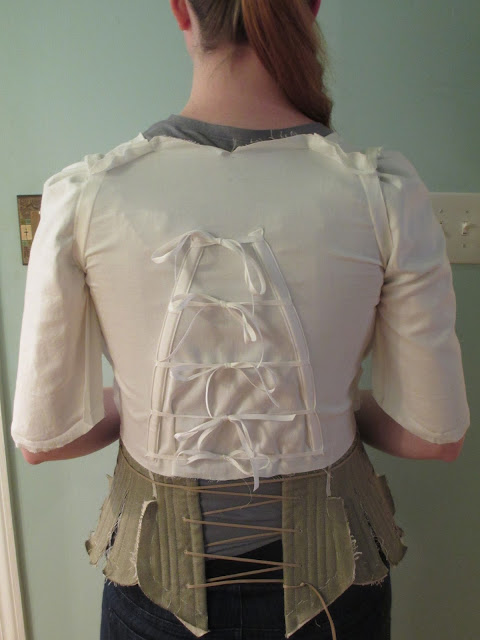 Now I could finally cut my silk!  Which is always a nerve-wracking endeavor.  So far, the most time-consuming part has been prepping the fabric.

The first thing I needed to do was remove the curtain hardware from my fabric.  I actually did this months ago.  The curtains were gathered at the top in bunches, with metal hooks for hanging on the curtain rod.  I took out the gathering stitches first. 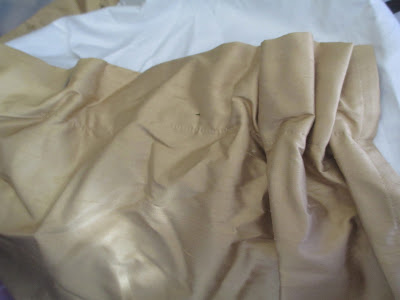 The hooks were held in place by plastic threads: 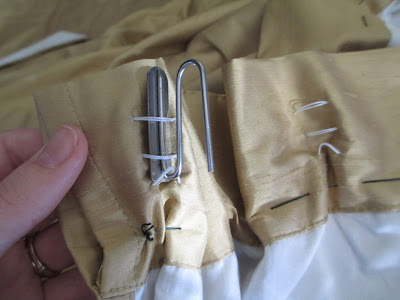 They slid out quite easily: 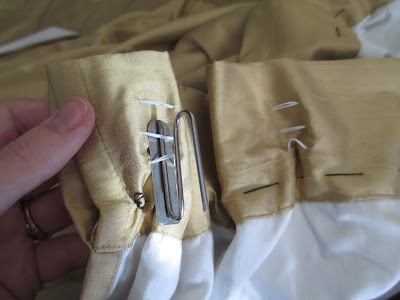 Then I had to remove whatever these things are: 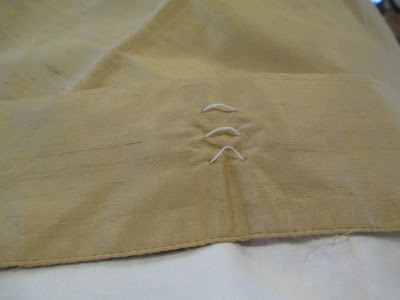 I'm sure there's a name for them, but I don't know what it is. 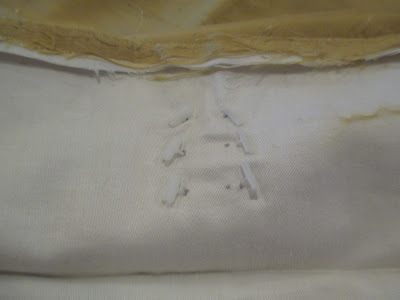 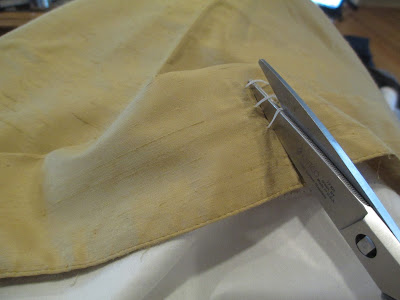 Then I needed to un-pick all of the edges and press out all of the creases from the hems.  I used my handy little spray bottle of vinegar to help release the creases and diminish the stitch marks: 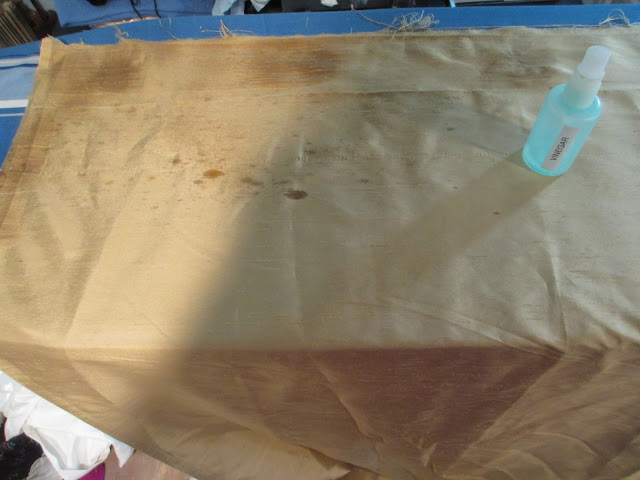 I noticed that two of the six curtains were just the full width of the original fabric, selvedge to selvedge, but the other four had the selvedge only along one side and the other side trimmed away. 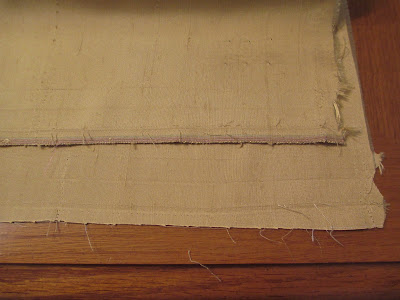 I also found that some of the curtains had a different selvedge edge than the others: 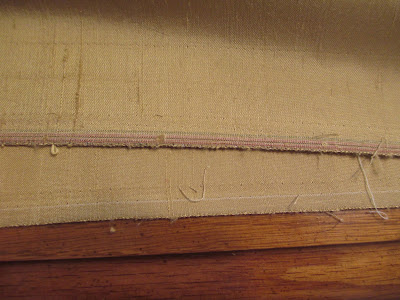 I thought at first that the two different edges meant that they were woven in different widths, but actually the two that are full-width each have a different edge!  Weird.

Anyway, all the unpicking and pressing took forever.  But finally I could cut out the gown!

I started pinning from the top edge of each panel, as the bottom hems of some are slightly dirty from being used as actual curtains.  I had considered sending the fabric to a dry-cleaner, but I was impatient to begin.  I'll have plenty of fabric to play with without using the very lowest edges.  I did have to cut around the holes left behind from the plastic threads that had held the metal hooks in place, though: 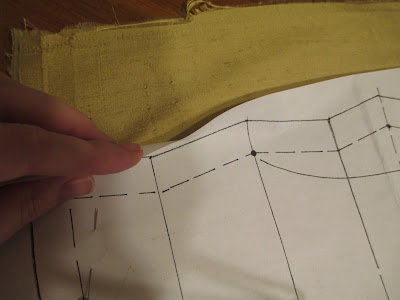 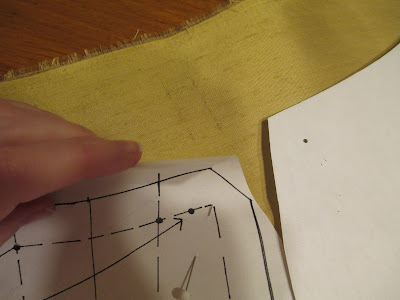 I had to cut the pieces on my dining room table, as my cutting table in my sewing room is not large enough to accommodate most of the major pattern pieces.

I cut everything but the sleeve flounces exactly as the pattern indicated.  I will cut the scalloped edges with my scalloped shears, once I get them sharpened. 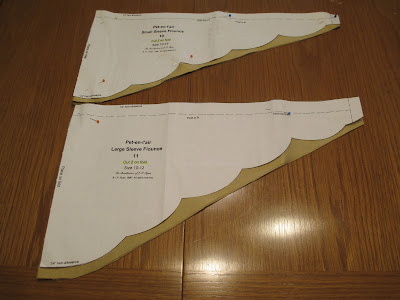 From one panel I got the two front pieces, the sleeves, and the sleeve flounces.  From another I cut the side skirt extensions, the back neck piece, and the stomacher.  I cut two stomacher pieces rather than just one, as I imagine I'll make at least two for mix-and-match.  Two more panels got me the back pieces, and the bottom portions of all panels will be cut into strips for trim!

Just for fun, I laid out all of the pieces on the table after they were cut.  They wouldn't all fit without overlapping! 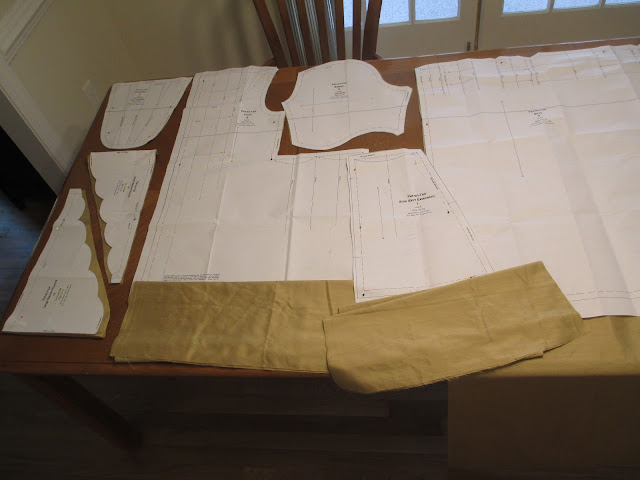 And I couldn't get the whole table in the photo frame, even standing on a chair. 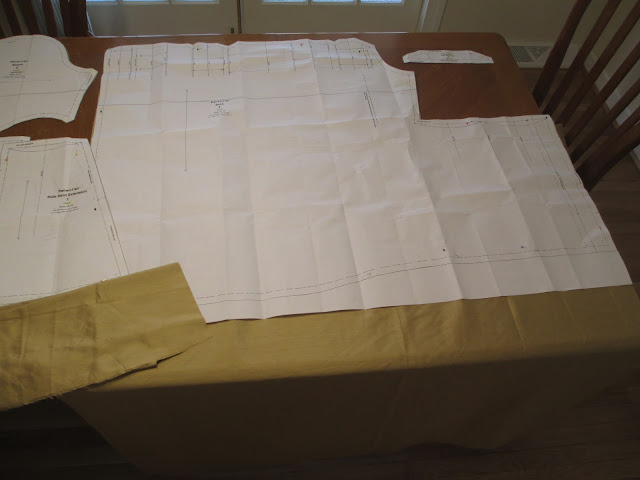 At which point Jazz decided to join me, because clearly I needed "help." 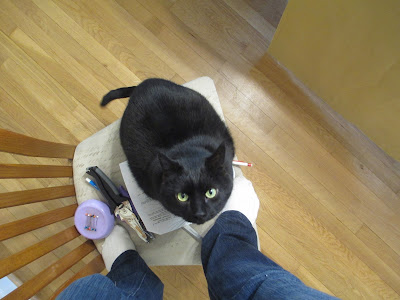 Ok, time to get stitching!
Posted by Chelsea at 1:33 PM