This is another dress that I cut out back in September but never got around to putting together.  Which is a shame because it was such a quick and easy project, but oh well.  It's a summer dress anyway, so I wouldn't have gotten much wear out of it last fall.

I started with VERY limited fabric, even moreso than usual:

The fabric came in the form of two gathered trapezoidal pieces that were attached to a belt for a costume dress that I bought at the same costume sale where I bought the Ivory Hat.  Both pieces were lined with this black brocade-y fabric: 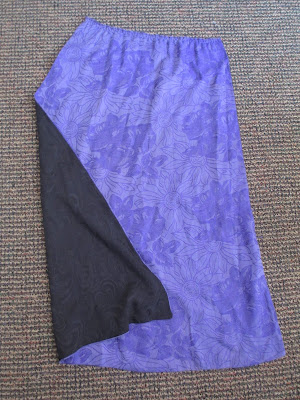 I somehow got it into my head that I could make a dress from just this much fabric, so I cut the two layers apart and later made a cute little nightie out of the black layer from this fabulous free pattern from Sew Vera Venus.  (I may blog about it later.)

For the dress, I chose this 1967 pattern from my Mom's stash: 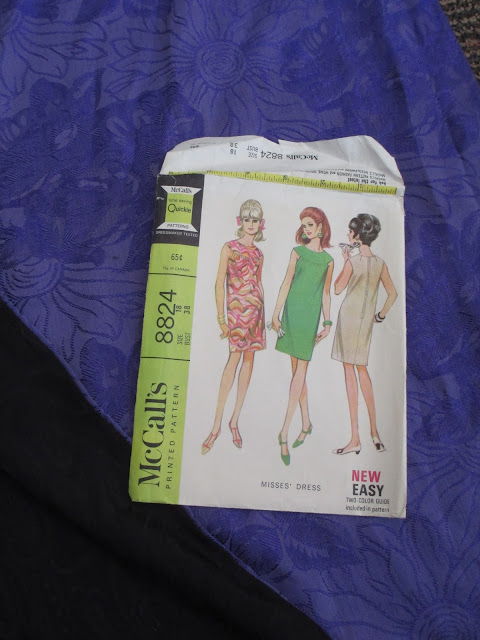 But really the only piece I used was the yoke.  I also modified it because the back of the dress did not have a yoke, but did have a central zipper: 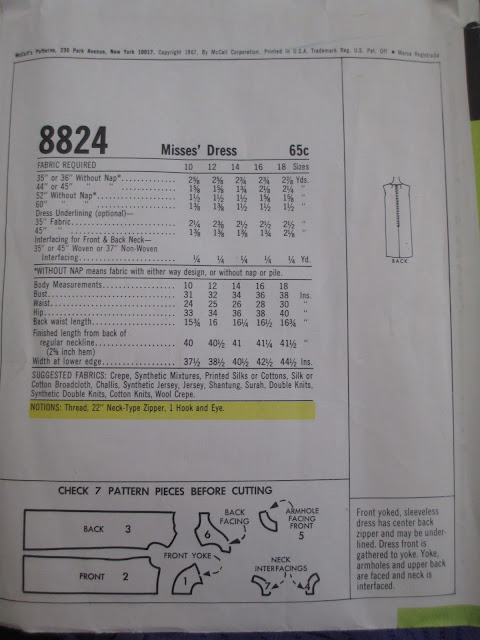 I did not want to use a zipper (because we HATES THEM!) and I also did not want to sacrifice length in order to get the yoke out of my Very Limited Fabric TM.  Luckily, I found an old t-shirt that used to be my sister's, and the color was the perfect match!

I cut two yoke pieces from this shirt, and used the skirt front pattern as a guide for cutting the armholes from the top corners of each trapezoidal piece of my base fabric, but otherwise left them both intact.  This was as far as I got in September.

Now back at my parents' house again, I used my mom's stash of interfacing to cut duplicates of the yoke pieces: 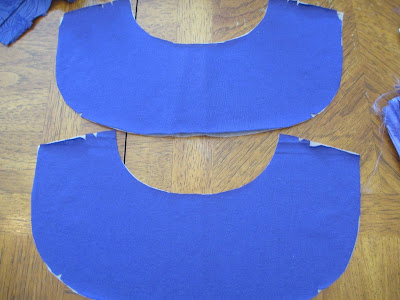 And flat-lined the t-shirt fabric with them, to prevent stretching: 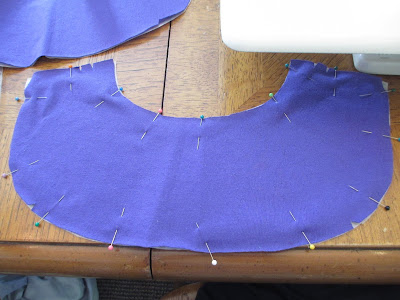 I stitched them together along the outer edges, with the stretchy t-shirt side down.  I always do this when I have two fabrics with different amounts of stretch.  Since the bottom layer of fabric gets moved along by the feed dogs, it doesn't get puckered as the top non-stretchy (or less-stretchy) layer moves smoothly under the presser foot. 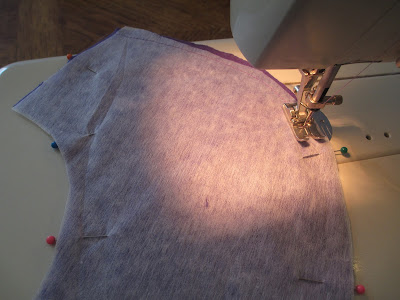 Next I cut two more yoke pieces from some lining my mom had leftover from a dress she had made, which was just the right color, as well.

I tried on the yoke pieces for fit, and found that I did not like how high up on my neck the front piece came.  I really struggle with wearing anything that has a high neckline (turtleneck sweaters are right out!) so I measured down an inch and a half from the center front, to make the finished edge lay just below my collar bone.  I smoothed this line back in to the seam allowance at the shoulder, then copied it on the other side and stitched along this line and across the shoulders to attach the lining: 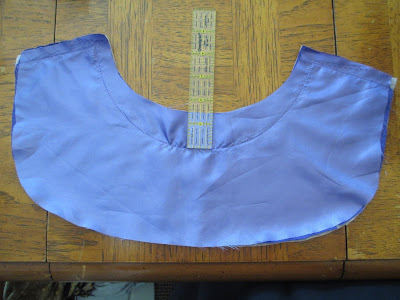 I did the same with the back pieces, except I kept them at the original stitching line.  Then I pinned both yokes to the front and back of the skirt sections, which I had already sewn together at the sides.  I tried this on and adjusted the front slightly to make the two sides match.  Then I took it off and moved the pins so that they were each 5/8" from the edge of the yoke: 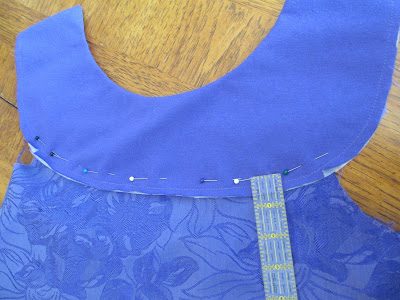 Flipping it over, I measured up from the pins on the inside and marked 5/8" seam allowance on the skirt: 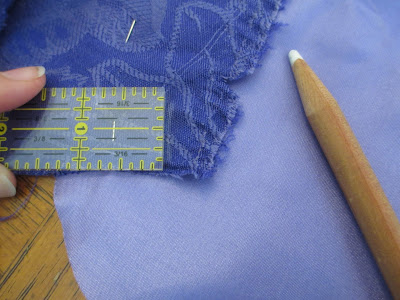 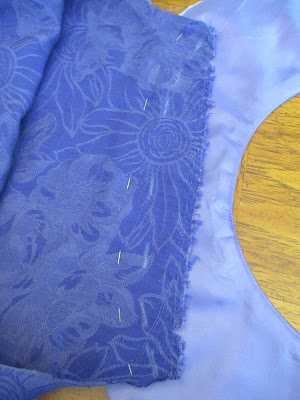 Then I took them apart and trimmed the skirt on this line: 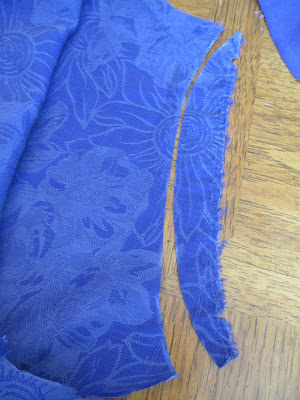 Before I attached the yokes I needed to face the armholes.  I traced one side, placing the side seam on the fold: 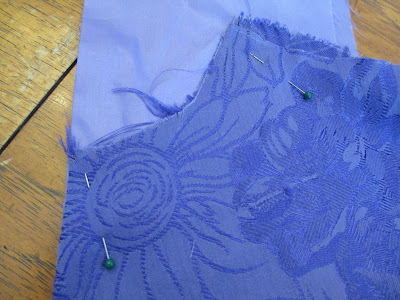 Then marked in 2" from the traced line: 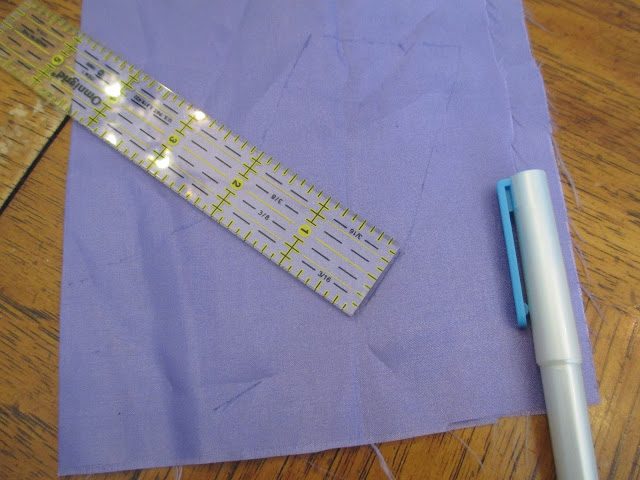 I tried it on again and marked with pins where the back yoke overlaps the front, then attached buttons to the front yoke and fabric loop buttonholes to the back on both shoulders.  This allows me to get in and out of the dress without the aid of a zipper!  :D

My mom has an enormous stash of buttons because she obtained a large display case full of buttons when a store in town was going out of business almost 30 years ago.  This case now lives in my parents' garage, so it was little wonder I was able to find six purple shank buttons that matched my fabric: 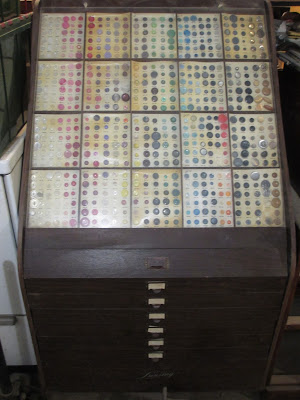 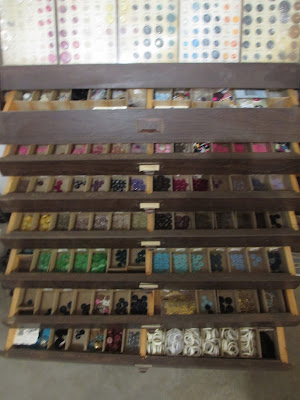 Finally, here's me in the dress!  Gretchen once again took photos for me: 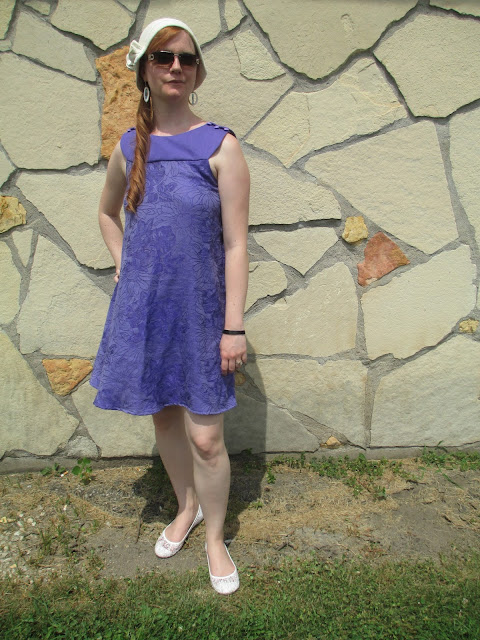 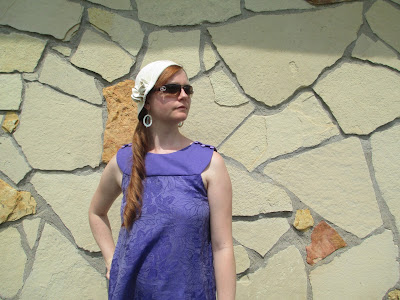 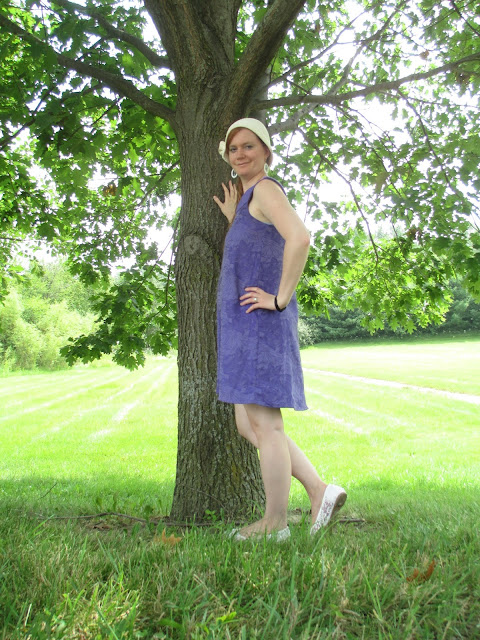 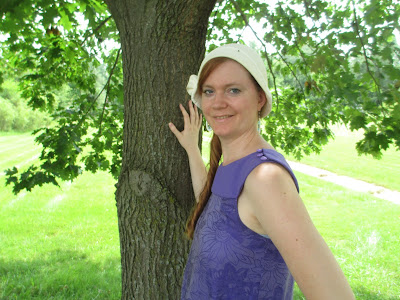 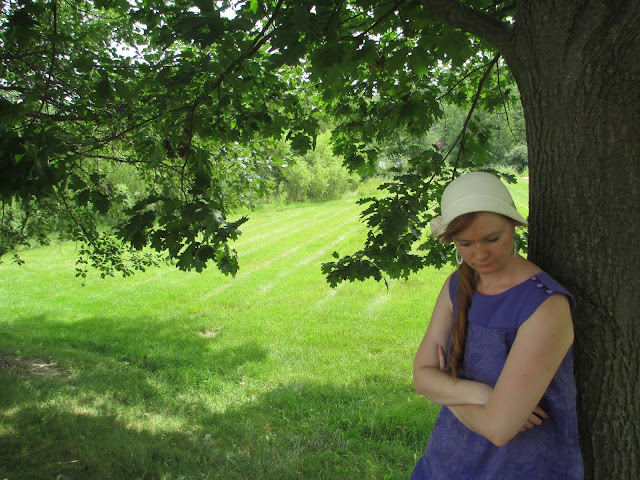 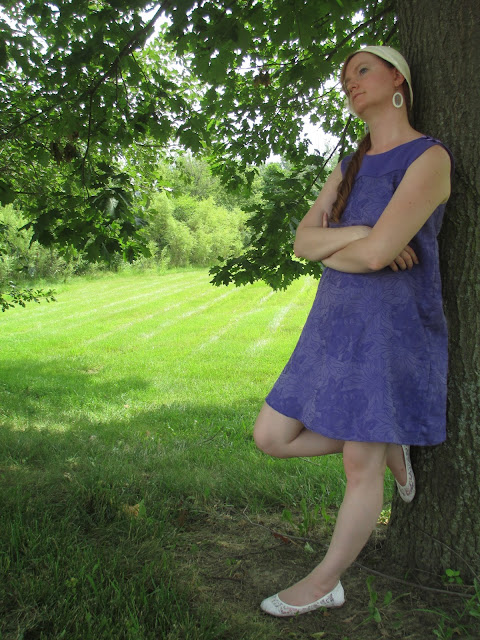 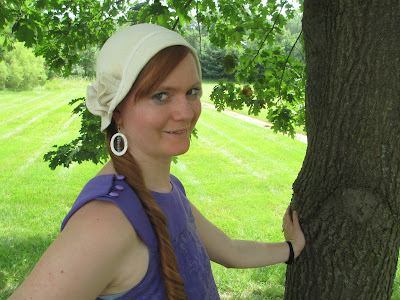 The dress is very comfortable to wear, plus cute and casual.  It's a perfect summer dress.
Posted by Chelsea at 11:44 AM