The first weekend of March was my first Civil War costuming event - the Battle of Hampton Roads weekend at the Mariners' Museum in Newport News, Virginia.  I was invited to participate in the re-creation of an antique flag in the museum's collection, to be presented to Abraham Lincoln on Sunday afternoon.  It was a very cool project to be a part of!

There was a small, core group of us who worked on the flag continuously over Saturday and Sunday, with several more volunteers stopping by and helping out for a few hours at a time.  Most of the ladies you will see in historical dress are my former co-workers at the Costume Design Center at Colonial Williamsburg, which is how I found out about this project.  It was fun to reunite with them for the weekend.

We pinned the stripes together in numerical order, with the raw edges pre-pressed under on one side and over on the other to create flat-felled seams: 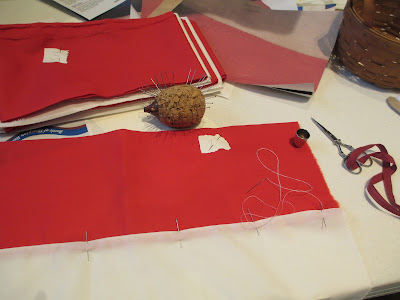 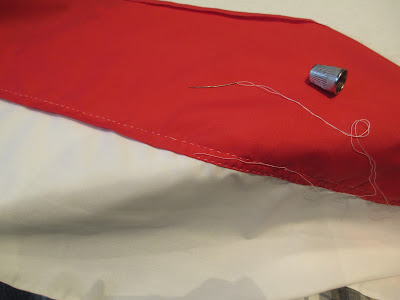 The flag we were re-producing is 74 1/4" by 144", which is a very large flag!  It was slightly disheartening to get to the end of one of those long seams and realize that it needed to be sewn again.  :p   And I only worked on the shorter stripes! 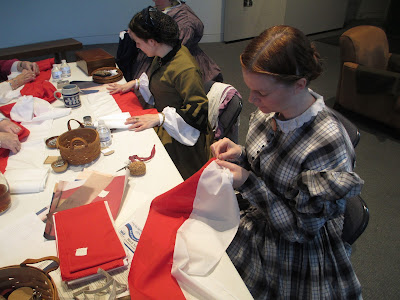 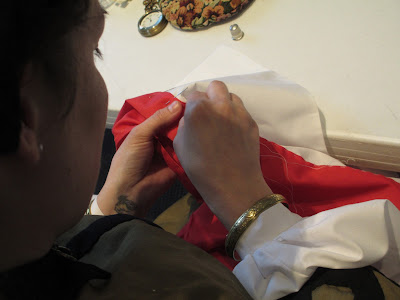 Lauren, one of the museum coordinators, was kind enough to send me some photos of the original flag: 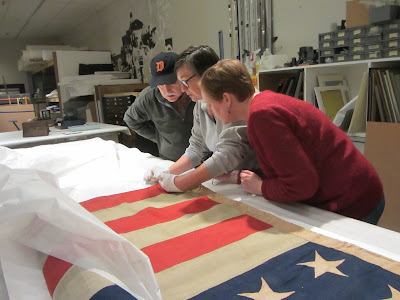 These photos, among others, played on a slideshow next to us while we worked.  It was very cool to see what we were re-creating. 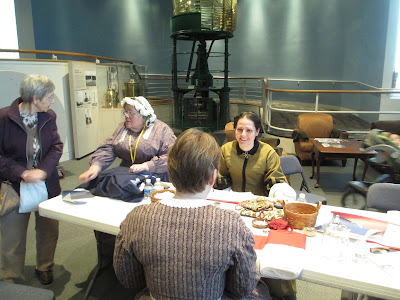 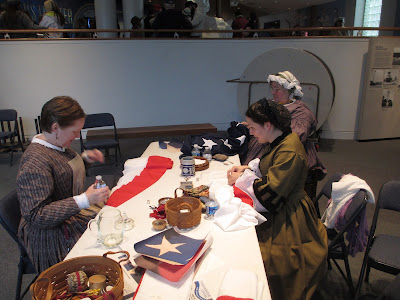 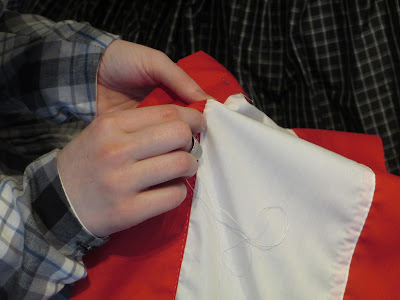 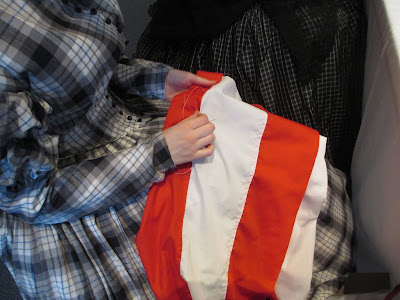 Thank you to my wonderful husband, Brian the Engineer, for taking all of the photos of me on Saturday!

On Sunday we had even more volunteers helping out: 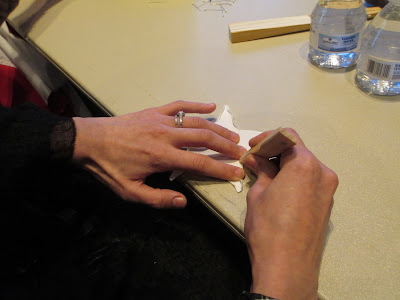 Finally it was time to start attaching the stripes to the canton! 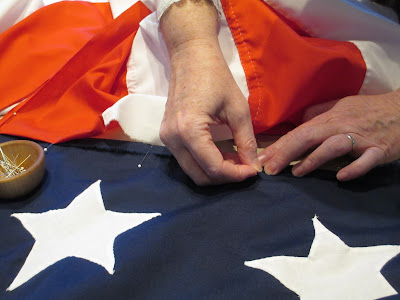 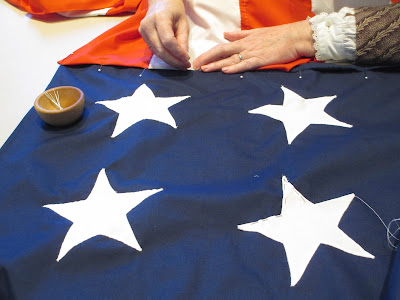 Once the pieces were attached, we took a short break for a photo op with President Lincoln: 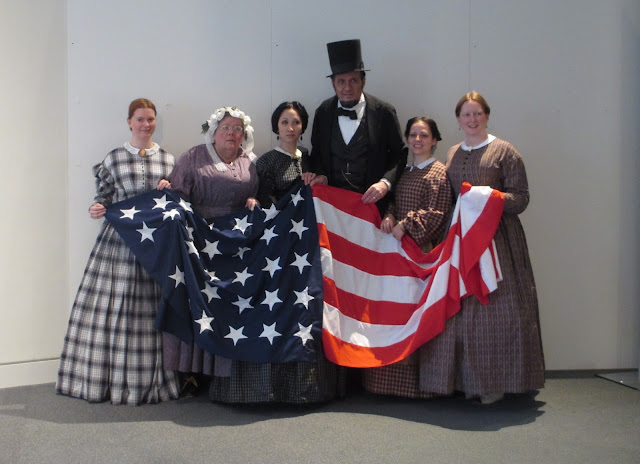 And eventually it came down to lots of people sewing stars at the same time: 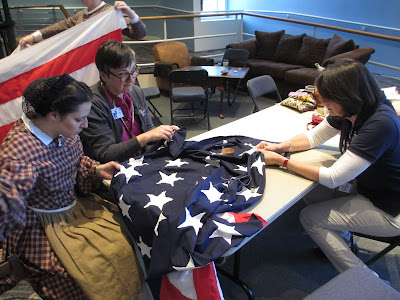 Which got a little cozy: 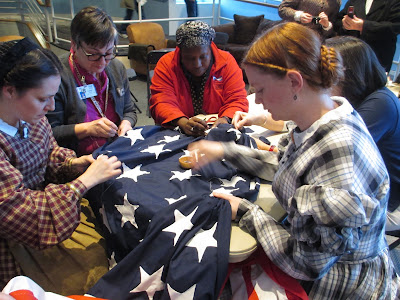 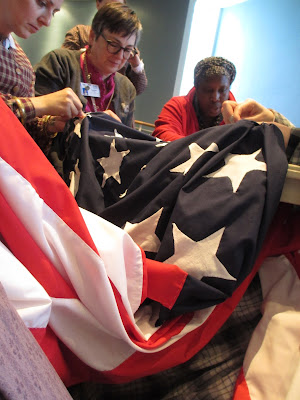 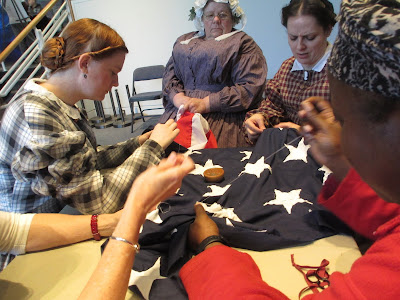 Thank you to the kind volunteer who took these photos on my camera for me! 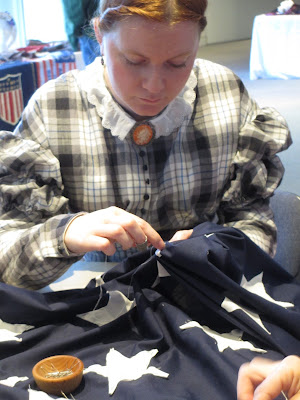 At 2:00 on Sunday we were to present the flag to President Lincoln.  Before we knew it, it was time to fold up the flag for the presentation. 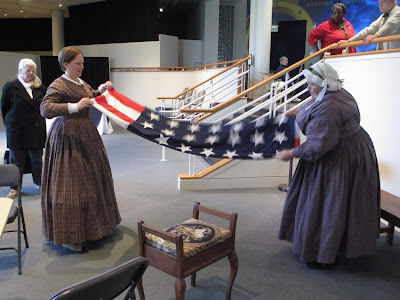 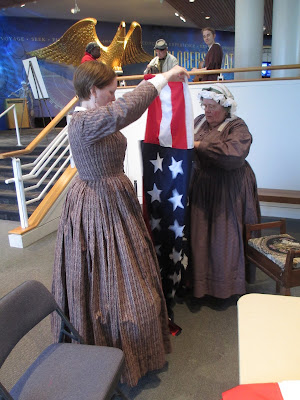 He then gave a speech to the assembled public: 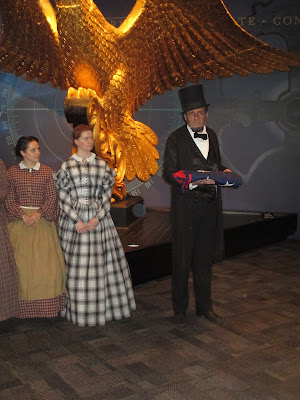 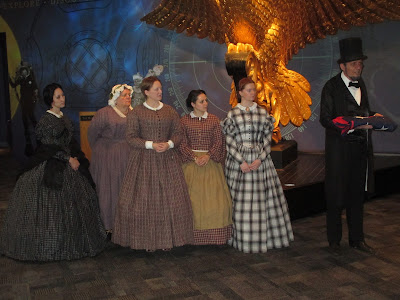 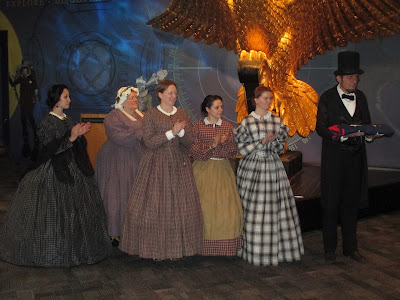 And then posed for (about a thousand) more photographs:

I have more pictures of my Facebook page, as well.  And soon I'll do a post on other aspects of the weekend.  This post is long enough already.  :p
Posted by Chelsea at 11:50 AM