So what happens when your parents move out of the house they've lived for 30 years?  Turns out, they give you a lot of random stuff!  Some of this stuff can be useful for costuming... if you're resourceful.  Take this old dust ruffle, for example:

It has a beautifully pleated ruffle around three sides, which means I *have* to use it for something... right?  Something ruffly, something fun, something a little bit ostentatious - I got it!  How about a Victorian bustle skirt with a train?

Perfect.  This will take hardly any work at all.  :)

WARNING:  This project was very make-it-up-as-you-go and therefore may be hard to follow/recreate, but sometimes that's how I work best.

First, I measured from my waist to the floor and added what I considered to be a decent length for a short train.  (In the bridal industry, it would be called a "court" train.)  I measured that distance up from the bottom of the short ruffle shown at the top of the above picture, and marked a short line across the middle of the white area.  The ruler halfway down the side is measuring the exact halfway point of the white part.

I then stay-stitched along this line two or three times to reinforce it. 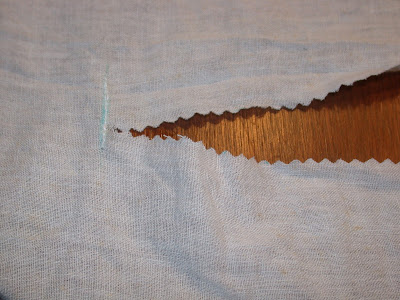 Using my pinking shears, I cut down the center until I got to the stay-stitched line, so imagine this: 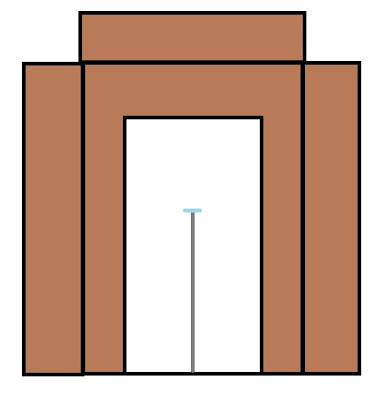 That gray line is where I cut.  Then I folded the whole thing along the line I had just cut, and sewed up the two ends that were once the bottom line of the drawing.  This makes the center front seam of my new skirt.

With me so far? 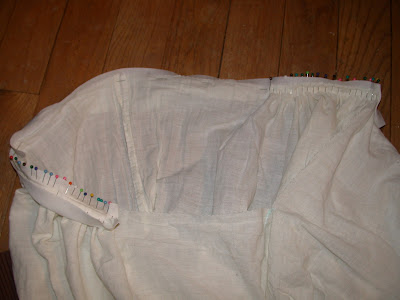 Now I had a circle where there was once a long slit.  Starting approximately where my hip bones would end up when I wear the skirt, I pinned knife pleats pointing away from the center front, and pinned the whole thing to my bias tape waistband.

I left a good eight inches on either side of the end of the slit (where my cutting line met the reinforced mark from the first step) out of the waistband, and instead gave that extra bit its own drawstring.  I added ribbon ties to the ends of the waistband, and voila - a finished costume piece in less than a day!

How about some pics on my trusty dress form?


Obviously this is meant to be an underskirt, with only the bottom brown ruffle showing on the finished costume.  And I'll need a proper bustle at some point.  My dress form is wearing the skirt over one of my roommate's pillows. 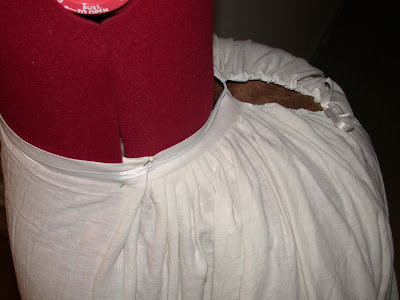 I was inspired by 18th Century petticoats in their construction that allows them to be worn over smaller or larger side panniers.  I adapted the technique to make the back of my skirt adjustable for different-sized bustles! 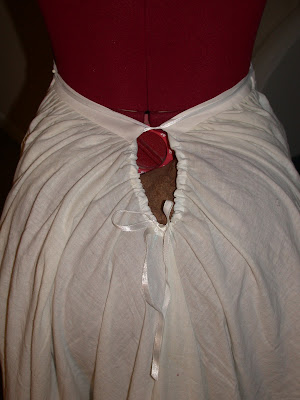 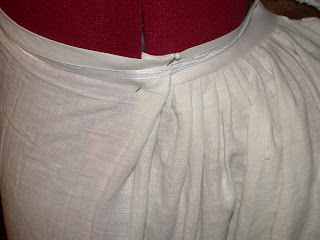 I slightly miscalculated the length of the bias tape for my waistband, and it was too large.  I solved this temporarily by tucking and pinning it on either side.  This will be fixed permanently before I wear it as a costume. 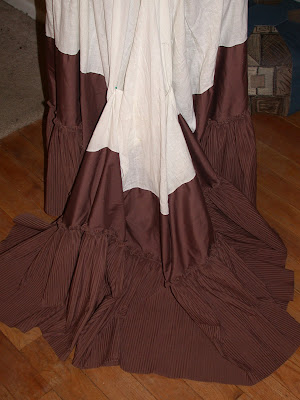 I also pinned up the sides in the back, playing with the train to make it fall a little nicer.  I might add some ties to make it adjustable, in the future.

Looking through the other hidden treasures recovered from my parents' old house, I anticipate several upcoming projects and blog posts featuring them.  Stay tuned!
Posted by Chelsea at 7:53 PM